A week or so ago, there was an article on the Crits Kill People blog (which is a really good source of Batman Miniatures Game related articles) commenting on the apparent lack of online articles about the game. This got me thinking about what I could do to contribute.

Since I began my Batman project, I've been documenting my miniature painting and terrain building, but although I'm happy with what I've done, I'm not kidding myself that there's anything immensely inspiring about my work. I've also been writing some game reports, and a tournament report, that have been well received, but are limited by the games I'm playing and events I'm attending.

I've always been wary of writing tactics articles, because even though I'm now technically one of the top ten Batman players in the country by virtue of attending the first tournament for the game, I'd still feel awkward setting myself up as some kind of expert.

So finally I turned to the spirit in which I first created this blog; keeping costs down. Perhaps the major criticism I've heard of this game is the relatively high cost of the miniatures in relation to other manufacturers. I know that there's a license, and they are high quality sculpts, but £13 for a single model can, and does, put people off buying in to the game. This problem can be exacerbated when people realise that there are multiple versions of different characters available.

Therefore, to address this issue, this is the first in a series of articles designed to help new players who are working with a budget decide which of the different versions to purchase based on something other than "which one do I like the look of?" The goal of these articles will be to discuss the way that these models work in the game, leading to a recommendation of which to buy if a player is only going to buy one version.

So, without further ado...

There are currently two versions of Joker's main squeeze available in the game. 'Arkham Harley' appears in the costume Harley Quinn adopts in the Arkham City console game, armed with her trust baseball bat. 'Classic Harley' (a.k.a. 'Fanservice Harley') is dressed in Harley Quinn's more traditional getup, and is posed leaning (somewhat provocatively) on a huge mallet. Both models are available in single blister packs and retail at the same price.

Both models are from the Joker crew (naturally) and both have the True Love: Joker trait, which grants Harley extra Willpower and an extra pip in  Attack if Joker falls casualty. Essentially, this means that both work equally well when paired with the Joker in your crew build.

There are two major differences between the Harleys in terms building your crew. Firstly, there is a difference in points cost. Arkham Harley costs 61 reputation points, whilst Classic Harley costs 75 reputation points. Although a small difference, 14 points is enough to hire an additional henchman for the crew when you use Arkham Harley. This is actually quite significant which will become apparent later when discussing the role these two characters play later in the article.

Although an extra henchman is useful, the ability to use one model for more than one crew is always going score points in a Cheaphammer article. So for that reason, round one goes to Classic Harley.

With a Movement stat of 4 and the Acrobat trait granting faster movement and the ability to pass obstacles and difficult ground more easily, whichever version of Harley you buy, she will be able to get where you want her to go in a hurry.

However, with the Fast trait, Classic Harley is able to re-roll the dice for additional movement that come from spending MC. This guarantees (to some extent) faster movement than Arkham Harley. Round 2 goes to Classic Harley.

On first glance, combat is another area that seems to be in Classic Harley's favour. Although both characters are armed with weapons that inflict two stun damage and have the Tough/Heavy trait that increases Harley's Strength to 4+, the fact that Classic Harley has an Attack skill of 4 compared to Arkham Harley's 3 seems to seal the deal.

However, a closer look reveals a couple of significant details that, in my opinion change things significantly. Classic Harley has 360 degree strike, Reach and Push, which means that she has the potential to leap into the centre of an enemy crew, and with the right application of counters, send the enemy flying, inflicting damage to several enemy models at once. She also has Distract, which can reduce a specific opponent's Defence by -1.

Arkham Harley, on the other hand, has Technique, which allows you to increase the probability of knocking the enemy down and making them vulnerable to the rest of your gang, and Handy (in my view, one of the best traits in the game) which allows you to re-roll attack rolls.

Classic Harley's combat skills are potentially very effective, but quite situational (and avoidable by a canny opponent) and Distract is a skill that is in plentiful supply elsewhere in the Joker Crew. What's more, without re-rolls, she's more vulnerable to bad dice and this could be bad news if you've run her into the centre of the enemy crew. Arkham Harley, although less dangerous, is more reliable and precise in her attacks. Re-rolled attacks with Technique have the potential to put even a heavy-hitter like Batman on his back and at the mercy of the rest of the crew, which could be devastating.

For me, smaller potential damage output is more than countered by reliability and the ability to take down more powerful opponents, so round 3 goes to Arkham Harley.

Again, raw stats point to Classic Harley as being the better defensively. Both have a Defence stat of 4, but Classic Harley has an Endurance of 7 to Arkham Harley's 6, making her marginally more survivable. However, with the only defensive trait either model has being Acrobat (allowing them to dodge shooting attacks), neither model is ideal for a prolonged slugfest (which is another points in favour of Arkham Harley being better in combat - she's more likely to put her opponents down), so you need to be careful how and where you commit either Harley to combat.

Even though there's not much between them, that extra point of Endurance could be crucial, and so round 4 goes to Classic Harley.

Both versions of Harley Quinn have some interesting skills which reflect her role as Joker's second-in-command and her annoying and diversionary nature.

Classic Harley is able to use Discourage to reduce an opponent's Willpower (and therefore the number of Action Counters they have) during the Raise the Plan phase of a turn to reduce their effectiveness. Arkham Harley has Disarray, which allows her to move 2 counters on an opponent's card, potentially negating their ability to do something crucial (like shooting for example). I personally prefer this skill to the apparently more powerful Discourage, as it is more precise and can ruin the opponent's plan, rather than just reducing the scope of what the opponent plans. However, it is worth noting that Disarray is almost useless against another Joker crew.

In addition, Arkham Harley comes with the Follow Me! trait, which allows her to give out additional MC to nearby Henchmen (of which there are likely to be more in a crew that includes her), combating one of the few weaknesses the Joker crew suffers from - lack of Action Counters.

For her ability to weaken the enemy, whilst also strengthen her allies, round 5 goes to Arkham Harley.

Overview: If You Only Buy One...

The results are in, and with the score at 3-2, the decision is clear. Cheaphammer recommends Classic Harley.

Classic Harley is faster, tougher and more versatile in terms the crews you can use her with than Arkham Harley, and when you're learning the game, she's more suitable for being used independently (which suits a Poison Ivy crew, where she won't have many allies). To my mind, she operates best as an objective grabber (she has the speed to get anywhere on the board) and opportunist - looking for clusters of the enemy to 360 Degree Strike and Push or the right target to Discourage and Distract. Her versatility is her strength.

Arkham Harley was only narrowly beaten, but she is a narrower character. She shines if you are going for a Henchmen heavy build for you Joker crew. She gives you more points to play with for your crew, Follow Me! gives those henchmen more tokens to use, Disarray protects the gang from dangerous shooters and Handy and Technique allow her to set up tougher enemy characters for the Henchmen to swamp. She's at her best when activated early in the turn, allowing her to set up opportunities for others to exploit.

If you know that you want the build a Joker crew with lots of Henchmen to take advantages of Joker's Chaos Agent ability, then Arkham Harley may be the best fit for your build. However, for each Elite Clown, Titan Clown or Free Agent you hire (or if you're considering a Poison Ivy build), then Classic Harley becomes more and more favourable in comparison. 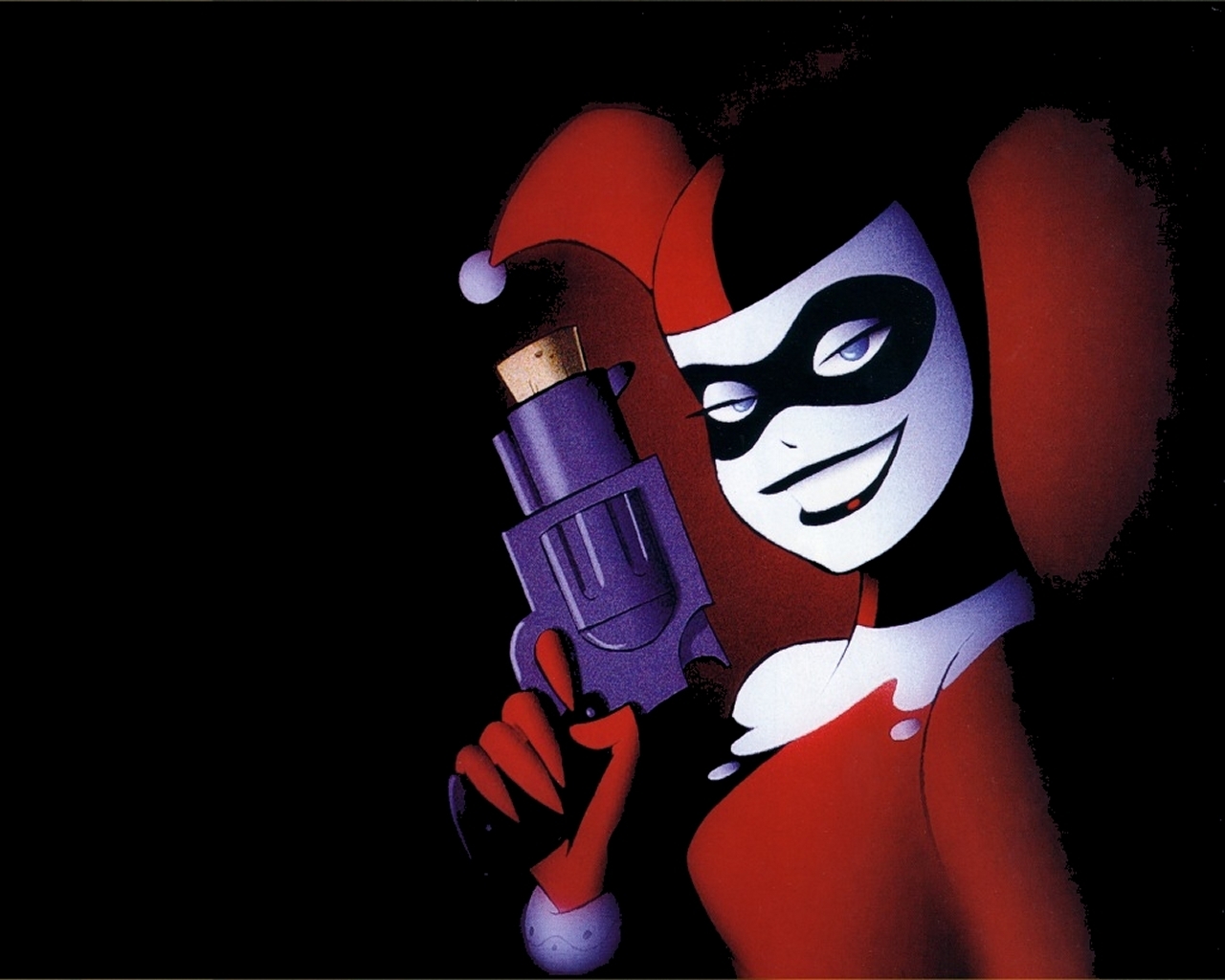 I hope that you've found this article useful. If you think I've missed anything, or disagree, please feel free to add your comments, suggestions and thoughts.

Hopefully, I'll be doing more of the articles to offer more suggestions of which version of a model offers most bang for its buck.
Posted by Kieron at 08:03