As previously advertised, today I went to participate in the first Batman Miniatures Game tournament in the UK. It was held at Titan Games in Lichfield and was, quite frankly loads of fun.

Due to the limitations of my slightly cheaphammered collection of miniatures, the crew that I took was somewhat unorthodox, eschewing a leader in favour of a Joker crew led not by the Clown Prince of Crime, but rather his main squeeze and chief henchwench, Harley Quinn. 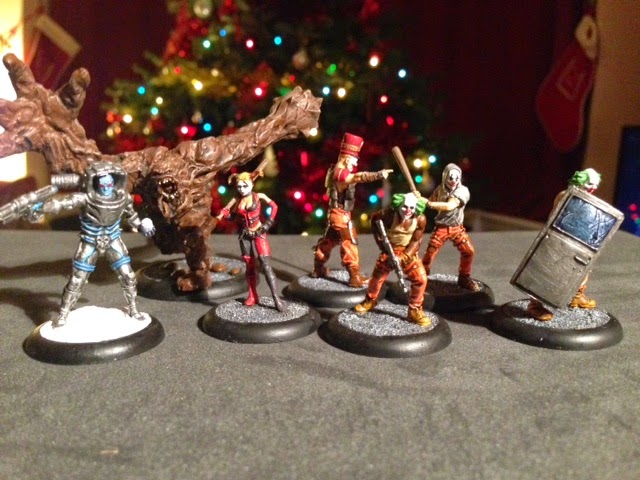 The official rundown of my crew was as follows:

My plan was to run Harley and the majority of the clowns together as a mob, to swarm opponents and grab objectives. Meanwhile, Sniggering would find a vantage point to unleash a hail of bullets at targets that presented themselves, while Clayface would get up close and personal. Mr Freeze would head off on his own quest for his personal loot, shooting icy blasts as he went.

So, I had the models, I had a plan, I had even printed off a crib sheet just for the gang.

Unfortunately I had the times wrong, but only ended up arriving about half an hour late following some rather reckless driving.

Upon arrival I was greeted by the sight of some very well prepared boards as Titan Games had gone the extra mile with their terrain. 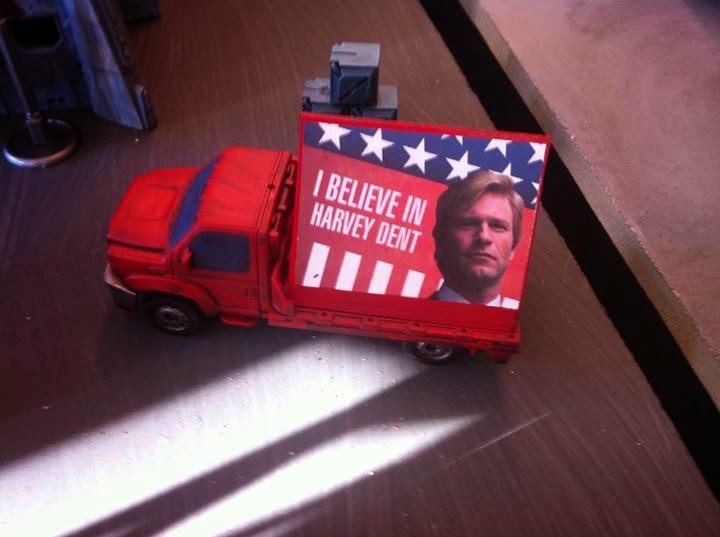 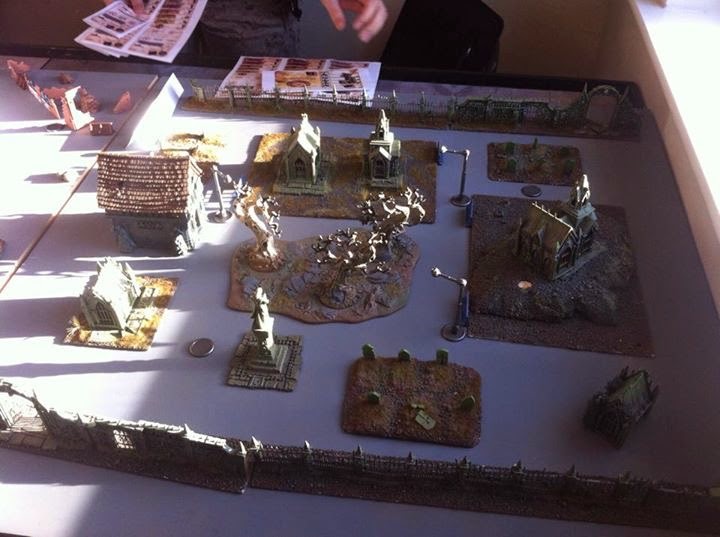 Some folk had also gone the extra mile with their outfits, although almost everyone was attired in batman themed t-shirts, one or two outfits stood out. 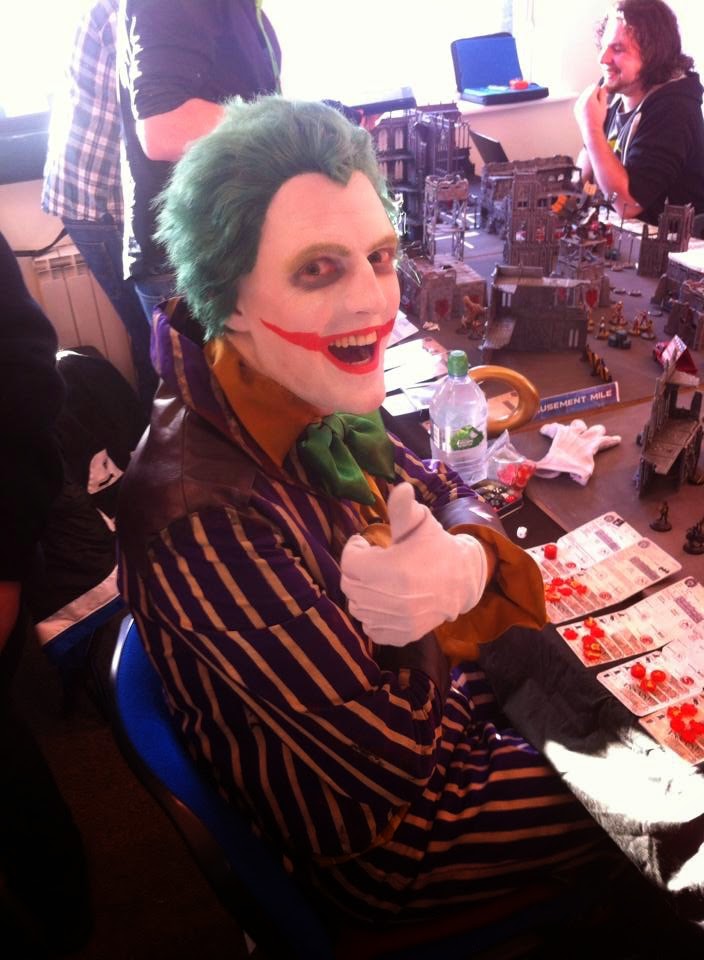 As round one was well underway, I was unable to get involved, but I did manage to grab a brief friendly skirmish against Dan, who was running the event. I was particularly pleased about this because I'd mainly attended to properly learn the game rules and an extra game would help with this. What's more it was nice to catch up with Dan who I'd attended some very small Star Wars Miniatures Game tournament with several years ago.

Dan put together a quick crew which was a little short on points and equipment that looked rather familiar: 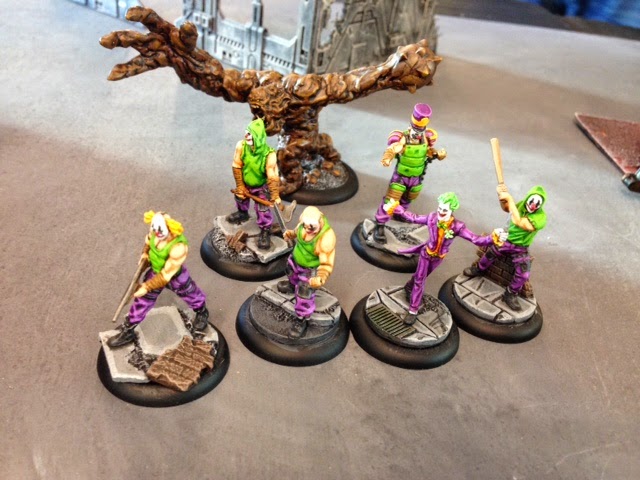 We decided that we were playing a lover's quarrel at Joker's HQ in which two different Clayfaces (Matt Hagen and Basil Karlo) had taken sides.

Although we only managed to only get three turns in, in that time, my Sniggering and Clayface had unleashed hell on Dan's Clayface and took him out of the game in just two turns. Dan managed to miss with Joker's one shot gun, and thanks to a bit more dice imbalance, by the time we finished, my Clayface was beginning to make a mess of Mr J. 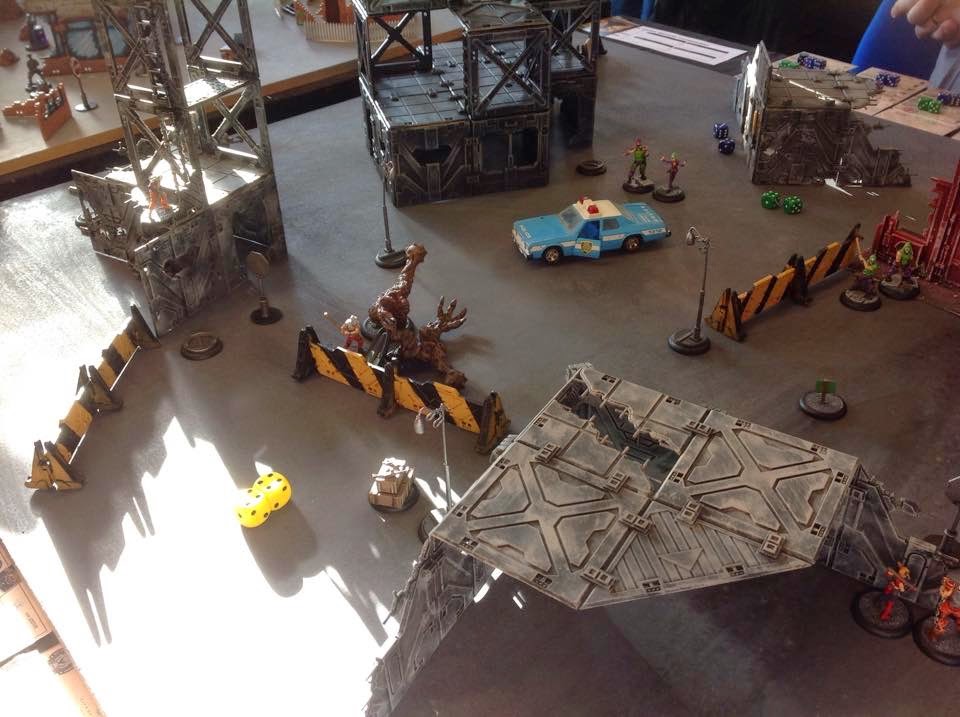 It was a fun intro to the day, and I really appreciated Dan giving me even half a game as it allowed me to get on top of the rules of my crew, and therefore sped up my later games.

Despite Dan's abysmal luck, my first round game was recorded as a minor loss, which I considered more than fair given my massive screw up.

After lunch, and being advised by a parking attendant not to bother paying for too long in the car park because they were all knocking off early for the Christmas party, it was time for round two.

My round two opponent was Pete, who some gamers might recognise as a regular contributor to Flashback Generations excellent YouTube videos on the Batman Miniatures Game.

Pete was also packing a Joker crew that leaned heavily on the henchmen. 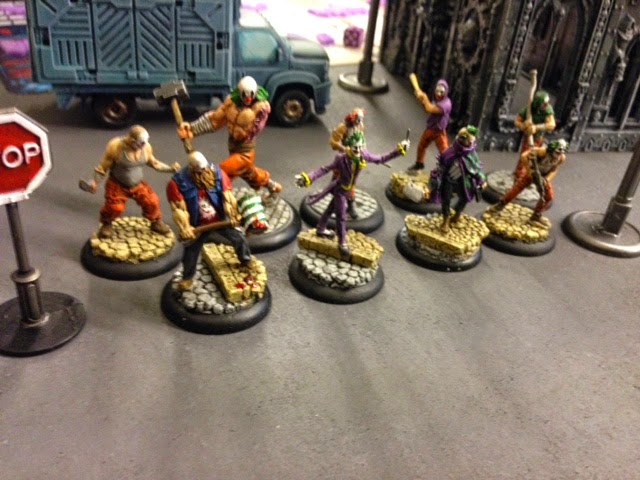 The scenario was patrol, in which there are bonus points for getting into the enemy's deployment zone. I developed a plan which involved sending Clayface on an end run, whilst the rest of the crew grabbed some objectives and held on against the onrushing hordes. 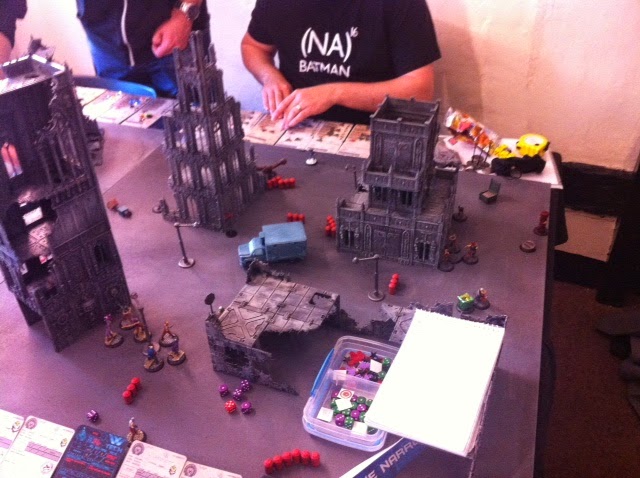 Pete made straight for my outnumbered clowns and despite hunkering down as wee as she could, Harley Quinn was eventually taken down. However, my fighting retreat worked as I managed to keep Petes crew away from his objectives and my shield Clown grabbed a loot objective and hauled it back away from danger.

Meanwhile, on the other side of the board, Clayface advanced unopposed, grabbing a loot objective on the way and hauling it all the way to the far end of the table where he dropped it in favour sitting on an Ammo crate for more VP's. Freeze and Sniggering also managed to double team one of Pete's clowns with a hail of gunfire, although they couldn't quite do the same to Asker the Elite Clown.

In the end, I think the score was 13-9 to me, which in the tournament rules counted as a draw. That's how the game felt. It was a cagey affair where I deliberately held off from combat as I'd sent a third of my force off by himself.

My third round game was against Tom's Green Arrow crew: 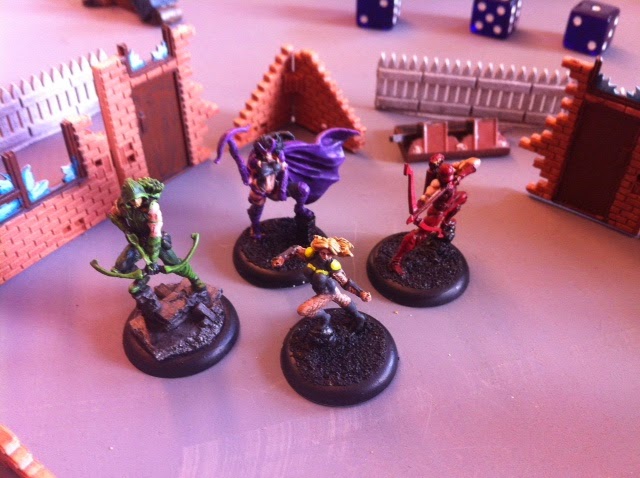 It was nice not to to be up against a Joker crew (no disrespect to the others, but I was glad to be facing non-Tricksters). This game was loads of fun. Right from the off, Harley Quinn began to cause chaos with the archers  with her Disarray ability. Sniggering found himself being hunted down by the Green Arrow, and sure enough he fell, but not before he'd managed to land three blood damage on to Speedy. 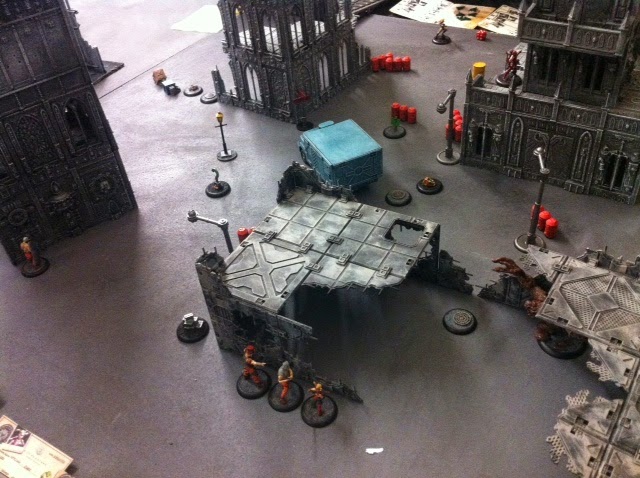 Mr Freeze went off after Canary, who'd snaffled some loot, but was stranded in the open by her Canary Call and found himself the target of numerous shots from Green Arrow and Speedy. He survived however, largely due to his excellent (an possibly cheesy) armour rules. 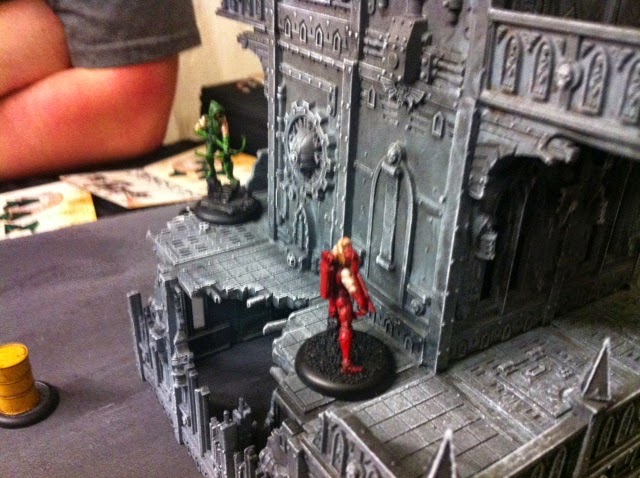 Clayface and Harley double-teamed Huntress, knocking her out for most of the game and then climbed a wall to go after Speedy. This initially went badly when Speedy proved why giving him Charge was a good idea by pushing Clayface off a building (which it's just occurred to me he couldn't have done because Clayface is big...ah well, it was funny). However, they eventually knocked him out as well.

Despite all this action, my MVP's were my clowns, who solved two Riddles, grabbed a Loot objective and a Titan Container and denied Green Arrow points from an Ammo Crate by contesting it.

The final score was 14-7 (I think) and a narrow victory to me. It was interesting that Tom had enough spare reputation to include a Police henchman, and this might have tipped the balance, grabbing some objectives before I could have done, making it at least a draw.

The different styles of these gangs made for a thrill packed game.

So, with a win, a draw and a loss on my record, I came in sixth. The winner was Sai Harris, also from Flashback Generations, who was apparently doing some evil things with his Watchmen. I didn't any of his games, but his opponents all seemed to leave their games looking like they'd been deconstructed, in much the same manner that Alan Moore did to the superhero genre.

Everyone was given an alternative character card for Talia al Ghul, simply for turning up. There was also a whole host of blister packs available as prizes that had been donated by Knight Models. Again, everyone was able to walk away with new miniatures, the top two got crew packs and the winner was awarded a 70mm Batman. The last placed player also received a 70mm Joker.

For my pains, I picked up an Arkham Origins Batman, which, as an official model, will now allow me to run a Batman crew at the next event. Good times. 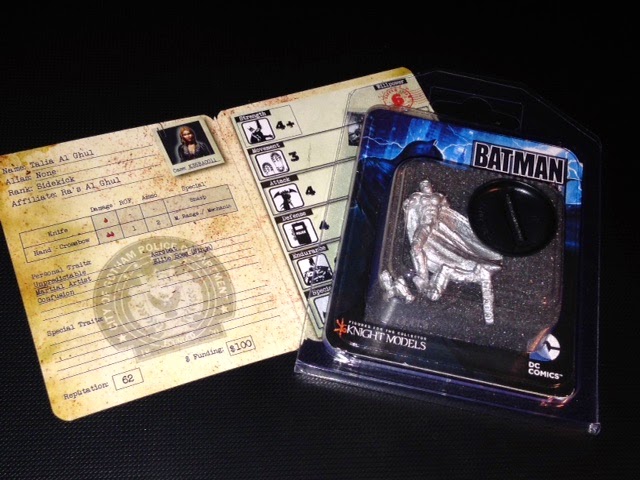 So, what have I learned?

1) I know the rules better than I thought and was able to clarify areas I was unclear about. I can now go back to my regular opponents and admit to all of my mistakes.

2) In this game, I think it's important to play the scenario and objectives rather than the fight. Most of my points came from objectives, and they're much easier to achieve than taking characters out.

3) You need to concentrate attacks to score points off enemy models. Keep your eye on the damage you've inflicted. I let Speedy off the hook at the end of my final game. I went after Huntress, rather than Speedy, who I had more chance of removing as a casualty for more VP's.

4) Harley Quinn is awesome at messing with shooters. Her Disarray ability can shut down enemy shooting extremely well. However, the skill is useless against the Joker.

5) Clayface and Mr Freeze are a really good combo for points denial. They are both really tough and difficult to take down. They can do significant damage if left alone, but can take a lot of punishment. They draw a lot of heat away from the more vulnerable henchmen.

All in all, a great day. Really well organised, really nice people, really good games. Thanks to Dan and Titan Games for running the event, and thanks to Knight Models for supporting it. Well played!