Guildball requires six players on a full team, and I now have that. I've completed the final two players on my kit-bashed Mortician's Guild team: Cosset and Casket. That means I can now start playing games and losing badly. 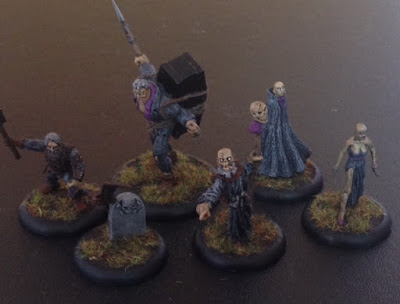 Cosset is a screaming banshee of a player, able to attack without spending influence and able to take damage to increase her attack potential. For this model I used a Wargames Factory Zombie Vixen body with arms taken from the Wargames Factory Female Survivors sprue. Wargames Factory's kits are really versatile, but the heads lack definition, and so I used a metal head from a Crossover Miniatures superhero model. I think it's meant to be a female version of Vision from the Avengers, but I feel that it give my Cosset a creepy porcelain doll feel. 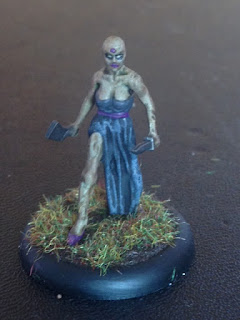 My final player is a bigger guy, built for endurance and obstruction. Casket has the fun ability to trap enemy player in the coffin he carries about, and so it wasn't optional about whether I gave the model his unusual backpack. 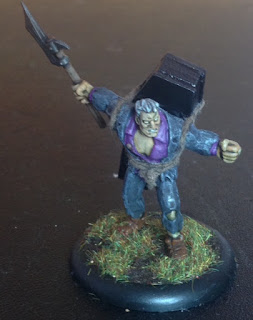 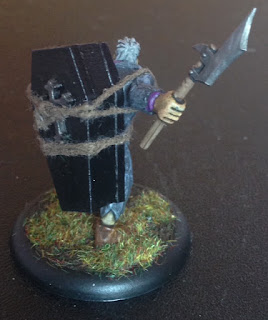 The base model is a Heroclix Solomon Grundy that I'd been planning to turn into a tank zombie. A simple weapon swap was easy enough to do, and the coffin was the last thing I bought before the beginning of the Mountain Reduction Challenge, in a pack of four from Warbases. The most difficult part of the model was solving how I was going to secure the coffin to his back.  I settled on actually using painted string, an idea that came from my five-year-old daughter, and frankly, it was better than anything that I could come up with. I like it.

So that's my Mortician's Guild team finished. I've even printed out the game cards and am ready to play. However, my goal was to make two teams and, as I'll detail in my next post, the plan to do the Mason's Guild has hit problems, the solutions to which have called on some heavy duty lateral thinking. 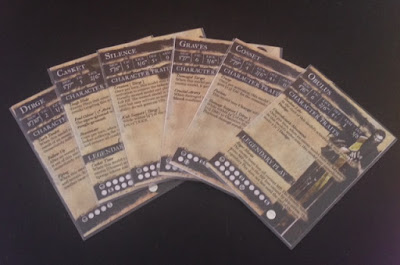