It's coming up to the end of the month and I've finished of my Union team with the team captain, Blackheart, the team mascot, Coin, and the team hatchet-man (literally), Rage. For these three I needed to get a bit more creative than with the previous repaints and hand swaps, and despite some reservations I'm quite pleased with my work. 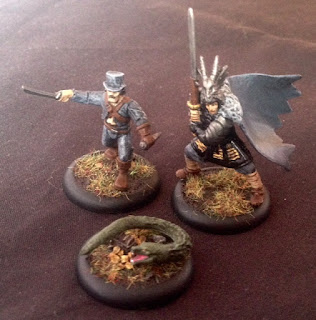 This is not the model I originally planned to use. I'd orginally intended to build Blackheart from an ancient Citadel miniature, Lord Aquila. However, when I got him out of the deep recesses of the bits box I found that a smidge of scale creep had happened and he was now a midget. Therefore I returned to the bits box to see what I could find and the best I could do was a Wizards of the Coast D&D Red Dragon Samurai (no, I don't know what one of those is either).

I quite like the helmet, but the rest of the mode was somewhat flat and featureless. What's more that sword had some kind of dodgy flame effect, so that needed to go. However, I managed to cover up some of the dullest elements of the model by adding a cloak from a Heroclix Robin model. I'm particularly pleased with the fur collar I manage to sculpt out of 'blue stuff' onto the cloak to cover the join.

Overall, I'm pleased that I've managed to make a model that I really didn't like into something useable that I wouldn't be too embarrassed to use in public. 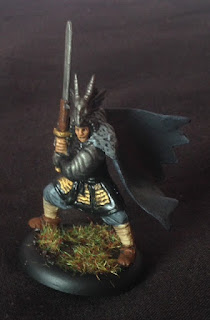 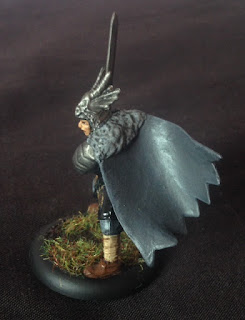 The mascot probably present the biggest obstacle to cheaphammering Guildball. The Union's mascot is a snake with a distended belly due to Blackheart feeding it his gold. Not having a snake to hand, I got creative and joined the head and tail of a Heroclix Lizard (as in Spider-man) model. Sadly, the picture reveals part of the join that I hadn't noticed, but I'm still happy with my creation.

I'm perhaps most pleased with the treasure pile, which was made from a Bretonnian chest and some coins I made by cutting some plastic rod. It's a technique I may use to improve my Batman loot counters. 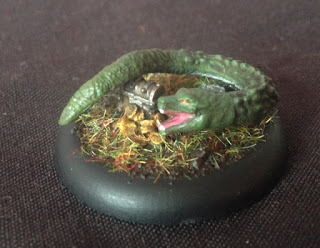 Rage is a player who seems to be wholly focused on  damaging the opposition. He is a loner who can't gain benefits from working in conjunction with his teammates. The official model is clearly based on Daniel Day-Lewis' character from 'The Gangs of New York', and I felt it important for character recognition that mine also had a top hat.

Fortunately, I had a War of 1812 militiaman I wasn't planning to use and so a simple head swap onto a model made from the old Empire Free Company box from GW mad a suitable model for Rage. I also added a different hand and weapon to sword the model originally had. 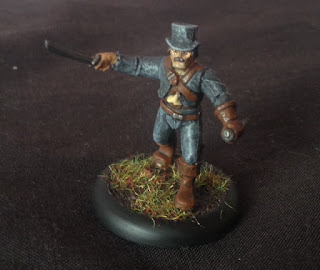 So that's the Union team complete. I'm not as happy with them as I am the Mortician's, but that's largely because they were a last minute solution to realising that I couldn't really do a Masons team. They're good enough to allow me to begin to play games with my friends, and perhaps tempt them into the game. 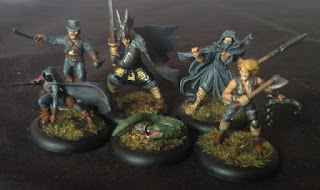 What's more, both Rage and Mist are eligible to play for the Morticians, allowing me to mix up my line up in games against people who already play the game.

So with 12 models and two teams created I'm going to claim my first joker from #6MMRPC for completing a project, and a bundle of previous unused models have been removed from the lead pile. I probably need to create a ball and some goals at some point, and I need to get round to printing out the Union cards, but those were never in my targets for the month.

In terms of next month, I'm not sure what I'm going to work on yet, and next week's post will provide details and the 'before' pictures for my next project. I'm torn between finishing off my Flames of War Americans, putting together a either a Native Warband or a US War of 1812 force for Muskets & Tomahawks, or returning to some Batman miniatures.