I’m getting in early with this week’s offering for He-Month, and given that He-Man received support in the form of Ram-Man last week, Skeletor, being the dastardly fellow that he is, has decided to up the ante. 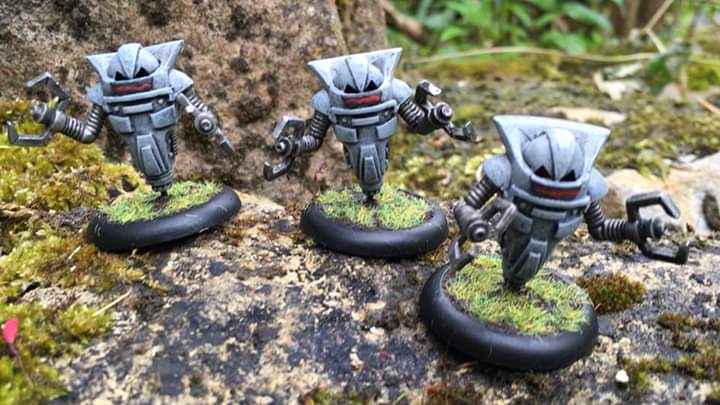 These chaps are from Killer B games and needed a little bit of work to remove a crest that the models had. However, this was easy enough to achieve with a good dose of clipping and filing.

Technically, to be more accurate to the cartoons, I should also have removed the ‘collar’ too, but that would have been a much more problematic job, and not really worth the effort for what are essentially cannon fodder.

In terms of painting, these were don’t with base colours, washes and dry brushing grey and silver and took very little time to do.

Ultimately, I’m pretty happy and they make a good fist of looking the part.

Arguably, they are a little large, but the Filmation cartoons, as cheap animation often is, were fairly inconsistent on the size of these things and so I’m not worried. I’ve also neglected to give them yellow eyes as the models just have holes for eyes, so I wasn’t sure how I’d do the yellow. I think they look fine.

In game terms, although I haven’t actually made a card for the Hover Robots yet, these are going to be the weakest characters I’ve designed so far, and rightly so, as when they did turn up in the cartoons, they would get wrecked by He-Man and chums with wanting abandon. However, sheer numbers should give the good guys pause for thought.

You may have noticed that I was slightly isolated in celebrating He-Month last week. This was unsurprising, as with the weekend being right at the start of the month, the other participants were fairly open about not meeting last week’s goal.

I’m hoping to have more to share with you by the end of the weekend.
Posted by Kieron at 09:32