But not in a Cisqo way...
For this post we're returning to the emerging struggle for Sheffield in another installment of 7TVBCW, and this time we broke out the big guns. 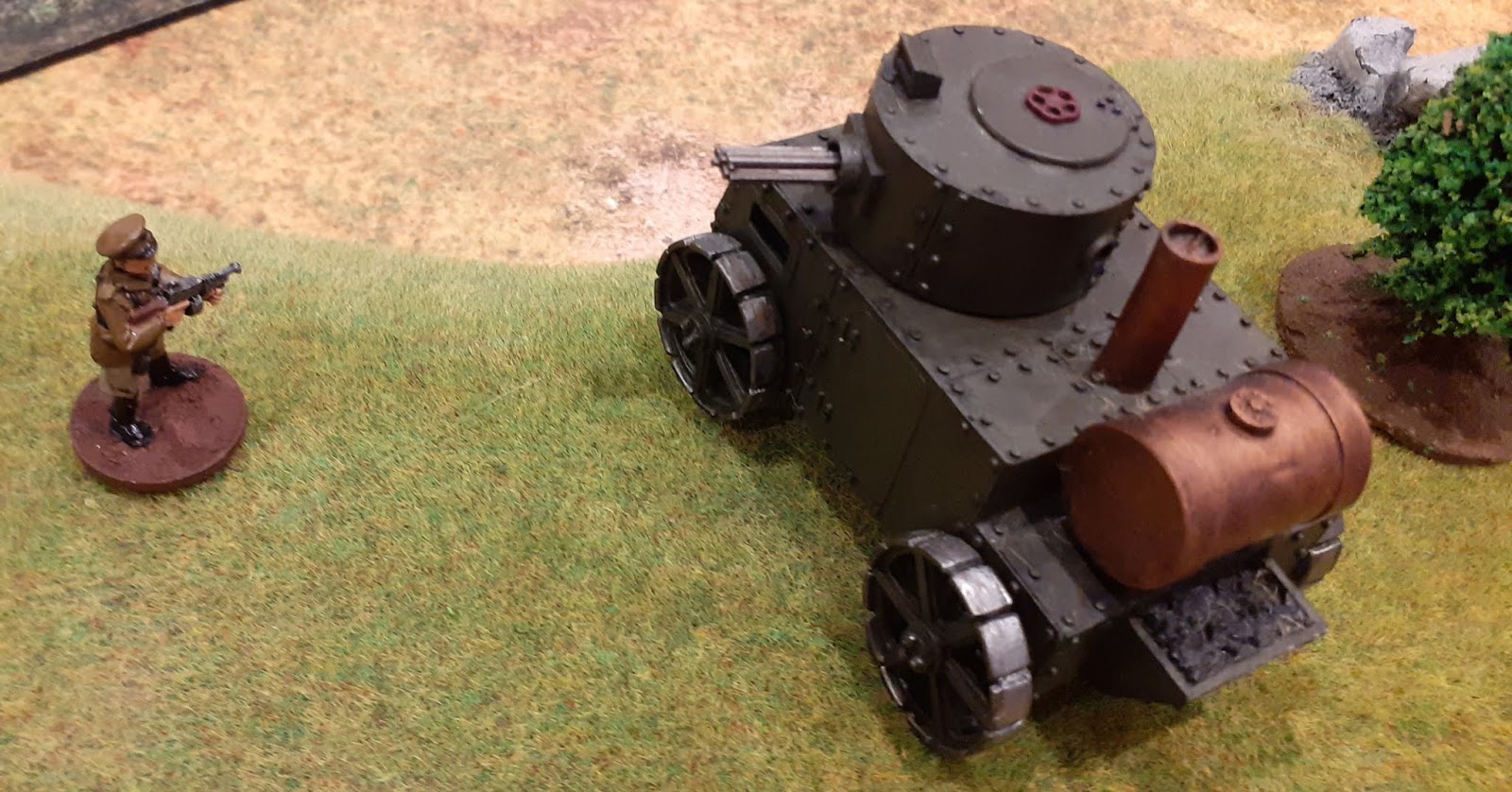 Whilst the BUF and Swallownest Socialists fought to determine the fate of George Orwell, the Handsworth Volunteers, part of the patchwork of militia that had declared the People's Republic of South Yorkshire, had received intelligence that royalist forces gathering near Wortley had developed a new weapon that might tip the scales against the numerically superior left-wingers in the region. Therefore they detached a scouting force of Great War veterans to Wortley to gather intelligence:

Rugged Veteran
Spiritual Custodian
Soldier of Fortune
VIP
Army Officer
Army Sergeant
5 Army Privates
Truck (Running Board, Twin- Machine Guns)
They were successful in discovering that the royalist militia in Wortley had constructed a prototype steam-tank they had nicknamed the Dragon after a local legend. However, the Handsworth men were discovered and found their escape route blocked by the a small force of well-armed Wortley folk and the imposing form of the heavily armoured Dragon, belching fire and smoke. 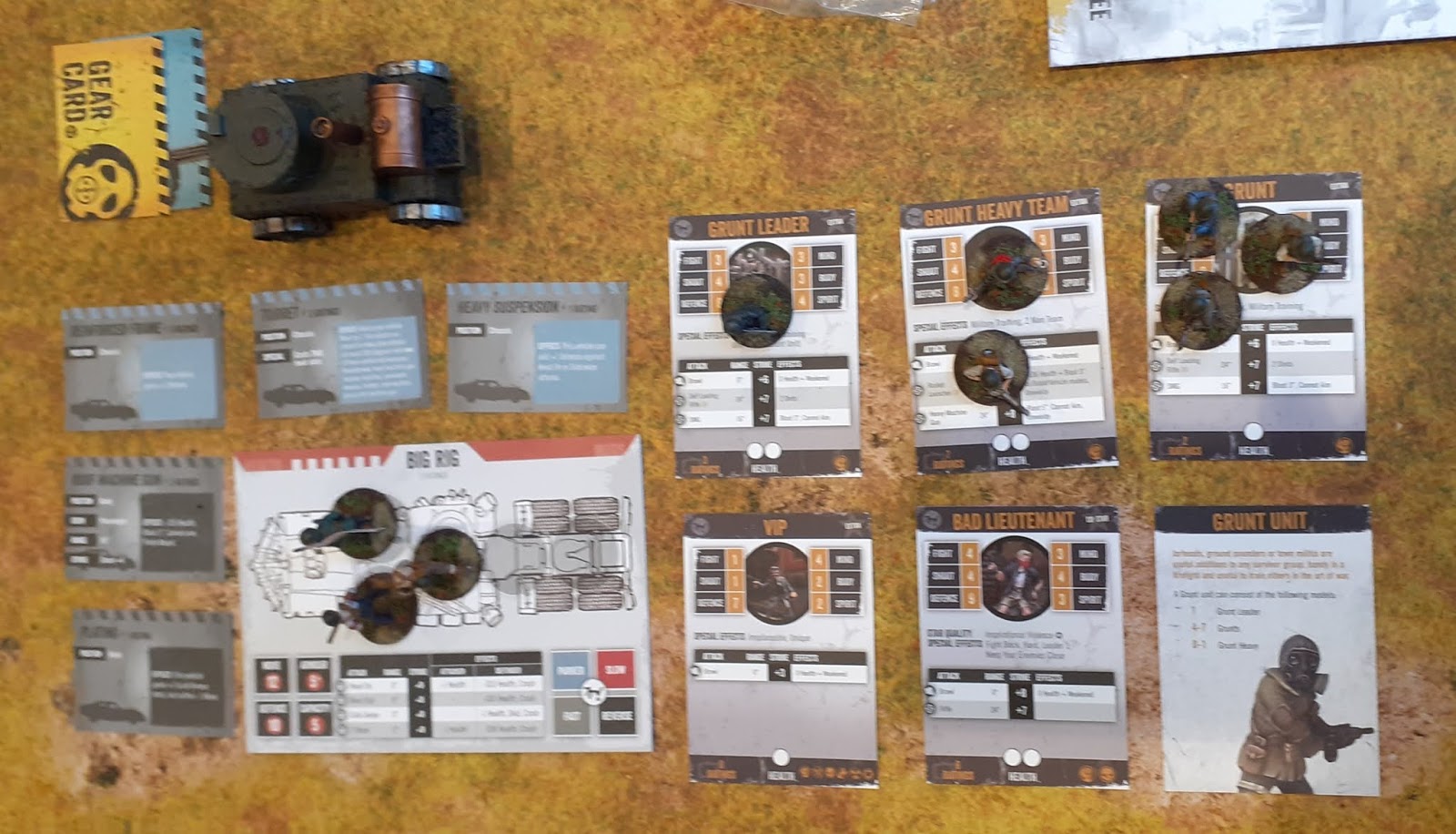 Aware of the firepower arrayed against them, and knowing that the People's Republic needed to know what they were up against, the Handsworth commander divided his force into three groups. One team would make their way cautiously through the cover of the old ruined mill. Another would mount up in the SICKLE (the Siege Insertion Carrier with Knight's Lance Entry) and attempt to use speed to break free. 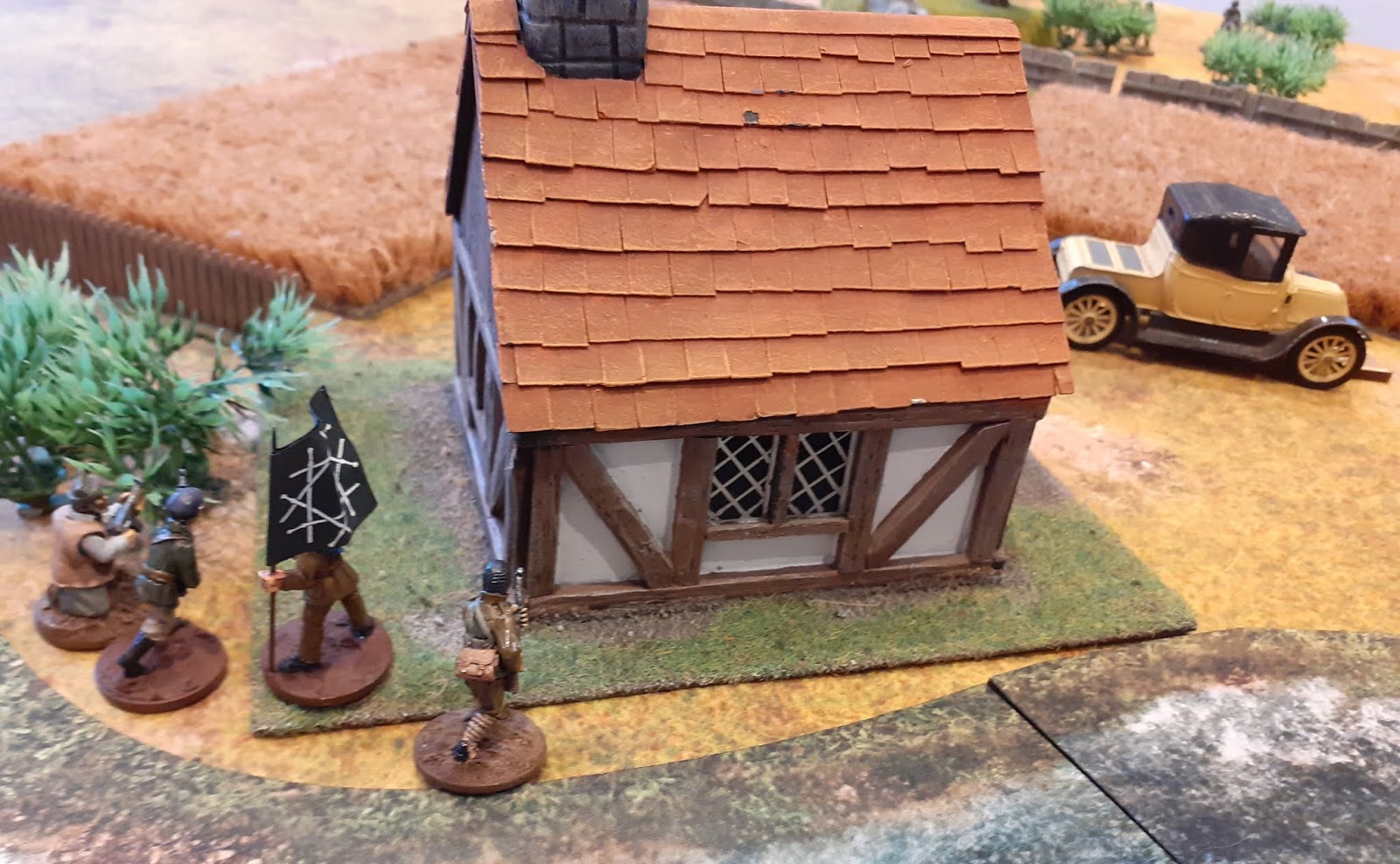 The final team would make their way through the farm and across the fields, keeping their heads low. 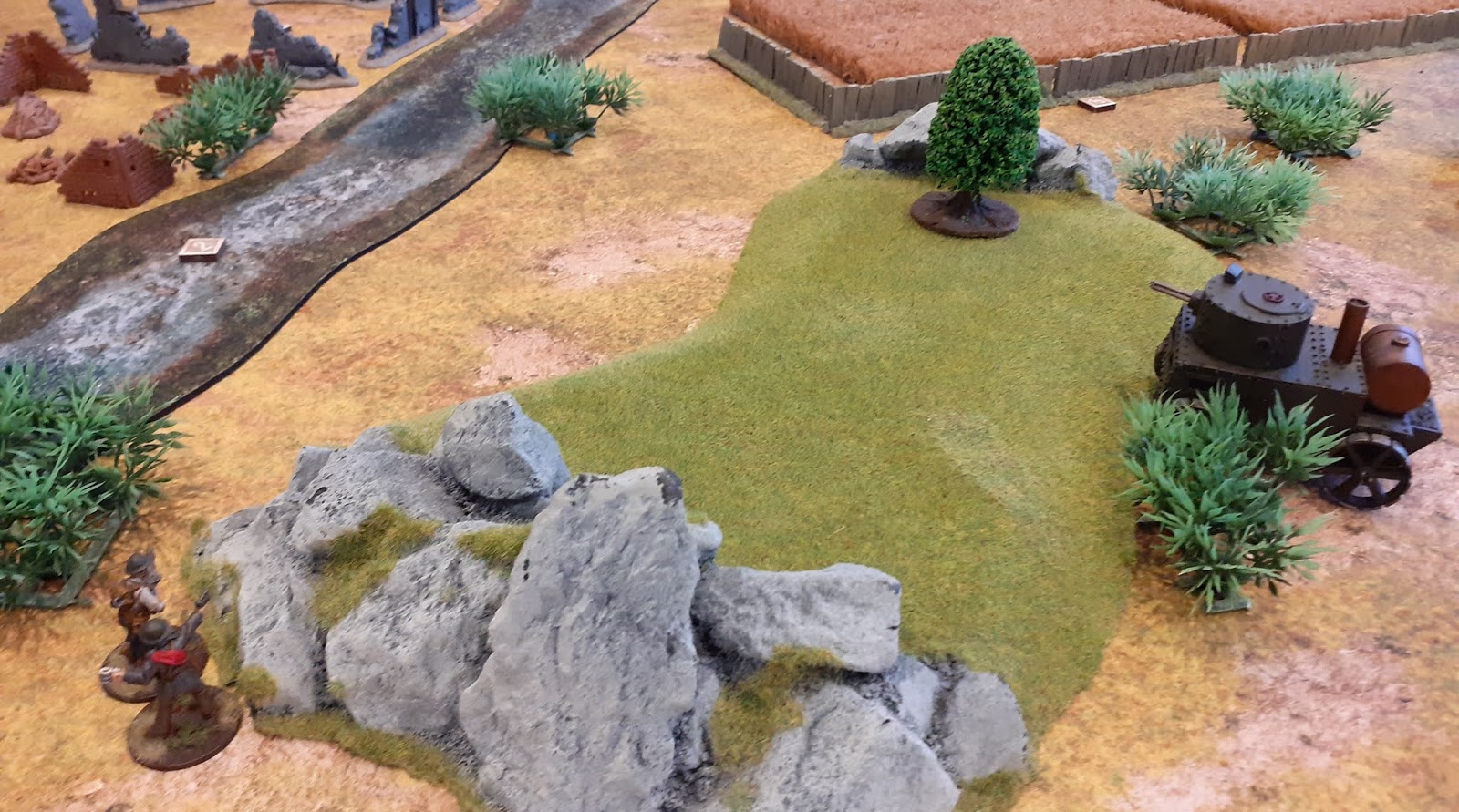 However the Dragon and the Lewis Gun team waited patiently for their quarry to move into view. 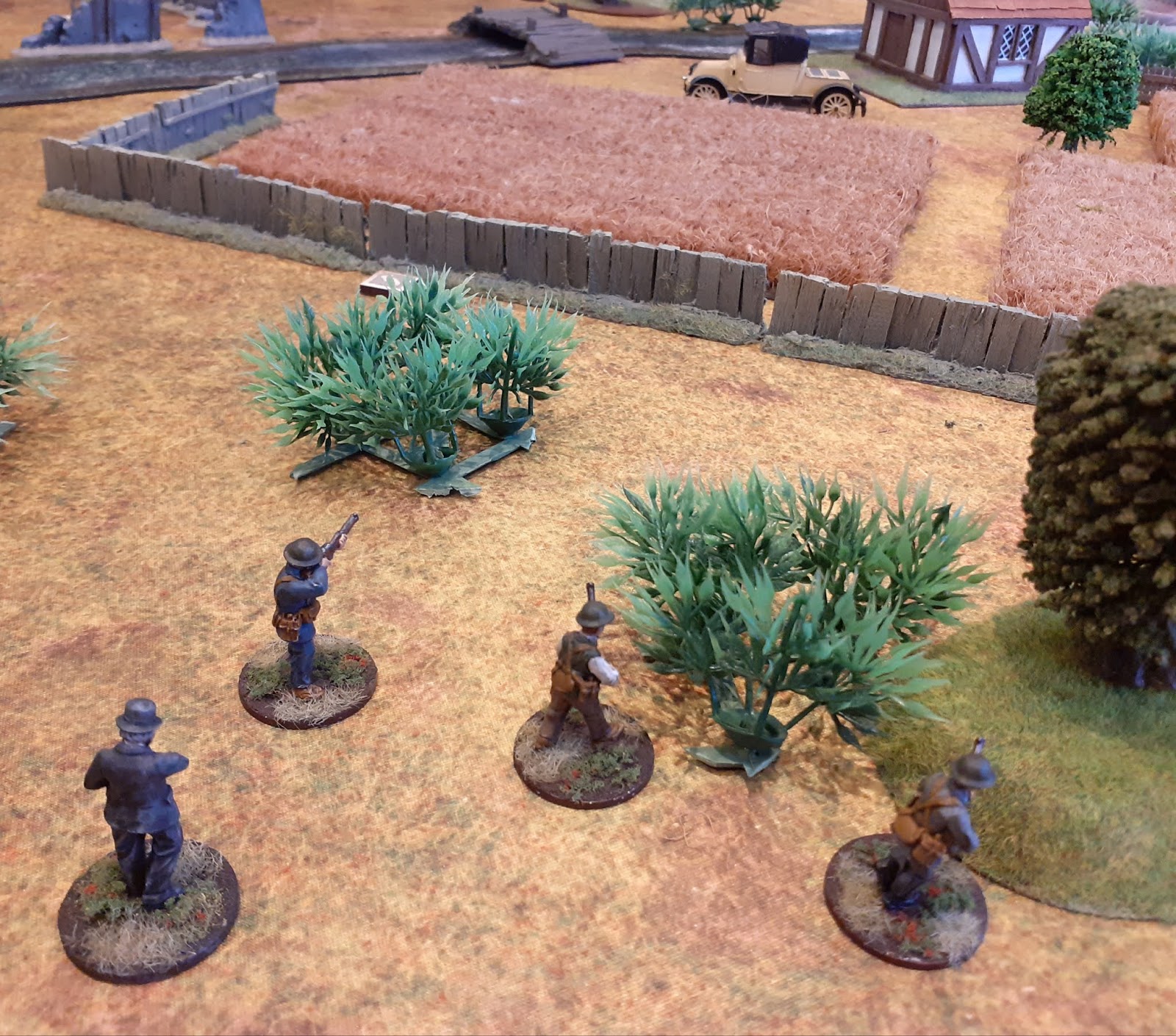 Whilst a squad of militia ran quickly towards the fence to take up a firing line. 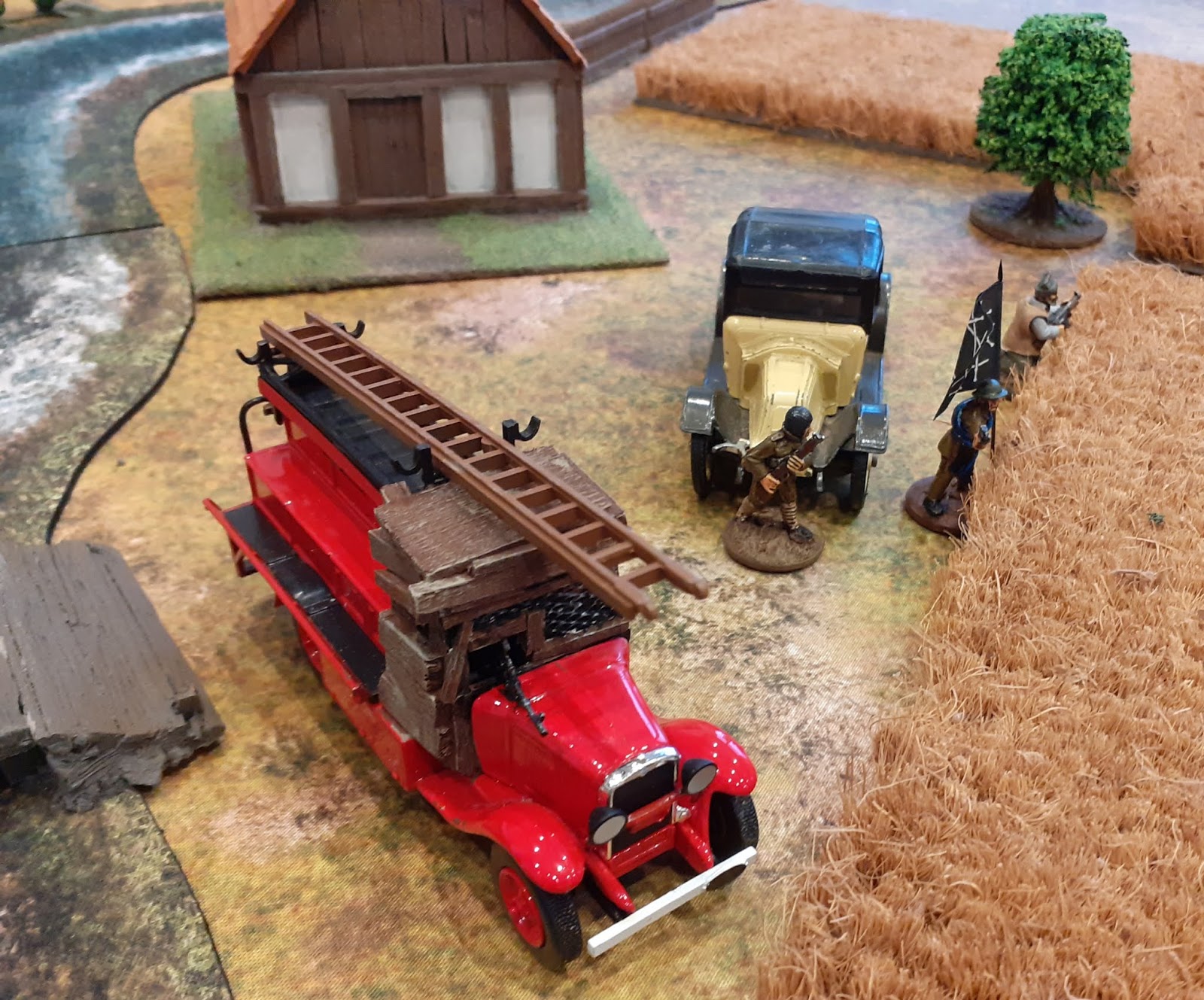 To the surprise of the men of Wortley, a bright red fire truck burst across the bridge and race towards their lines, machine guns blazing, whilst other enemy figures could been seen scurrying past the farm. 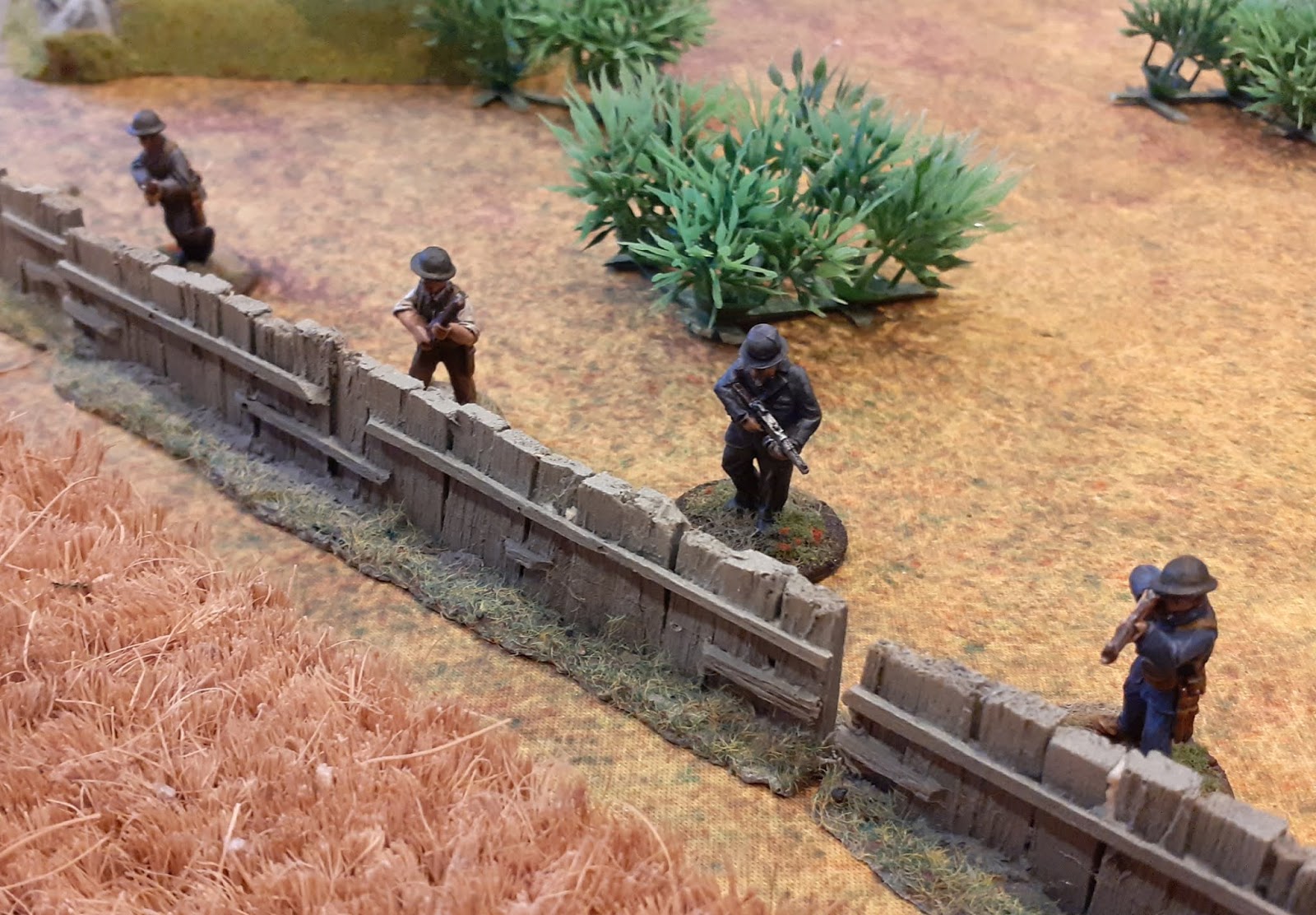 Sensing there was no time to lose, the militia raced to the fence. 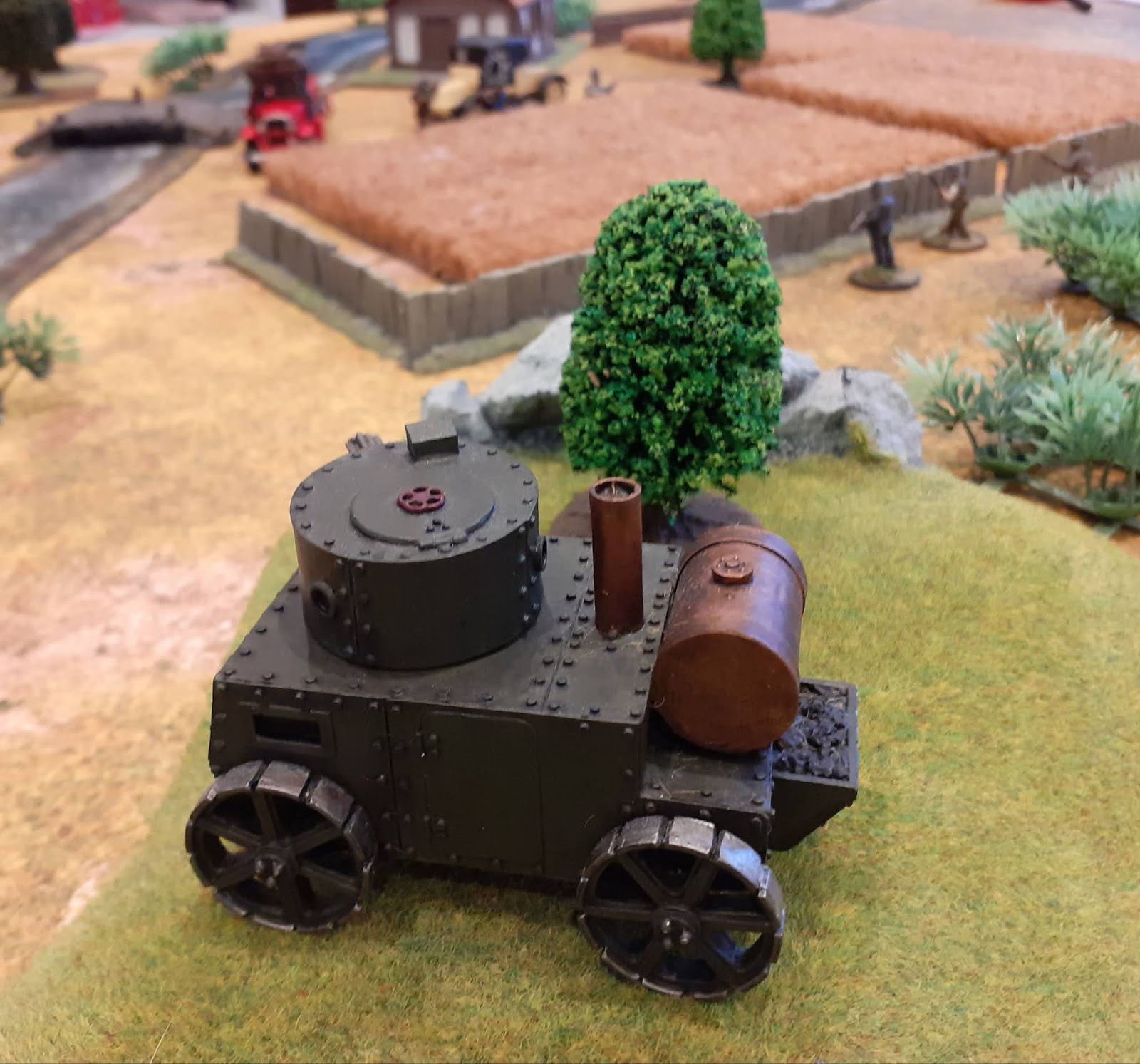 And the Dragon clunked, clattered and beached it's way to the top of a rise and began to pour fire at the enemy, raking the SICKLE and killing one of the men by the car. 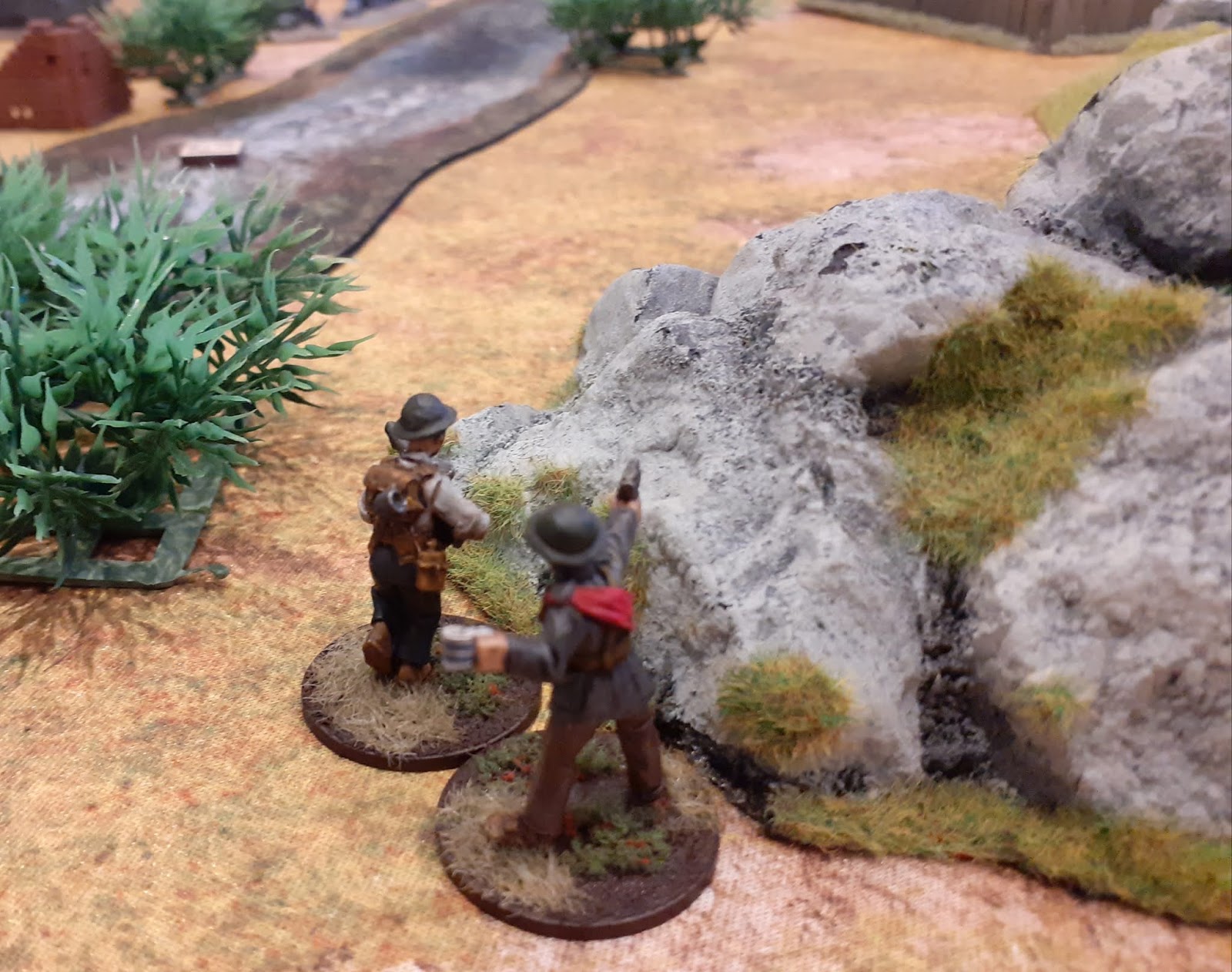 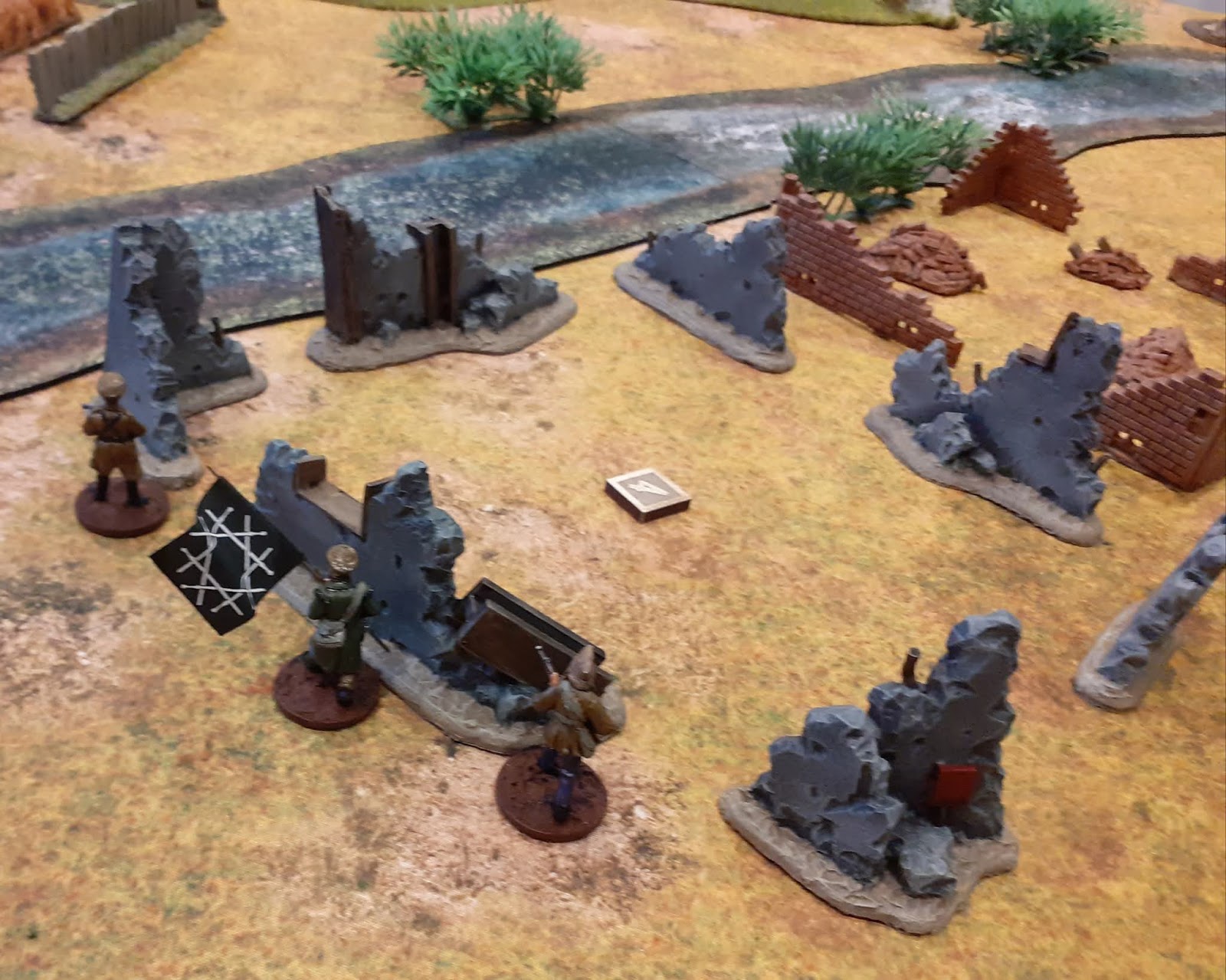 Whilst all hell broke loose to their left, the leader of the Handsworth men moved with his team through the old mill without drawing any fire. 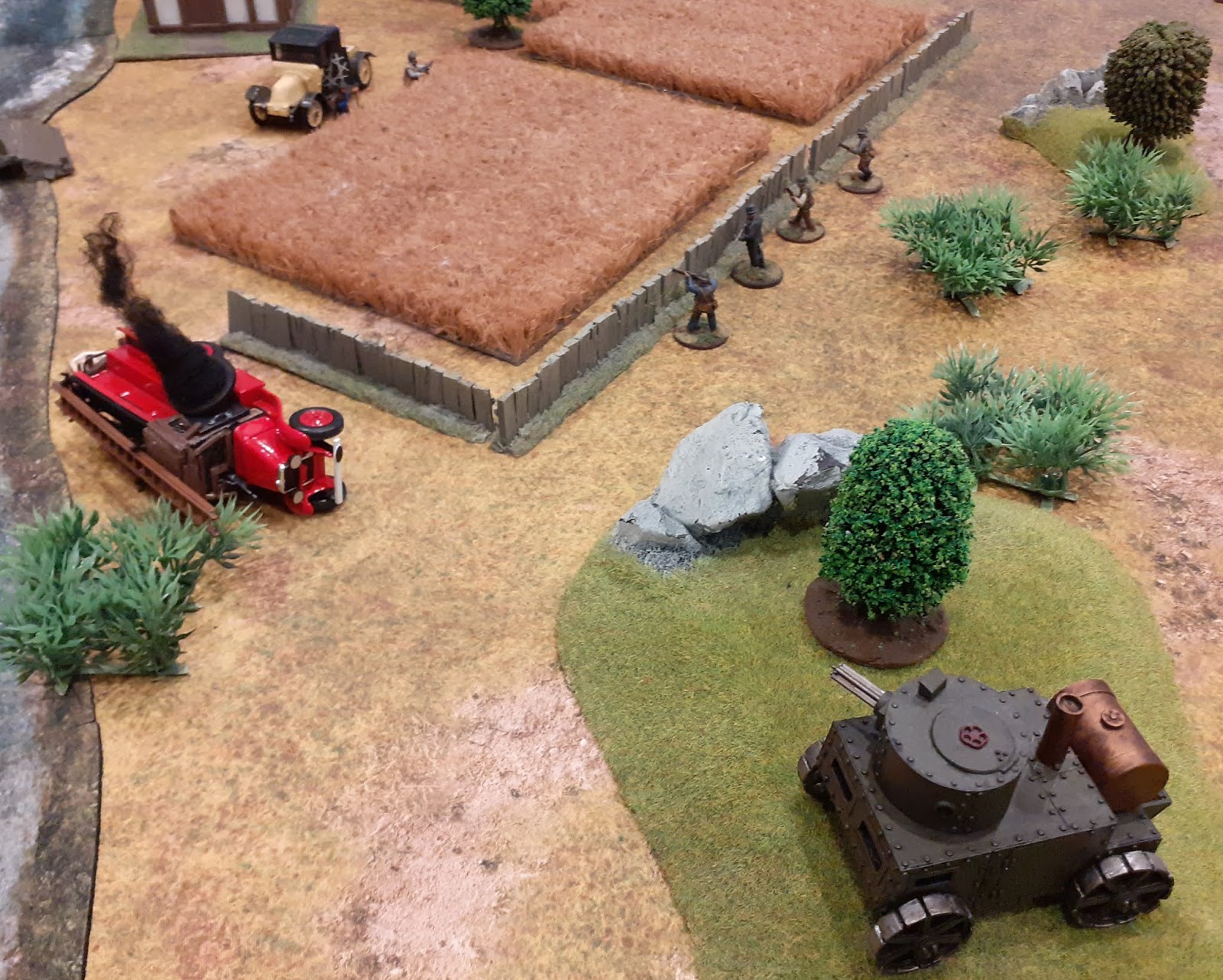 However, those was because the SICKLE was taking fire from all angles whilst barreling headlong towards the Dragon. Ultimately the weight of fire told and in an almighty explosion and the wrecked fire truck was pitched on its side. Only the chaplain crawled out of the wreckage alive. 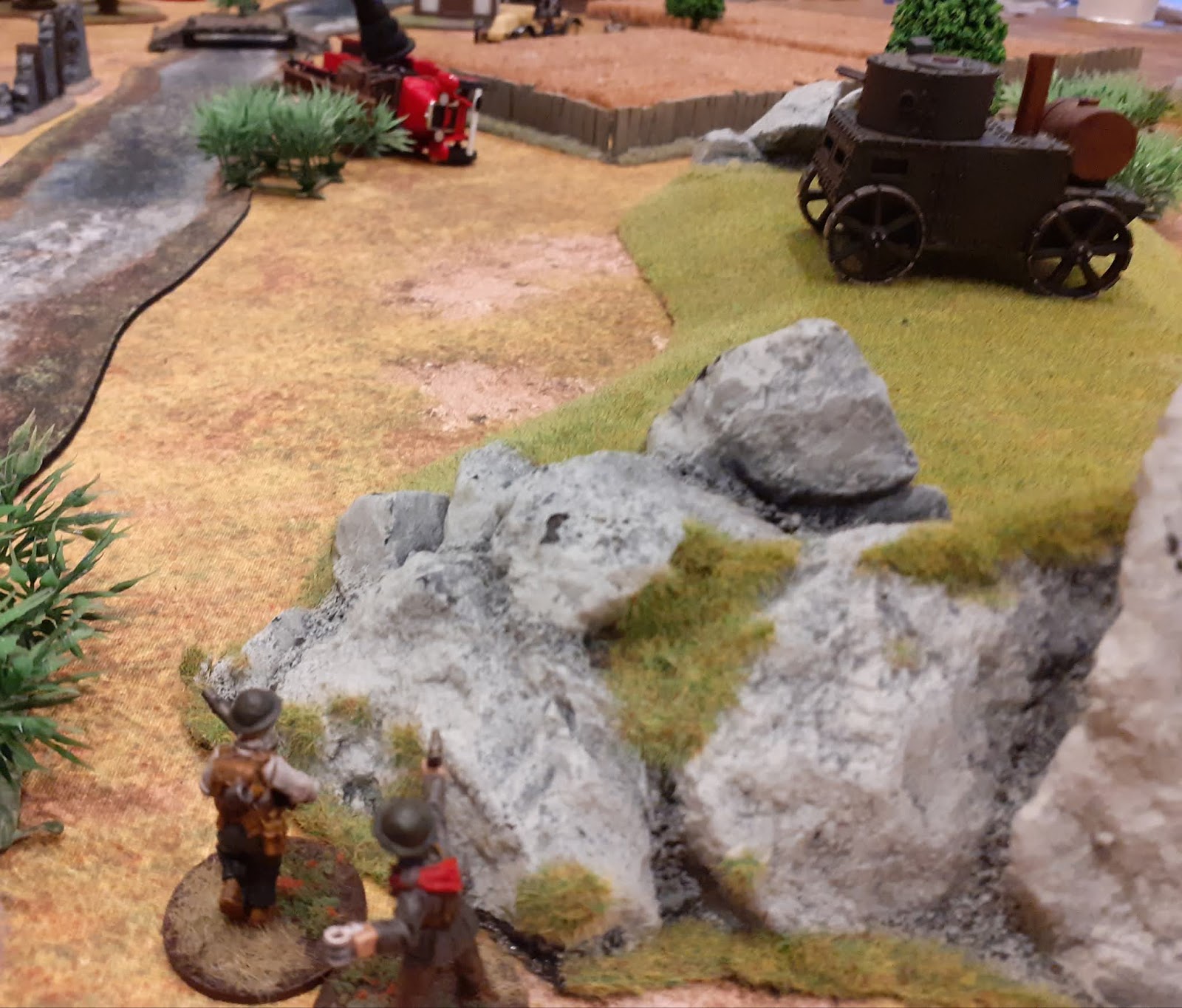 From their vantage point, the Lewis Gun team were surprised when the explosion shook the ground around them. 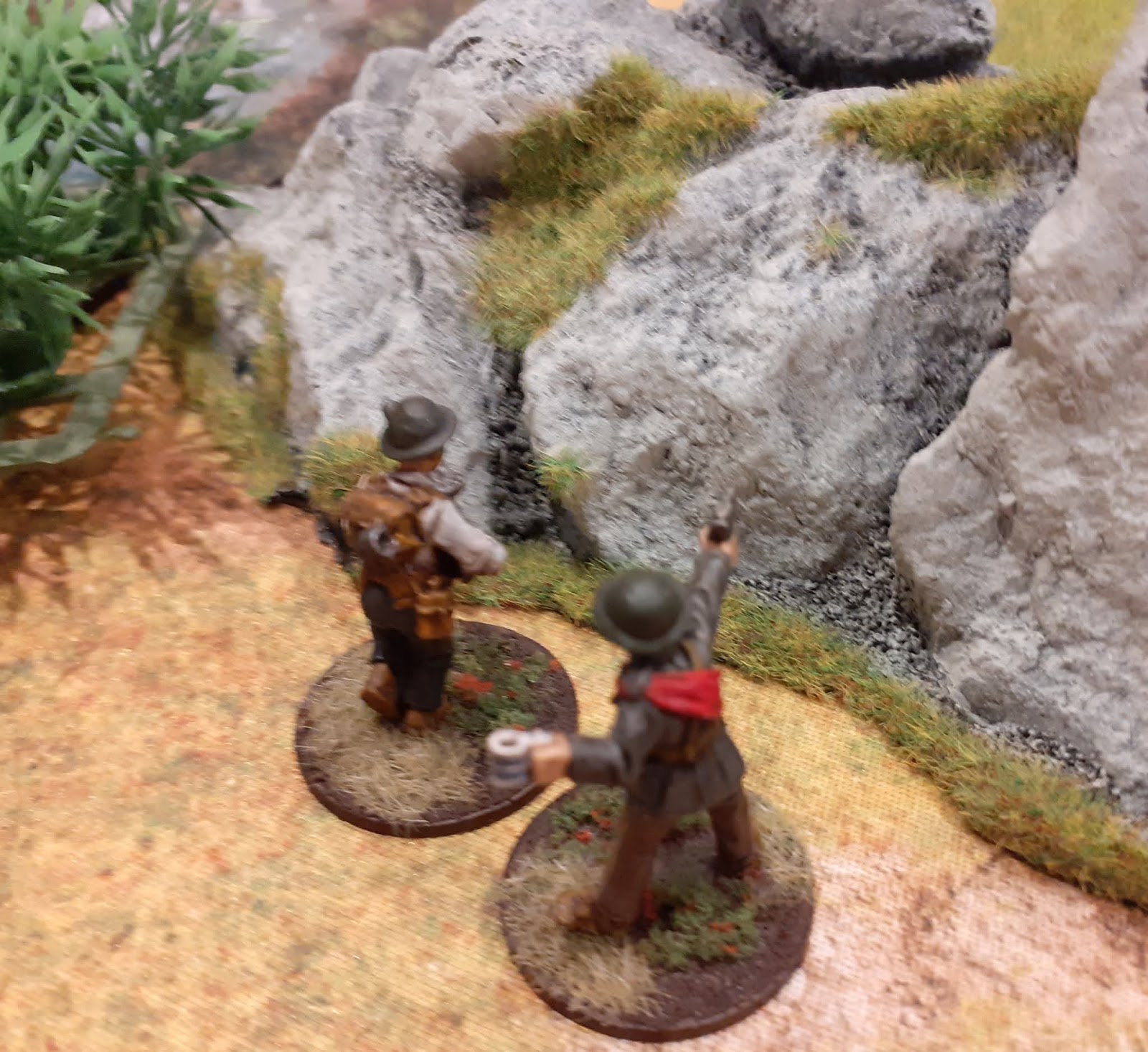 And they narrowly escaped being caught in a land slip that blocked their firing line, taking them.out of the fight until they could reposition. 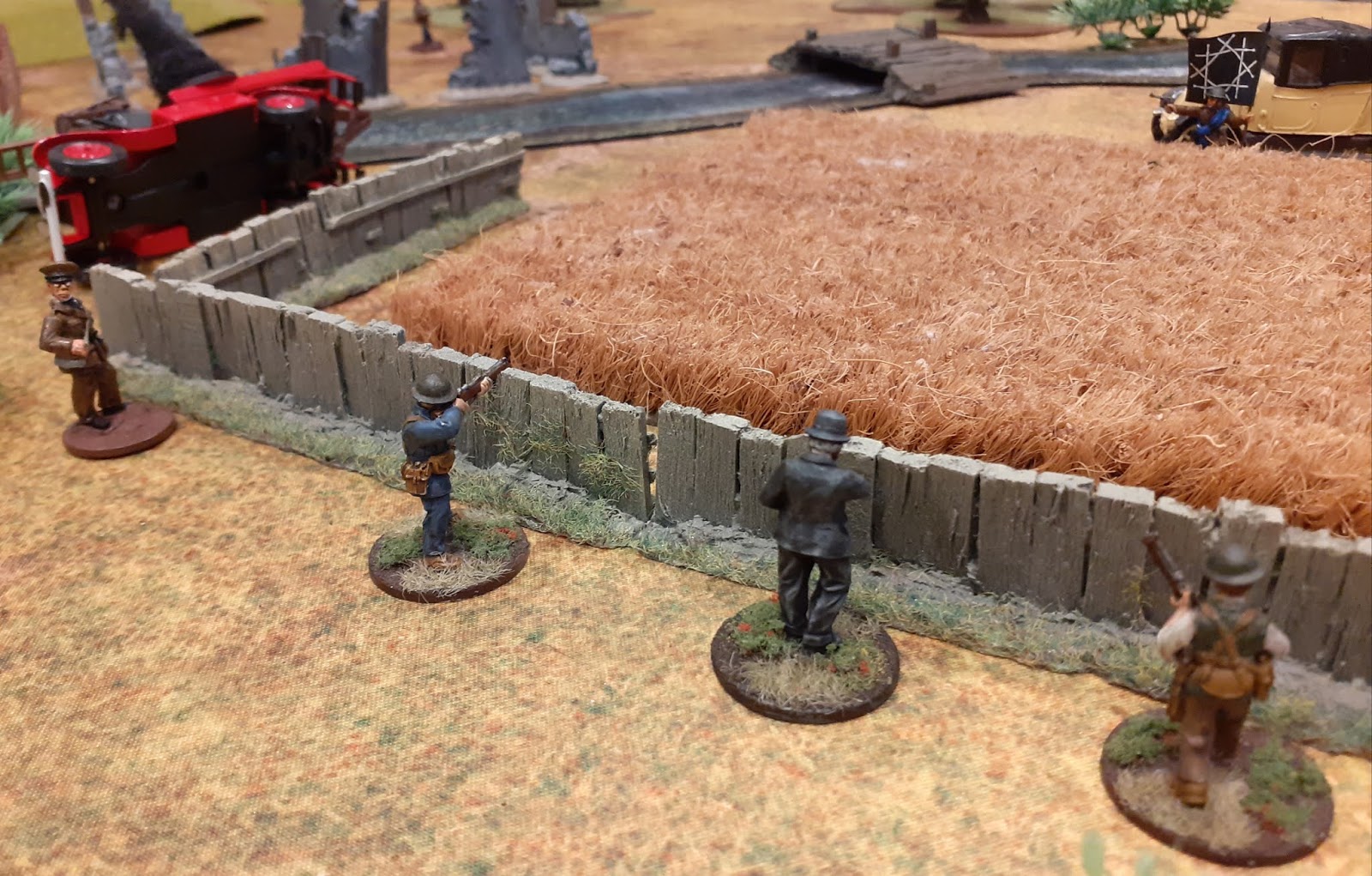 In a chilling reminder of their experiences in the Great War, the Handsworth men tried to advance across the cornfield to the well defended Wortley lines, but were shot down one by one.
However, help arrived in the form of the chaplain, whose injured form, crawling out of the wreckage of the SICKLE made one of the militia briefly rethink what he was doing. 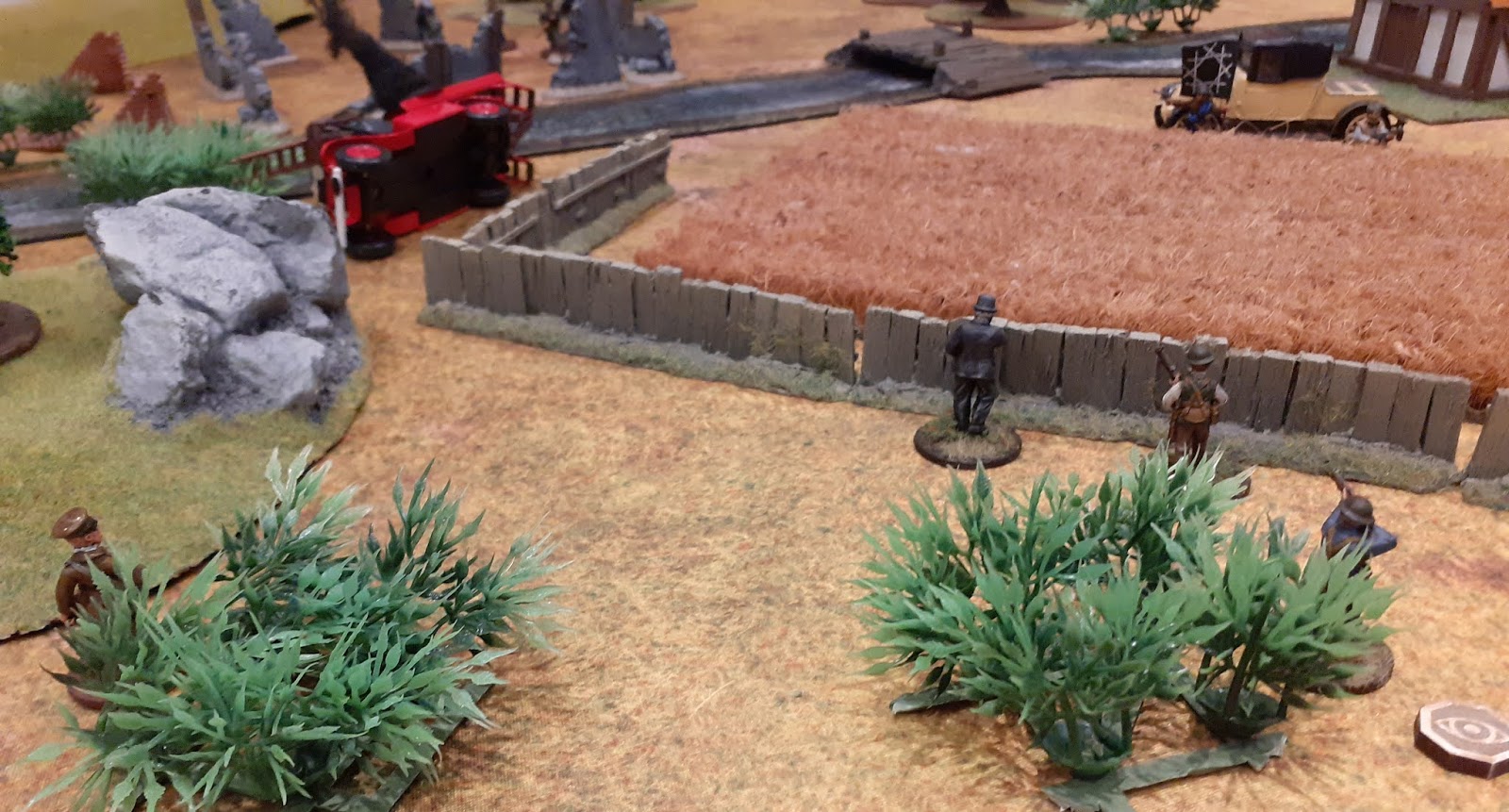 This moral dilemma caused him to back away from the fight and question the choices that had led him to firing upon his own countrymen, allowing the chaplain to stealthily make his way past the Wortley lines. 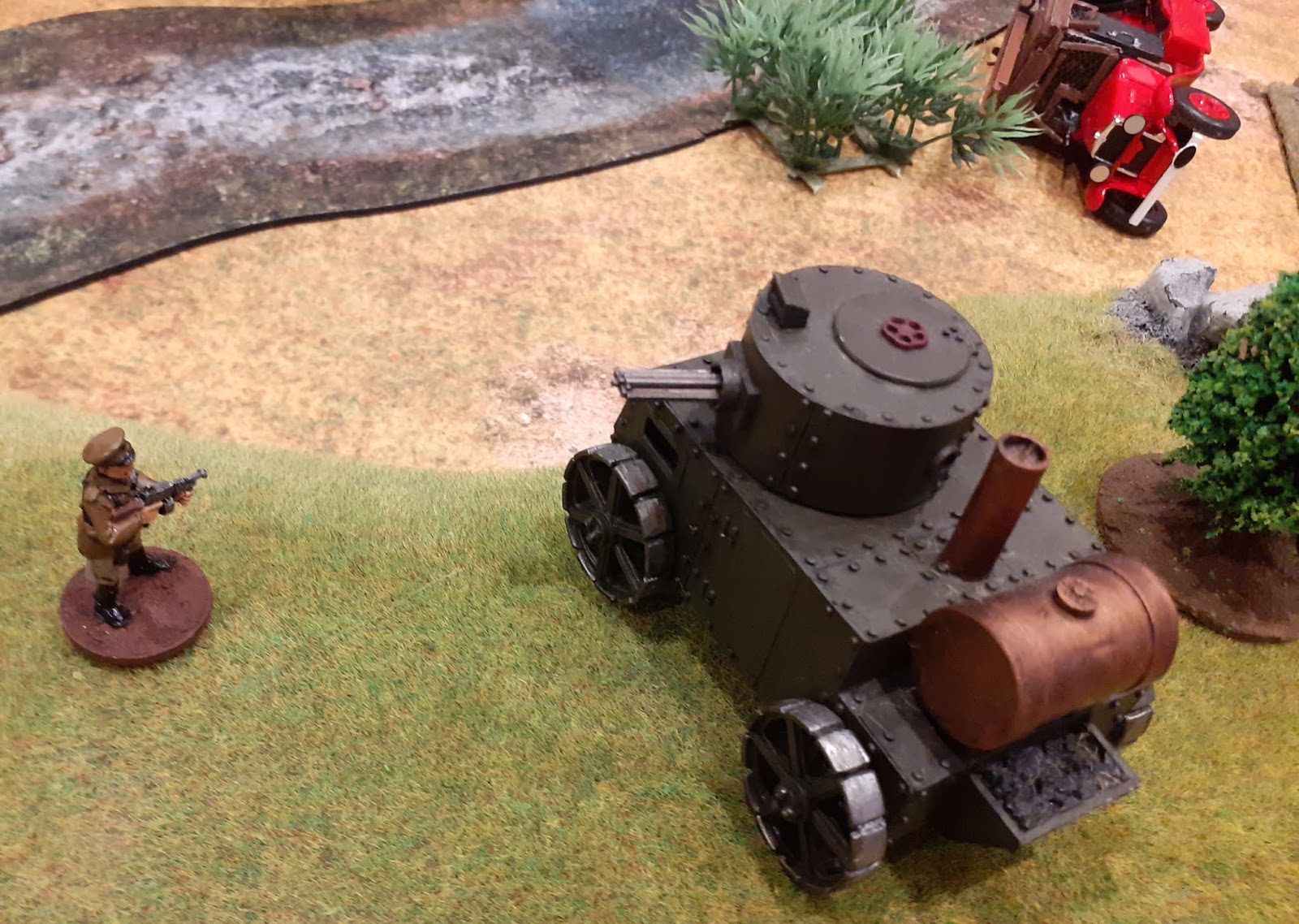 Seeing his men gunned down and realising that the Dragon would soon turn its attention to him, the leader of the Handsworth scouting party suddenly made a death or glory charge towards the Dragon, spraying it with SMG fire.
Despite the Dragon pouring fire at him, including a jet of some corrosive substance sprayed put of the window slit, the socialist officer was somehow able to exploit the steam tank's high firing point and duck under everything that came his way, scurrying past the armoured behemoth to escape. 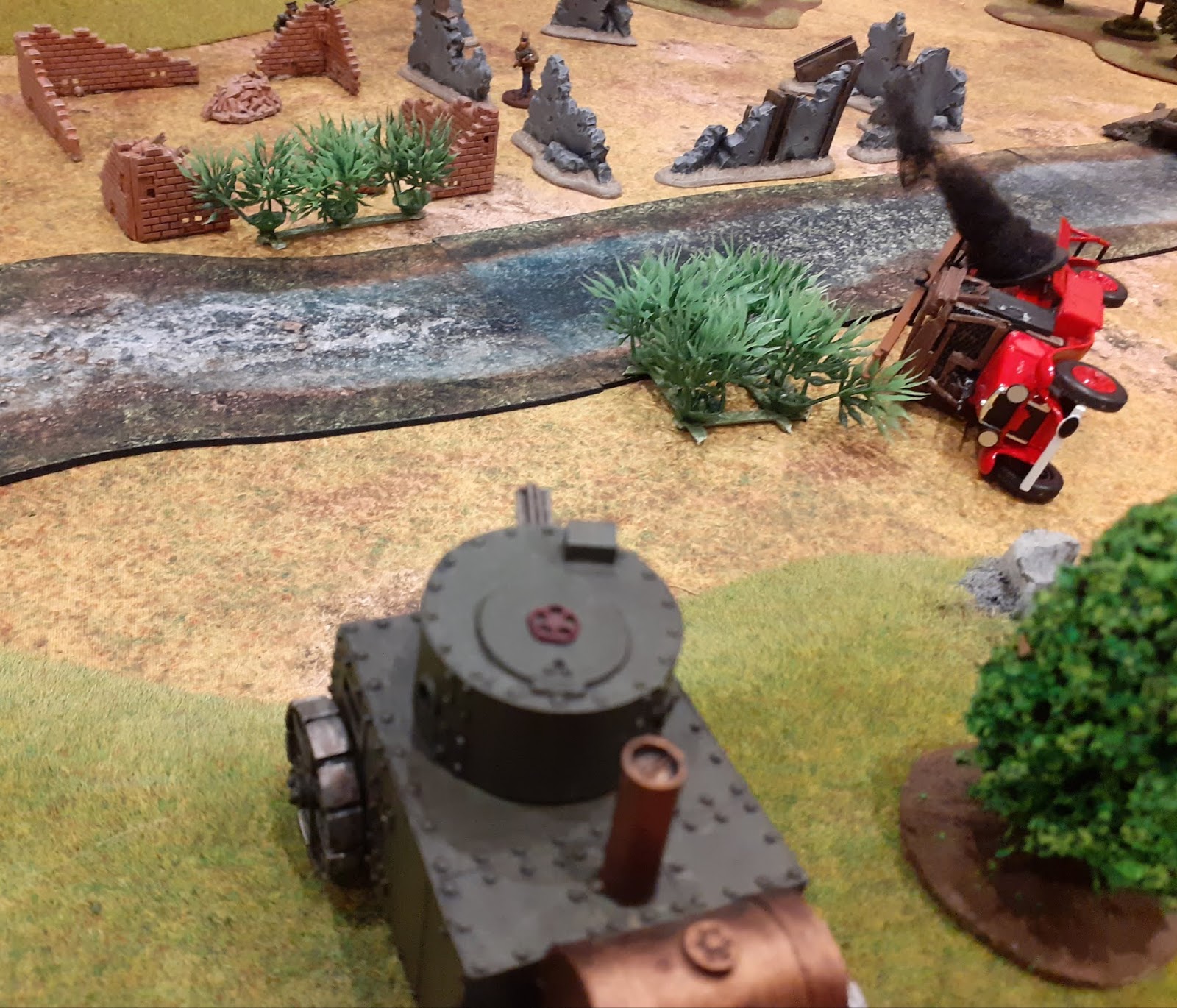 The last few men of the Handsworth squad were not so lucky and were gunned down amidst the ruins of the mill.
However, the team leaders had escaped and the PRSY would at least be able to prepare for when the lumbering beast headed their way.
In what had appeared to be a somewhat one sided affair, Matt's Handsworth Volunteers had almost all been killed by my somewhat cheesy heavy firepower. However, speedily grabbing objectives and getting his two co-stars off the board handed Matt an 8-2 pyhrric victory.
It was fun to use Apocalypse vehicles in the game, and although the 17 rating Dragon was a bit OTT, it did leave me both short handed and short of plot points, which proved crucial for Matt when he made his dash for glory.
I'm not sure where we're going next, but given that I know Matt has a WW1 artillery piece, I confidently expect the Dragon to be facing it masquerading as a bazooka team then next time it numbers out of the work sheds.
Posted by Kieron at 14:34