George Orwell once called Sheffield 'the ugliest town in the Old World', which seems a harsh judgement. However, it's a little know fact that his viewpoint was probably affected by his being captured whilst visiting the area by the local branch of the British Union of Facists during the opening stages of what became known as a Very British Civil War. 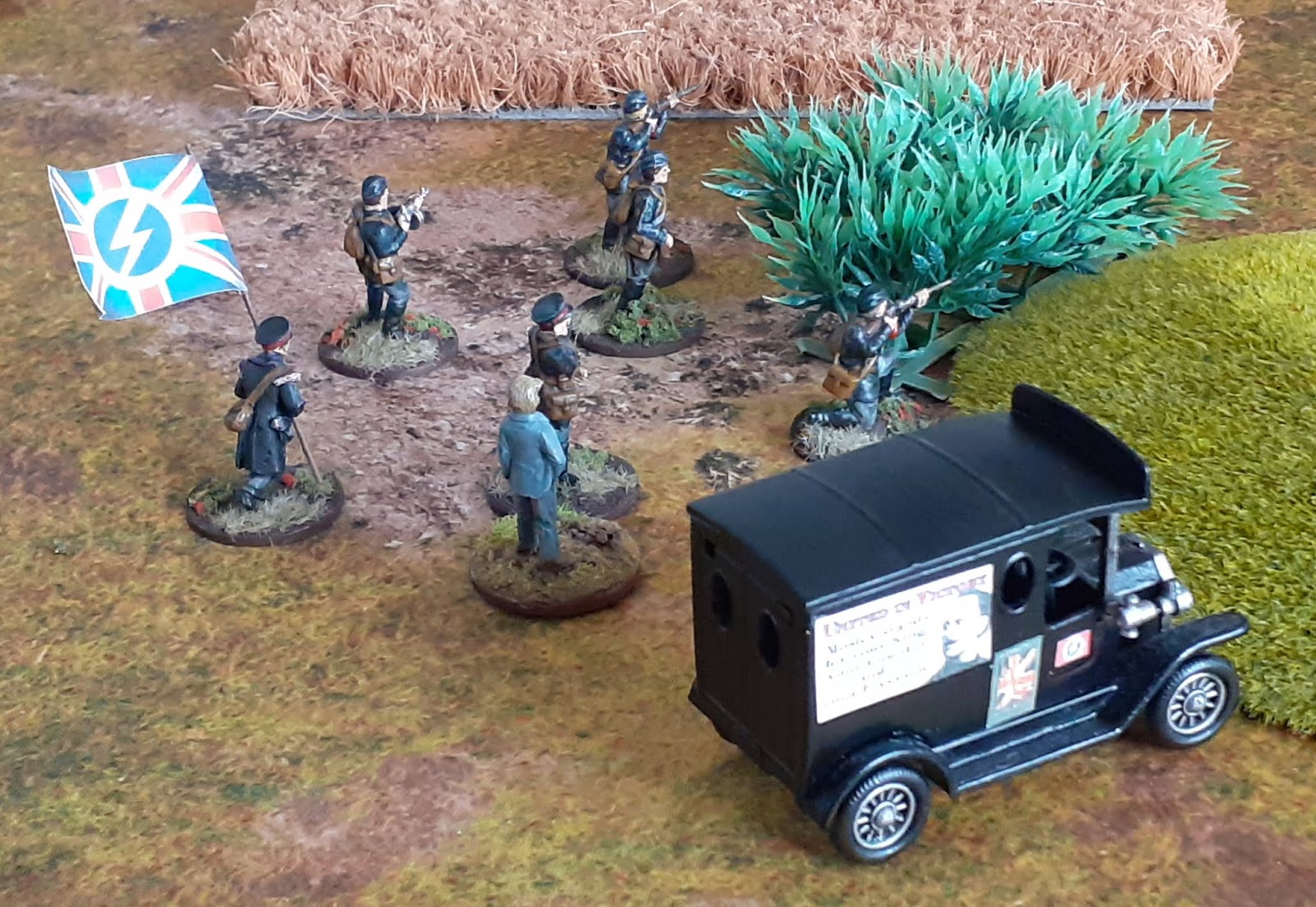 Fortunately for Mr Orwell, a rescue mission was launched by the Swallownest Socialist Brigade, a local socialist workers militia affiliated to the Handsworth Volunteers. 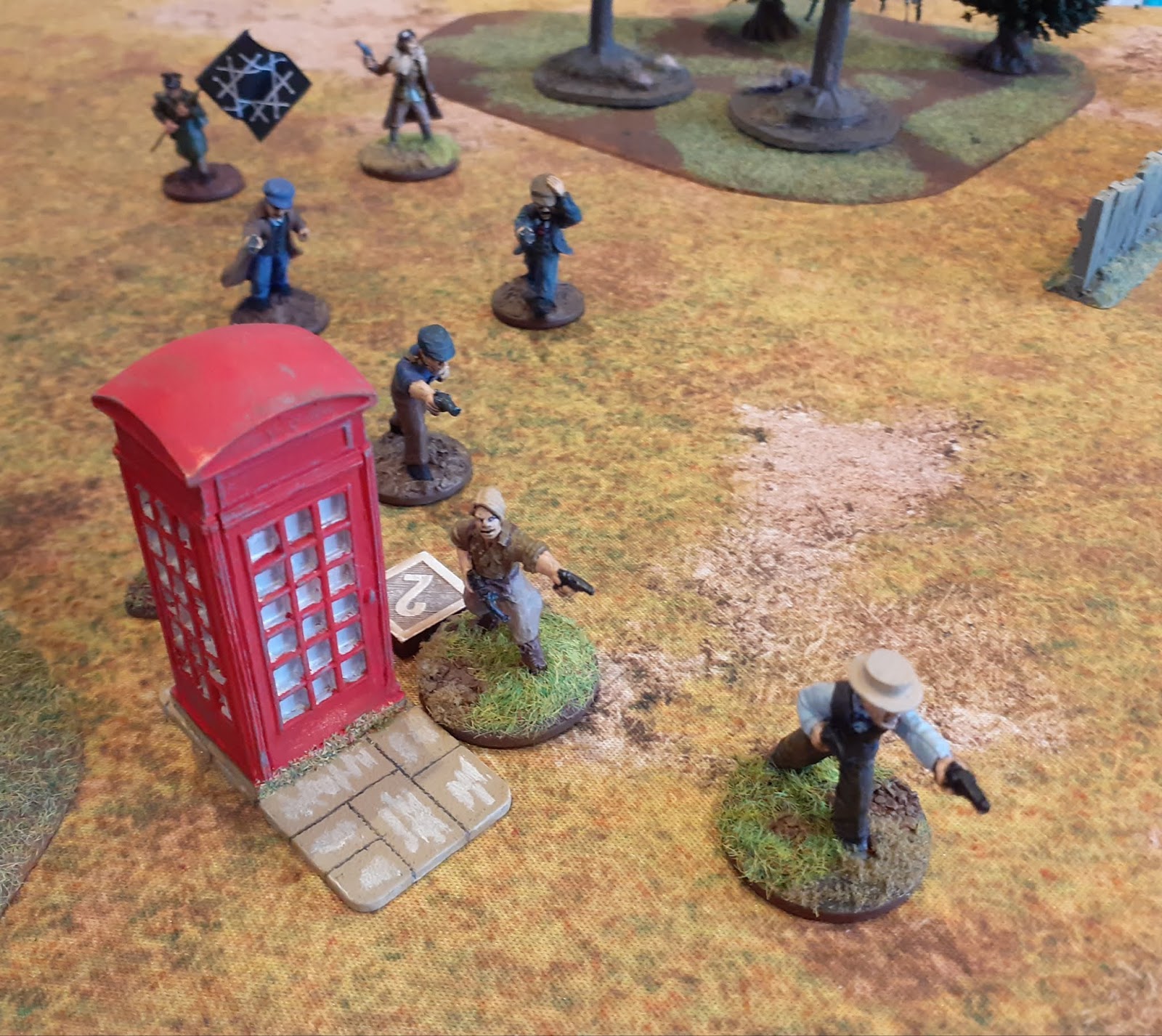 If you haven't worked it out yet, this is battle report for 7TV: Pulp in which Matt and I broke out our VBCW forces for a little dust up. We've used a range of rule sets for VBCW over the years, but we felt that 7TV might suit the tongue-in-cheek nature of the setting.
My BUF consisted of:
Branch Officer Jack Boot - Ruthless Lieutenant (Co-Star)
Mr Frederick - Big Game Hunter (Co-Star)
Billy Boys - VIP (Extra)
BUF: Sheffield Branch - Stormtrooper Unit (Extras)
- Stormtrooper Commander
- Stormtrooper Sergeant
- 6 Stormtroopers
Propaganda Wagon - Sedan (Vehicle)
Matt's faceless (and currently nameless - typical feckless leftists) socialists horde were:
Cynical Gumshoe (Star)
Rebel Leader (Co-Star)
4 Rebels (Extras)
Grease Monkey (Extra)
VIP (Extra)
We used our flag bearers as VIPs, as the effect they had on PPs during the game seemed appropriate. The scenario was The Rescue and so Mr Orwell was also a captive VIP. 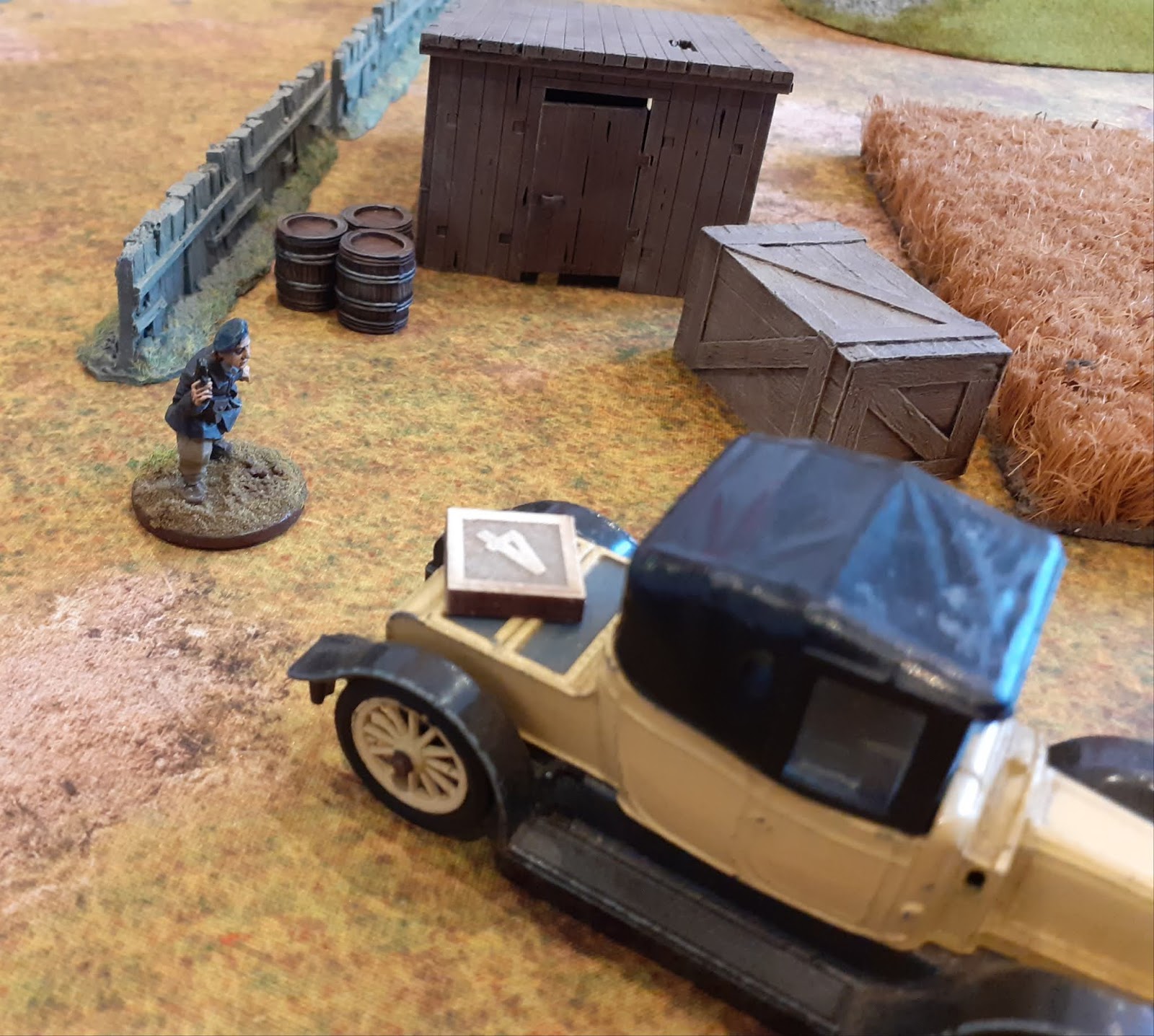 The socialist leader lead the way, slowly sneaking into the farmyard and disabling the car parked there, to prevent escape. 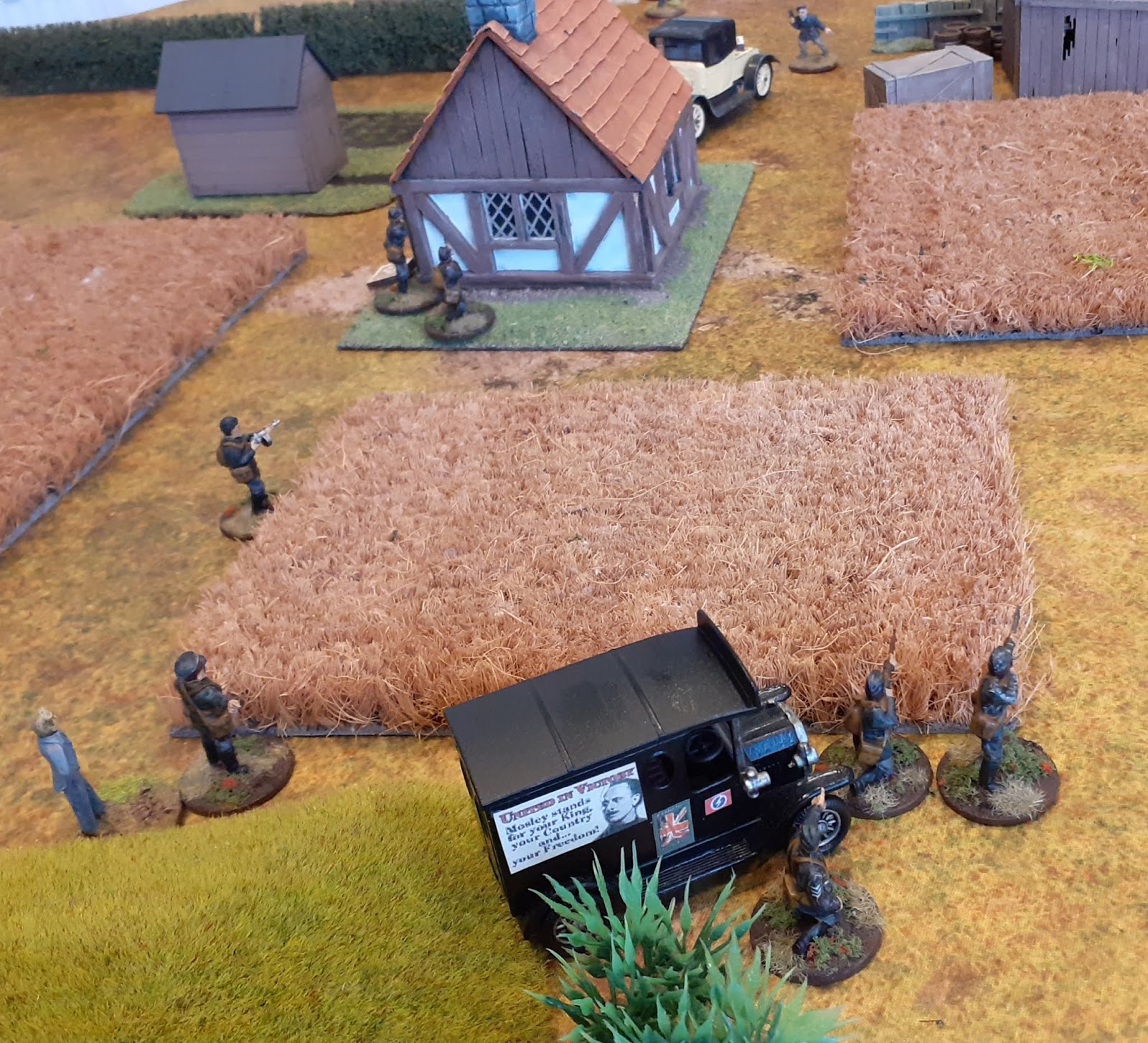 However, the BUF, who had returned, with Mr Orwell in tow, to Pinchfield by the back roads, caught sight of movement in the yard and spread out. 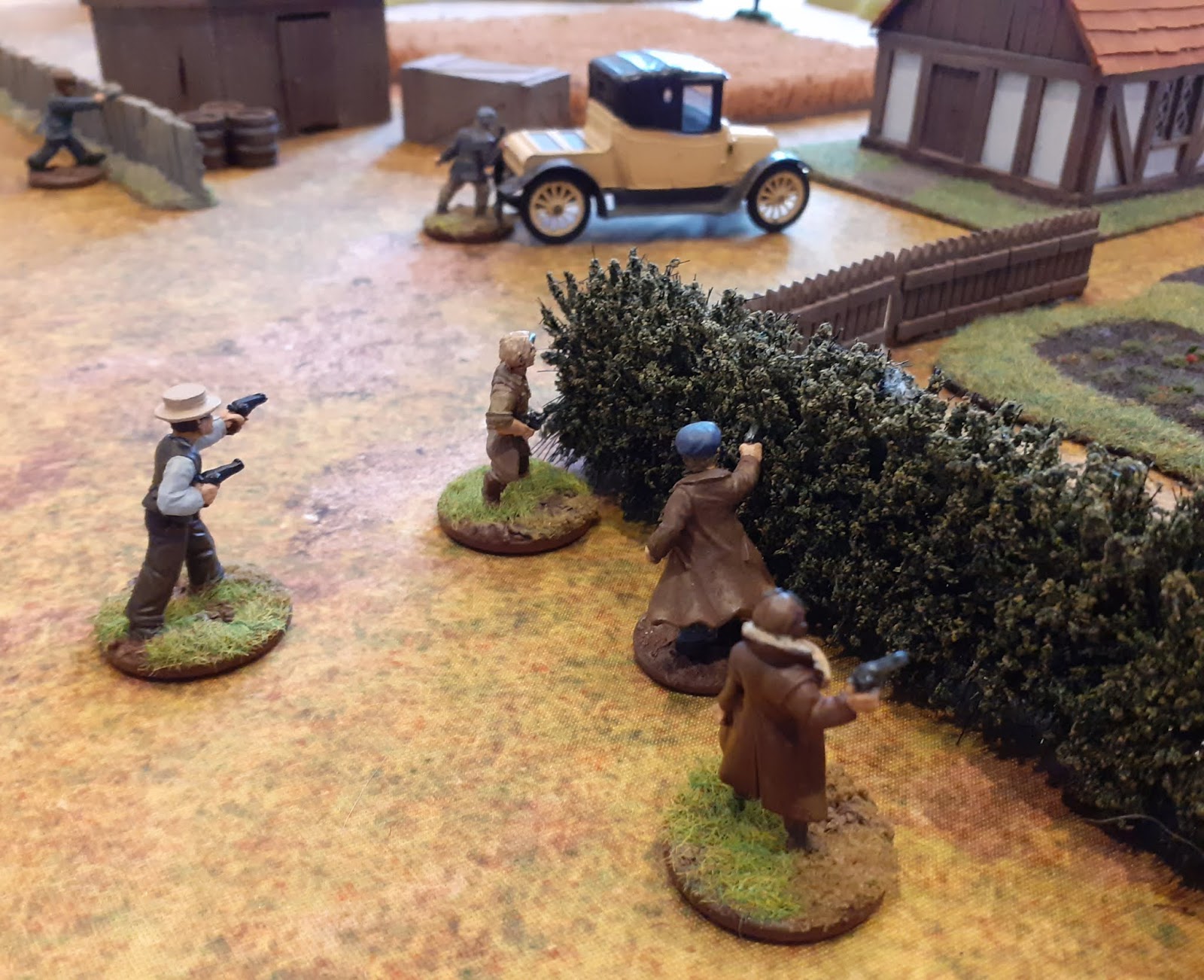 Aware they had been rumbled, the socialists took up firing positions by the hedge. 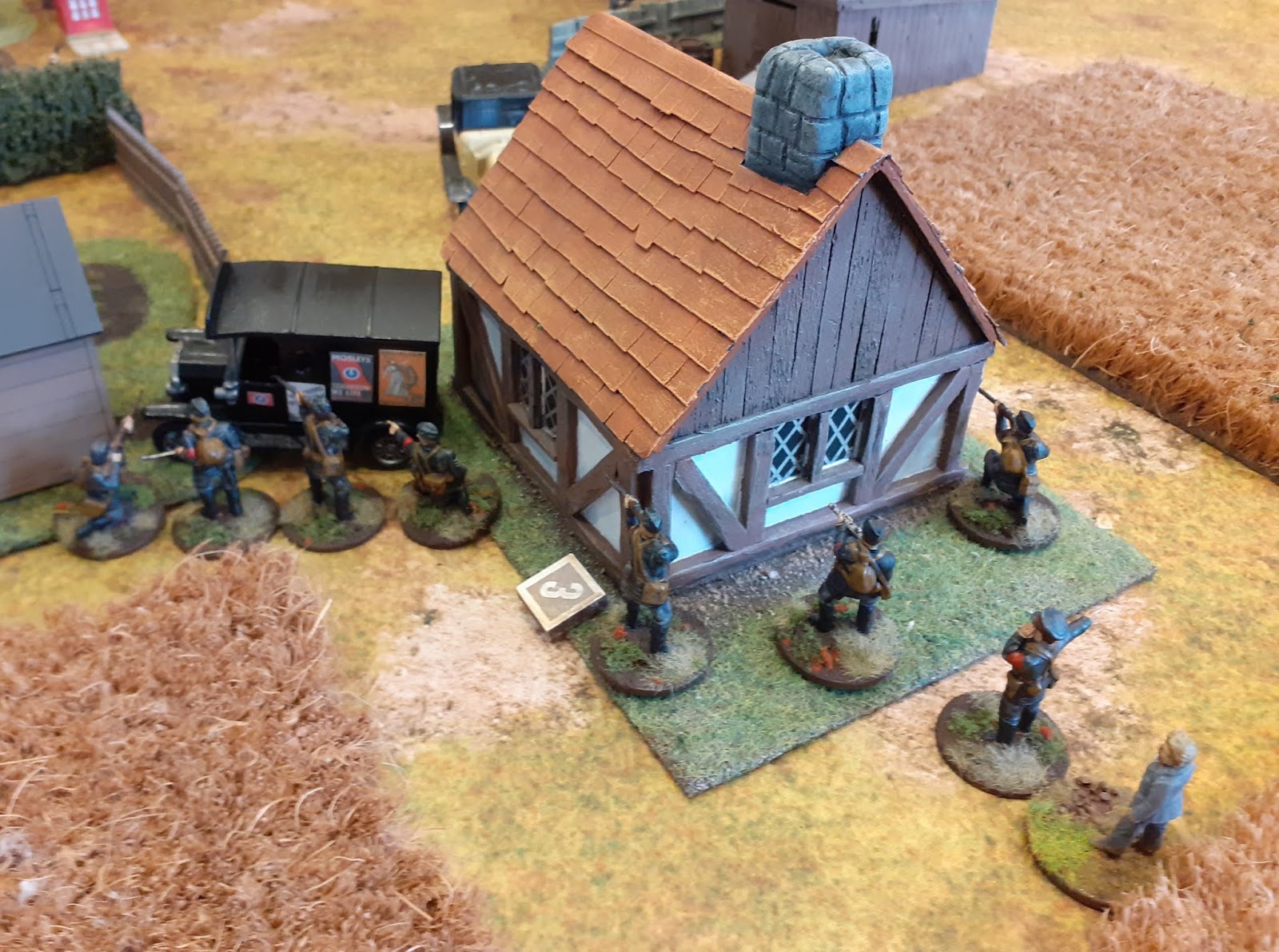 In an ostentatious move, the driver of the propaganda wagon performed a handbrake turn which thrust the vehicle between the shed and the house, simultaneously creating a barricade for the BUF to shelter behind and exposing the filthy commies to some of Oswald Moseley's more stirring quotes. 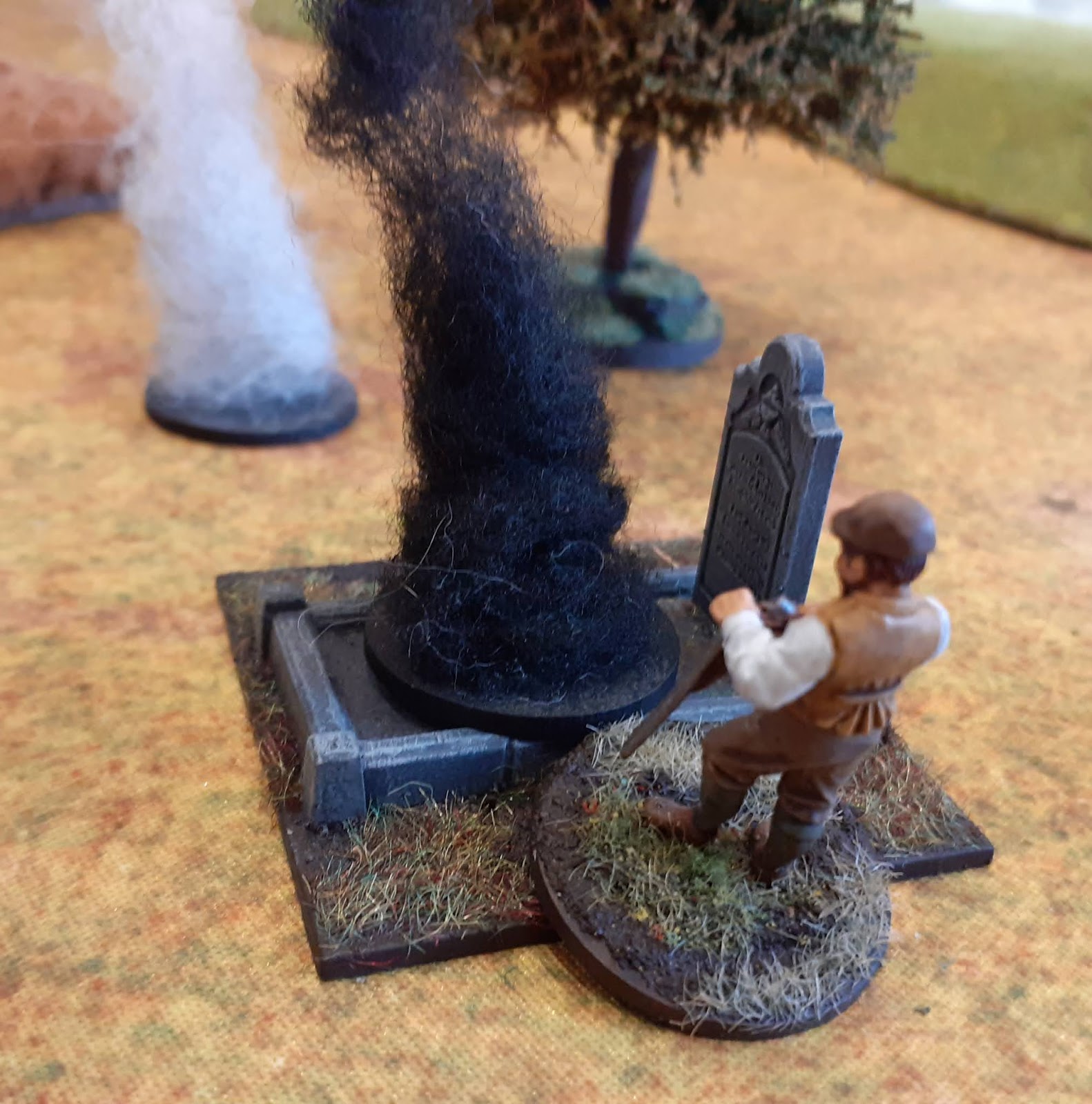 Meanwhile, Mr Frederick, the owner of Pinchfield, started a small smokey fire near the grave of his father to provide himself some cover. 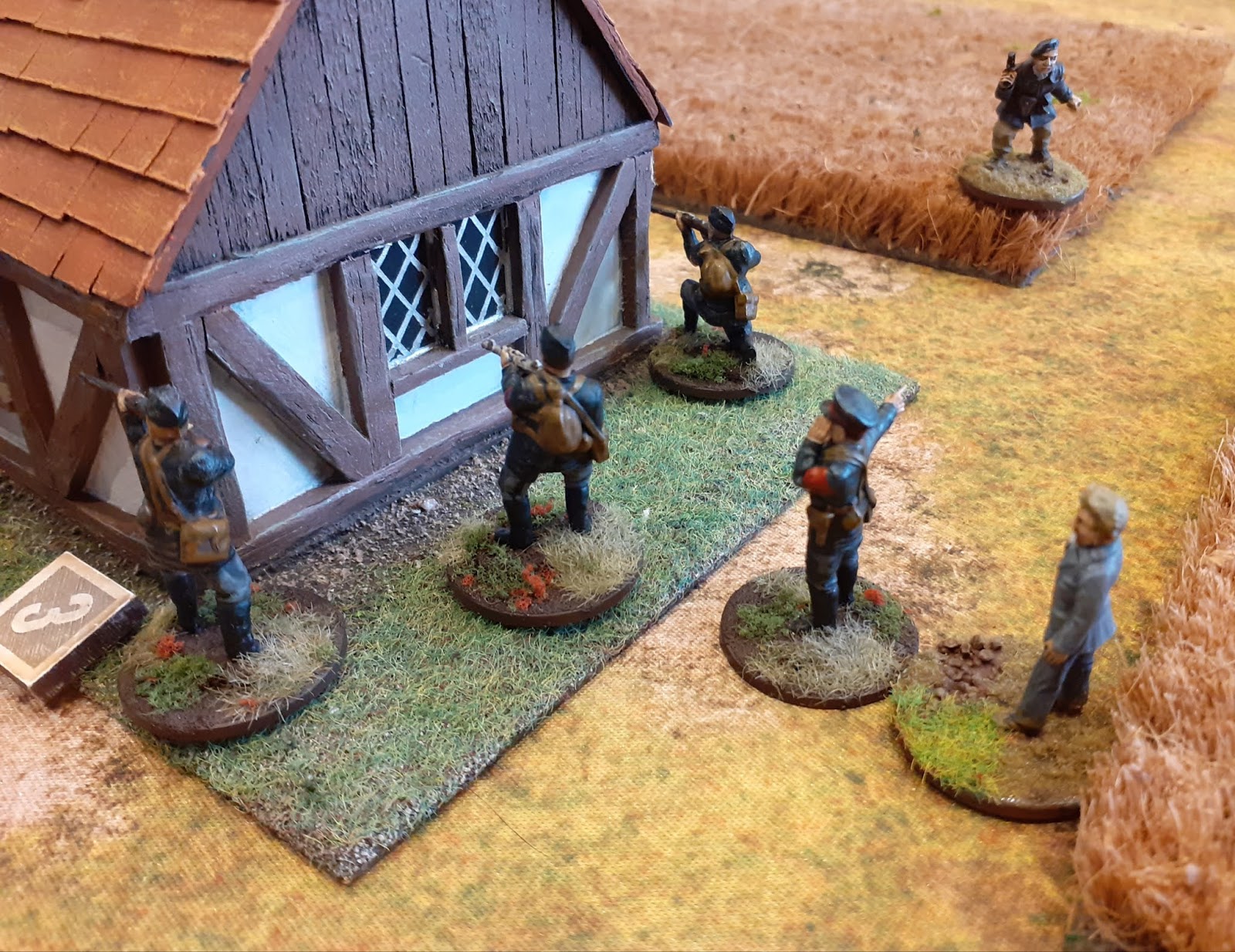 Despite these precautions, the socialist leader managed to flank the BUF (unsurprisingly, he moved to his left), and unloaded his revolver into one of the fascists. He also tried to shoot Jack Boot, but another of the loyal blackshirts leapt in the way. 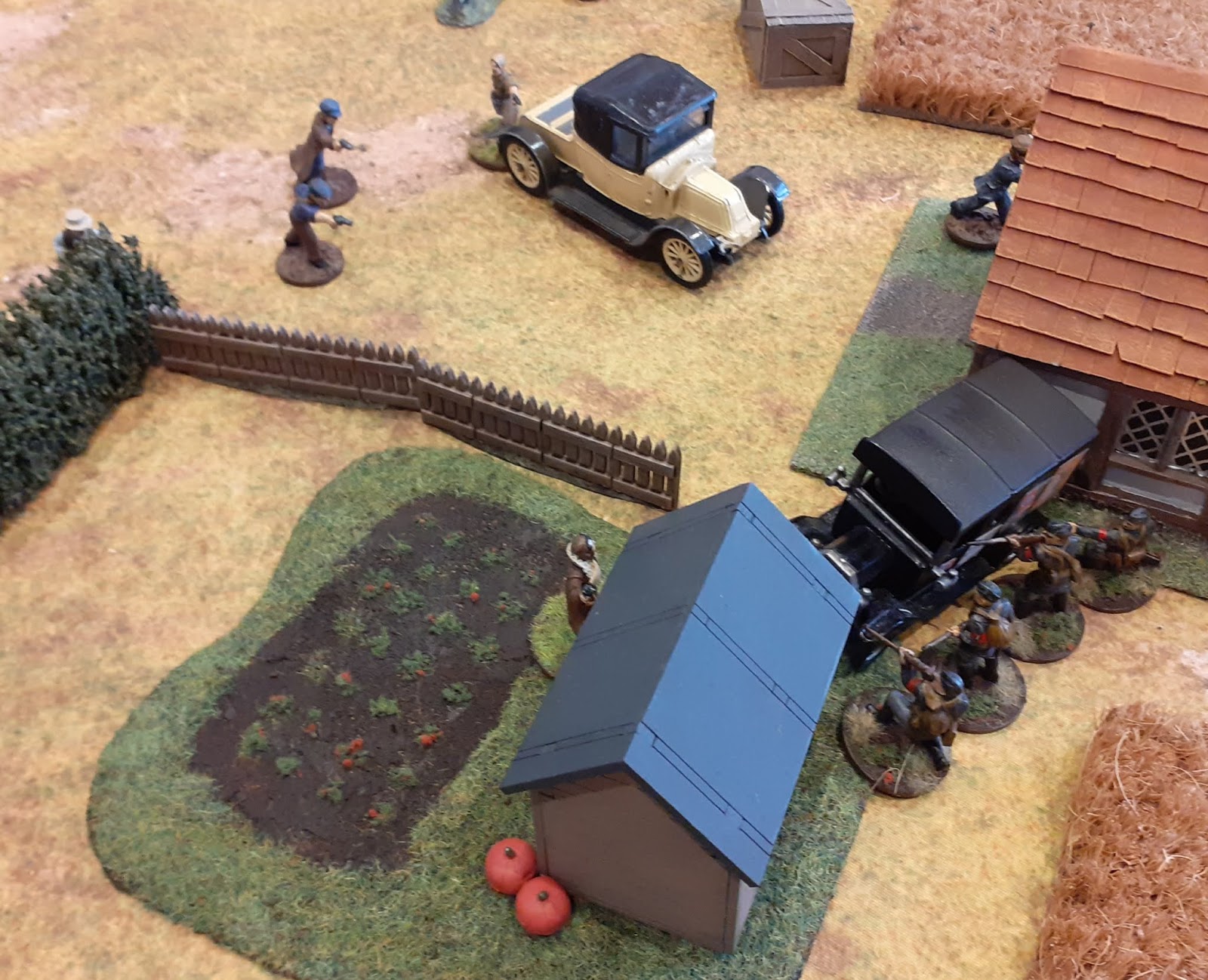 On the other side of the house, a largely ineffectual firefight broke out. 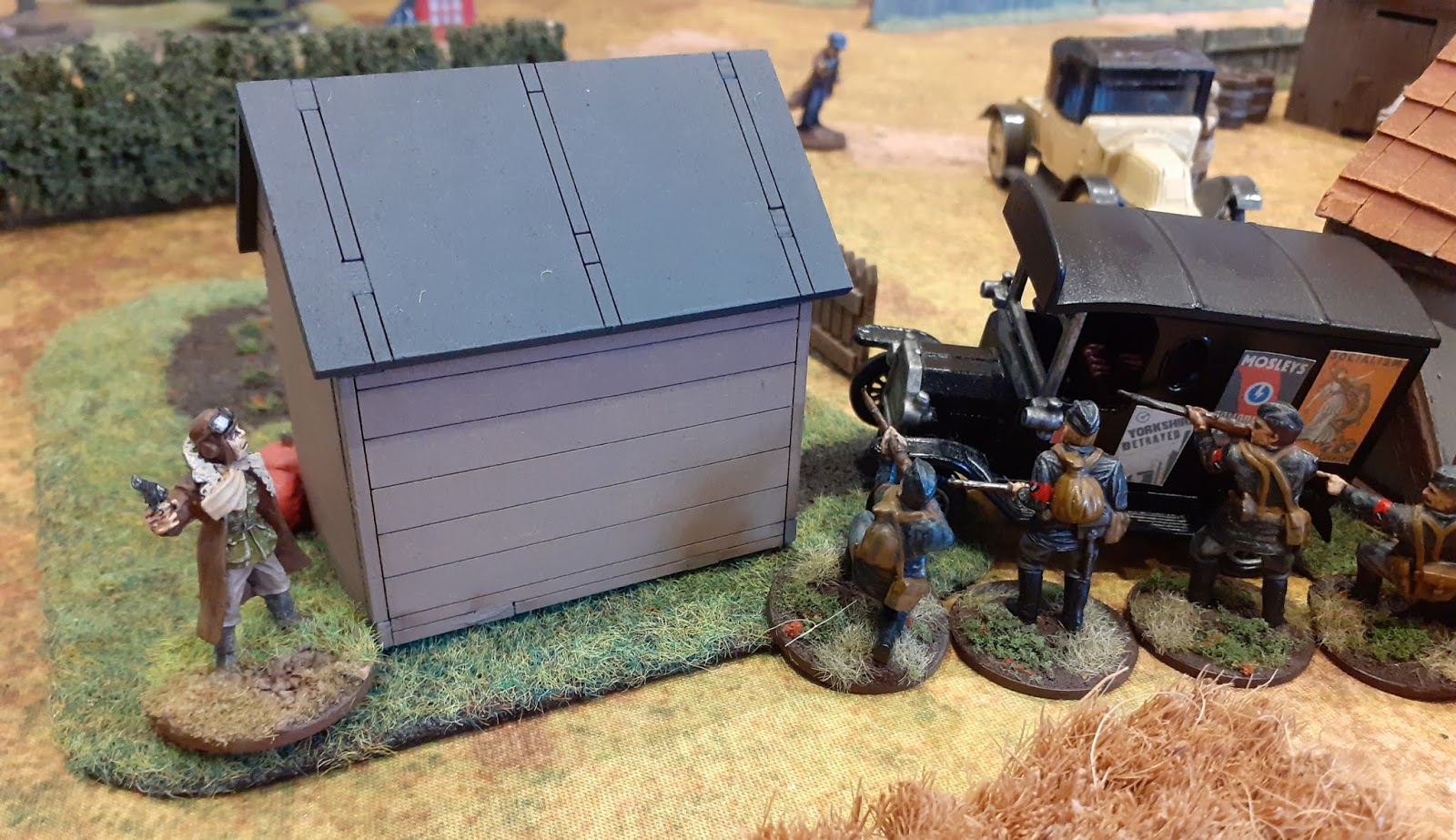 The works engineer tried to break the stalemate by moving round the side of the shed. 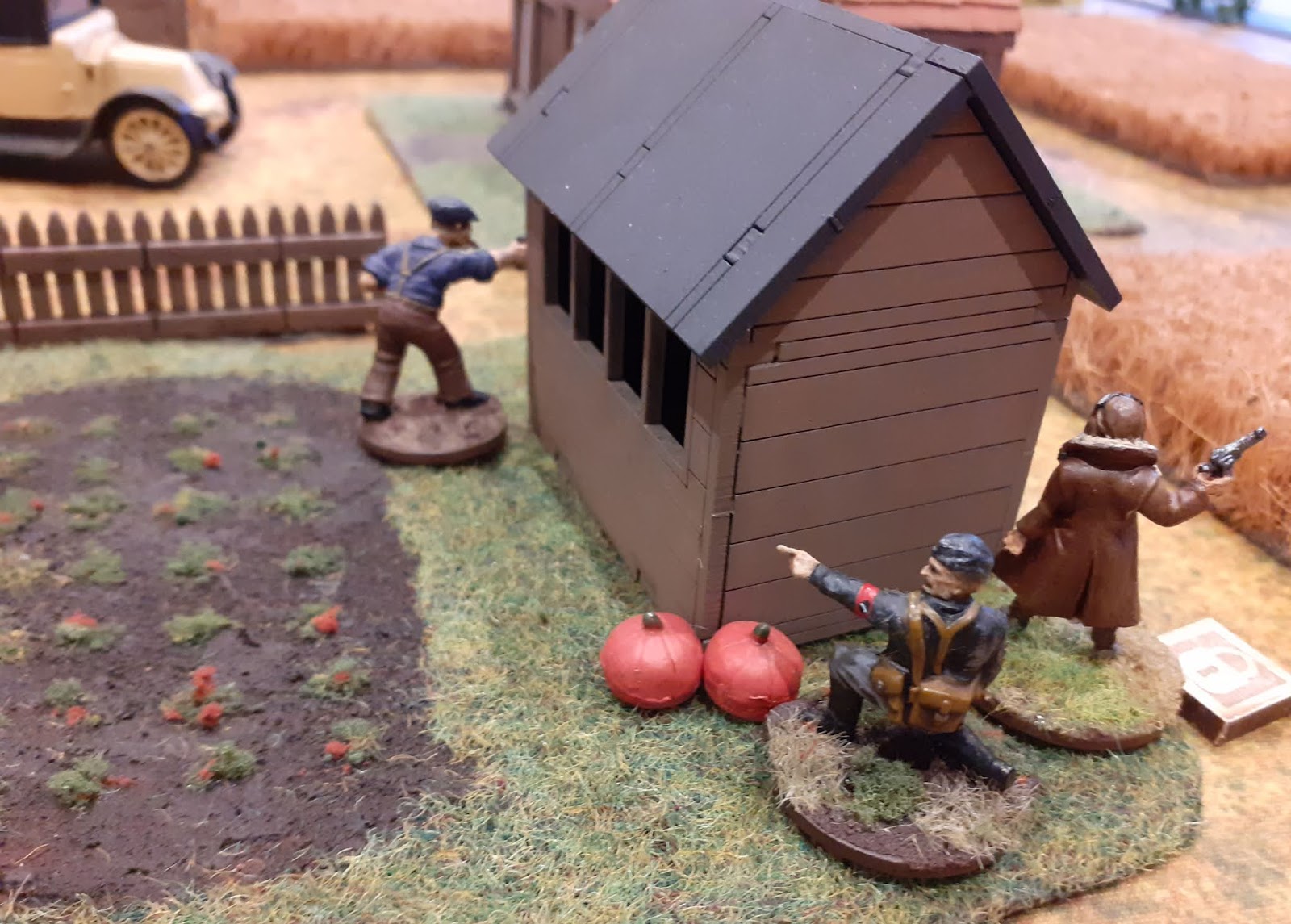 However, his plan failed as he was assaulted and captured by the BUF platoon commander, who then also tried the same trick. 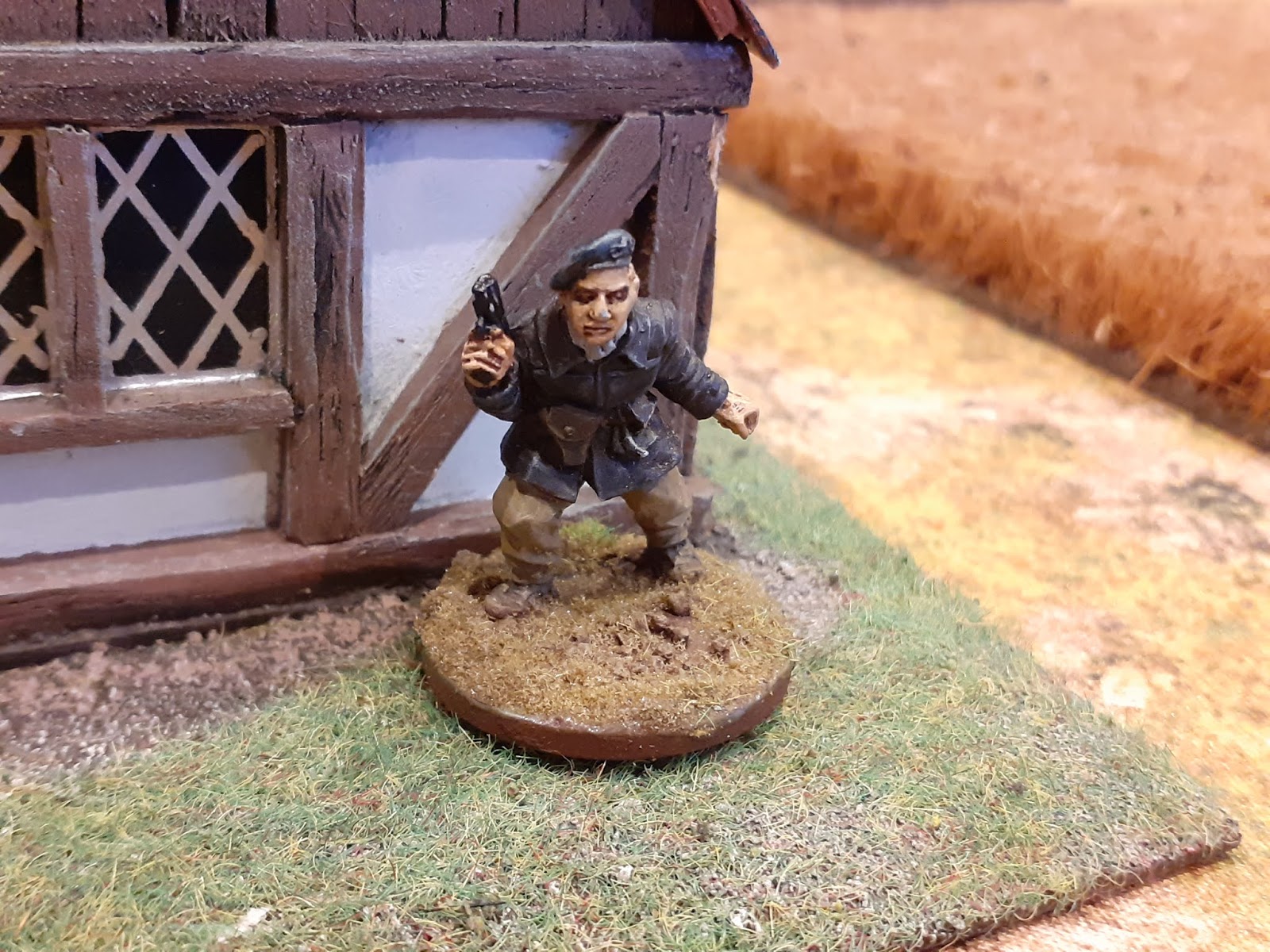 The sudden appearance of the socialist leader had thrown the fascists into disarray. 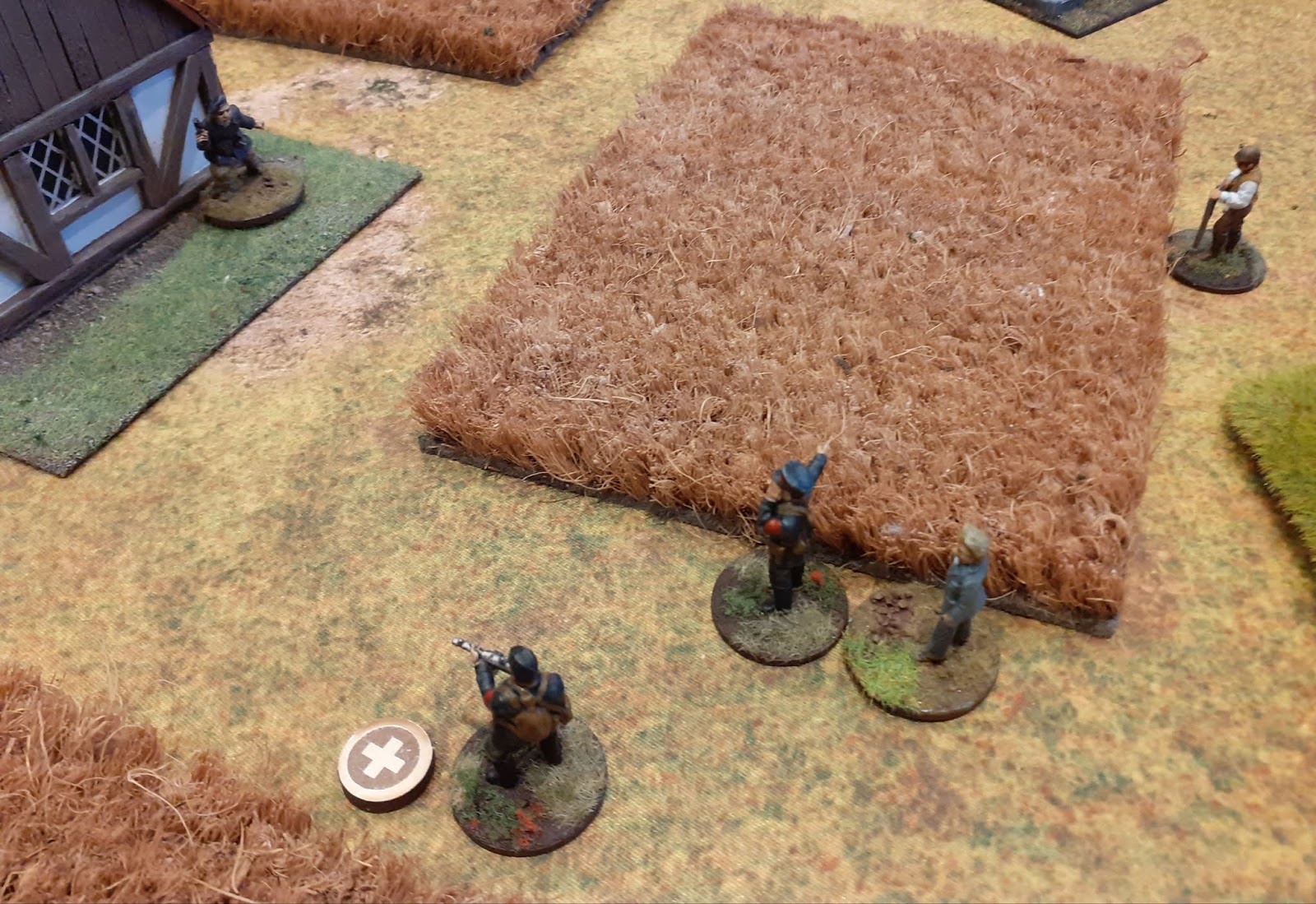 They decided to withdraw and regroup, but their shots, fired on haste, went wide. 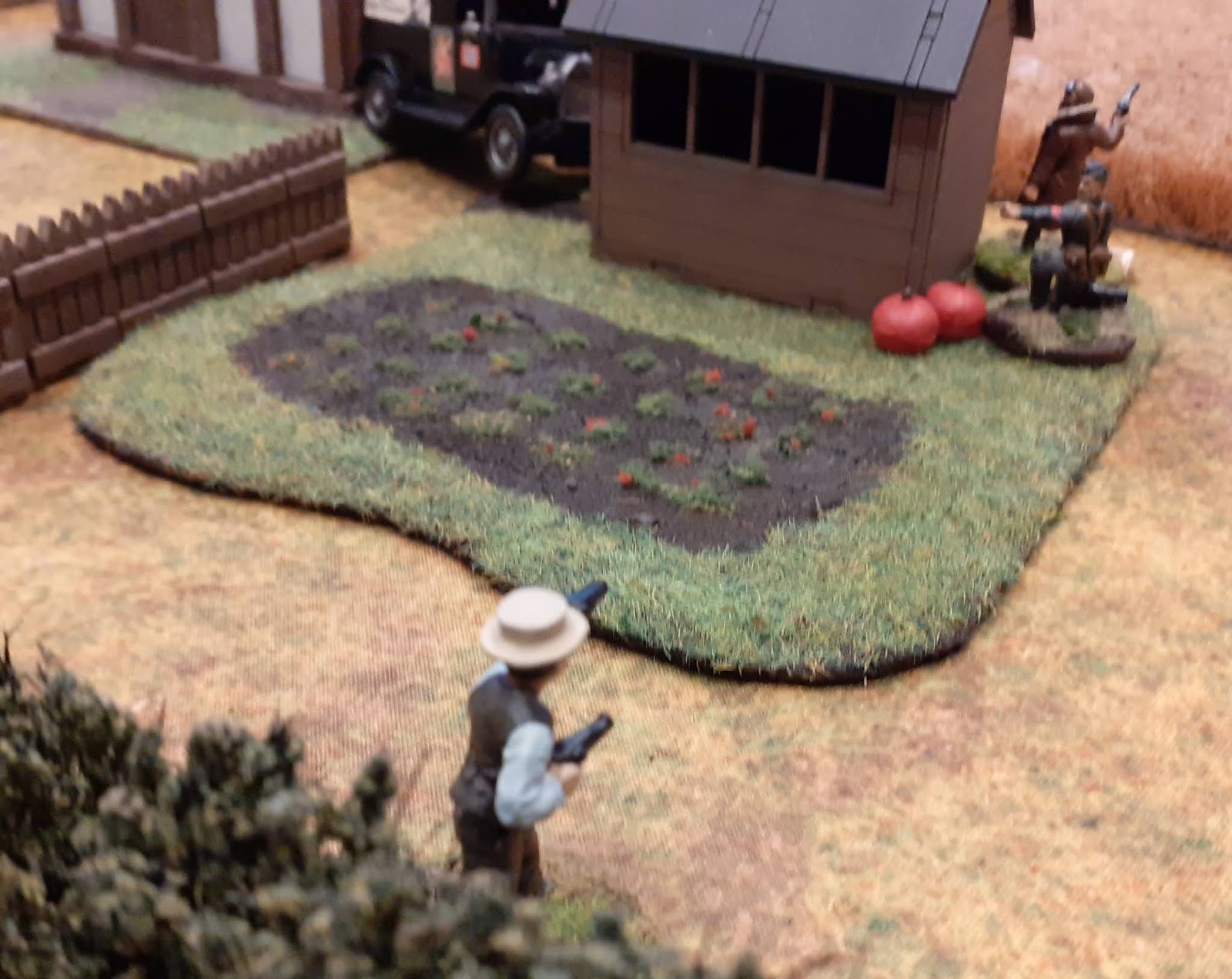 Just like the engineer, the platoon leader found himself in an exposed position. 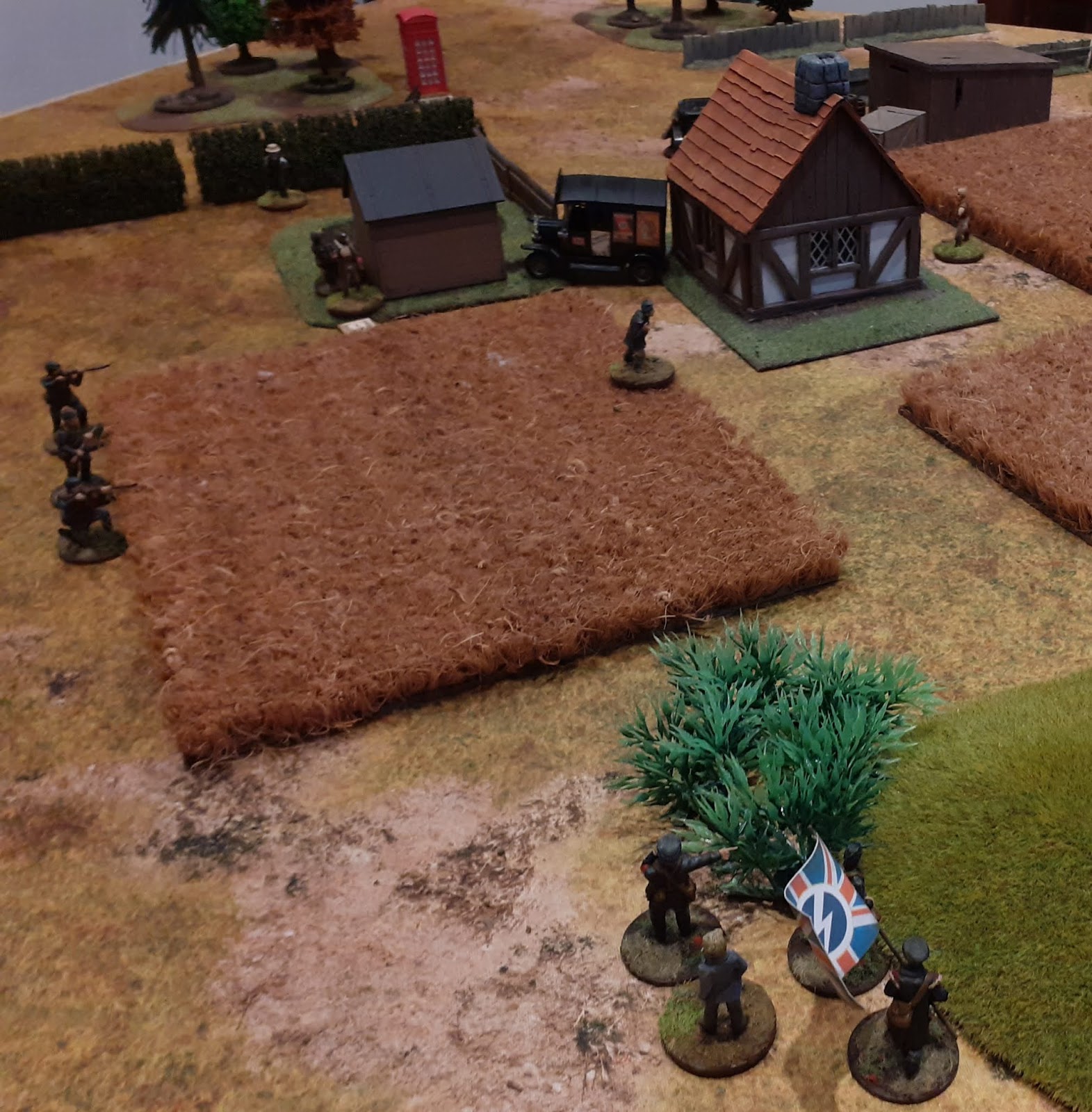 Seeing their position being overrun, the fascists backed off further. 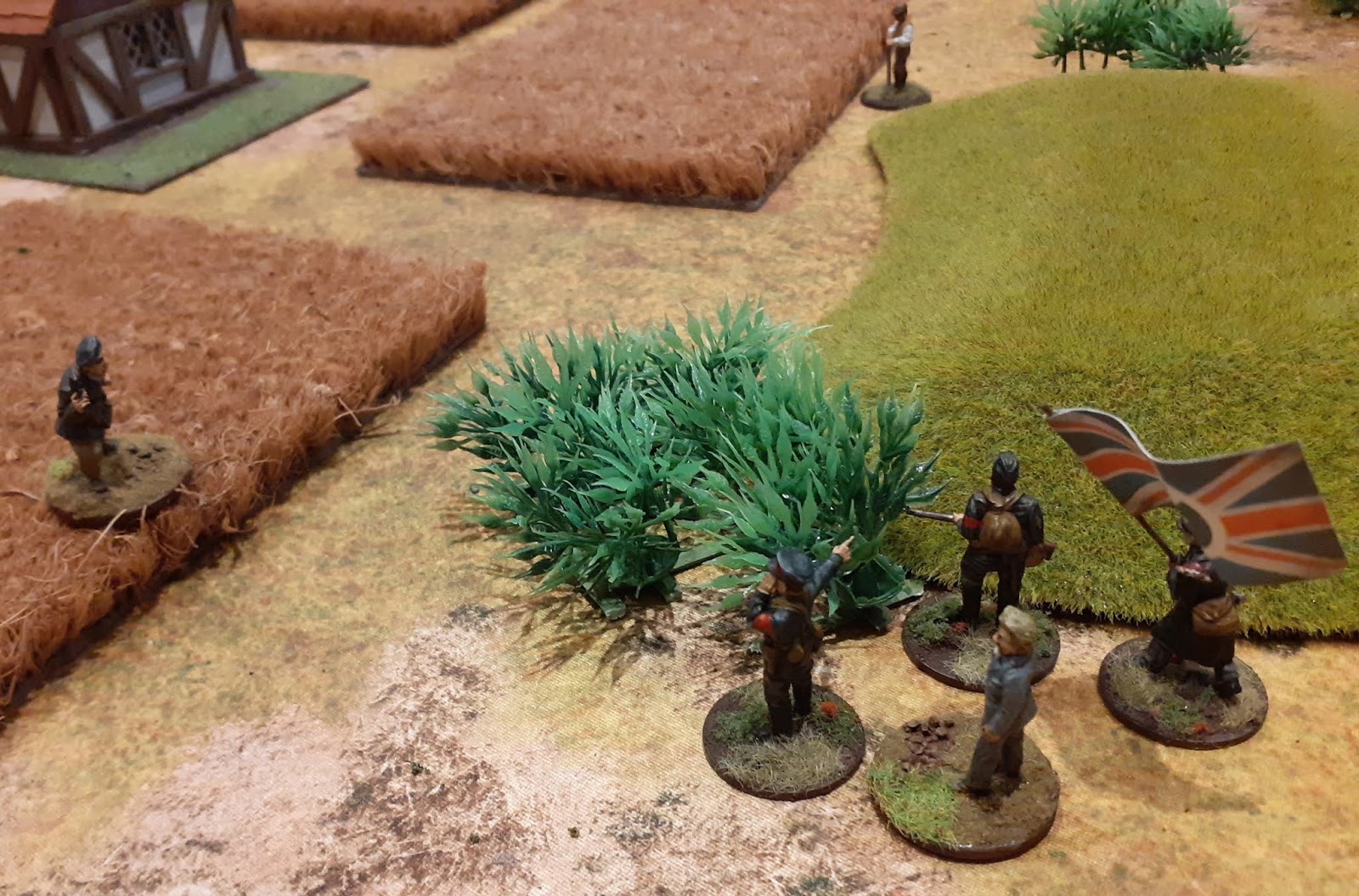 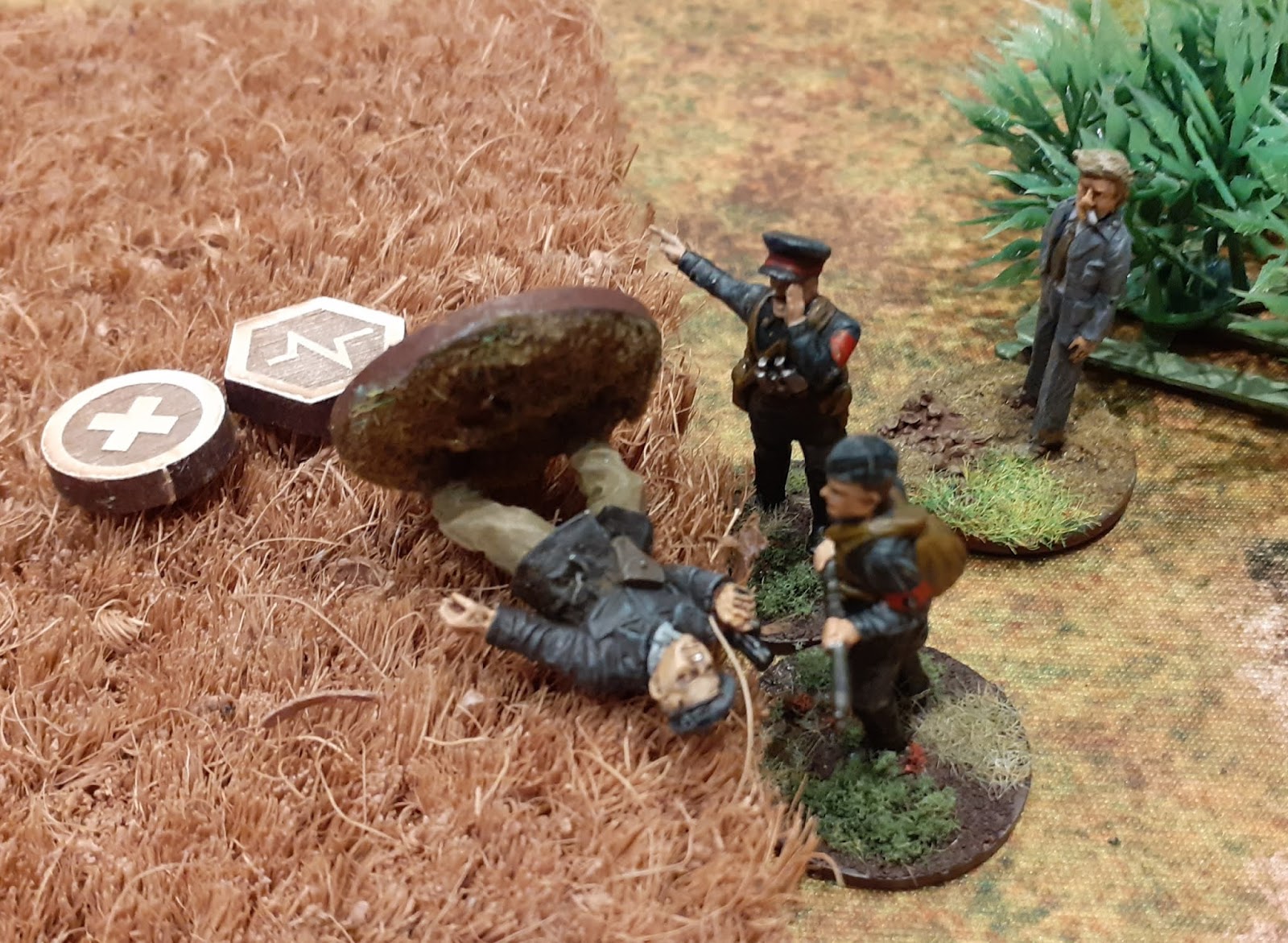 However, he was furiously assaulted by a counter attack and left stunned by repeated blows from Boot. 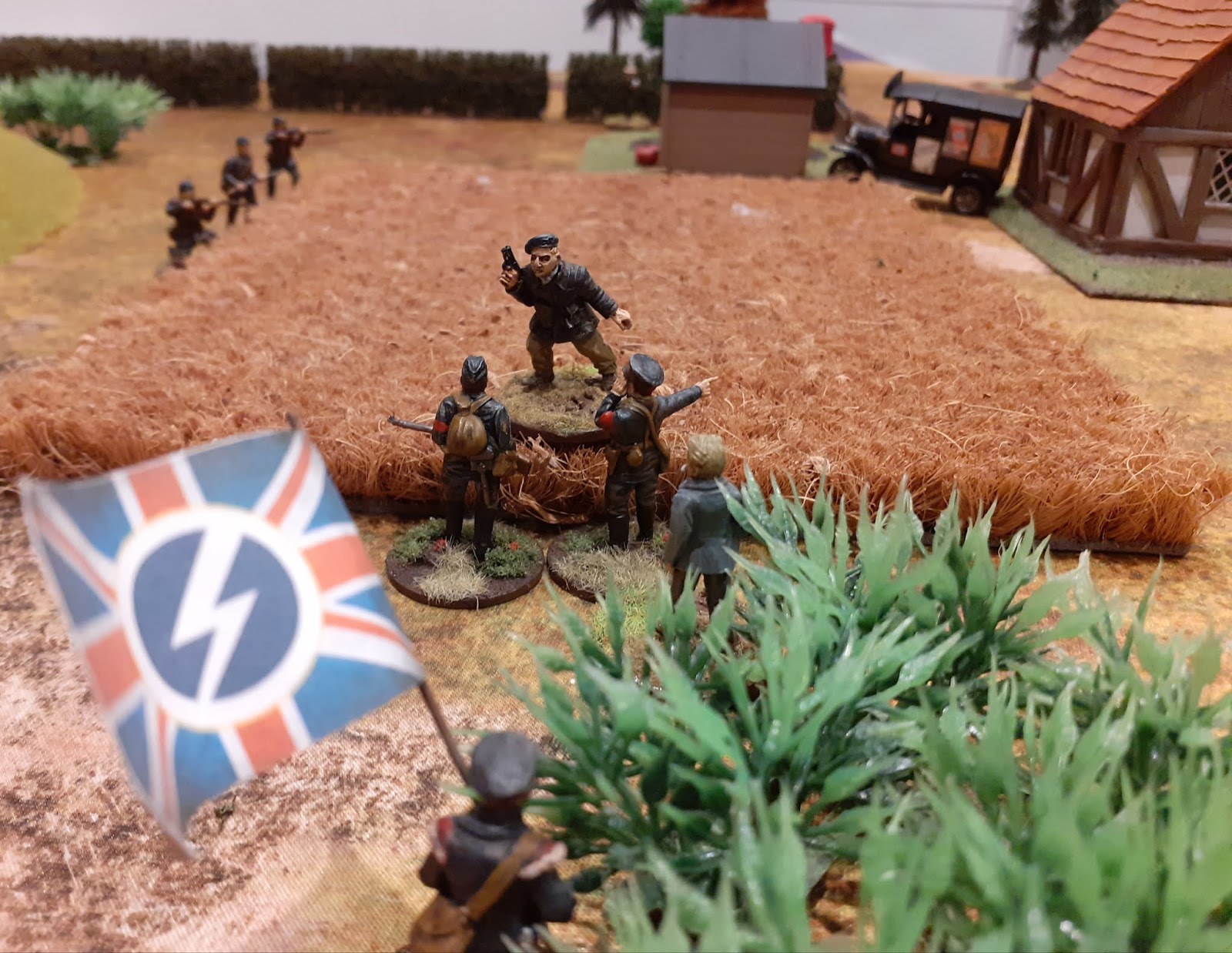 However, he managed to clamber to his feet and hold off the fascists. 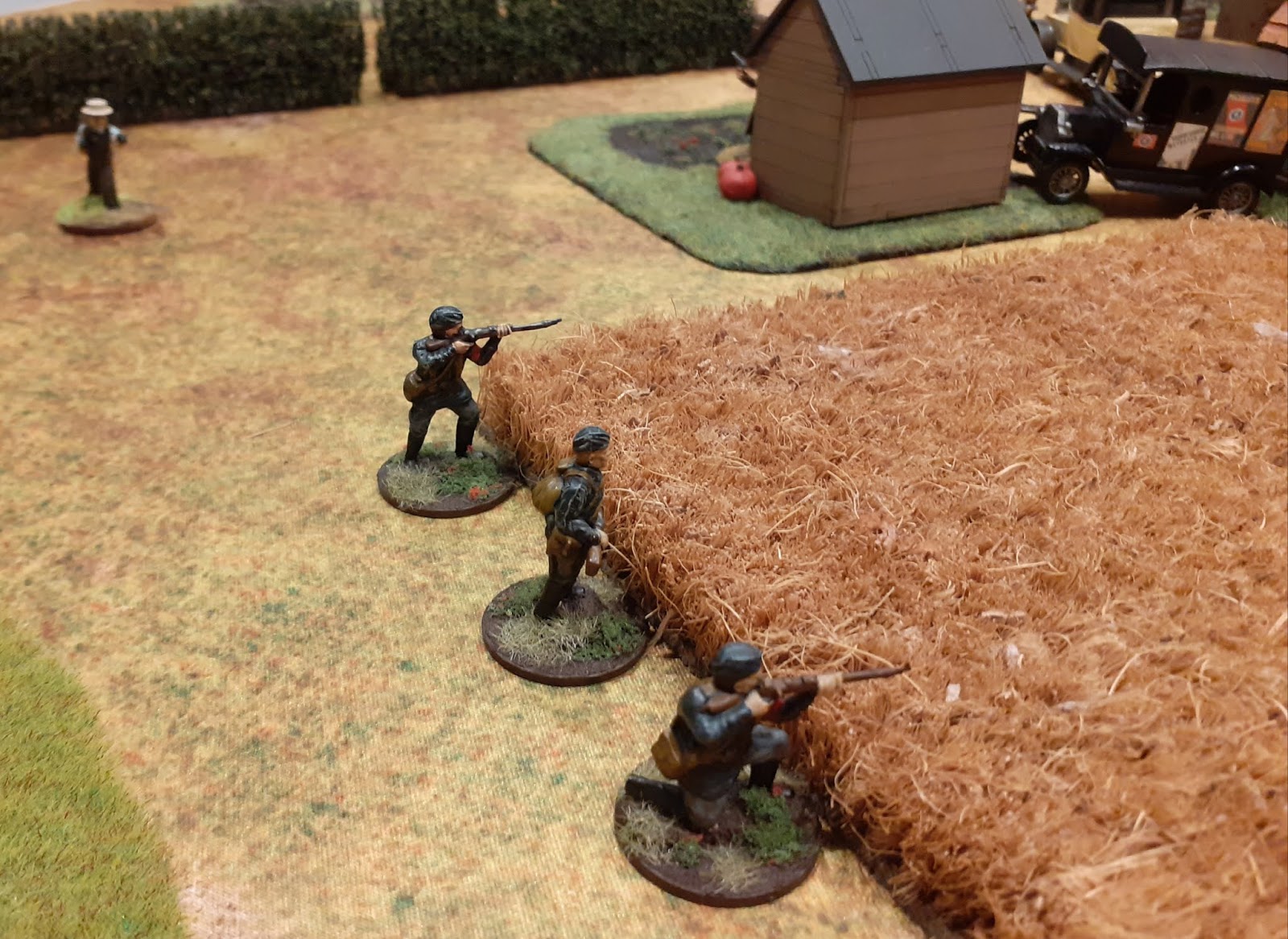 Meanwhile, the static and leaderless defensive line of the BUF was once again in danger of being flanked. 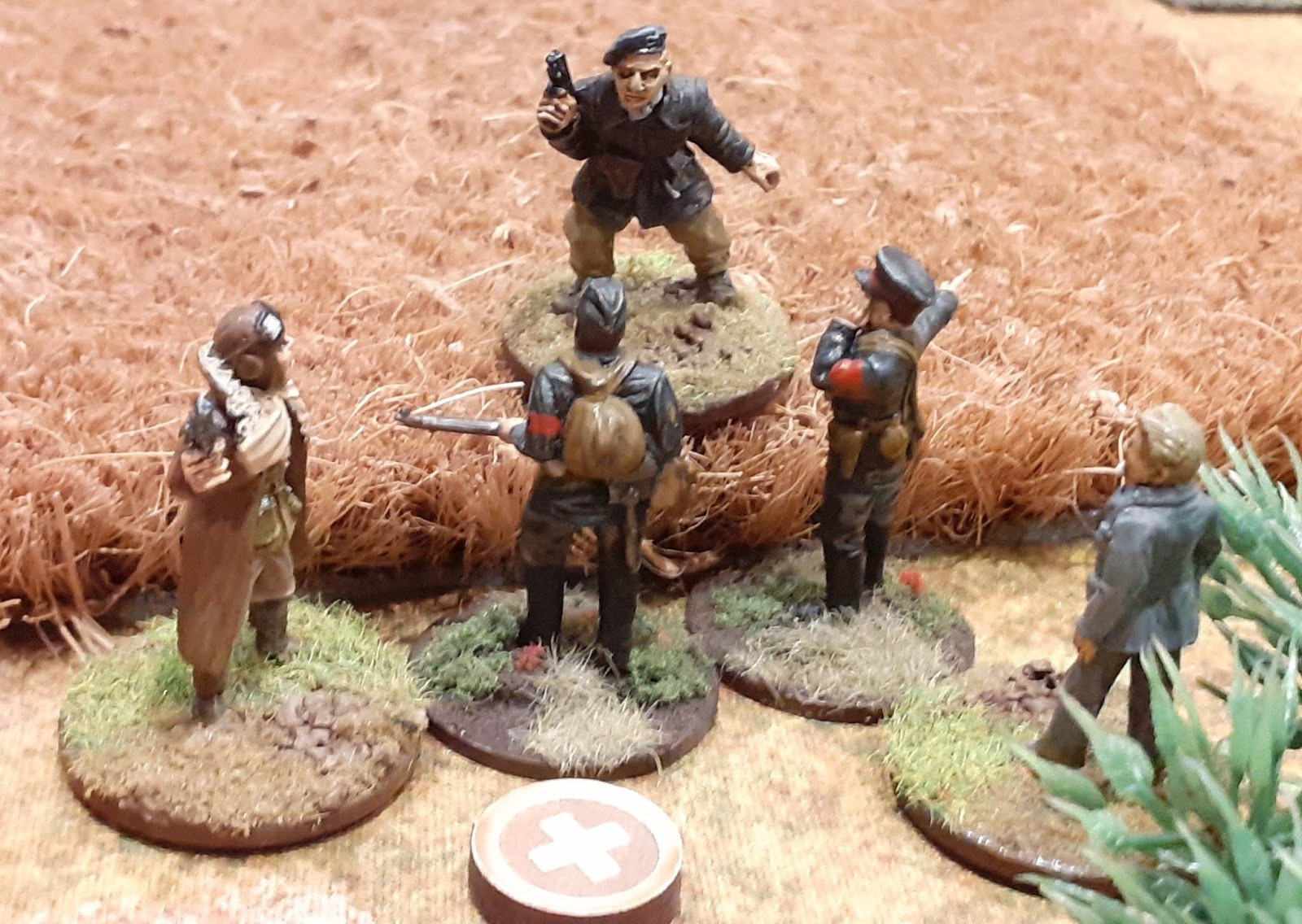 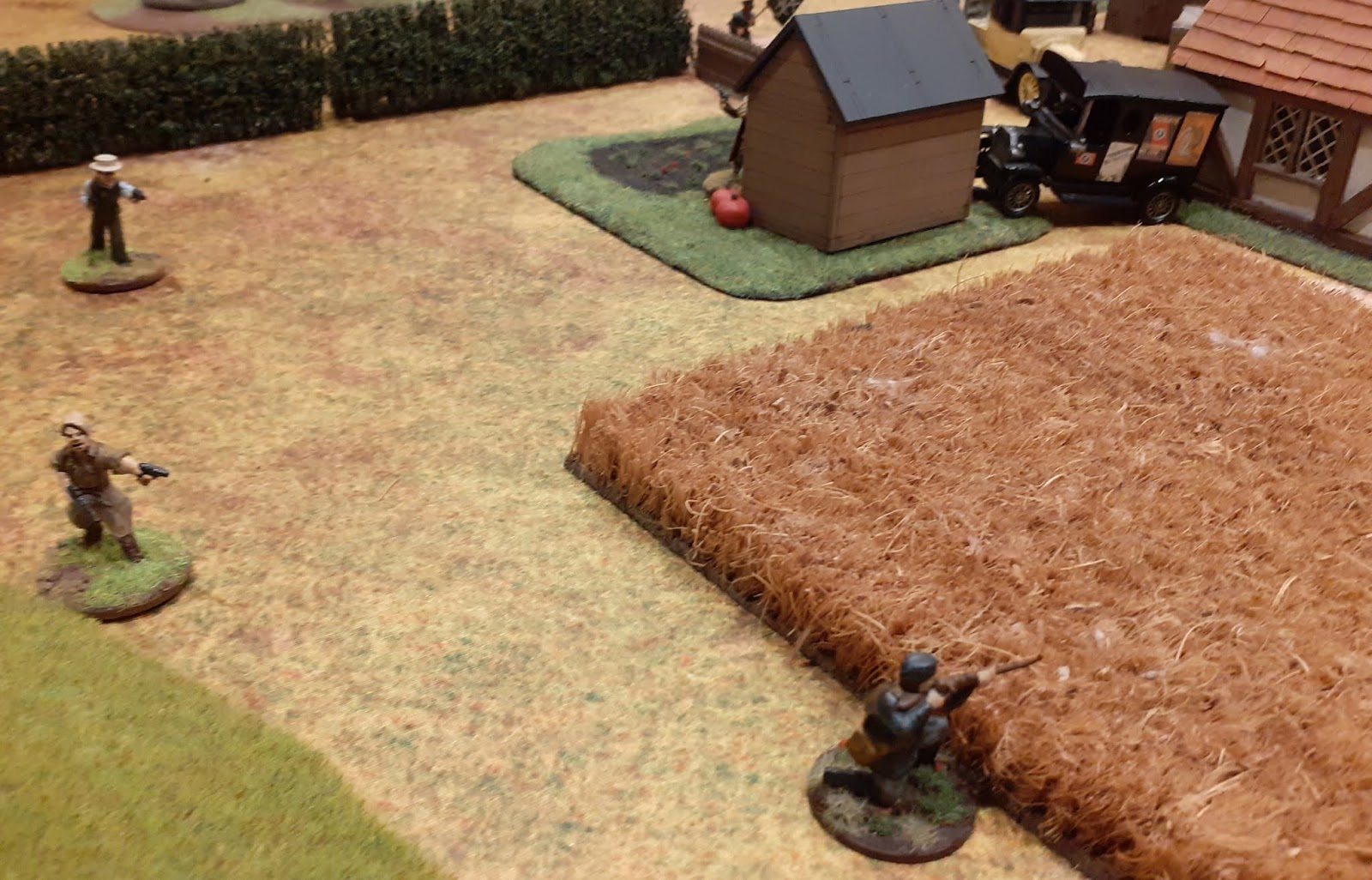 What's more, the BUF were broken as their men were gunned down in quick succession. 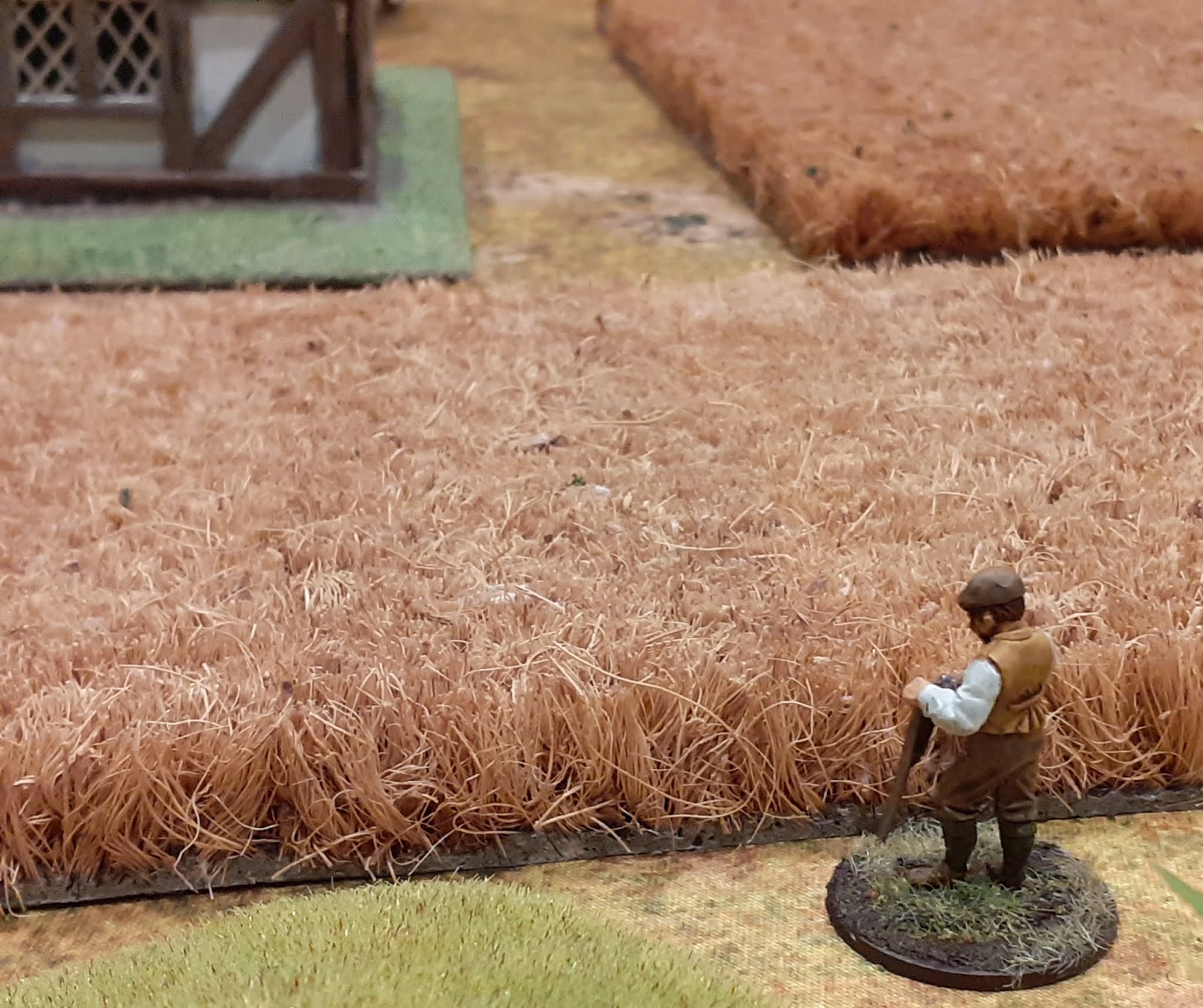 However, Mr Frederick had been overlooked. He calmly loaded his shotgun and blew away the socialist engineer. 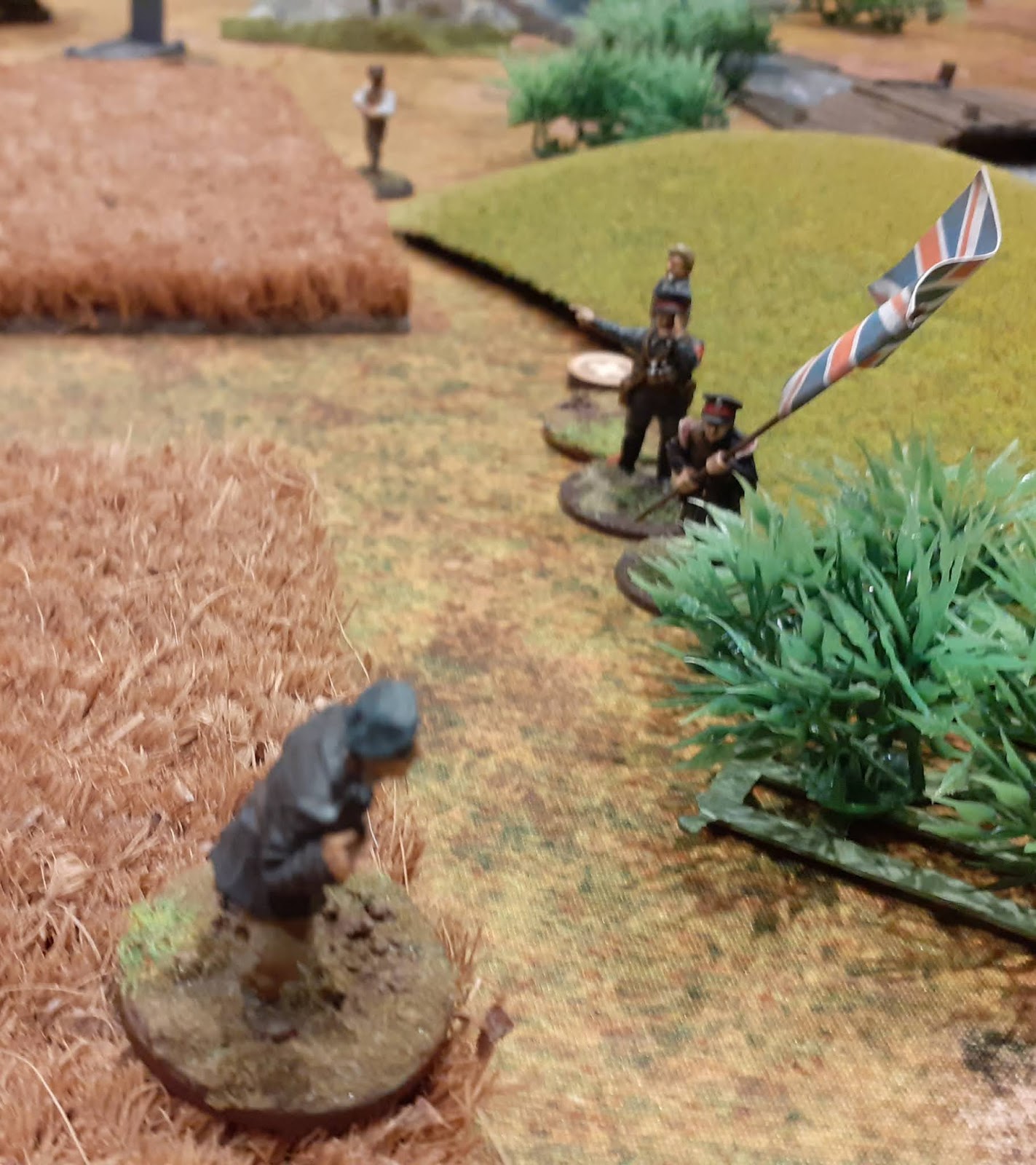 And then he reloaded and carefully took aim at the socialist leader, whispered, "get off my land," and opened fire.
BLAM!
The BUF had notionally won the day with an 8-4 victory, and had kept hold of Orwellas a hostage, but their noses and bodies had been well and truly bloodied by the Socialists. Certainly, further hostilities could be expected.
We have plans to broaden the conflict by bringing in Spy-Fi profiles (for weapons teams), Apocalypse vehicles (for wierd and wack contraptions) and Pulp gadgets, perils and countdown cards.
Posted by Kieron at 11:41