As promised, some painting.

I've recently bought Muskets & Tomahawks, a skirmish game for the French and Indian War and the American War of Independence. Now, I'm not particularly into either of these periods, although I have been looking for a system for the War of 1812 for some time. As most Napoleonic rule sets focus on bigger battles that occurred in the War of 1812 (not to mention not including rules for Native Americans), Muskets & Tomahawks seems to fit the bill for me.

As it will take time to paint up the British and American forces for the conflict, I decided to begin by focussing on some settlers and Native Americans so that I could get some games played on a small scale. So far I've only done a handful of settlers (apologies for the poor picture quality).

First up, the womenfolk (some are more timid than others): 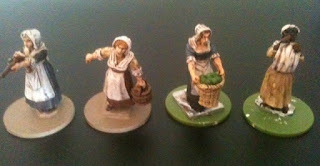 Fortunately, here's some gallant menfolk to protect them from the savages: 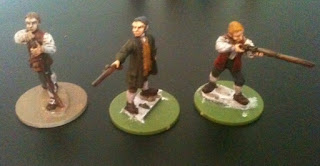 I've got about two dozen Natives and a handful of US Infantry to work. Expect to see them soon...I'll also get the bases done.

Last week I also played a game of Flames of War against Pete that had been put off for quite a while. I was fielding my Pantherkompanie (8 Panthers backed up by a Recon platoon, a Pioneer platoon and some sporadic air support).  Pete was fielding Russian Tankovy; I'm not sure what his tanks were but there were 7 big ones and 17 smaller ones (T-34's) and a small unit of Mechanised Infantry).  The scenario was Fighting Withdrawal and I was defending so I deployed first; having kampfgrupped two Panthers with the 2iC I was able to put 2 Panthers into Ambush and hopefully be able to respond if Pete massed on one flank. 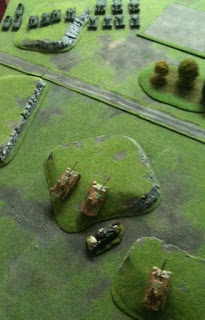 On the left I had the Command tank and a platoon of two Panthers facing off against a veritable tide of iron. 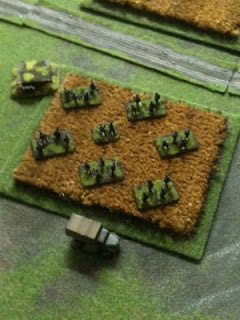 In the centre, the pioneers took up position in a cornfield to protect an objective from assault.  The also had cunningly placed a minefield in front of the objective; this actually dissuaded Pete from ever making a move for the centre.

On the right, I had the recon platoon dismounted in a cornfield to guard another objective, and they were backed up by the 2iC's platoon of three Panthers. 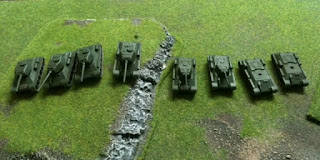 The Russian horde began to advance steadily on both flanks, taking casualties from concentrated Panther fire as they came. 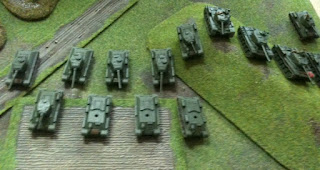 The arrival of my ambushing platoon of Panthers, allowed me to inflict a devastating barrage that all but wiped out the company of T-34's on the right. 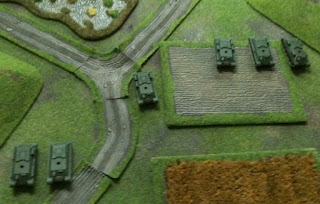 In return, the Recon platoon and the 2iC's Panthers took heavy losses from the Russian heavy tanks. However, the need for accuracy prevented the heavies from advancing. 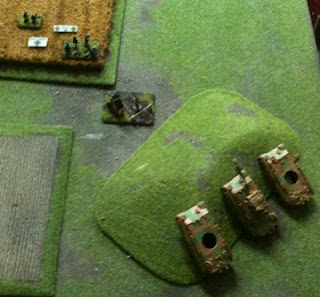 Meanwhile, on the left I was failing to inflict enough casualties and the Russian armoured infantry raced around my flank and dismounted ready to assault. Fortunately, I was able to pin them and they kindly decided to fail their motivation roll to un-pin. 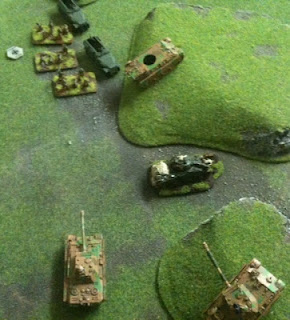 However, the Russian advance continued apace, slowed only by the fact that the armoured infantry failed to un-pin again. Nevertheless, it seemed only a matter of time before they made a push towards the objective. It seemed like all was lost. 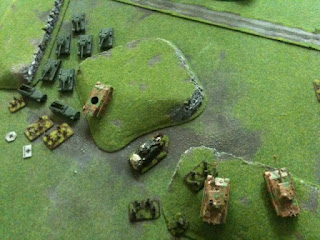 Then the cavarly arrived...well, the Luftwaffe. Not only did my Stukas arrive to carpet bomb the T-34's, but my Pioneers machine-gunned the Russian infantry into submission and the Panthers finally won their duel with the Russian heavy tanks.  Three failed motivation checks later and the Russians were below half strength, a fourth failed test and the Russians retreated, the battle was won. 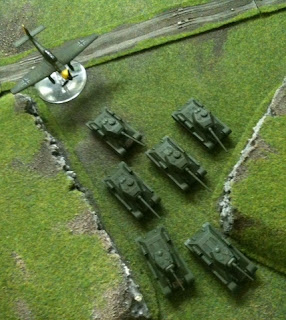 This game was a load of fun and it was great to finally match my Panthers against something other than a horde of infantry. It was touch and go at the end, as due to fact I was having to remove units, I only had a single Panther left on the right to hold up the Russian heavy tanks that had begun to move. I'm also conscious that I was saved by three factors: the timely arrival of my aircraft, Pete not advancing as quickly as he could have and the fact that he didn't roll a successful motivation test all game.

I confidently expect aircraft, artillery and the squeal of wheels the next time we play.
Posted by Kieron at 02:19