If you would describe yourself as a historical wargamer, look away now. Seriously. You're not going to like this.

Pete has been trying to get me into Bolt Action and I've recently relented, scooping up an eBay deal of 40 Soviet Infantry, an Anti-Tank gun and a T-34 for £30. Cheaphammer lives!

Anyway, I've obviously not got them painted yet and so when asked for a game of Bolt Action, I was forced to either play with unpainted figures (shudder) or, more satisfyingly, my almost historically appropriate for WWII VBCW force.

What follows is a report of a battle that can't even be described as a what if:

There's a very good fan made VBCW list for Bolt Action knocking about the net. A quick Google should turn it up. It allows for Heath-Robinson contraptions, cavalry and flags; all the key components of VBCW.

The scenario we rolled up was 'Maximum Attrition,' which is essentially a pitched battle in any other rule set. The varying activations make it tricky to describe the action as it happened, so I'll simply go for turn summaries. 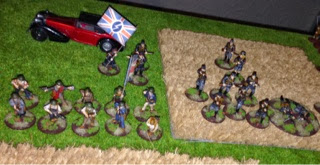 With a screech of brakes and the banging of car doors, the vile fascists of the B.U.F. advanced into the crop fields to take advantage of the cover whilst on the other side of the farm the somewhat less fascist men of the Wehrmacht advanced stealthily through the woods. Desultory fire was exchanged to no effect. 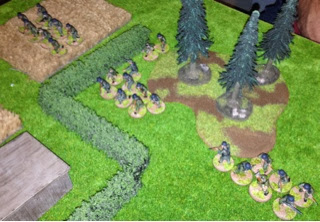 Out by the old barn a Kubelwagon motored up and the Medic in the back seat tore up the Geneva convention by using the vehicle's MMG to shoot up a B.U.F. Truck, forcing the Assault Section inside to take cover behind the hill. (We played this wrong and the Assault Section should have taken hits.) 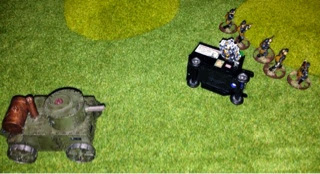 In response, the improvised Steam Tank, the Wortley Dragon, returned fire with its HMG, tearing apart the German vehicle and sending the Medic scurrying for cover in the ruins of the old barn.

The Germans continued their cautious advance, firing sporadically, succeeding only in pinning some of their British opponents.

The B.U.F. Cohort commander advanced to meet the Germans, returning fire and taking up the best positions the can find. 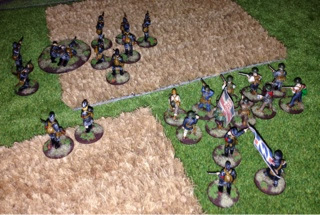 The Wortley Dragon turned in toward the bulk of the enemy, whilst the Assault Section recovered their nerve. However, in the old barn, a German sniper took up a threatening position (we played this wrong too, he should have begun on the table) from where...he would fail to kill anybody all game! The German advance continued into the teeth of the enemy guns, which opened up, inflicting heavy casualties (despite the presence of the Medic) on the squads advancing through the woods.

Taking advantage of the inability of the B.U.F. Rifles to follow orders (partially due to poor placement of my Officer), the German squad that had taken up positions behind the crates poured fire into the Rifles, inflicting significant casualties.

In a daring move, the Assault Section finally got their act together and, using the cover of the Wortley Dragon, ran headlong towards the Germans in the woods, spraying SMG fire...to no real effect. 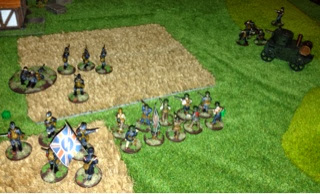 The Assault Section continued with their death or glory charge and were partially successful; in that they died. 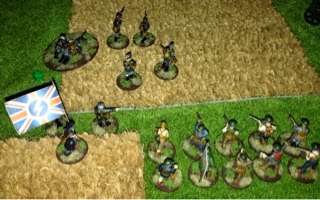 The rest of the B.U.F. force again failed to make any real impact upon the enemy and even the imposin presence of the Wortley Dragin failed to deter the determined enemy, who again poured fire into the Rifles. 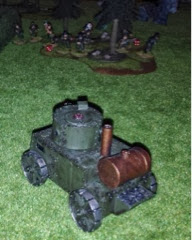 With time and guns running out, the B.U.F. were handed a slice of luck when the German Medic was the tragic victim of a friendly fire incident and riddled with MG42 rounds.

Seizing this opportunity, the entire British force opened up on a depleted German squad, forcing them to flee.

To protect the now lone LMG gunner from the Rifles, the brave Officer strode into the line of fire. 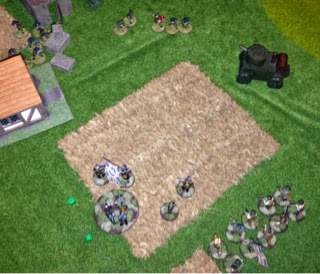 With the B.U.F. once again unable to motivate themselves to attack, the Germans massed for an assault and leapt upon the isolated Officer and Banner Bearer. With that both forces withdrew, licking their wounds. 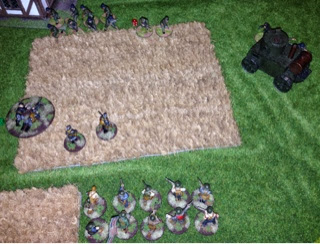 A draw. I got a bit lucky with the friendly fire incident and foolishly wasted the Assault Section, however, these factors were balanced by the fact that Pete was cheating by firing with his MG loaders. I also forgot the B.U.F. special rule halfway through the game, which would have meant passing some of those failed morale tests.

So, what did I learn about Bolt Action?
- The game is fast and fun
- Tanks are imposing, but can't really do much about lots of infantry
- Soft skin vehicles are extremely vulnerable and should be used with caution
- Snipers have the potential to be devastating
- Generals need a plan, otherwise the battle bogs down into something akin to the early days of WWI
- Officers need to stay close to their troops to keep them moving
- Cover is important and we probably needed more terrain on the table
- Matt and I will be likely to use Bolt Action for VBCW
- I need to start painting Russians
Posted by Kieron at 13:38