We finally returned to our long postponed Firestorm: Lorraine campaign for Flames of War, and as I was taking over direct control of the Germans, I thought that I could surprise Matt's Americans as they attempted to surround Metz by bringing a surprising amount of Reluctant Trained troops.

Yes, that's exactly what Hitler thought in the real campaign in 1944. It didn't work for him either.

My forces were roughly as follows:

Yes, I had no artillery or AA guns (largely because I don't own any), but I figured I'd be fine if Matt brought his tanks I'd stand a fighting chance as I was packing a comfortable amount of anti-tank fire. I was aware that if he decided to bring his Parachute Company with Air Support, I'd be struggling to kill enough of them fast enough.

His forces were (as I remember):

The scenario that we were playing was Breakthrough, with me defending. Here's how we deployed: 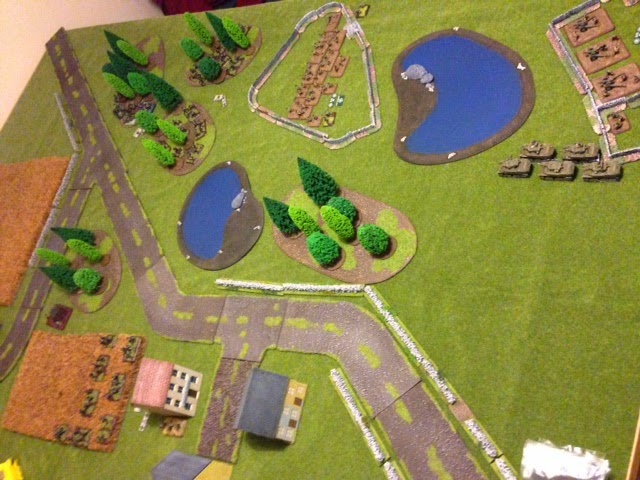 I deployed two of my infantry platoons, and the pioneers in the woods to the north, with another platoon in the fields near the closest objective. The conscript unit were stationed in the village as a speed-bump. My Panthers (kampfgrupped into two units) and Marders were held in reserve.

Matt massed his troops as if he was completely unafraid of the template weapons I didn't have. His artillery were obviously at the back, with their spotter in the central woods, ready to rain down destruction on my emplacements. The Stuarts were neatly parked ready to rush towards the road and one of his parachute units was deployed dangerously close to my infantry; clearly gearing up for an assault.

I immediately noticed that I'd buggered up deployment. Not only were my Reluctant Trained infantry about to get eaten by some of the best infantry in the game, but I'd put the one unit without Panzerfausts in the village as the 'speed bump'. I was even more pessimistic about the outcome of this game than usual.

However, on the up side, it was cloudy so the USAF would be arriving immediately...well, at least until turn two. 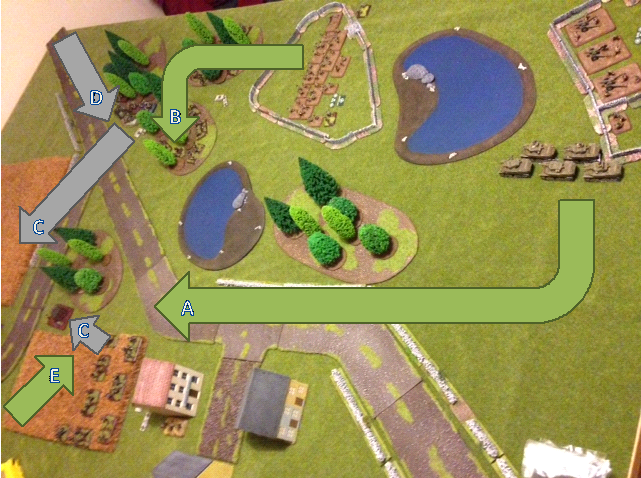 I'm not sure I've been battered like that in a long time. It was a perfect storm of a one-trick-pony army + bad deployment + awkward scenario + late reserves + poor shooting + capable opponent = butt-whipping.

I have always struggled against Matt's Americans; mainly because he has a lot of options that he knows how to use well, so I can never really get the drop on him. I still need to round out my German army as I'm forced down and all attack or all defence route by my only armour being so expensive. Curiously, I don't have the same problem playing against his Germans, but he'd freely admit that his Armoured Pioneer Company with Tigers and Flak 88's isn't exactly an optimal force.

Anyway, back to the campagin. Not only did the Americans win, but they destroy my Firestorm troops and have encircled Metz. I suspect that the hammer will fall there the next time Matt attacks. For me, I need to win initiative and attack somewhere that I'm sure I can win, in order to put the Americans on the back foot for a bit. 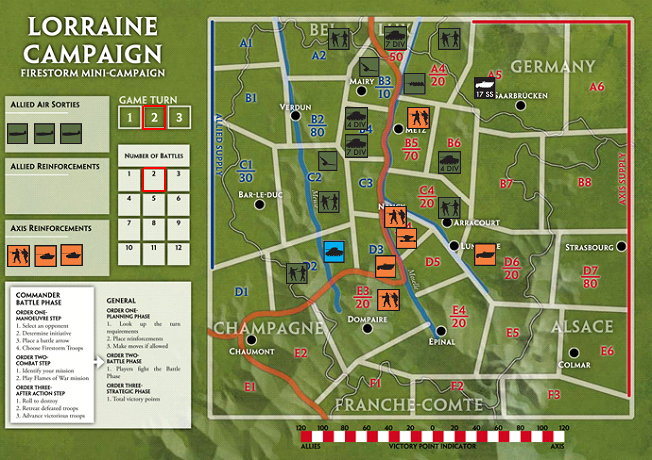 Oh, and I need to avoid playing like a numpty too!