Peter came over for a game of BMG last night and brought his burgeoning Watchmen crew featuring Ozymandias and a partially painted Rorschach. To bring his crew up to 200 points he borrowed one of my cops and ran the crew as if it was Law (i.e. the cop got Law equipment).

The scenario we drew was Plunder, which is a rush for objectives in the centre of the board. We selected strategies, which naturally led to both of us taking Snitch to cancel each other's Snitch (is there anybody who doesn't do this?) and with my one remaining point I purchased Patrol to give Catwoman a head start towards her primary objective loot counter. As Ozymandias is a Mastermind, Pete had three strategy points to spend and chose Ambush and Secret Objective.

I deployed Catwoman and Poison Ivy near the factory gates to give them a clear run at objectives in the hope that I could grab objectives quickly to gain a bonus 4vp's as per the scenario rules. However, as Pete's crew consisted of an Acrobat (Ozymandias deployed in the park), an Undercover Cop (behind the stretch Limo) and a Hidden nutter (Rorschach behind the blue bin). 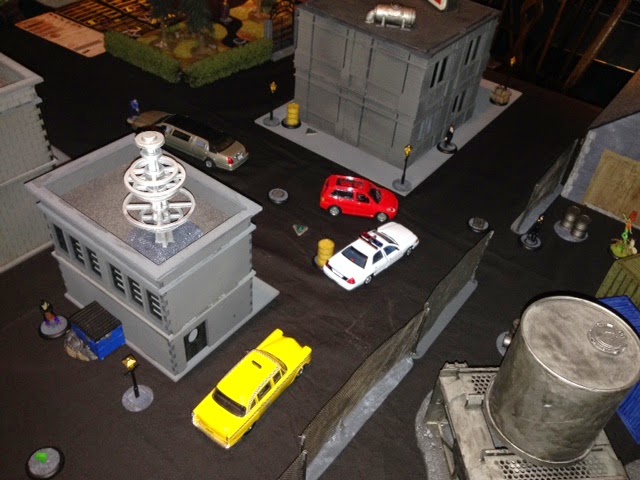 Turn 1
The Watchmen took the lead and made straight for objectives. Ozymandias and Rorschach headed towards the riddles and, using Mastermind and Detective respectively, managed to solve both of them (Pete perhaps made an error in not waiting in order to gain the scenario bonus for controlling two objectives), and Agent Ron managed to grab a Titan dose.

Predictably, Catwoman made straight for the loot counter, whilst Ivy ran as fast as she could towards the second Titan container, keeping the cars between her and Agent Ron's gun.

With the Watchmen getting closer, Ivy decided to mix things up by summoning her plants. The Creeper plant emerged (with its Titanic Mutation) next to Agent Ron, who also decided to take his dose, contesting the objective. 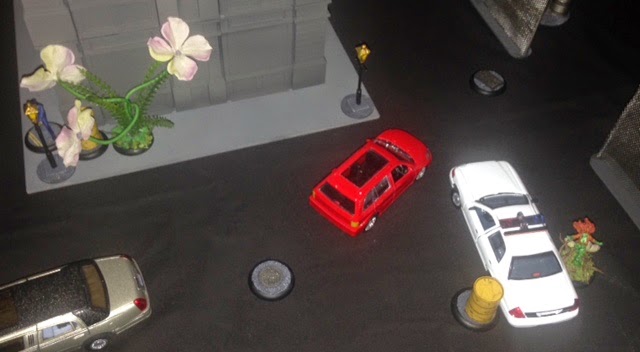 The Spore Plant came up in an alleyway next to the Watchmen's Ammo objective. Not only would it at least contest the objective, but it also had good lines of fire across the centre of the table. 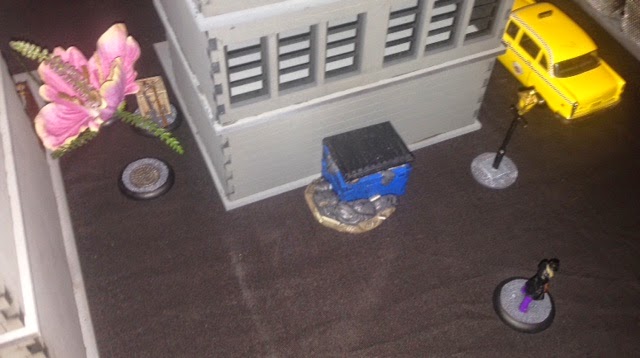 In response to this new threat, Agent Ron immediately went in to attack the Creeper Plant. His blows were ineffective, but so were the retaliatory strikes from the Plant as well as the Spore Plant's shots from across the road. 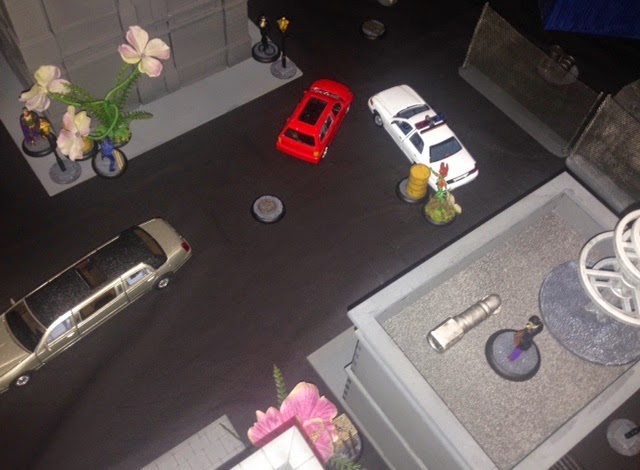 Ivy grabbed a Titan Dose and some victory points whilst using Discourage on Agent Ron. Meanwhile the rest of the characters moved into position for the next turn. Rorschach bat-clawed up to a roof ready to swing into action, Catwoman brought her loot to the corner, whilst Ozymandias stopped by the Titan Container to also grab a dose. Whatever happened, things were going to get bloody in the next round.﻿

The Watchmen took the lead and Ozymandias bypassed the fight between Agent Ron and the Creeper Plant and charged Catwoman. In what was to prove a pattern for the game, Ozymandias did not prove to be as dangerous as he looked and only managed to land two hits on Catwoman for four stun damage, leaving her still able to act effectively (this would prove crucial).

The Creeper Plant attacked the Discouraged Agent Ron and managed to land a successful hit, Agent Ron fluffed his response and then was knocked out by a successful shot from the Spore Plant. 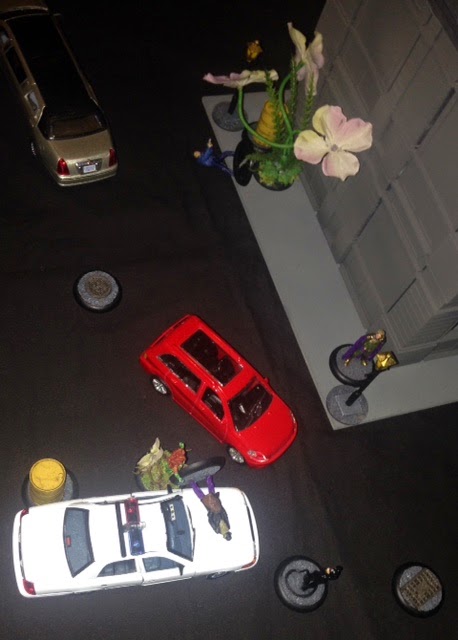 As if things weren't bad enough, Pete's turn got worse when Rorschach didn't move far enough on the rooftop to be able to Bat-claw into combat. This left him in charge range of the limping Catwoman (still hanging on grimly to her loot), who managed to not only hit and wound, but also rolled a knockdown on Rorschach, leaving him prone and in seductive stroll range of Poison Ivy.

Sure enough, a Titan Dosed Ivy sauntered up and succeeded in grabbing the vigilante and planting a Mortal Kiss on him, taking him out of the game.

As if things couldn't get worse for the Watchmen, Poison Ivy ran from the scene of the crime and used Chlorokinesis to get out of Ozymandias' charge range. Ozymandias proved to be extremely susceptible to  bad dice as Catwoman succeeded in blocking his few successful attacks and then also running from him, taking her loot with her. 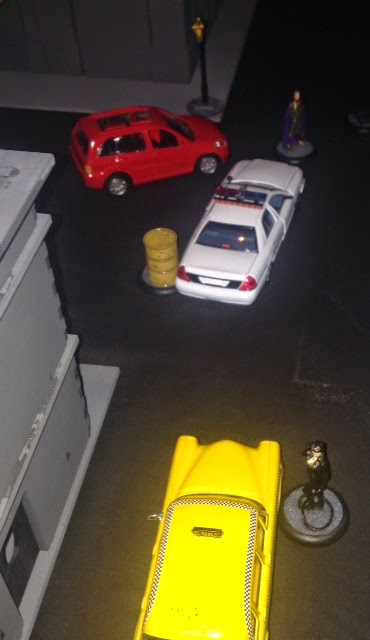 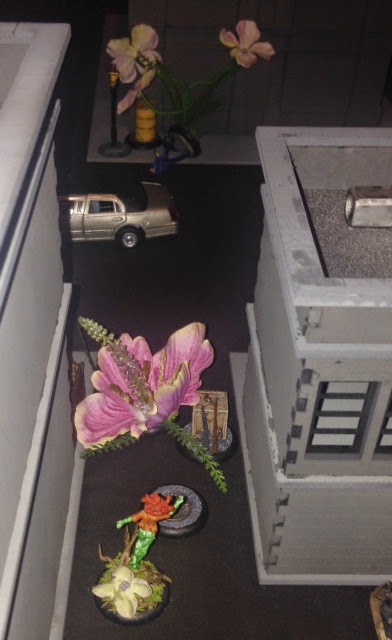 The two plants flailed at the unconscious Policeman, slowly working his stun damage into blood and pushing him inevitably towards removal.

With the Sirens making themselves scarce, Ozymandias turned his attention towards helping out the downed Agent Ron, but ultimately failed to do any significant damage. Ivy rushed in to finish of the Policeman and the Creeper Plant flailed around ineffectually. 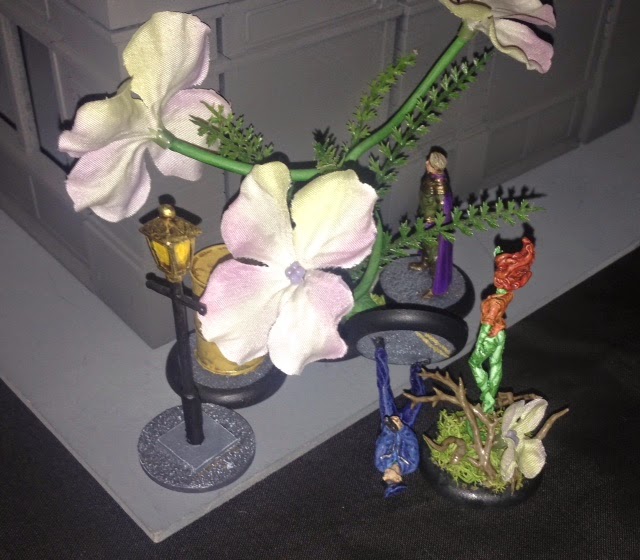 At the end of the game, the whole Poison Ivy crew was still standing, Catwoman still held her loot and Ozymandias was forced to retreat, having lost all of his allies.

Wow, that got ugly quickly. Turn 3 really went badly for Pete and Ozymandias' poor rolling prevented him from clawing back any points. I was surprised to discover how lethal Ivy is against the incapacitated and I enjoyed using the Plants as  spoilers.

In retrospect, it was probably a bad idea for Pete to split up so much, and he might have made more headway by ganging up on my immobile plants before coming after the girls. However, when a turn implodes on you, there's not a lot of tactical thinking that will fix it. I think the Watchmen really take some getting used to, so I expect games against Pete to get steadily trickier.

For me, I found the Ivy crew interesting and fun to use, presenting a really different experience from the other crews I've used. I suspect that Ms Isley may be invited out again...