Whilst everybody else in the world was at Salute in London (or at least it seems that way from my blog feed), I managed to squeeze a game of Batman in with Matt, who hasn't played in over a year.

We arranged a 200 rep game, pitting my unused Two-Face 'gang' against his proxy-fest Law band. Matt has been working on his own rules for a SWAT team game (called 'Flashbang') and so his collection facilitates enough models to make an appropriate crew for BMG - you may have notice that I'm not a stickler for officialdom, so we got our game faces on and prepared to face off over a Plunder scenario. 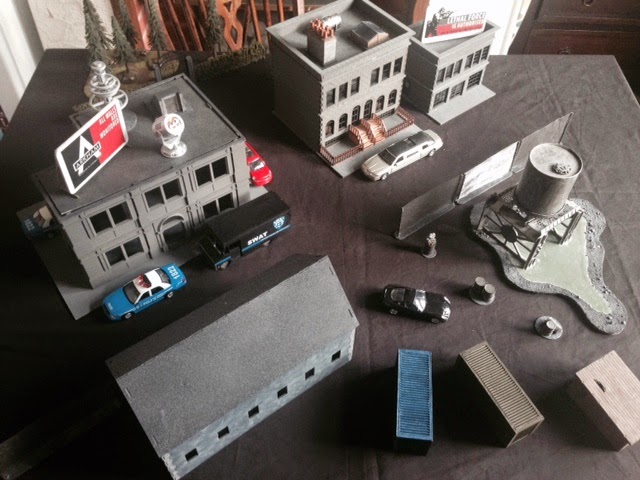 I set up the terrain to try out a diagonal road layout. I was also pleased to get all of my new terrain pieces on the table: warning signs; roof furniture; SWAT van, and newly purchased police cars.

I gave Matt the choice of ends and he, fittingly, chose to deploy by the Police Station (with all the Police vehicles around it), whilst I would be attacking through the factory. 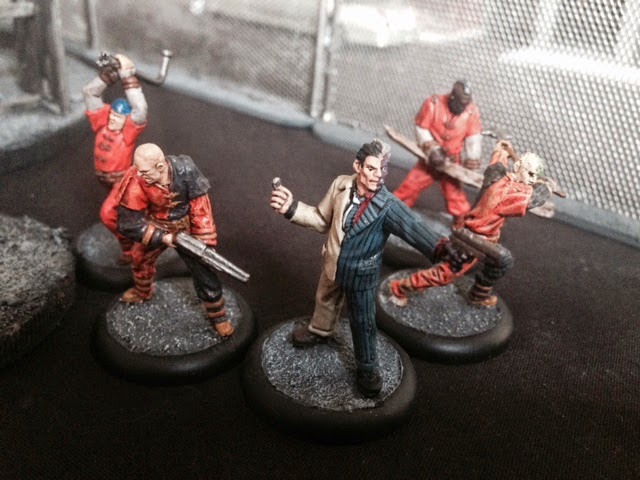 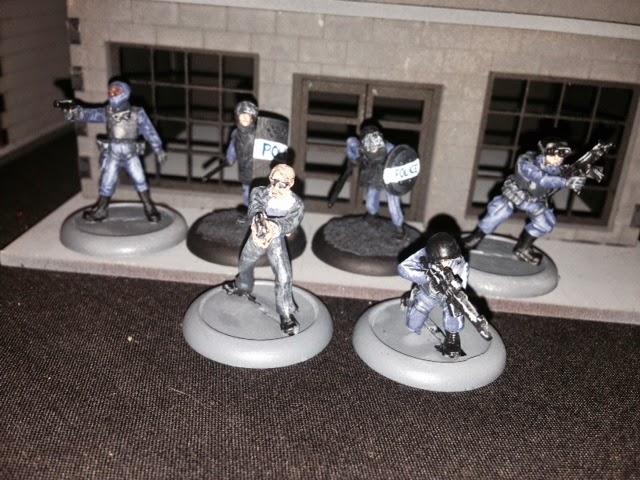 With the wire fence bisecting my deployment area, I decided to split my force. Two-Face, Mottom and Tube Prisoner took position in the refinery and eyed a Titan Container and Loot Counter. 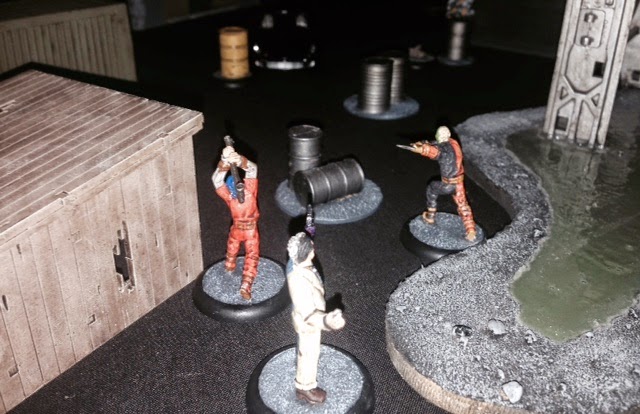 Meanwhile, Rottor and Big Stikka made the Ammo Crate by the Limo their target.

At the other end of the table, the Police also split up, with  Gordon and the SWAT team heading up the main street, whilst Agent O'Connell led the baton cops round the back streets. 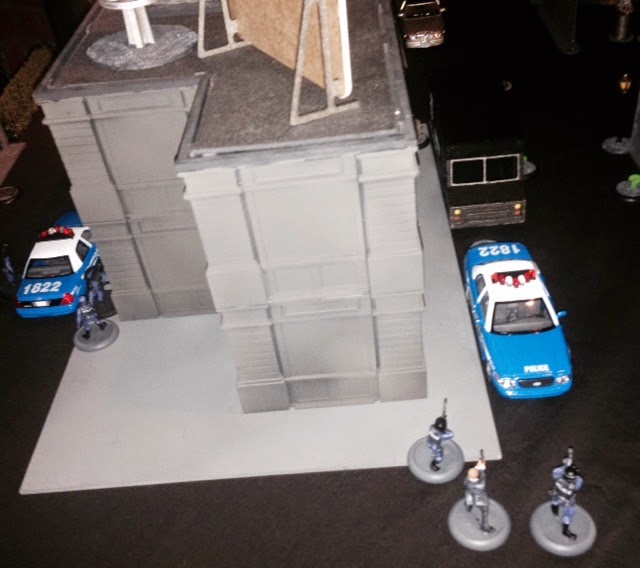 I won initiative but let the Police take the lead. Two-Face made good use of Inspire to allow his crew to move quickly to gain control of the Titan Container and Loot Counter. 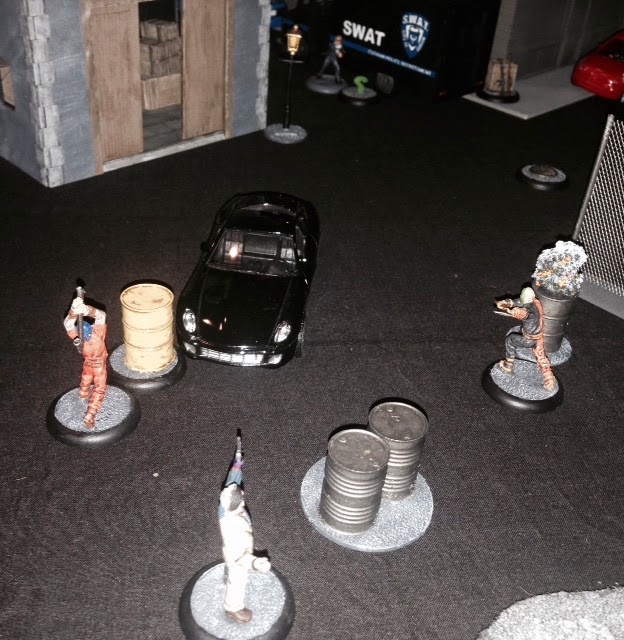 However, Rottor's cry of "Follow Me!" fell on deaf ears as Big Stikka struggled to drag his big stick past the Limo. 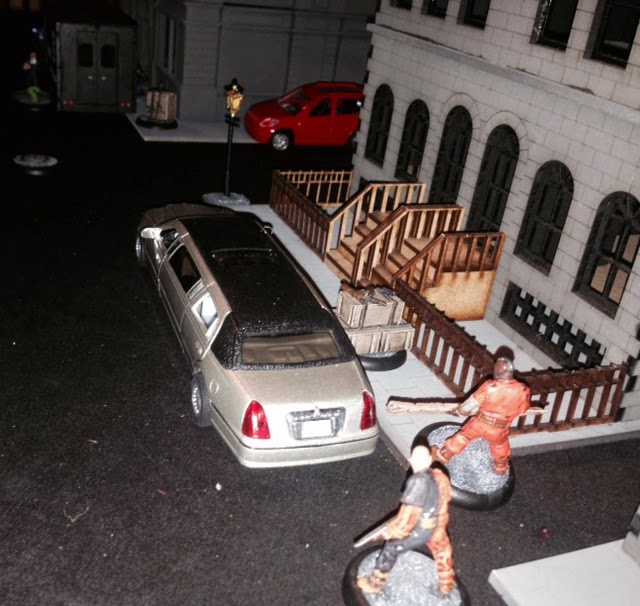 Matt began the game with what be the opening salvo in an evening of terrible rolls as his cops rolled low for movement and failed to get control of either their Titan Container or Ammo Crate. Gordon, however, managed to make it to base contact with a Riddle. 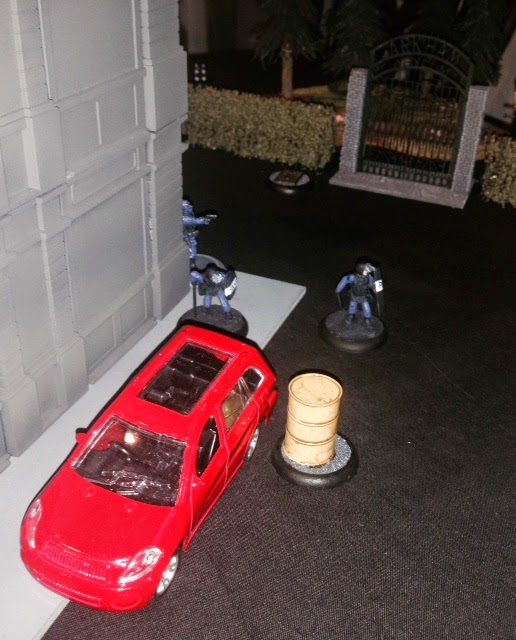 Rottor and Big Stikka continued to make heavy weather of walking up a street, but they at least managed to secure the Ammo Crate and Rottor got into a position to fire on the following turn. 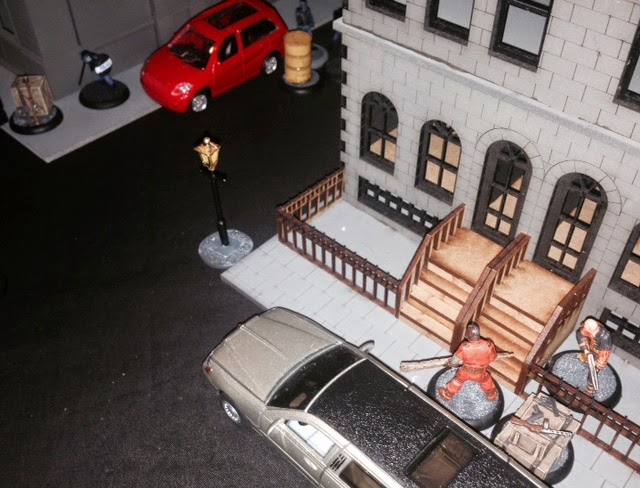 After another moment of inspiration from his boss, Mottom dropped of his Loot with Two-Face and launched himself into the Police lines, swinging his axe wildly and crippling Alpha. Matt's appalling luck continued as Gordon, Alpha and Bravo all fired at Mottom to no avail, his remarkable bulletproof vest turning aside all shots. 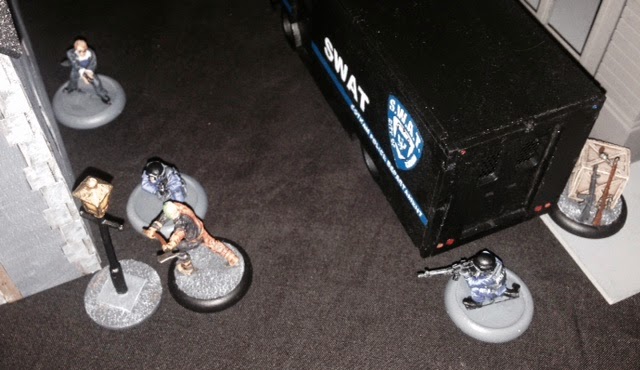 The police at least managed to grab their Titan Container and dose up, and Gordon completed two Riddles, but only broke even on VP's (more terrible dice from Matt).

Things went from bad to worse for the Police as I took the lead and Two-Face not only called his Attorney's Allegation but blazed away at Bravo, crippling him too, before moving over to behind the car. Bravo fired blindly at Mottom as he backed off to behind the SWAT van. 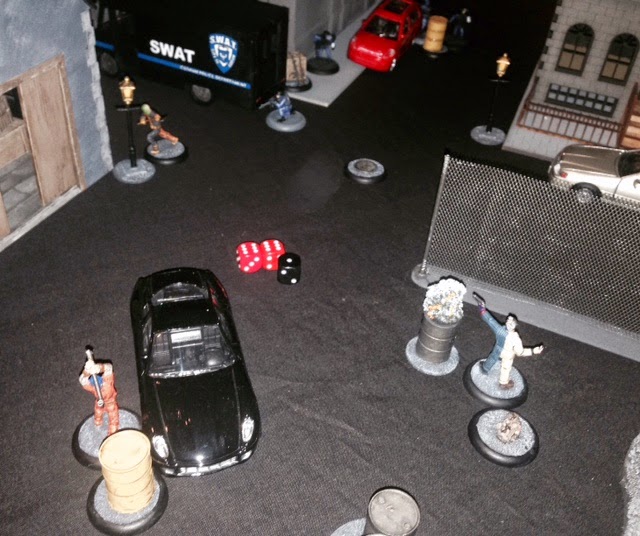 More shots bounced off Mottom's bulletproof vest to no avail, and he charged in to finish off Alpha with a flurry of blows. 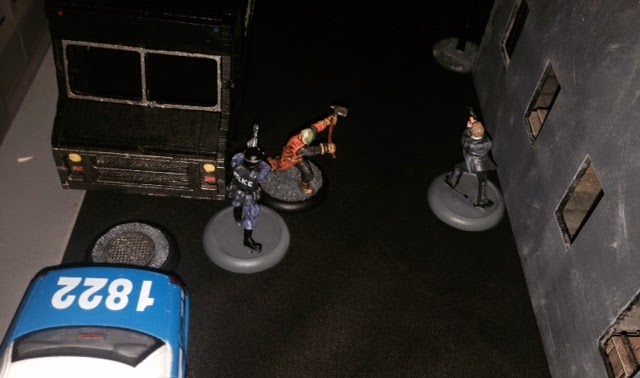 In a brief flurry of misfortune for me, Tube Prisoner rushed in to support Mottom, but found himself tasered and beaten to the ground in a shocking outbreak of Police brutality. Fortunately, he was down but not out. 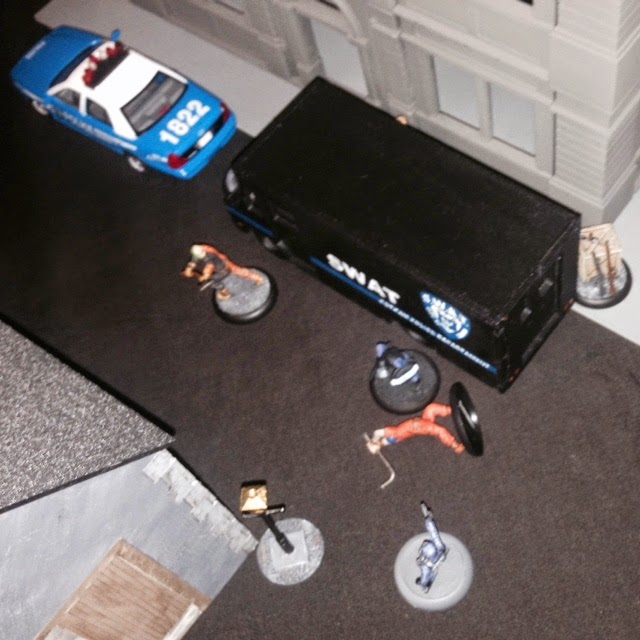 However, a poor movement roll prevented Big Stikka from joining the fray as he was forced to run directly towards a lamppost (at least he had some cover), whilst Rottor failed to hit anyone with his shotgun. 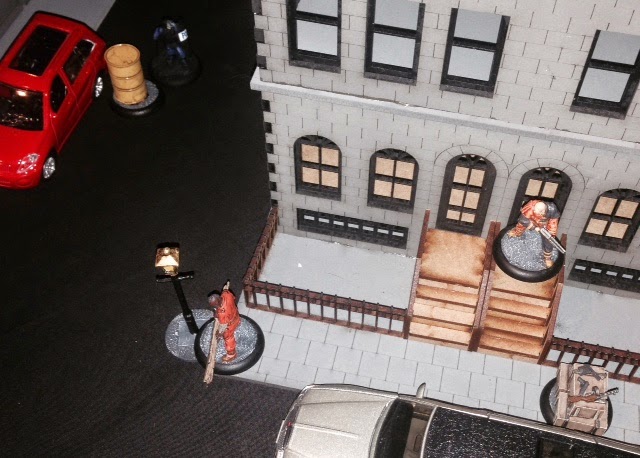 Despite losing Alpha, Matt had secured two objectives whilst I had abandoned mine to no real effect, which meant the gap was closing.

More shots failed to penetrate Mottom's vest, but O'Connell's stun gun finally hit home, However, Mottom hit back with a savage blow from his Axe. In an amazing display of bravado, Tube Prisoner stood up, stole the Male Cop's baton and ran for it back towards his boss, who had secured the Titan Container. Disarmed, Male Cop joined the assault on Mottom. 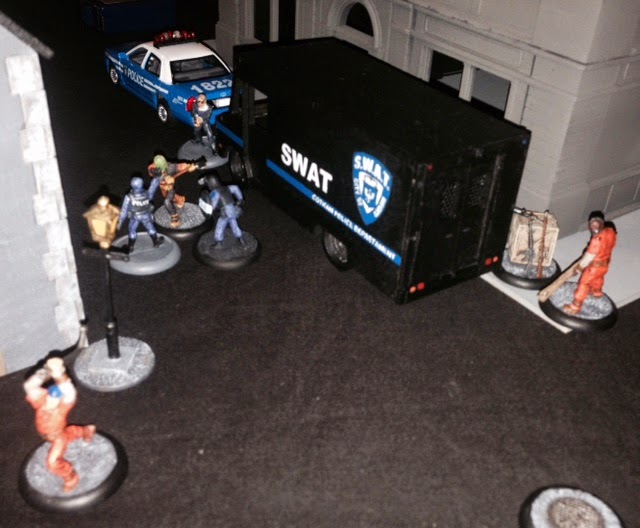 Big Stikka finally negotiated the lamppost and managed to take a swing at Bravo behind the Ammo Crate, knocking him out, whilst Female Cop looked on from behind a Titan Container.

For some reason I didn't get any pictures of this turn, but whilst Tube Prisoner and Rottor secured the Ammo Crate and Titan Container for more points, Two-Face gunned down Male Cop and advanced towards the fray.

The Female Cop still held the Titan Container, but the inability of Gordon and O'Connell to bring down Mottom was really costing Matt.

Gordon was finally able to put Mottom on his back, and despite a late assault by Two-Face that sen the Commissioner sprawling, nothing could stop O'Connell from slapping the cuffs on Mottom. 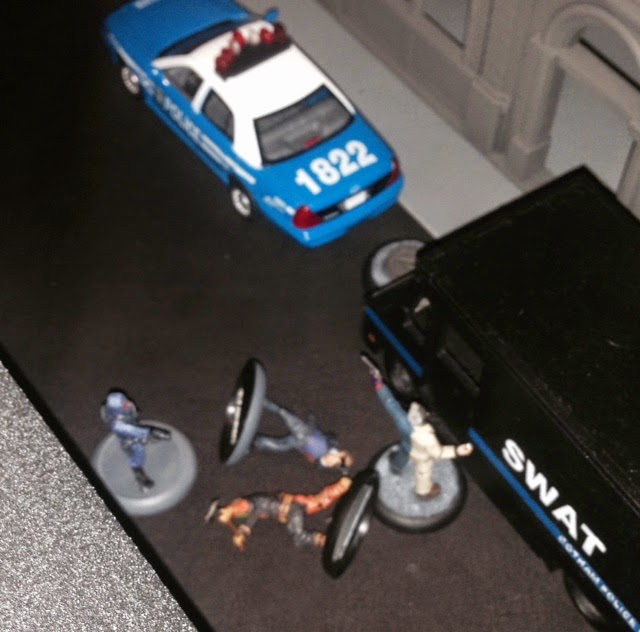 Bravo backed off from Big Stikka, abandoning the Ammo Crate, but the Female Cop came rushing in from behind an brained the big man, knocking him out. 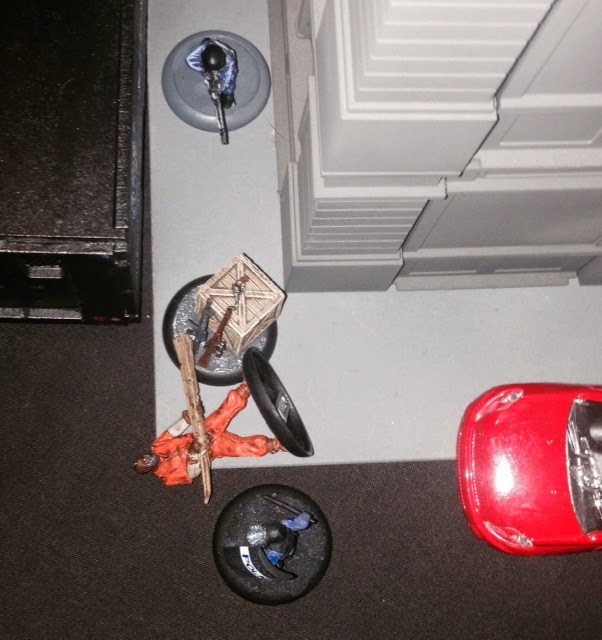 Despite this late flurry, I still had control of two objectives and so gained another scenario bonus. The game was over.

That game got off to an bad start for Matt and he was never able to get back level. He was severely limited by his inability to deal with Mottom, thanks to a seemingly under-priced bulletproof vest and the steady flow of objective VP's was difficult to match. If we played again, I imagine that Mottom might find a baton-wielding welcoming committee with armed support rather than the other way around.

Mottom was clearly MVP, but my favourite moment was Tube Prisoner cheekily stealing a Cop's baton and running off: I really want to do that with Ra's Al Ghul's sword or a Ninja's katana.

I really liked the constant ebb and flow of Action Counters in the Two-Face gang, and having a Henchman with 'Follow Me' is really useful. I'm not convinced by Shotguns, as a single dice roll goes wrong too easily. Both Shotguns in this game were fired numerous times to very little effect. Two-Face's Thompson, however, is filth!
Posted by Kieron at 11:59