Boots On The Ground

As the end of the month approaches I've managed to complete my second battlegroup for my Dropzone Commander Resistance force. 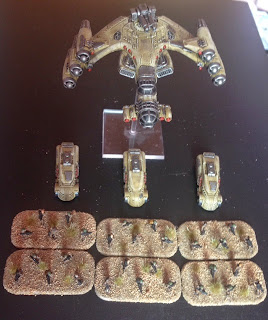 This battlegroup is, fairly obviously, a mobile infantry unit in the form of another Lifthawk Dropship and three squads of two bases of infantry, mounted in a Jackson APC. Apparently, infantry are key in Dropzone Commander, and I'm pleased to discover that although not packing awesome weaponry, these little guys are less likely to run away than most and the fact that they come in three squads makes them a bit more versatile than many of their opponents. 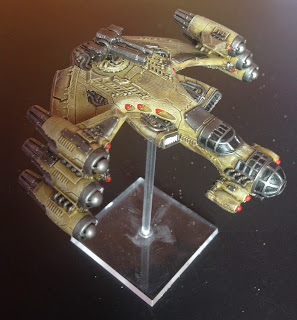 The Lifthawk Dropship is to all intents and purposes, with the slight exception of some of the details on the model, exactly the same as the last one. This one painted up really quickly as I was now following a pattern. It also comes with a handy AA gun mounted on its hull, although I suspect that given the need to move the infantry around the board, this will be used less for hunting enemy ships, and more for self-defence. 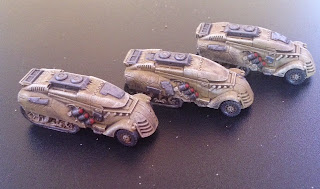 I showed off the Jacksons in my last post on this army. They haven't changed. 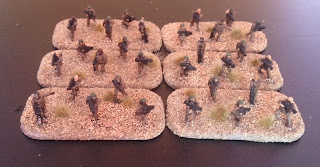 The infantry are the element that has held things up. I've enjoyed painting both 6mm and 15mm figures before, but it appears that 10mm is the unloved middle child of the three scales, having neither the easy-to-paint details of 15mm, nor the 'it's so small nobody will notice' factor of 6mm. So they're not my best work, but as long as I either distract or intercept anybody who is about to move their eyes within a foot of them, they'll do fine.

I've stuck with the dust, desert-wasteland theme and extended this to their bases with just a covering of sand and some grass tufts I had lying around.

I've now got only four models to complete before the end of the month: a Kraken Hovercraft and three Gun Wagons. I've made a good start on the Kraken, so I'm fairly confident of success.