As I may have mentioned, I've been lured into building an army for Dropzone Commander from Hawk Wargames. Not only have I been tempted to start a whole new army, I've also ended up buying the starter set for the most expensive of the five armies that are currently available: the all-resin-no-plastic Resistance.

Partly this was due to Pete, Wes and Mike already having started their UCM, PHR and Scourge armies and me not fancying the Shaltari (fortunately, Matt likes these), but mainly it was due to me having been given a fat pile of cash for my birthday and deciding to splurge on something pretty. So here's my first battle group of my army: a Lifthawk Dropship and two Hannibal Battle Tanks. 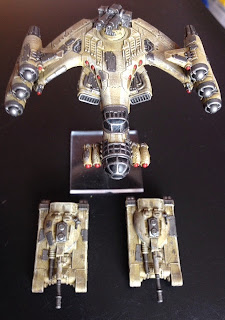 As the Resistance are apparently the remnants of humanity left behind on the 'Cradle Worlds' when the alien Scourge invaded over a century previous to the game, I figure that they might be hiding out away from useful places and so decided to paint mine in a desert theme. Unusually for me, these models feature washes AND highlighting, but they are so beautifully detailed that they're worth the extra effort. I'm particularly pleased with how the red details (actually they're missiles) really set off the colours. 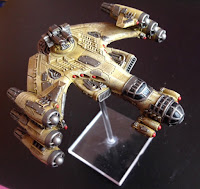 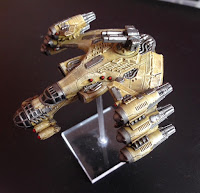 The game is built around battle groups of units that all activate at the same time. Most battle groups feature transports and either vehicles or infantry (or even infantry in vehicles). The Lifthawk is one of my three main transports. It's job is to deliver the tanks to the combat zone quickly and efficiently. From what I've seen of the game, unless I drop the tanks in completely the wrong place, the Lifthawk won't be collecting them again and so its chunky AA gun allows it to go hunting enemy transports - I was delighted to find out that the transports in the other starter sets don't have AA guns and so can't shoot back at my Lifthawks. Result! 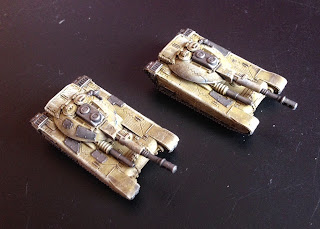 My Hannibal battle tanks are apparently something of a compromise. According to what I've read online (with all the caveats that brings), the Hannibals are either too lightly armoured or too short-ranged to go toe-to-toe with enemy heavy tanks, and too slow to function in another role. However, this is all theoretical until I actually play a game, and as it stands they've got the biggest guns in my current army and so will be indispensable. 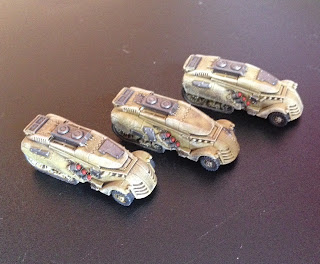 I've also begun work on my second battle group, which will feature a second Lifthawk, six stands of infantry and these three Jackson APCs for them to get around in. I was actually disappoints to find that two of these were the same model as each other, as across the rest of the army, ramshackle uniqueness is the order of the day - even if it's just in the positioning of the replacement armour plates as on the Hannibals. However, I intend to do some unit markings eventually, which should address the problem.

So that's my progress so far. Whether or not I get everything done by the end of the month remains to be seen, but they're coming along nicely.
Posted by Kieron at 09:54