Just a small update with my latest Batman miniature...the Riddler: 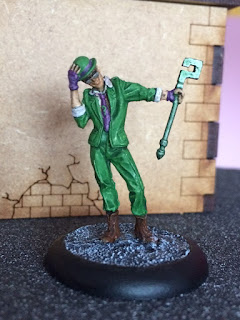 I never had a burning desire to own this model, despite it being quite nice, because I had already done one of the better Heroclix sculpts for the Riddler, and I didn't have any pressing desire to use him in a tournament game (for which you need official models).

However, two things changed this. Firstly, I got an Amazon voucher for my birthday and this was one of the cheaper models available there, allowing me to get two. Secondly, the new Flash and Arrow book contained rules for teams, one of which was the Suicide Squad, and the Riddler is a potential member. 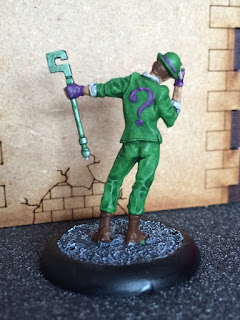 The model itself is really characterful, but, given it's such a simple model, I can't for the life of me understand why Knight Models sculpted it in three parts. Honestly, their sculpting decisions are a mystery at times...

...which, I suppose, is appropriate for the Riddler.
Posted by Kieron at 10:18