I’m sure I’m not alone in having projects that I keep coming back to, but just never get off the ground. For me, the most prominent of these is the War of 1812.

Despite appearances to the contrary on this blog, I am, deep down at heart, a historical wargamer. My passion for the hobby was sparked by my dad’s collections of Romans and Carthaginians, both sides at Flodden, ECW Scots and his Black Brunswickers as they appeared at Waterloo.

If you were to look at my gaming history closely, you’ll see the influences these roots. I always preferred the rank and flank of WFB to the ‘modern’ warfare of 40k. My collection of armies include my own Carthaginian and Hoplite armies. I once began an ECW project but it lost steam and the miniatures were added to my dad’s collection. And every so often I will begin furiously reading up on the War of 1812, pondering the gaming possibilities and impulse buying a few miniatures.

Why the War of 1812? What is it that draws me to this obscure and largely forgotten little conflict - an addendum to both the Napoleonic Wars and the War of Independence?

Mainly, the manageable scale (small, certainly compared to   Napoleon’s outings), the sheer variety of actions (small raids, ambushes, sieges, pitches battles), and the variety of combatants (British Redcoats, ragtag militia, and Indians!). Oh, and there’s a lack of cavalry - have I mentioned that I hate horses?

The trouble is, I never really got further than buying a few packs of miniatures from shows (and one rather random lot on eBay) because frankly, Napoleonic armies are quite intimidating. Most rulesets focus on the big battalions and even though the War of 1812 was small, the idea of painting even a couple of units of the same thing terrified me. Also there was the issue of who I’d play against.

What I needed was a combination of a few things:
The first point had been tricky. I have a copy of Muskets & Tomahawks, but that would need adapting. However, about a fortnight ago I stumbled on a Beasts of War video featuring Sharp Practice 2 from Too Fat Lardies. Not only did this look fun (focusing as it does on the exploits of individual commanders) and manageable (30-40 models per side initially), it also had a War of 1812 supplement to help with army building.

As for an opponent, I remembered that Matt has both an unpainted (well, apart from 8 Riflemen and a few Light Infantry) Napoleonic British army (which is frankly ideal as the 1812 models I have are American), he also has a penchant for trying to paint more than he buys - and so was open to the idea of working on them.

That left the Napoleonic urge. As you can probably tell, it’s back.

So, my first ever Napoleonic unit are a small group from the 1st US Rifle Regiment. 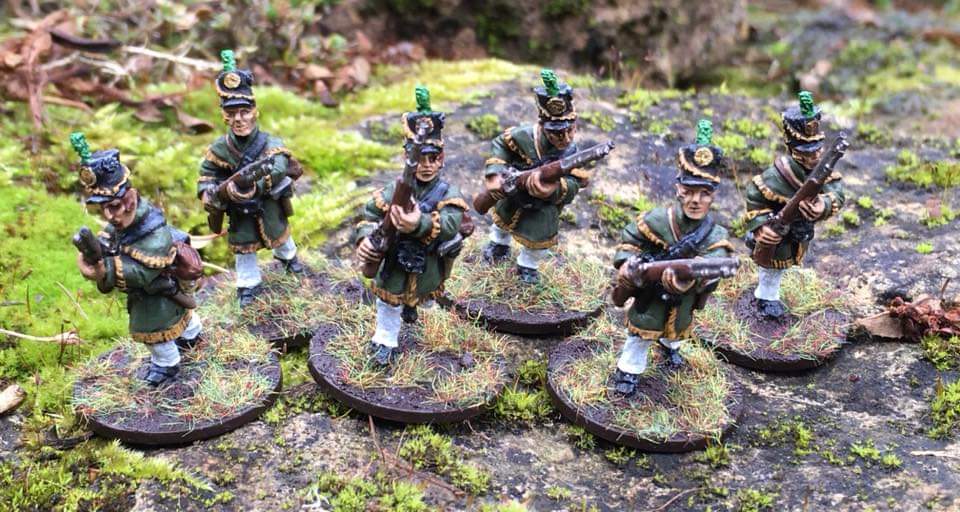 These models are from Knuckleduster miniatures, and although a little rough around the edges compared to what I’ve been painting in recent times, they’ve turned out okay. I’m always amused by Napoleonic uniforms - green coats with yellow fringe, over white trousers, topped off with a plumed stovepipe shako...and this is a fairly tame uniform! 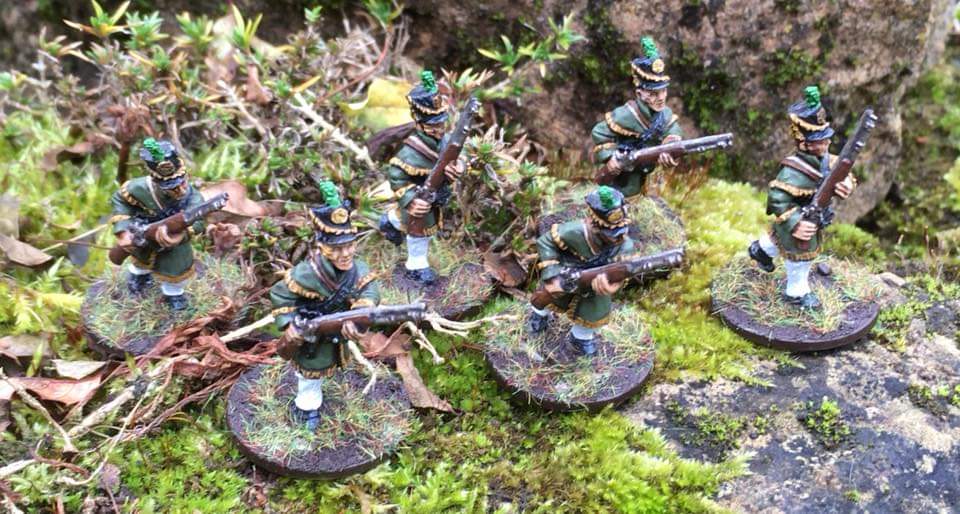 Sharp Practice requires troops to operate in groups of 6 or 8 (depending on their type) and join up with similar group to create formations like lines, columns and squares. Therefore these guys are a complete unit, although they’re currently missing an officer (or ‘big man’) to command them.

A quick scan of my ad hoc collection of War of 1812 miniatures pointed me to the ‘Scouting Force’ army list as being the closest fit. For this I will be building 6 Rifles (done), 6 Woodsmen, 16 Regulars, 8 Cavalry (I know...), and 4 Officers. Later on I have the makings of an artillery group too, and if I wish I can add the Woodland Indians I painted some time ago, although the Indians were more typically on the British side. 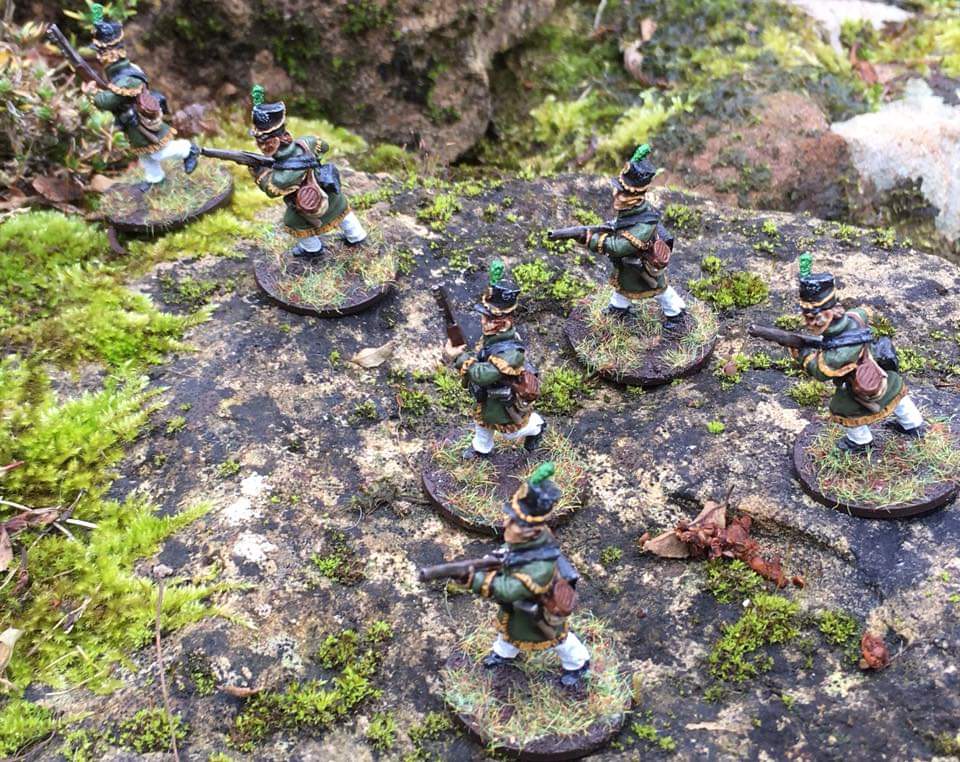 So there you have it. A new army started. I’m not sure how quickly they’ll come together, and I’m probably going to upset some Napoleonic purists along the way (my cavalry will be all kinds of wrong). However, I’m hoping Matt an I can at least take few models out for a spin in some skirmish rules before long as further motivation.
Posted by Kieron at 14:33