September is never a productive time for me. The return to work after the summer break really interrupts my painting flow.
However, come October, I shake my self out of it and get moving again...back in the saddle, as it were. 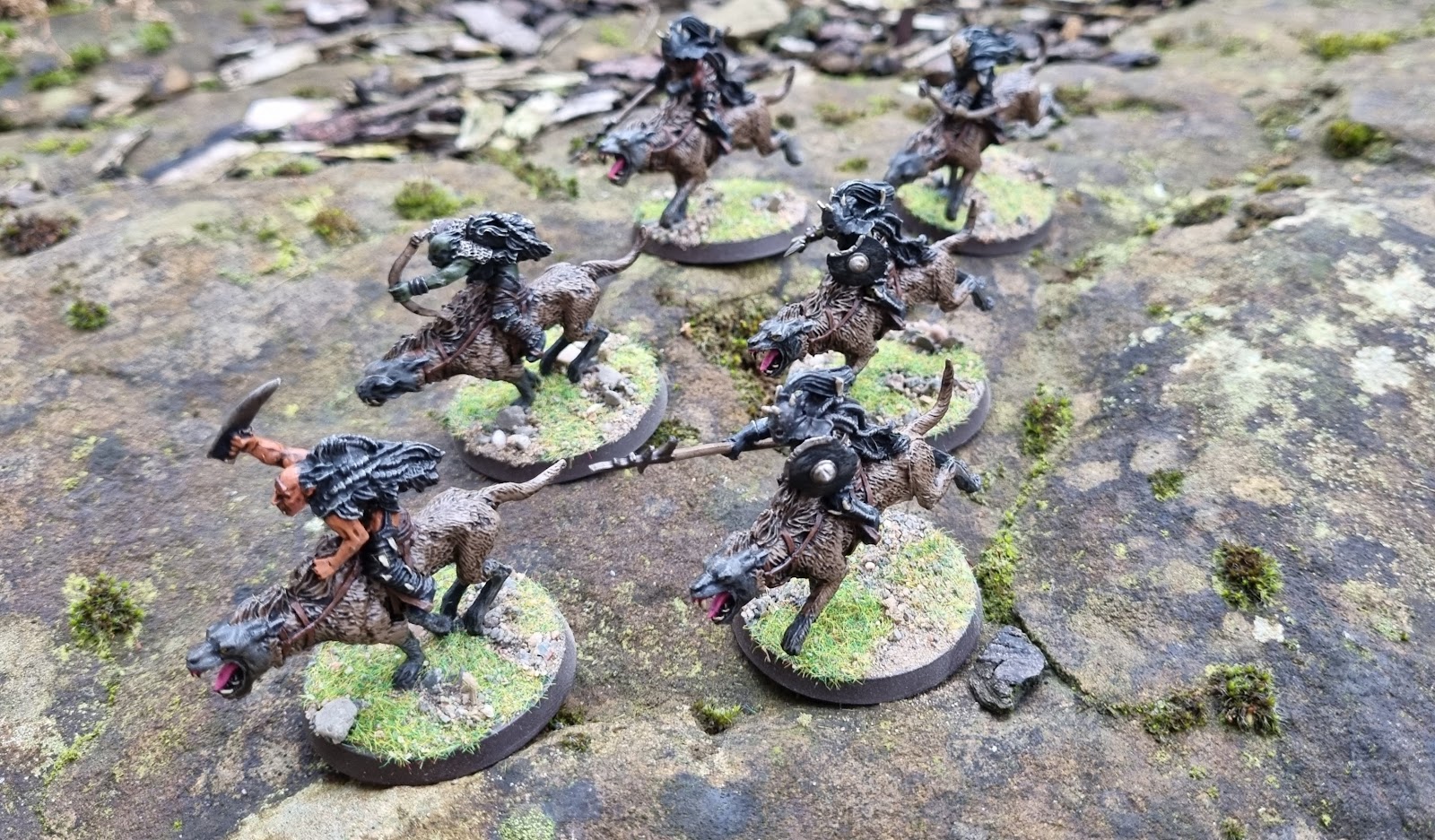 With the excellent Rings of Power* on TV, I suppose it was only natural that my focus would shift back to Middle Earth with these six metal Warg Riders I've had sitting in a box for a couple of years.
The Warg Riders are actually the major obstacle to me not making further progress in both the Quest of the Ringbearer and War in Rohan campaigns, so you can probably expect some more installments of those soon. 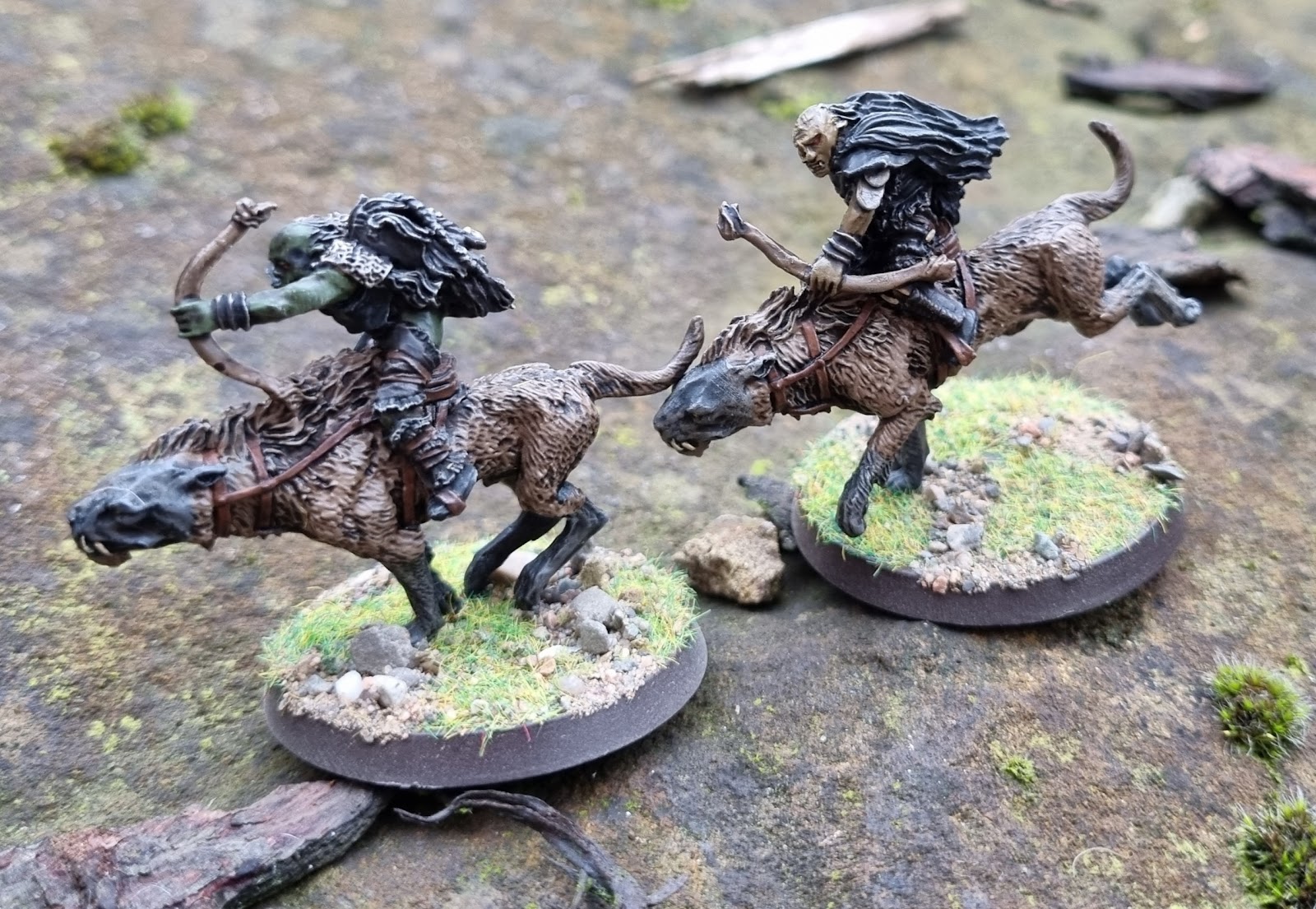 In terms of painting, I kept things quick and dirty, like I have with all my Orcs. A black undercoat with a variety of blacks, greys and browns given a Liberal dose of Agrax Earthshade and then a light drybrush.
I have again varied skin tones in keeping with the trilogy movies and I did put effort in to getting the Wargs to match the ones I repurposed from my undead army. 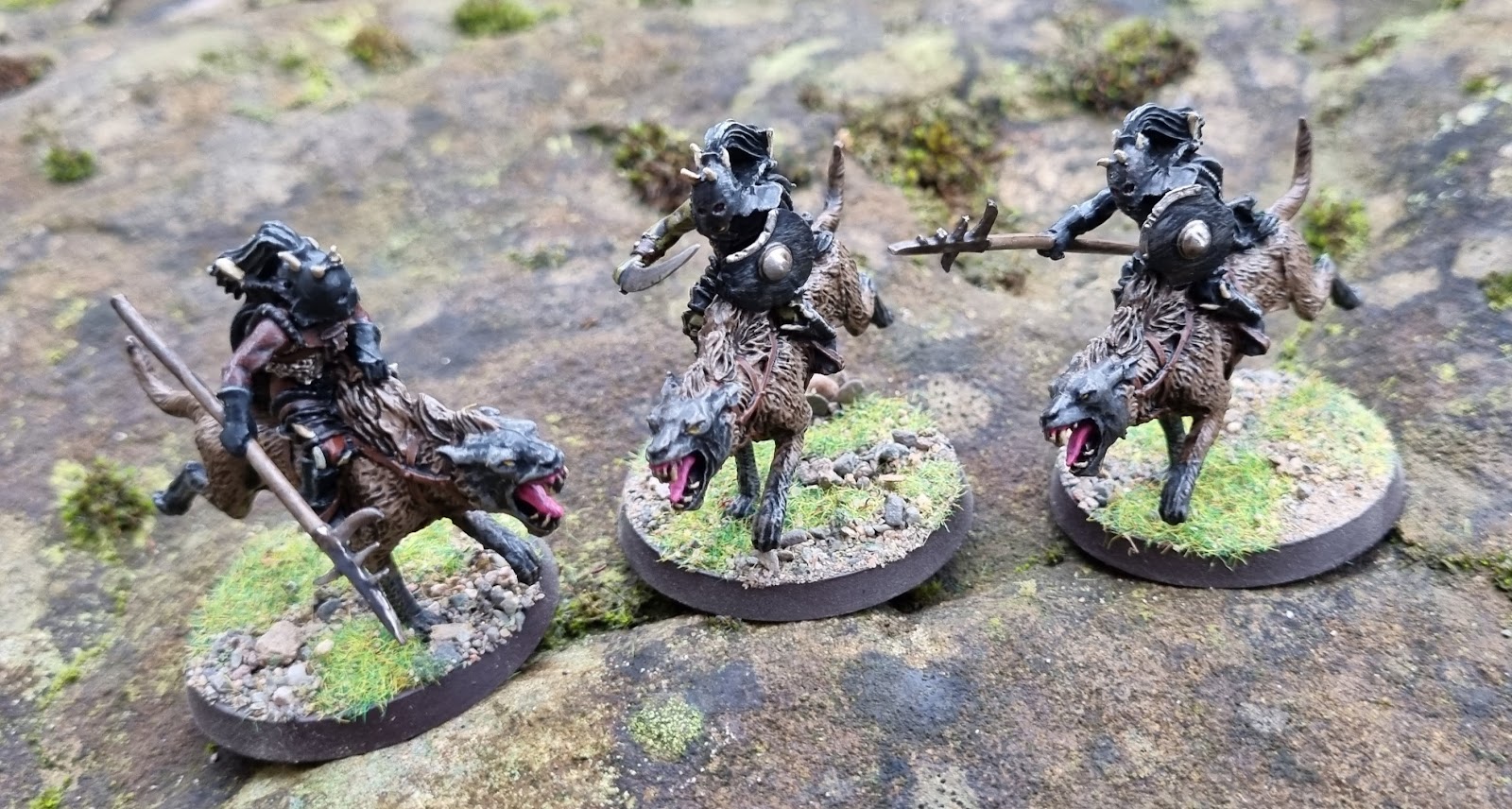 I did a little bit of customisation to add a touch of variation to the three identical spear-armed models. The arms were separate to allow for different positions and I added a couple of shields from the Oathmark Dwarf sprue and swapped a spear for a scimitar from the Oathmark Goblin sprue. 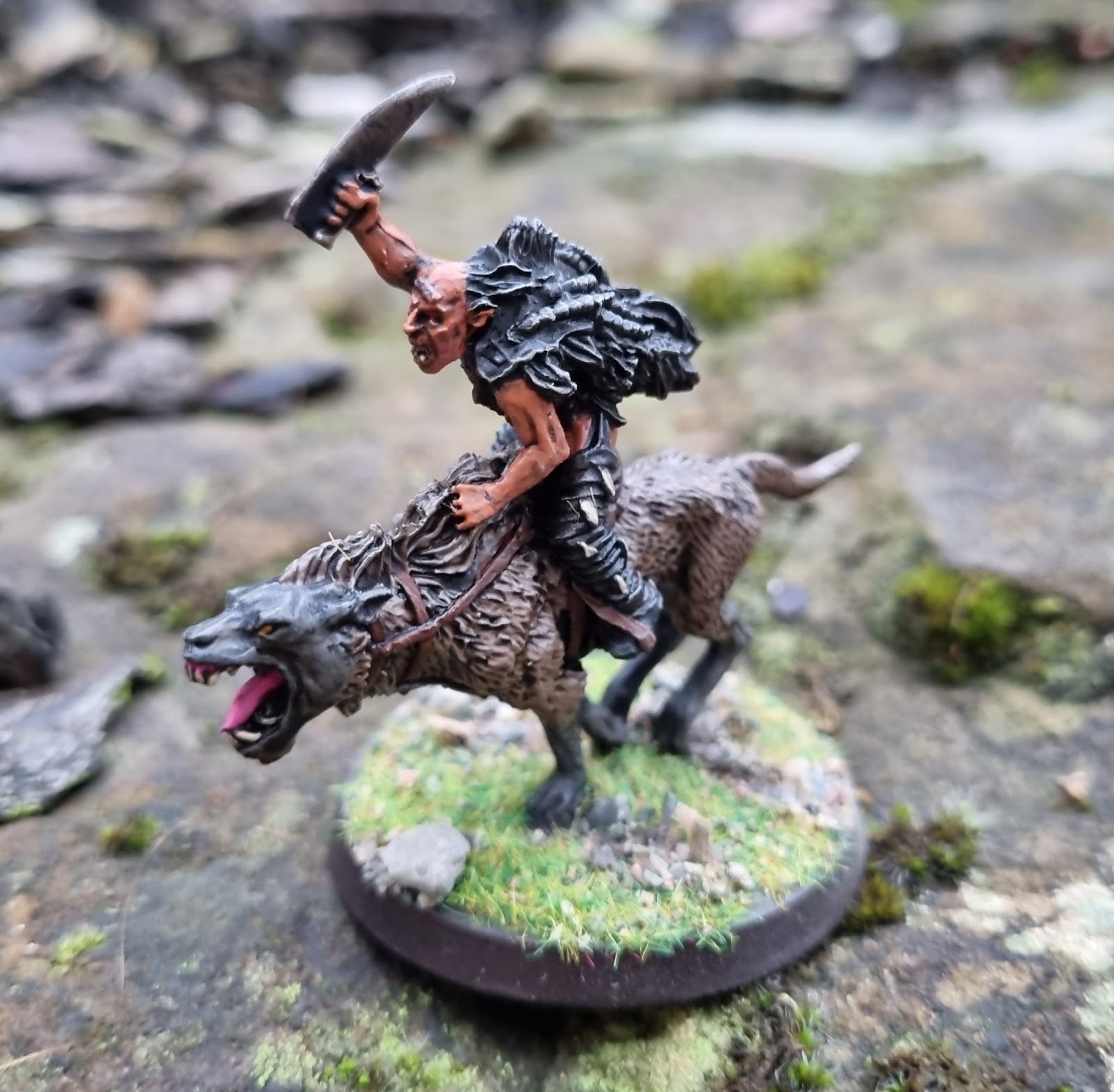 The final model of the six is actually a character. Sharku is the leader of the Warg attack on Theoden's column of refugees heading for Helm's Deep.
I've actually done his skin too dark and orange, so I may revisit him later. However, as he's a movie-only character and only in a single scenario, I may just leave it as he'll be a regular Orc most of the time. 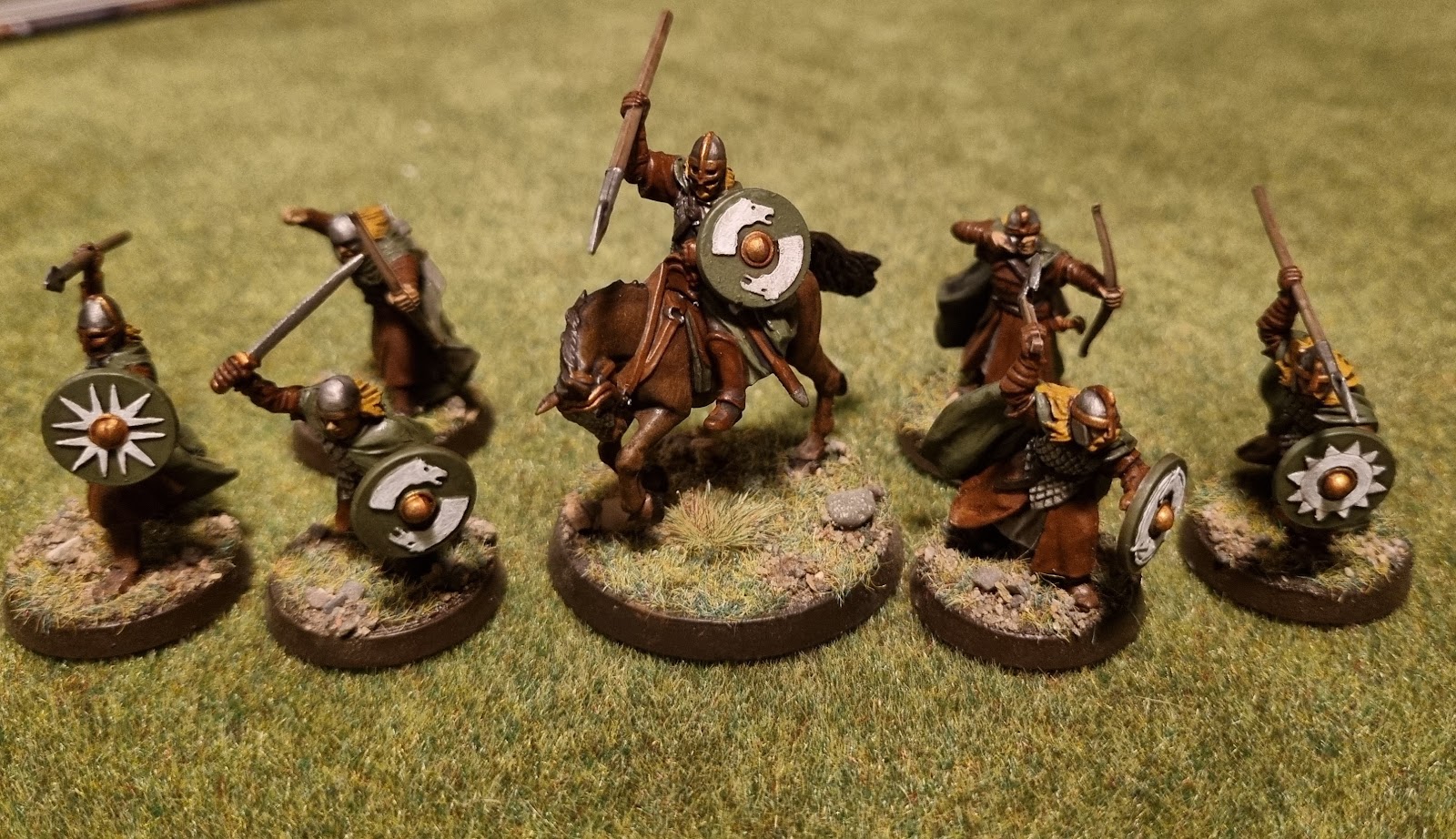 In other Middle Earth news, Pete, Matt and I restarted a Battle Compaines campaign with Pete donning the mantle of a Dwarf Lord, Matt revelling in his inner Goblin, and me captaining the horseless horselords of Rohan.
Across three games, we all experienced mixed fortunes. Pete managed to lose both his games and yet still get the best upgrades for his warband; Matt managed to get his leader killed (by me) but did overwhelm the Dwarfs; whilst I ran rings round the Goblins but came up short against some Orcs stood between me and the Dwarfs.
I did get a horse and an upgrade for my leader though, so I do now have a single rider of Rohan. 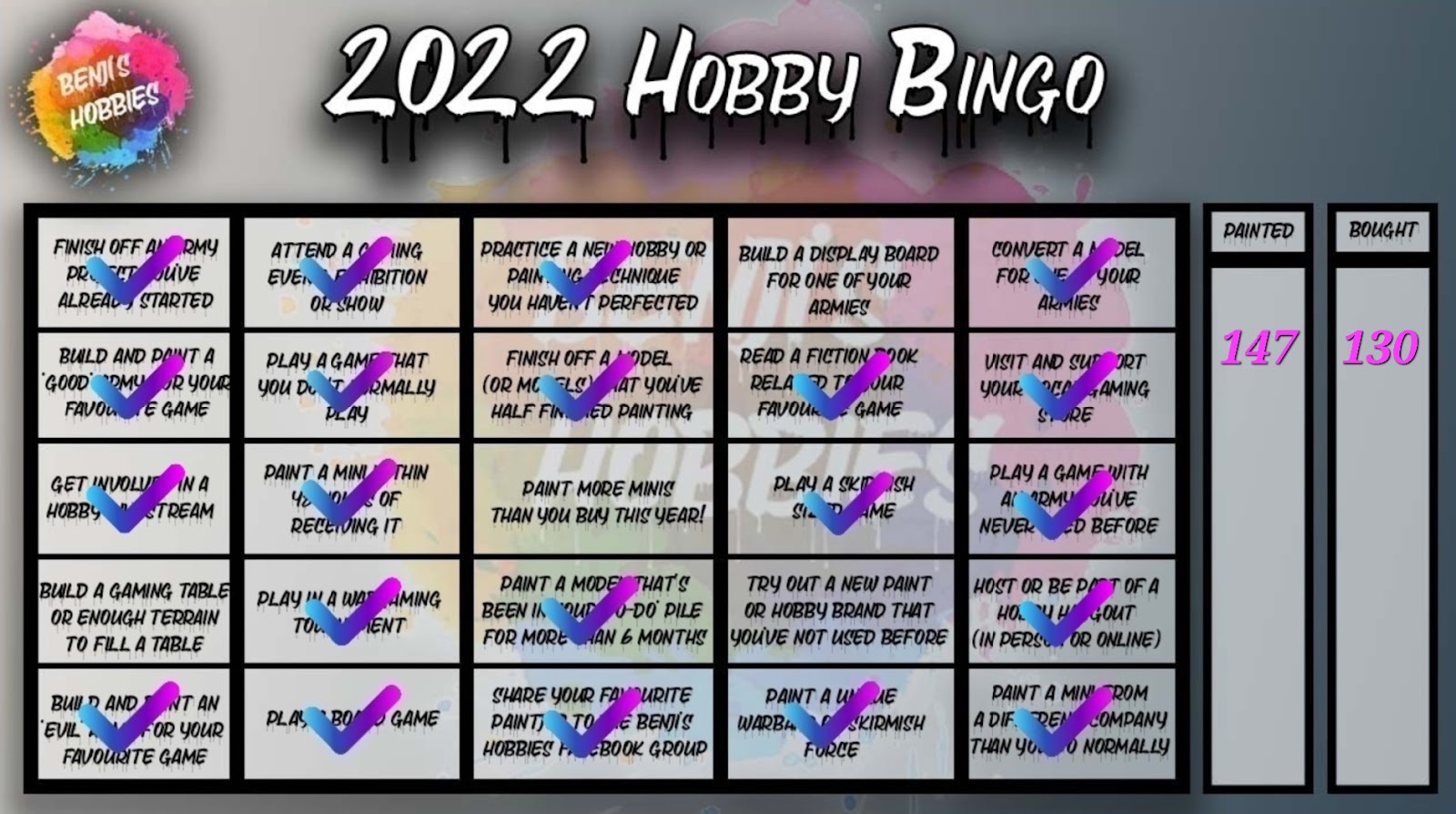 On top of this, although not Middle Earth related, my rpg group managed to assemble online for the first time in a long time and continue our WFRP campaign in the Border Princes.
This has allowed me to tick off one of the last five boxes on my Hobby Bingo card. Only four to go.
Acquired: 130
Painted: 147
* No, I don't want to hear why you don't like Rings of Power. I care not a jot.
Posted by Kieron at 14:01

Email ThisBlogThis!Share to TwitterShare to FacebookShare to Pinterest
Labels: Battle Compaines, Fantasy, LotR, Quest of the Ringbearer, War in Rohan