Reports are coming in from across the city that police lines have been breached and the infected are dispersing amongst the populace, spreading the contagion.
There are also tales, that this reporter fervently hopes aren't true, of small groups of survivors being cut off and battling for their lives against the tide of the infected... 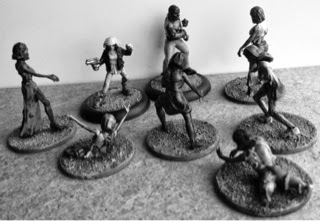 This week got off to a slow start due to work commitments, but I've managed to get my first two genuine survivors done. 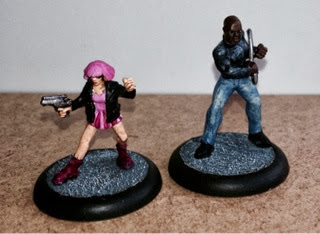 This crowbar-armed tough guy will be pulling double duty as a hard-as-nails survivor (who's done his research on the best weaponry for surviving the apocalypse) and as a henchman in my Batman project.
He's a heroclix model with a head swap from a GW sprue (Bretonnian Men-at-Arms I think) and he's turned out well. His suitability for both projects has also convinced me to use beveled bases for all of my survivors. Not only does it allow them to walk the streets of Gotham, but it also marks them out amongst the hordes of the undead and will prevent me forgetting about them mid-game. 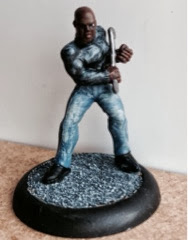 This one makes me chuckle. She's a repaint of a model I've owned for years (possibly from Grenadier?) and was in my Orlock Necromunda gang as a Juve.
Inspired by the pop-culture references popping up throughout Zomtober, along with the fuss about Miley Cyrus getting 'all grown up', I spotted the opportunity to paint her up as anothe child star gone off the rails. I call her Stephanie (you probably need to have kids to get the reference). 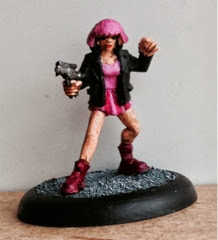 And now the zombies. I set out this week to finish off the sprue of Zombie Vixens and discovered that there aren't actually enough arms with open hands for all the models on the sprue. So things have gone a little stumpy. 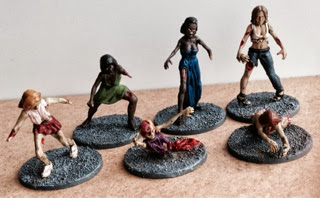 The one on the left below is probably my zombie-of-the-week. As to the one on the right, I'm not sure that I'm getting zombified black skin tones right yet, as the tricks I'm using for white skin (green was over skin, dry brush bone, wash pale brown) won't work. Any suggestions welcome. 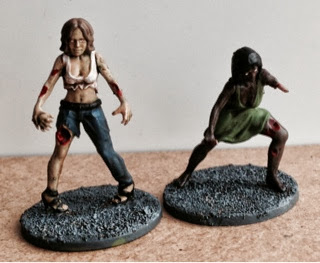 Does anybody else find themselves naming zombies as their painting them. Not all the time but occasionally I do. Below are Michelle and Claire. It appears that nobody is safe from the virus...oh, and somebody forgot to save the cheerleader... 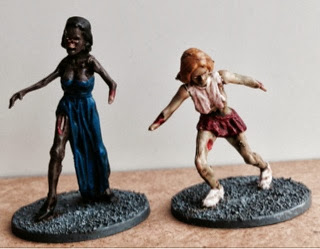 Finally, a couple of crawlers. I'm particularly happy with the one on the left. The spilled guts are from a GW zombie sprue and add a greater level of gruesome.

So that's week three. The horde continues to grow. 17 zombies so far. I'm not starting anothe sprue of Vixens yet, but I do have a few more of the frankly depressing male zombies to finish off the month. 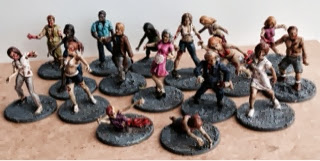