Far from the small isolated incidents at locations around the city: the hospital, the park and an inner city diner, reports are coming in of the living dead gathering into packs and hunting down unsuspecting citizens, thus adding to their numbers. 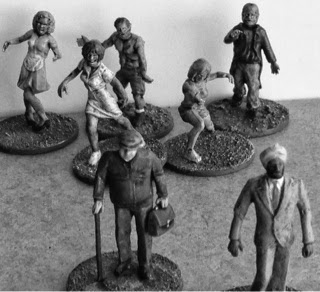 So the first deadline for Zomtober is here and I've exceeded my own expectations. I've done the three Zombie Vixens I planned for, quick and dirty paint jobs, but effective enough for my purposes. 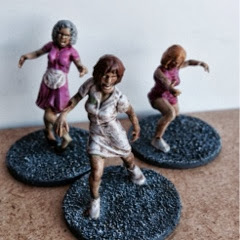 I've also completed a couple of Wargames Factory male zombies. I traded a handful of these for a sprue of the Vixens but I have to say, the quality is unbearably poor. I will paint up the eight miniatures I have, but I'm not sure I'm good enough with a brush to make them even look like something that was once human. 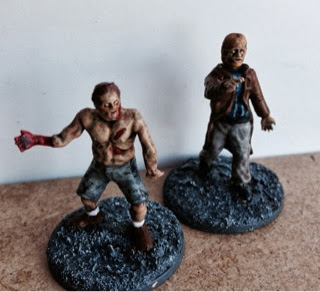 I'm fairly happy with my first batch. I probably need to be a bit braver with the blood and gore, and do a bit of research on how to get the right effect. Looking at the pictures, I'm disappointed with how I posed the jogger as you can't see the bone protruding from her stump, which is my most effective bit of gore.
I've also not done anything too fancy with the bases yet. I need to work or what I'm going to do. 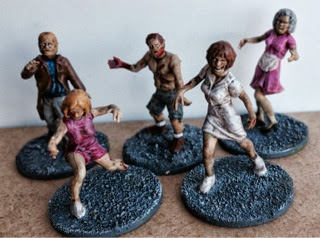 As a final note, you may have noticed the hapless civilians in the first shot. These are some O-Gauge railway models I picked up. 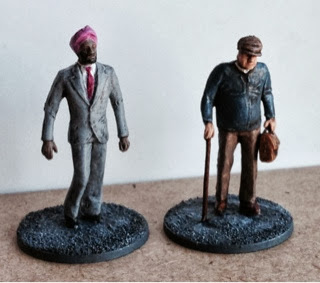 I've not done eyes yet, and I'm not sure I'm going to. One of the issues I've found this week is that I tend to paint with washes and dry brushing to pick out details, the Zombie Vixens respond fairly well to my style (although the waitress' face caused me headaches), but the details on the male Zombies and the Civilians is so shallow that I'm struggling.
Overall, nowhere near the best painting I've ever done, but they're not offensive to the eye and at this rate, I'll certainly have enough to begin an All Things Zombie campaign by the end of Zomtober, which is the goal.
Posted by Kieron at 02:41

Email ThisBlogThis!Share to TwitterShare to FacebookShare to Pinterest
Labels: Zombies