The Mayor has assured this reporter that the recent outbreak of violent behaviour in the Lower East Side is now firmly under control. Speaking at a lunchtime press conference the Mayor said, "After initially being caught by surprise by the scale and spread of the violence, the Police Department had deployed its Tactical Weapons Units to deal with the threat. You have my guarantee that this situation will not get any worse." 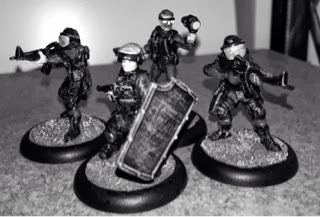 It's Police Week on Cheaphammer and my offering for Zomtober is a SWAT unit, deployed to combat the Zombies. The eagle-eyed amongst you will recognise that not only are these guys Heroclix sculpts, but that the chap with the torch is non other than Commissioner James Gordon. That's right, after a bit of a hiatus, my Gotham project is once again underway. 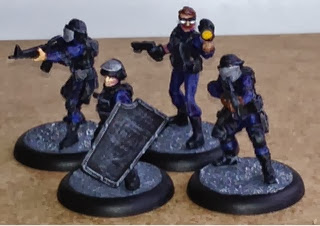 Gordon is massive. Given that the Batman models I'm using are 32mm, he looks eye to eye with them and simply towers over the WF Zombies. I like the model though, it has character and the body armour is more suitable for the combat nature of the Batman Miniatures Game. 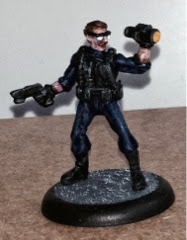 The other members of the team are a little smaller, but as they're crouching, it's not so noticeable. This chap required a bit of chopping to make him fit the equipment requirements of his stat card in BMG (and also to remove the simply HUGE sidearm he was holding). Hands and gun from my Bolt Action Russians and a Bretonnian shield and the transformation was complete. I did try to do some lettering on the shield, but it looked like a child's scrawl so I removed it. 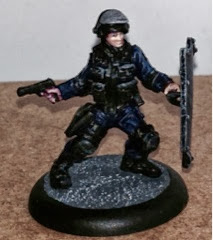 The other two members of the team are the same sculpt, something I don't usually like to use. However, given that firing an assault rifle is done in a pretty uniform way I was happy to use them and introduce a little more diversity to the department. 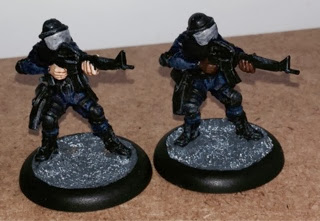 Continuing the Police Week theme, I've done a couple of the WF Zombies in police uniforms. The SWAT member had a head replacement from the WF Numidians, which although a little big is an improvement on the misshapen lump it replaced. There was a gap at the neck, but a splodge of liquid greenstuff turned it into a neck wound. 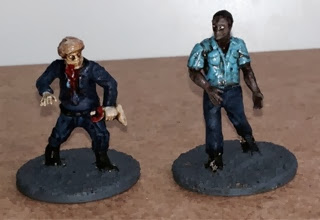 This guy. Well. I'm not happy with him, but he'll do as painting him is rather depressing. 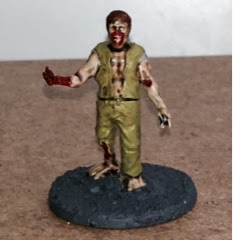 And some more Vixens. These are much more sayisfying to do. There are some mould lines visible, but I'm not too fussy about it, I'm not trying to win prizes. The lifeguard is an odd choice for a zombie in an urban environment, but WF clearly want you to make it so I decided not to fight it. The business woman is more ubiquitous and although you can't see it, I'm very happy with her mushed up face. The jogger (a second one, was there a marathon on when the apocalypse happened) is another one I like. 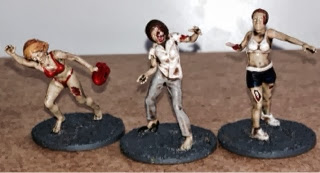 A really productive week overall, making progress on two projects, 10 models painted and some terrain work done (more on that soon). I'm very close to being able to start playing some zombie games, however I'll need some survivors first...
Posted by Kieron at 03:04