Building for the Future

A bit of a slow week for me. I e not actually managed to get any painting done. However, that doesn't mean that progress hasn't been made. 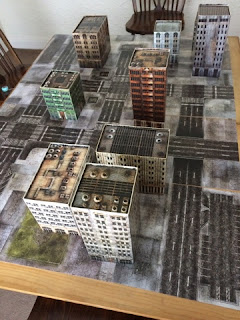 This is my new card Dropzone Commander Ruinscape terrain that I managed to grab for a tenner in my FLGS, Wargames Emporium. The reason I got it so cheap (RRP £30) is that it was second hand and incomplete. I've only got 15 tiles of 24, and 9 buildings of 20.

Although this leaves me unable to do a 4'x4' board as the rules recommend (nothing that a colour photocopier won't fix), my table is 3'x4' which will be plenty big enough whilst my forces grow. Also, I currently have no small buildings, but again, this is eniminently fixable given that. Hawk Wargames offer their building for free download. 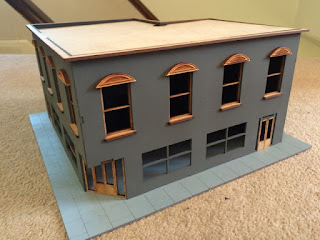 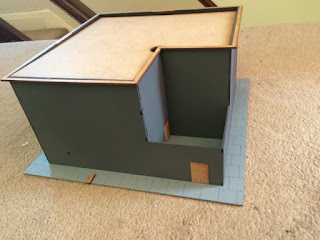 This is partially finished Public House from Timeline Miniatures that I bought at Triples just over a year ago.

It has lots of nice details and features including internal walls, fittings in the barroom and a removable upper floor. 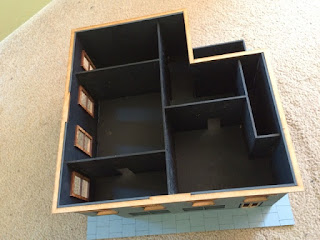 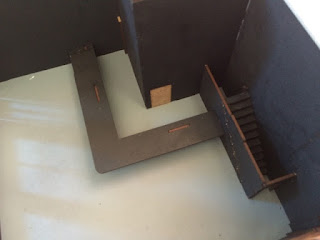 My only gripe would be that the fitting points are so snug that once I'd sprayed the parts, they upper floor didn't go together as evenly as it should and so took a bit of trimming to make it slide in neatly. Also, the instructions are a little vague and I got one of the supports for the upper floor in the wrong place and had to improvise another from a soar bit of MDF.

In addition, I've also put together a couple of Sarissa kits that I got for my birthday this year. 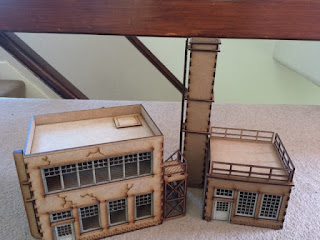 Sarissa are, in my opinion, amongst the best MDF kits around and this workshop/office and pump house are no exception, requiring very little glue to hold them together.

I was a little surprised that the pump house doesn't have a removable roof like most of their buildings, but given that it's so small, I can't se that being a major problem.

The workshop has a removable roof and upper floor and a really nice access stairway. It's worth noting that the detailing on the steps did cause a bit of a problem as the corners on some snapped off when taking them off the sprue and thus required me to trim the rest to a similar shape. However, this may be because I let my daughter do this bit... :) 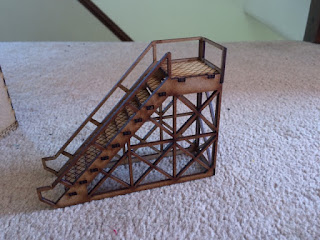 All in all, things are moving on quite well. I'm aware this month hasn't been as productive as others, but I knew that would be that case and that was the reason I took the pressure off myself in terms of deadlines.
Posted by Kieron at 01:41