After the marathon that was the last article on the duplicate characters in the Batman Crew, it's time for for a slightly less taxing look at the Joker Crew. I say less taxing, because although the game features four different Joker models and three different versions of Harley Quinn, I've covered most of this ground before in previous articles and so much of this is summarising what I've previously discussed.

Let's begin with the Clown Prince of Crime...

The single most moaned about model in the game. This version of the Joker, doesn't just not play by the rules, he ignores most of the book. Total Vision and Remote Control mean that his Exploding Teeth ignore line of sight and cover; his One Shot Gun has a chance of removing anybody in the game and doesn't even need to roll to hit; and Kaos Agent means that the Joker player doesn't really need to plan ahead and his opponent will have less chance to take the lead. AC Joker is dangerous all the time, and his Poisoned Knife means that he's just as lethal close up as from range. Using this version of the Joker will pretty much immediately put your opponent on the back foot from the start of the game, forcing them to react rather than act. As he comes with the crew starter pack, he is by far the most popular and common Joker. 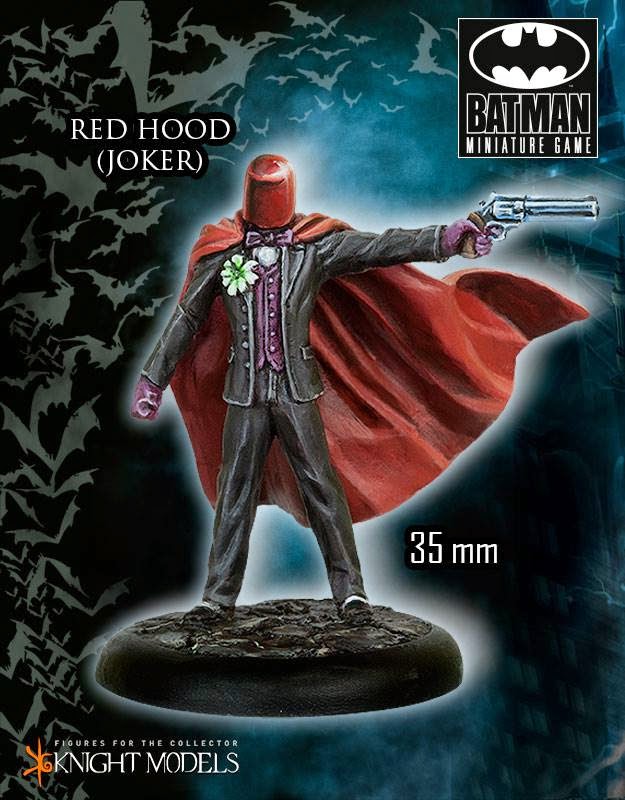 A limited edition sculpt that came with pre-orders of the limited edition Joker rulebook, this model actually uses the same rules as AC Joker. Unless you already own him, his limited edition nature is likely to have an inflationary effect on his cost to acquire. One for the collectors.

The cheapest Joker in terms of Reputation, this model is based (not surprisingly) on Heath Ledger's take on the Master of Mirth in 'The Dark Knight'. This is a more direct (some might say 'friendlier') version of the character, who still has Kaos Agent, but loses the One Shot Gun and the shooting round corners, and replaces them with Undercover, for deployment fun, a fearsome Custom Gun and the amusing Henchman Bomb, which allows you to detonate one of your own models. The need for line of sight, rolls to hit and expendable Henchmen makes this the Joker for you if you want to test yourself a bit more, free up a few points in your crew, or simply stop your opponent whining.

Fed up of your opponent moaning about Kaos Agent? Want to get more 'hands-on' in games? Need a huge lump of metal in your life? This is the Joker for you. Titan Joker is, funnily enough, Joker dosed up on Titan, as seen in the Arkham Asylum game. Fast (Large and Tireless), tough (Endurance 10 and Sturdy) and downright scary in combat (Attack 5, Charge, Claws, Power Strike), this is the Joker to ram down your opponent's throat and tear it out from the inside before they can say, "Joker's broken!" As with all the large models, Titan Joker is vulnerable to missile fire and bad dice in attack, but he's a blunt instrument, designed for aggressive play. If you're only collecting this crew, Titan Joker allows you to dramatically alter your style of play for a change.

This incarnation of the Joker's main squeeze is largely a support piece, designed to support the crew's Henchmen. Although she can handle herself in a fight, AC Harley's traits suggest that she should be moving early in the turn setting things up for the Henchmen to capitalise on. Disarray allows her to mess with the opponent's plans, Follow Me provides additional mobility to the crew and Technique allows her to knock an opponent down for others to finish off. Acrobat provides her mobility and defence, but this is the Harley for you if you want to support a swarm of clowns.

Classic Harley is as she appeared in 'Batman: The Animated Series', and she's much more of an individualist than AC Harley. She's faster (Acrobat and Fast), tougher (Endurance 7) and capable of taking on individuals (Distract) or groups (360 degree attack) and pushing them about, she seems designed for opperating away from the crowd. What's more, this is the only version of the character that can be taken in a Poison Ivy crew as a Free Agent, and in fact, her Discourage trait is devastating when used in conjunction with Ivy's Control Pheromones. Get Classic Harley if you want a more elite crew which needs less support allowing her to go it alone, or want the option of using Harley Quinn with Poison Ivy.

The new girl on the block, and I have to admit that I have neither used her, nor seen her used yet, but the big difference here is that she is a Leader, rather than a Sidekick, and as such, comes in her own starter pack. This has a number of implications, most notably that you won't be including Joker in your crew. What's more, because you can't include duplicate characters, and Joker's Daughter won't work with Harley, your options are reduced in that the only Sidekick you are able to include is Mr Hammer. AK Harley is probably the best of the three in close combat, with Handy, Unpredictable, Mobster and Escape Artist making her good on both offence and defence. Giving the Bluff trait to her crew, also has the potential to mess up the opponent's plans. This is the Harley Quinn for those who want a Harley crew rather than a Joker crew - which to be honest, is a pretty good representation of the character in the Arkham Knight game.

Again, I'm hoping that these articles will prove useful to new players trying to work out which version of a character they want to by. Next time, I'll be tackling the League of Shadows.
Posted by Kieron at 09:15