In my effort to clear the 'bat-log', I've begun to get back into the Bat habit with the last few of the Heroclix models that I intend to use. Mainly, these are for models that haven't been and/or are unlikely to be made.

First up, as hinted at in the title, Spoiler... 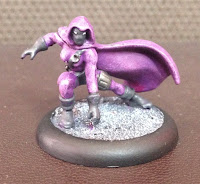 Spoiler, aka Stephanie Brown, aka Robin (the fourth one), aka Batgirl (the fifth one), Spoiler is a key character from one of my favourite story arcs: War Games. In typical, comic book (not at all sexist) fashion, she is not up to the job of Robin, accidentally starts a gang war, hands control of the underworld to Black Mask, is tortured and is allowed to die to prove a point to Batman.

In game terms, I'll be using her with Batgirl's profile, as she later became Batgirl, after she was revealed to have not actually been dead (this happens a lot in comics). 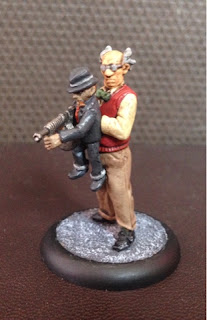 Scarface is a Gotham gang boss, who's actually a ventriloquist's puppet controlled by mild-mannered, and somewhat bonkers, Albert Wesker.

For me, the Ventriloquist is one of the most notable absences from the current range, being a long term fixture in Gotham's rogues gallery. For the game, I'll be using the profile of Commissioner Loeb as part of the Organised Crime crew. It's not a perfect fit, but it works well enough. 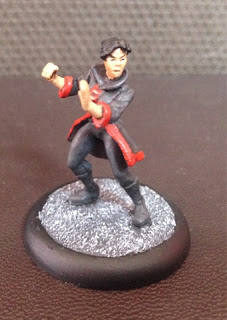 One of the most dangerous members of the League of Shadows, Lady Shiva is an elusive assassin who has both opposed and aided Batman at different times.

This is my least favourite of the three models I've done this week. A problem which is enhanced by the knowledge that Knigjt Models have actually release a rather lovely sculpt of Lady Shiva as she appears in Arkham Origins. 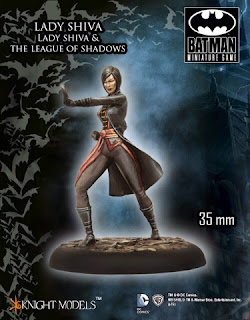 However, the official Lady Shiva comes in a pack with three other female ninjas and as such, they're not high on my shopping list as none of them are armed with ranged weapons, and that's what my League is currently missing. So, for now, she'll do.

In other news, I've also done a little terrain...

These park benches are a cheap little addition from Warbases. They should add an extra feature to my game board.