As a brief interlude from all things Batman, we've recently bought in to Frostgrave, the new fantasy skirmish game from Osprey Games and North Star Figures. The premise of this game is that an ancient city trapped within a magical ice age has begun to thaw out and wizards and their retinues have descended upon the ruins to gather as much treasure and magical lore as they can...and fighting ensues.

Being a small game with a maximum of ten models per side, this game seems an ideal opportunity to purchase a small group of models and paint them up; indeed, North Star have released metal wizards and a box of multi part plastic retainers for just this purpose.

However, me being me, I decided to simply raid my existing models to see what I could put together. Fortunately, the Bretonnian army that I began this blog with features not only a wizard, but a Grail Reliquae unit I cobbled together from assorted human models armed with assorted weapons. This makes them perfect for Frostgrave, as the different types of retainer are largely distinguished by how they are armed. This has allowed me to assemble a pretty thematic warband. 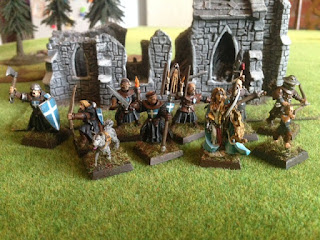 However, there were a couple of types of retainer that I either didn't have, or didn't have enough if, and so a forage in the bits box was in order.

For a thief, one of the lowest value models in the game, I've used a spare Celt child from Warlord Games. I'd used the others in the pack on my Saga objectives. The remaining model is not only running, making it eminently suitable for the fast moving, lightly armed thief, but is also barefoot, perhaps identifying him as a halfling instead. Currently, Frostgrave has no non-human races, but there's nothing to stop you using dwarfs, elves, orcs and other models which you might have lying around unused because a multi-national company has just callously destroyed the game you built those armies for and replaced it with something as tactically appealing as being hit in the face with a large fish... 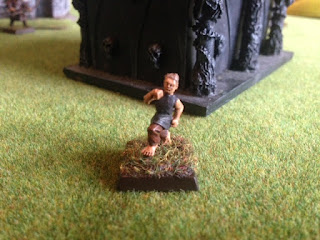 Additionally, I only had one bowman modelled in the unit, and so I decided to add another. This is a Lord of the Rings Ranger of Ithilien. I've been really quick and dirty with this model, so I may go back and add some details. The bow is also a bit chewed up and so may get replaced with a new one. 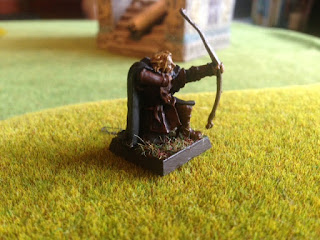 Finally, Warbands can be accompanied by warhounds, and as it happened I had a Copplestone Castings husky team I'd picked up cheaply knocking about that I'd originally intended to use as Mine Dogs in Bolt Action. However, since I was bought the official models from Warlord, and discovered that they're not that good anyway, one of them has found his way to Frostgrave. In fact, I've given out others to Matt, Pete and Wes for the same purpose, and I've still got another four left. 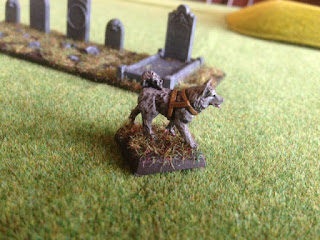 Frostgrave needs lots of terrain, and so I decided to add to my meagre collection by putting together a small graveyard from the remaining gravestones I had lying about from my undead army. Most of these are from the Renedra Gravestone sprue, which is one of the best value items I've ever bought as I used it to spread out my skeletons massively, adding something in the region of twenty to thirty models to my army. You may also notice that the two smaller headstones are from Games Workshop sprues (the skulls give them away). A cheap and simple terrain piece that will be easy to add to. 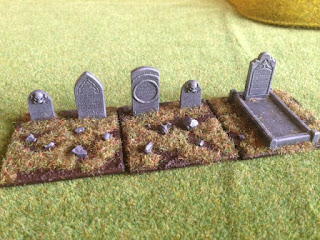 Frostgrave also requires treasure tokens which required another trip to the bits box. I've based most of these on the new moulded scenic bases which Knight Models have started to use in their Batman miniatures. Despite being sceptical, these have actually painted up quite well. 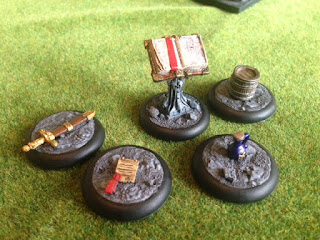 And so, beyond the inexpensive rulebook, I've spent literally nothing on this game. As you can see from the table below, we probably need to add a bit more terrain to break up lines of sight, but both Matt and Pete have trees, walls and ruins they can add, so we should be fine in the long run. Currently, the table leans more heavily on the 'Grave' than the 'Frost', but there's actually nothing specifically snow-based in the rules, so it's not a problem. 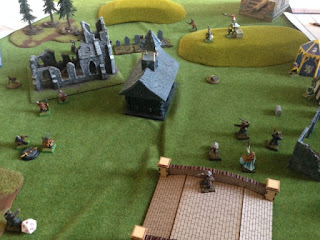 The game itself is fast and simple, with dire consequences for bad dice rolls at the wrong moment. Which caused problems for me and the curse I'm currently living under of pretty much always rolling a one when it matters. From the first dice roll of the game last night to determine table edge, I couldn't really get much done with my wizard thanks to low rolling. 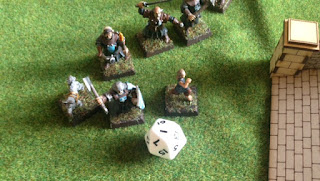 This has led me to my first major observation of the game, in that it's not one to put too much strategic thinking or planning into, as a single dice roll can pretty much ruin your day. As it did for me on turn one, when a Grenade spell from Pete almost killed my Apprentice, who then killed himself trying to cast a Heal spell by rolling a one.

Another observation comes from the campaign system. There are additional experience points available to the Wizard for killing enemy models. However, for this game, I'd set my Wizard up as a Thaumaturgist, and didn't have any direct damage spells. Although this wasn't a campaign game, I will probably have to remedy this, or face falling behind in the campaign from the get go.

The body count in out three way game was high. Pete and I both managed to secure one treasure token each, and Matt managed to get three off the board - he won the table edge selection roll, which may have had an effect. Matt and I lost our Apprentices early on (mine was blown up, Matt's was mobbed by my retainers), but Pete managed to lose both of his spellcasters in fairly short order afterwards; his wizard was blasted by Matt's Elementalist and his Apprentice was killed in combat with my Knight, despite having a numbers advantage, which led to observation number three - the d20 and the damage mechanic mean that no combat is a sure thing and anybody can die in one hit. I'd suspect that in campaign games, we'll need a little bit more caution to keep characters alive.

By the end of the game, I had just my Wizard left, Matt had his Wizard and one Archer and Pete has a single Crossbowman. My attempt to use Mind Control to get Matt's Archer to shoot his Wizard in the back of the head failed (as did most of my plans during the game), and my Wizard was fried by Matt's now trademark Elemental Bolt. A good shot from Pete's Crossbowman took out Matt's Archer, leaving a shoot out between Matt and Pete for control of the board, with the first one to land a telling blow certain to win. 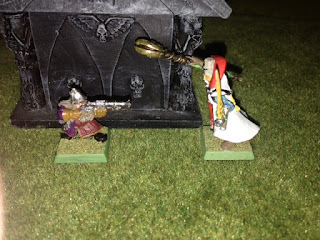 Matt's ability to act first with his Wizard gave him the edge and he struck the Crossbowman down to win the game.

Frostgrave is a fun game and easy to put together a warband for from existing collections, and we're going to run a small campaign in the coming weeks. My Wizard is likely to get a refit of her spells before we start, but this is not a game I'm ever going to put too much thought into, as the dice dice mechanic is so 'swingy' that you genuinely can't guarantee anything.

It's a quick, fun, casual game that looks like it should be diverting for a while.
Posted by Kieron at 01:01