Callooh Callay, What A Frabjous Day!

Continuing my purple patch of painting, here's another new crew for the Batman Miniature Game: The Wonderland Gang! 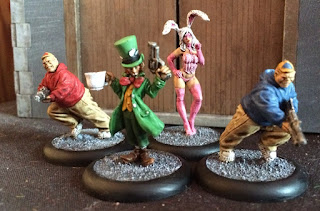 This gang hold a special place in my heart for a couple of reasons. Firstly, I played a role in lobbying for KM to make them and I like to flatter myself that I actually gave them the idea. Secondly, and more importantly, the concept of this gang is utterly bonkers. A bunch of 'Alice in Wonderland' themed villains (of which there are more than you'd expect in Gotham) banding together to commit crimes inspired by the works of Lewis Carroll.

The models in the gang are delightfully cartoony, without a lot of the fiddly military equipment that sometimes clutters other models in the range. This made them a joy to paint, and I managed to get them all done in a single morning. 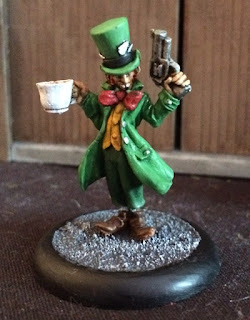 The Mad Hatter, is mad, and uses hats to mind control his victims. At times he's presented as having an unhealthy obsessions with small blonde girls called Alice, and at others he's just one of those harmless villains who commit themed crimes.

This model has a touch of the leprechaun about it and the paint scheme reflects this. I really like the characterful face and ridiculously sized hat and cup. 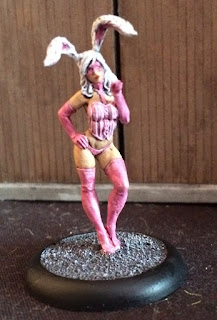 White Rabbit, despite the Lewis Carroll associations, is not actually a canonical member of the Wonderland Gang, and is actually an ally of Bane, as such she can work for both gangs as a free agent.

With the more objectified female sculpts in the range, I usually try to do something with them to make them less damaging to my reputation should somebody see me using small models of scantily clad nubile young women. Essentially I try to cover up some of the unnecessarily exposed flesh (see Poison Ivy and Huntress for examples of this) and dress them in something more practical. However, as White Rabbit has essentially decided to turn up in her underwear, there's nothing I can do about it.

Painting only in pale colours was surprisingly tricky, and there are areas I'm not entirely happy with. However, I'm happy enough with how she's come out. 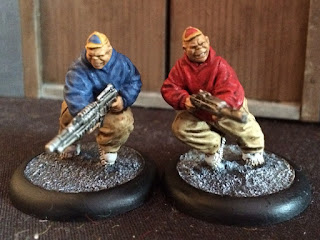 Finally, we have the twins, Tweedle Dum and Tweedle Dee. Both packing firearms, these two currently provide the damage threat in the crew. They also act as bodyguards for the Hatter, who's probably the weakest leader in the game. I resisted the urge to paint them in the same colours to annoy and confuse my opponents, mainly because it would also confuse and annoy me.

This crew is delightfully colourful and themeatic, and as I grow them, I'm going to try to ensure that I maintain that idea. I'm hoping that KM will release a henchmen pack featuring Walrus and Carpenter (seriously), but in the meantime I'm got a couple of ideas to include a Cheshire Cat themed villain, either using a different paint scheme for a Catwoman model, or converting another character into the assassin Cheshire.

I think I'm going to enjoy this.