In amongst all this superhero painting I've been doing, our little gaming group has turned once again in the direction of Dropzone Commander. Partly this is due to growing sense of the impending arrival (in theory this Summer) of Dropfleet Commander, also from Hawk Wargames, for which we all backed the Kickstarter. Mainly, however, it's because this is fundamentally a cracking game. 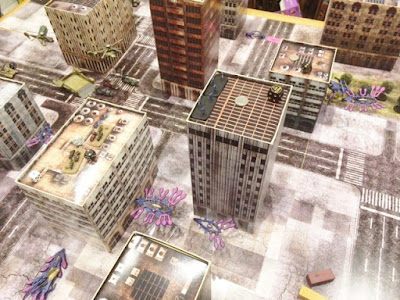 This meant, for me, getting my Resistance army up to 1000 points painted. DZC is the only game in the past three or four years for which I've fielded unpainted models and I really don't like this. So before our game on Sunday, I put in some work on finishing off some units I'd previously started. 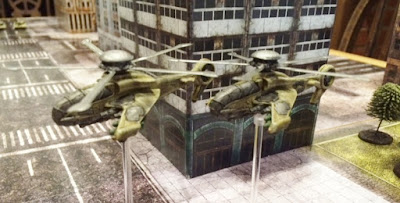 First up, my Cyclone attack helicopters. These just needed a little bit of detailing doing and attaching to their stands. These are probably my favourite models in the army in terms of both appearance and game play. They just look cool, evoking memories of Airwolf, Blue Thunder and Apocalypse Now. In game, they are my primary anti-tank unit with the speed and manoeuvrability to ambush enemy tank with a barrage of missile fire. Their limited ammo also means you have to be careful with them and pick your targets, especially against the Shaltari, with their skimmer bonuses and passive countermeasures making hitting them more difficult. 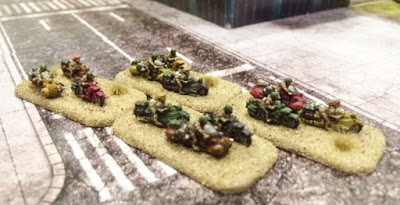 Next, the Free Riders. This little guys were extremely fiddly to paint, as not only are they small, with lots of details, but they also really need to be different from each other. I've stayed within the palette that I'm using for the army which hopefully makes them fit in, but also seem a bit individual.

As annoying as they are to paint, they are much more annoying for my opponents. Fast moving infantry that are incredibly difficult to hit, can enter buildings to search for objectives, and are also really effective at taking out enemy armour with their sticky bombs. After only a few games, these little guys are already high on the hit list because of the trouble they can cause. 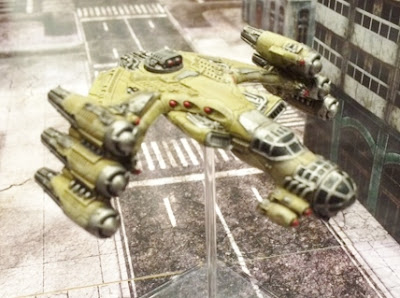 Another Lifthawk. This is the third of these that I've done, and although it wasn't a chore to paint, it reminds me how much I dislike repeat painting these days, giving me a timely reminder that starting new armies for Kings of War or Bolt Action might not be the best idea. I've modelled this one without an AA Cannon for the time being. This is mainly due to points, and I've left the mounting on the top unglued so that in larger games I can add the AA gun. Currently, I'm using this for my infantry as not having the AA gun prevents me from being tempted to use it as a flying tank, and makes me keep it near the in infantry for fast extraction. 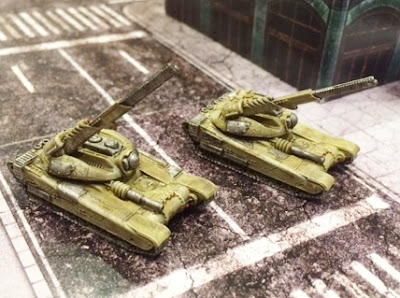 Finally, my Zhukov anti-aircraft tanks. As games have got bigger, I've found that my Gun Wagons and the AA guns on my Lifthawks have become insufficient for dealing with the bigger flying threats like the Shaltari Fire Drake, or the fast movers that have begun to appear. The Zhukovs are built on the same chassis as my Hannibal battle tanks, but are armed with rail-guns rather than cannons on the turret, however, due to the fact that the rail-guns still pack a punch and the Zhukovs still have the forward facing hull mounted gun, they can also serve as main line tanks in a pinch. They cost significantly more points than the Hannibals, so I field them without a Lifthawk. Their 24" range means that driving on isn't too much of an issue and their main job is to protect my back line anyway. 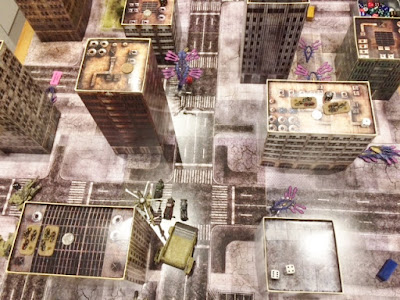 Sunday came round and Matt, Pete and I played a three player Search mission in which we had to find five objectives amongst about 40 possible objective. Matt's Shaltari army found itself trapped between my Resistance and Pete's UCM forces from deployment, and seeing that Pete's force was brimming with AA weaponry, he turned his flying circus in my direction.

I didn't have my Zhukovs ready so my only AA unit was my Gun Wagons, which despite knocking out one of Matt's gates on the first turn, were quickly taken out of action. Leaving me with no real way to deal with Matt's Fire Drake, which began liberally toasting my forces. However, a squad of Free Riders found an objective early, and despite dying and briefly losing it to Matt's Tarantulas, I did manage to retrieve it and get the objective off the board for an early lead.

Whilst Matt and I were pummelling each other, Pete's UCM were advancing across the board like a grey tide. Matt had left his Jaguar Warstrider to hold up the advance, but it was eventually taken out by Pete's Drone swarm. However, despite being relatively unopposed, Pete couldn't locate an objective and the next one to be found was by Matt's embattled Shaltari, who quickly pulled off some teleportation shenanigans to allow him to secure it.

What followed was one of the reasons I like this game. The random placement of the potential objectives meant that not only did three of them turn up in the empty table quarter (something we'd joked about earlier), but they were each found by a different player, on the same turn, with unsupported forces no more than 10" from each other. The subsequent mad scramble saw us desperately rushing units to the area, trying to simultaneously destroy the enemy units, whilst at the same time protect our own objective.

Pete's infantry narrowly escaped my pursuing Cyclones, whilst Matt's Braves took heavy fire but also managed to get their objective to safety. The speed and evasiveness of my Free Riders saw them hand off the objective to the Hannibal, whose Lifthawk performed a swift pick up and drop off manoeuvre to see one of my slowest units make it off the board edge.

With Matt and I now equal on VP's, the game would be decided between us on kill points, and so a bloodbath ensued. Pete, unable to win at this point, just decided to kill stuff! We were trading shots all over the board in a desperate attempt to rack up kills. I figured that Pete killing my stuff didn't matter, so I went after the UCM units rather than the harder to hit (but easier to damage) Shaltari. I also made use of tactical withdrawal to howls of derision, picking up my crippled command tank and flying it off the board (again, something I like about this game, as this is more in keeping with real world tactics), denying Matt a potential 125 kill points...which is roughly the amount by which I ultimately won the game!

This was a cracking game, and I was surprised to win. I get the feeling that a feature of the Resistance is that you always feel like you're outmatched and losing, until you win. Which sort of feels right, given their background. 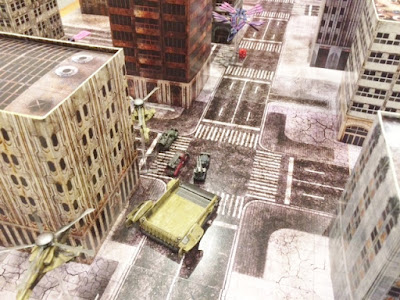 On Tuesday, as a bonus game, Matt came round and we had a 1000 point game of the Targets of Opportunity scenario. This was much more cat and mouse than Sunday, as we both desperately tried to find objectives in large buildings. Ultimately, I had five squads searching as opposed to Matt's two, and this meant I found my objectives sooner and so was able to get them off the board to win.

Matt really had the wrong list for the scenario, and the fact that it was tight at the end is testament to how sneakily he uses his gates (he's started to use the damn things to box in my flying units). He'd left out his third infantry squad to include his Warspear fast mover, which was shot down by my Zhukovs near the end of the game.

The Zhukovs really proved effective at keeping Matt's flyers at bay and I suspect will prompt him to buy an Ocelot Warstrider to make them hide in turn. A really good feature of this game is that everything can be countered, you just need the right tools for the job. As such, I know that I'll have to face Pete's gun-line of doom again at some point and so work is afoot to get my own fast mover painted to allow me to put at least some pressure on his Kodiak and Longbows before the blow up my entire army.

Dropzone Commander is a great game with tactical depth, a sense of realism and some fantastically detailed miniatures. If you've not tried it, you should give it a go. I'm hoping Dropfleet Commander can live up to these high standards.
Posted by Kieron at 02:40