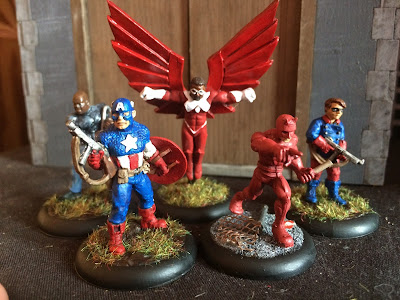 With the release of Captain America: Civil War just around the corner I felt that my own Anti-Registration heroes could do with a boost in case I felt like playing some Civil War themed games, because currently Hawkeye would be alone in getting his ass handed to him by the combined might of Iron Man, Black Widow, She-Hulk and Spider Woman!

Therefore I've painted up the core of the Anti-Registration forces as they appear in the comics: Captain America, Daredevil, Falcon and Luke Cage...oh, and I've done WW2 Bucky for good measure! 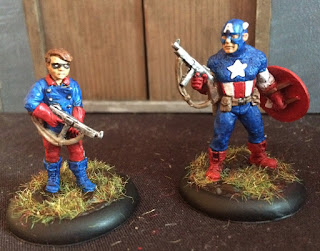 You wait around ages for a Captain America, and then two come along at once!

Cap and Bucky are from What The? Miniatures, the same people who made my Red Skull. However, as they obviously infringe on copyright they were removed from sale quite quickly. Interestingly, the model I used for Red Skull is still available - you can't apparently copyright skull-headed Nazis.

You'll notice that both models are packing Thompson sub-machine guns, which sort of roots them very much in WW2 and as well as being suitable opponents for my Hydra cell, they actually might find themselves in a few games of Bolt Action should we decide to do anything Weird War 2.

Bucky was a bit tricky to paint in some ways as, like many models holding guns close to their body, there's always a bit of ugliness where the weapon meets the body.

Cap was really interesting to paint having recently done the Knight Models version. In comparison, the KM model is clearly a better sculpted model, however, this guy is so much more cleanly cast and details like the stripes are actually moulded on to the model, making painting him much easier to paint.

I was given Cap and Bucky by Simon from Brummie's Wargaming Blog, sort of in response to me giving him the Arkham Knight model I won in Lichfield. Big thanks to Simon, as these are great models. 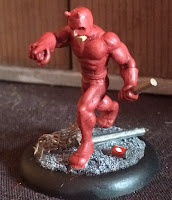 Daredevil is built using the Crossover Miniatures model I'd had earmarked for making Captain America from before getting the two versions you've seen. I'm really pleased that I didn't need to paint all of Cap's details on to this model, and Daredevil only required horns and a baton adding.

Unfortunately there's a chunky mould line down the middle of the model. It doesn't really bother me, but it would some people, and is indicative of a bit of a drop off in quality in Crossover's like after their initial release.

He's based on an urban base because Daredevil doesn't really suit the rural style I've taken with the rest of my bases for the Marvel project. Also, I'd already done this base for Nightwing, so when I re-painted him as Colossus, it seemed a shame to waste the base. 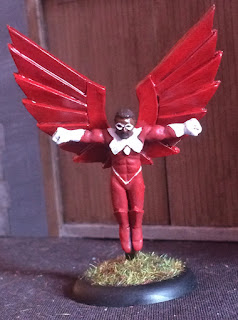 Falcon, Cap's other sidekick, is another later Crossover Miniature and it's very flat static pose is something that crept into their line. The wings are somewhat chunky as well, which is why I used this model for Falcon rather than Angel from the X-Men. Falcon's wings are a flight harness rather than actual wings and so the mechanical look of these works okay for the character. I suppose you could use the model for Archangel  as well, but that's not the version of the character I ever really liked.

Finally, Luke Cage, the hero for hire, is actually a re-purposing of a Clix model I'd repainted and converted to use as Tube Prisoner in BMG. However, as with Nightwing, my unofficial models just aren't getting any table time, and as this guy sort of looks like Luke Cage, and is slightly larger than the other models, he'll do for now until I pike up a better version.

That's it for now, but I have been busy so stay tuned tomorrow as I'll be bringing out some villains.
Posted by Kieron at 06:12