Given my appreciation of a good (or not so good) pun, there really wasn’t a blog post title that I could use for this model that wouldn’t bring in the wrong sort of traffic.
Why? Because Fisto... 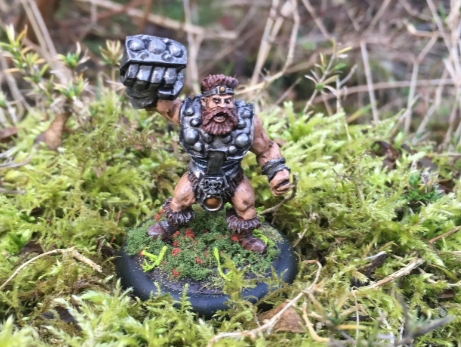 I really don’t know what Mattel were thinking when they named Fisto. Perhaps the 80’s was just a more innocent time. Perhaps they were cynically laughing their heads off in the planning meeting.
Whatever the truth of the matter, this extract from one of the mini-comics (that came with the toys they sold to children!) suggests they were either really naive or really, REALLY cynical. 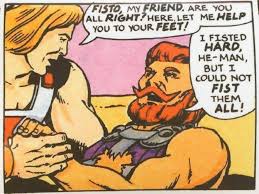 Anyway, my Fisto (stop sniggering at the back) is based on the 2002 cartoon version and is sculpted by the same chap who made my Ram-Man (I said stop sniggering!), and as such he’s a fairly large chap (this is your last warning!).
In 7TV this means that he’s on a large base and gets an extra wound, but a easier to hit in combat. I’m not sure how I’m going make his ‘fisting’ work (no, lubricant will not help!) as an attack, but I think there are attacks that allow you to choose whether to do damage, stun or push the opposing model, so that might be something I’ll try.
In the 2002 cartoon series, Fisto is Man-At-Arms’ brother and, it was hinted before the show was cancelled, Teela’s real father after a wartime liaison with the Sorceress.
The addition of Fisto makes this the first post in a while where my tally is starting to make movement in the right direction. On top of Fisto, my idea to use an eagle for Zoar has struck a chord with Leon (Pulp Citizen) and I’m sending him my spare eagle, which takes one off the acquired pile:
Acquired: 62
Painted: 16
There’s still a long way to go though.
Posted by Kieron at 01:21