He-Month: Birds of a Feather 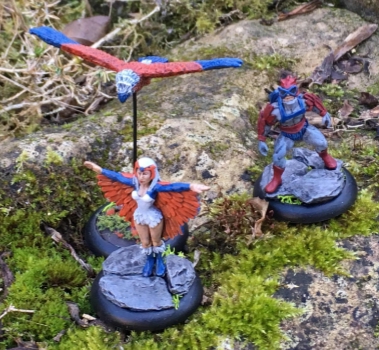 After the Great Rebellion and the Evil Horde, it’s time to reinforce the Defenders of Grayskull with the addition of an an Air Force. This comes in the shape of Stratos, chieftain of the bird people of Avion, the Sorceress, guardian of the secrets of Castle Grayskull, and Zoar, the alternate form of the Sorceress.
Stratos is from Quest Miniatures’ second wave of Masters of the Universe miniatures and is a faithful rendition of how the character appears in the Filmation cartoons. As such, he’s not the most exciting model to paint, but he was simple enough.
In retrospect, I probably should have based him differently, as he blends in to the rock base a bit too much. However, standing on rocks seems appropriate for the leader of a mountain people.
The Sorceress is also from Quest Miniatures and is in her classic pose from the title sequence. I really like this model. But I’m a bit irritated by the eyes, which may get redone.
I’m not sure how I’m going to represent her in game terms, but I’m pretty sure she will have the Psychic trait - but it not clear what else I’ll add from there.
The last model, Zoar, is the alternate form the Sorceress takes when she leaves Grayskull. Much reduced in power, Zoar will be an extra which will serve as an advance scout for the forces of good.
The model is one of three 15mm giant eagles from Hordes of Things, that I realised I wasn’t using in my Wood Elf army since I repatriated my two 28mm Gianf Eagles back to Lord of the Rings.
As such, I’m going to have a go at Screeech, Zoar’s evil counterpart, using the same model, which is fitting as that’s exactly what Mattel did.
The model isn’t amazing, and the beak is the wrong shape (it makes Zoar look a bit mike a parrot. However, I didn’t have to but it saves me buying anything.
On the subject of buying things, I have actually bought a couple more things for Masters of the Universe. Also, I’ve finally received some custom models that I ordered over a year ago and sodespite this week’s progress, the ally continues to get worse:
Acquired: 63
Painted: 15
However, it’s half-term this week, so I have a bit of a chance to make a dent in my lead mountain.
Posted by Kieron at 07:58