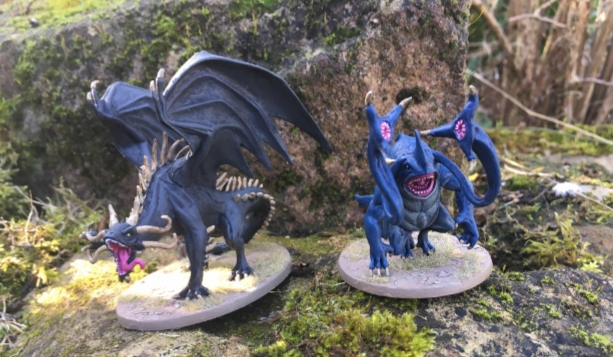 I know I’ve been churning out Masters of the Universe stuff for the past few weeks, but in gaming terms, we’ve decided to return to our Descent campaign. This meant me finishing off a couple of monsters as we’re nearing the end of the initial campaign and there are a couple of creatures I’ve not used yet due to lack of paint: the Merriod and the Shadow Dragon.
The Merriod (I’m disappointed they didn’t go with the name: Sharktopus) is a walking shark with tentacles coming out of its head with lamprey type mouths at the end - clear evidence of a design meeting compromise.
I’m really pleased with how this has turned out, especially the lighter colour on the underbelly. I also like the details like the second row of teeth in the mouth.
The Shadow Dragon, I’m less happy with. I’m not sure my combination of inks and drybrush is really cute the mustard on such large expanses if skin.
However, I’m more disappointed with the spines, which probably needed a lot of time spent on stripping mould lines, so all I. All he’s a bit of a mess if you look closely.
Still he’s done, and if I really want another crack at it there’s another version of the same model to do as I’ve only painted enough of each creature for a three player campaign.
Not only does this quick and dirty post add another two to the painted pile, but I’ve also sold a Rumbleslam model that was too big for m purposes and I’m giving Matt a billboard for a 7TV project (however, he’s giving me something in return). I’ve also avoided more free models from Wargames Illustrated as I’m passing a couple of Lancers on to Pete in he hope of encouraging him to do some Napoleonic French.
To cut a long story short, the gap has closed a tiny bit.
Acquired: 62
Painted: 21
Posted by Kieron at 06:04