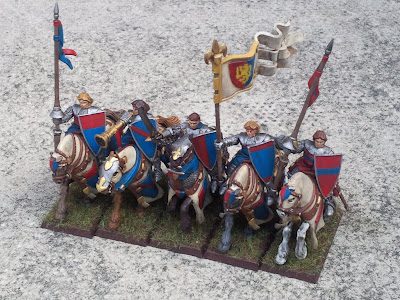 The Knights Errant are done and I've met my August target. I have to say that there was a point where I thought I wouldn't. Two weddings and a seventieth birthday all in different corners of the country have put some unexpected time pressures on me. Throw in a couple of days in Scarborough and tooth extractions and I was up against it.

However, they're done. I've maintained the base colour scheme, reflecting that these are household knights of my (yet to be bought, let alone painted) General. However, I've taken the look of the 4th edition Bretonnian army by leaving the Knights Errant helmetless (80's soft rock hair-dos all round) and without crests on their shields, to reflect that they have yet to prove themselves. If you study the army closely , you'll also notice that the Knights Errant have the same field designs as other models in the army, a hint that these are their sons and heirs. 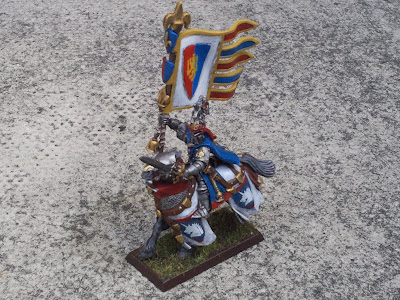 Also this week, I've been performing some cosmetic surgery on my Battle Standard Bearer and replaced his banner. There were a number of reasons for this: I wasn't to keen on the original banner in the first place; I think I'd got the colour balance wrong on the banner so it was too dark; it was also a big chunk of lead that unbalanced the model and meant it kept falling over, causing chips and damage to itself and other models. So, in a fit of pique I tor his arm off, hacked of the metal monstrosity and pinned a plastic banner in its place.

I'm much happier with the final result. The colours are better and brighter (more 'heraldic'); the model looks less ponderous; and it doesn't fall over all the time. I'v also worked out what the tiny shields on the knights' sprues are for and so in time I'll add some to the other banners. 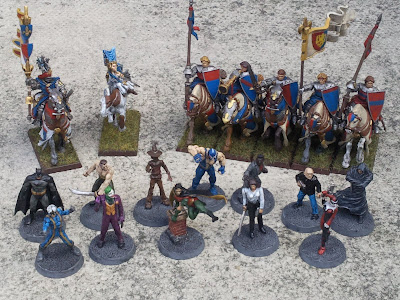 There you have it. I'm calling time on this month as I'm starting a new job in September and I need to get up to speed on some stuff next week. A fair amount done (to be honest, I'm not sure that all of the Batman stuff was done this month, but they're in the picture anyway) and I'm making good headway on the army. I've also had a fair few battles this month and even won one! 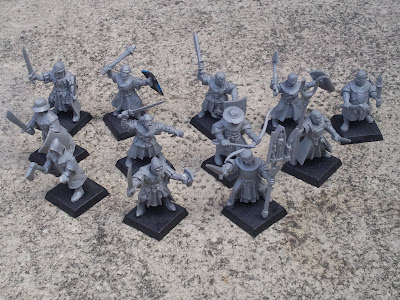 Next month, I've decided to give myself a bit of a break. The new job, being fed up of painting knights and wanting to leave some possibility of working on other projects mean that I'm not being too ambitious in my target setting. Therefore, next month's target is the completion of the Grail Reliquae unit which means painting a dozen or so Battle Pilgrims, all made from bits of Men-at-Arms and Peasant Bowmen - proper Cheaphammer (have you seen the cost of the proper models?!?!?).
Posted by Kieron at 06:05