As is the usually case with the summer, I never have as much time as I think I will. A series of family events and trips away have put me behind on my target for the month. However, I am not downhearted and have arranged a 1500 point game against Craig's Tomb Kings as an incentive to get things done.

So without further ado, here's where I'm at: 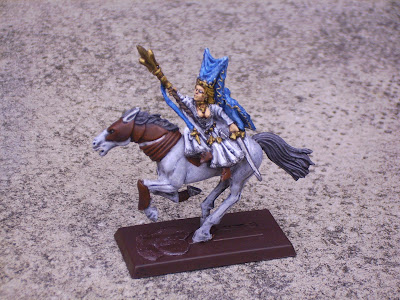 This is Giselle's younger, more buxom, sister Chantelle. Overall, I'm quite happy with this model, although the face is a bit wacky if you look at it from the front (not sure why). I'm really happy with my decision to use an Elven Steed as opposed to the horse she came with - it not only adds more dynamic movement (which matches the knights she'll be with) but it also references the fluff connection between the Lady of the Lake and the Wood Elves.

Obviously, the base needs finishing but I'll do that when I've finished the Knights Errant. On which subject, I'm slowly getting their horses done (have I mentioned that I hate doing horses?) and the knights are sitting in their undercoats ready for me to start on them. I'm hoping they'll be done by tomorrow so that they can die gallantly when they are foolishly lured into charging Craig's Heirotitan.

As for my other project, the major criticism Matt had of my new game when we play-tested was that the characters he was controlling were a bit samey. This is easily fixed by using a different arrangement of characters, and so I present the League of Shadows: 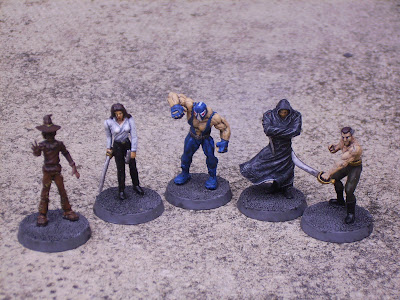 For the uninitiated in Bat-lore the characters above are the Scarecrow (the Master of Fear, played by Cillian Murphy in Batman Begins), Talia al Ghul (the daughter of Ra's al Ghul and eventual mother of Batman's son), Bane (the 'man who broke the Bat', and apparently the major villain in the forthcoming film 'The Dark Knight Rises'), a League Assassin (think ninja), and Ra's al Ghul himself (head of the League of Shadows, played by Liam Neeson in Batman Begins).

Technically, this lot are not a 'team' but as they have all, at some point or another, been part of the League of Shadows (or League of Assassins) I figured that they'd give Matt what he was after. This is especially true as they sport a range of powers including Super Strength, Fear Gas, Regeneration as well as swords, knives and guns. To enable these powers to be represented in game, I've completed the powers for the rules. Hopefully we should be able to reflect these characters appropriately with the rules.

As for the models, although the Scarecrow wash just a simple wash and touch-up of the existing paint job, the rest were full repaints. I'm fairly happy with them although this group do reveal the limitations of Heroclix sculpts. Talia has a bit of a funky pose and (although you can't see it on the picture) an almost dislocated arm, Bane has a severe flat spot on the back of his arm (and looks like he watches 'The Word') and all of the faces lack character. However, they're all improved from their original paint job and are perfectly adequate for my purposes.

Anyway, enough of this jabbering. I need to get back to those horses...I hate painting horses...
Posted by Kieron at 06:43