Hey McCloud, get off of my ewe!

This week saw me trying a new game out, and a new period. My dad's been playing around with some free rules he got for small skirmishes of Border Reivers to make it applicable for Highland Clan raids during the Civil War period and we gave the rules a first test drive. I would be leading the raiding party of about twenty strapping Jocks, and my dad would try to repel them with a slightly larger, but less skilled mob of tartan clad nutters.

We decided that the aim of the game was to contest three objectives: the croft, the sheep herd and the cattle herd. I would have to burn the croft and steal the herds, my Dad would have to stop me. 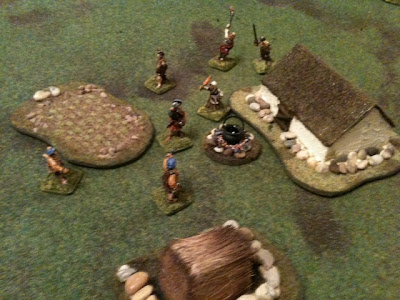 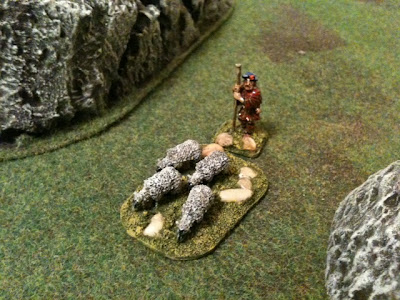 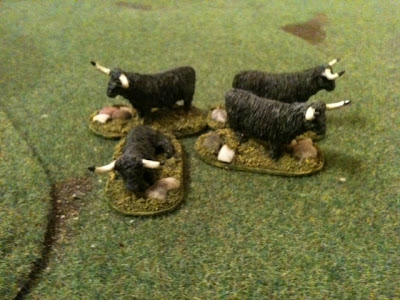 As this was a test game, we changed and adapted the rules throughout the game, including adding rules for burning buildings, changing the panic rules and so forth. However, the game played much like most skirmish games with an IGO/UGO system of alternating by unit - an activated unit does all its actions, then an opposing unit is activated.

I deployed with the bulk of my raiding party going after the two herds whilst a small party were tasked with a 'commando' raid on the Croft. Here you can see my brave chaps menacing an old lady: 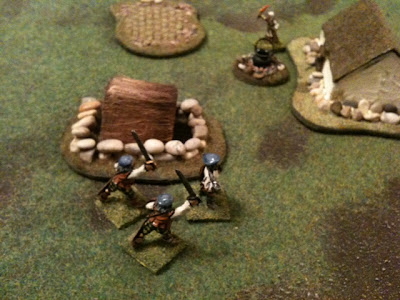 As it happened, my dad put most of his forces within reach of the Croft and left the defence of the herds to a small band of untrained and ill-equipped levy. As such my raiders advanced relatively unopposed: 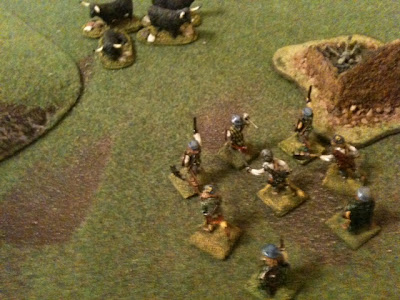 And after a brief exchange (the other guys had only a single musket), were able to scurry off with a fine herd of cattle with no danger of being caught. The only thing that the opposing clan were able to do was fire their single musket with the hope that it might panic and scatter the herd. 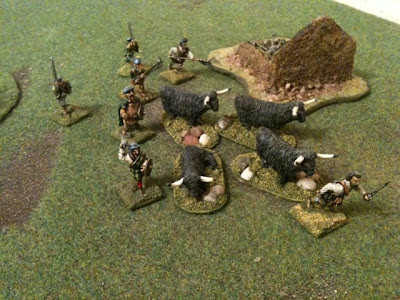 Meanwhile, a smaller group of my bandits, who had been busy driving off the enemy warriors with their ace musketry were also able to sneak up and grab some sheep and begin the long drive for home: 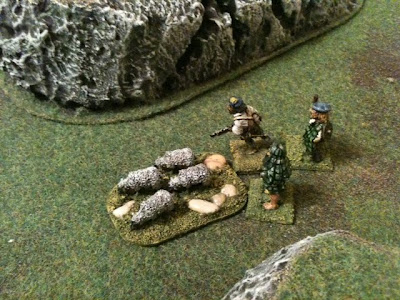 "Where are the enemy warriors?" I hear you ask. Well, it was like this...

At the start of each turn both side roll a D10 and the highest gets to choose who goes first. I managed to win about five turns on the bounce and so was always able to get my unit attacking the Croft to go first. This allowed me to scurry forwards, take up defensive positions and take pot-shots at the incoming Clansmen; which I did with unerring accuracy.

The way that the panic rules work is that any casualty has the potential to cause panic in a unit and throw them into disarray, preventing them from doing anything in their following turn, and possibly even driving them back. To match my crack-shot marksmanship, my dad's command rolls were consistently awful which meant that a single unit of six of my raiders were able to not only hold up somewhere in the region of 18 enemy clansmen, but also manage to set fire to the Croft: 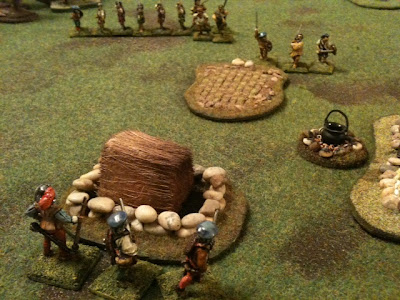 We came up with the rule that the fire in the Croft could be extinguished if my dad could get a clansman into it within d6 turns. We rolled a three and so my brave men hunkered down behind a hay bale and set to selling their lives dearly whilst the Croft burned. Despite facing half a dozen archers and a couple of muskets, I was still more than holding my own and the enemy Chieftain arrived too late to do anything useful and so was forced to stand by and watch the Croft burn: 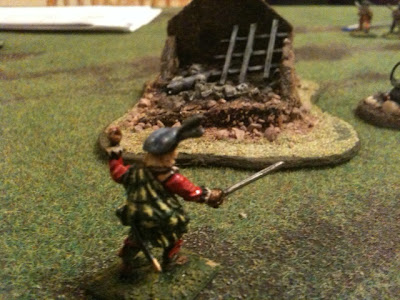 At this my remaining two clansmen decided (or were forced by the death of their leader) to make a break for it. However, once they were running the enemy found their aim and both were shot as they ran: 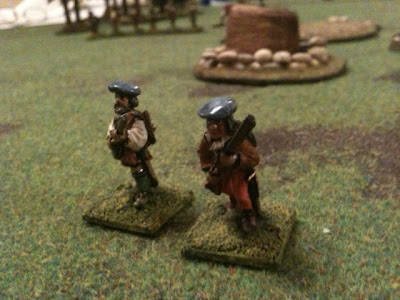 Nevertheless, I had suffered only six casualties (and had inflicted roughly similar) and had achieved all three objectives. As the Croft burned in the distance, a large herd of livestock was guided back to our farms to feed our kith and kinfolk. Ay, there'll be a fine party in glens tonight! Och-ay! 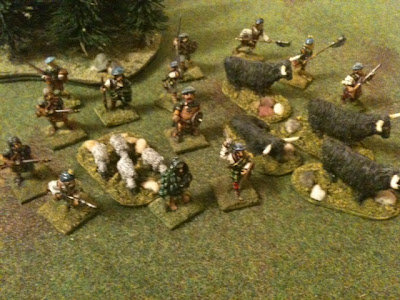 All in all a fun game with a few glitches that need ironing out, but I'll definitely be playing 'Clan Wars' again soon.

Whilst I'm on here I'll take the chance to talk targets. I did manage to achieve my targets last month by the middle of the month and then I experienced a bit of a wargaming fatigue and did nothing else for the month. I suspect that working to the deadline of the Saga tournament got me feeling like painting was a chore again and that's never good for someone who doesn't enjoy painting that much at the best of times.

So, to combat this feeling of being motivationally challenged I'm going to set a small initial target this month and see if I want to add to it later. I suspect that getting bits and pieces done as and when I feel like it will be more stimulating than setting a massive target that I'll not want to complete and I know I'll fail to achieve.

Therefore, with our inaugural Blood Bowl seas due to kick off in January, I thought I'd take the opportunity to get my team finished. I actually have enough painted models to field a starting team but it would be nice to have everything done for the start of the season. My target will be these beauties: 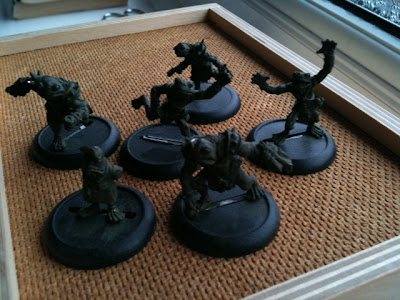 The models are from Roll-Jordan and are part of my Slann team, the Slann Frogcisco 49ers (geddit?). Two blitzers, two catchers and a coach. I've also got a few WFB Lizardmen bits lying around that I'm tempted to use to liven the team up but we'll see, as I never get as much time around Christmas as I think I will.