Another year ends and with it arrives our traditional Christmas gaming day. This year we decided to play a couple of board games and a big game of Bolt Action. We each brought an 800 point force and then decided randomly the scenario and who would be on which side.

It turned out that my Russians would ally with Matt's Partisans to combat Wes's Americans and Pete's Germans (complete with a newly minted SS unit) in an encounter that could only happen as part of Operation Unthinkable in 1945.

The scenario we rolled up was Top Secret, for which Wes had an ideal objective: a top secret Hiller Flying Platform.


In brief, Matt and I poured infantry of variable quality towards the objective, losing most of it in the process (very Stalinist, I'd say). Meanwhile, the dastardly Germans managed to convince the Americans to take the brunt of the Partisan booby traps and Wes lost two entire units.

Air power was available in abundance, but the Soviet air force was a bit more telling than the USAF, taking out the Sherman tank, whilst we lost an Inexperienced unit (my free one) and gained some pins on the T-34. Also in abundance, was artillery: we had a light howitzer and a light mortar against their light howitzer and two medium mortars, and these units proved to be more frighteningly more accurate than the typically inept snipers that dotted the field.

In the end, my Guards unit managed to grab the objective and return to the cover of a building before the German, heavily pinned, infantry were able to respond. They then handed off the objective to my Lieutenant, who almost snatched defeat from the jaws of victory by failing his orders test on turn five. There then followed some desperate shuffling of units to try to ensure that somebody would be able to run the objective off the table on the final turn. Orders tests were passed, and one of Matt's officers was able to leg it off the board to the sound of complaints from the U.S./Nazi alliance (the Tea Party?) about the cheatiness of Partisan bombs (they are quite cheaty).

We then played a quick game of Munchkin, which I won. Given that 'you're only as good as your last game', it turns out that I'm ace, and the others suck! :)

In other news, I've done some painting.

This is the Russian truck I bought at the Other Partisan Show back in October. Easy to put together, easy to paint. I'm happy with it, but I've yet to use it as I stupidly forgot to put it in the box for the Christmas game. Well done me. It turns out I suck too. 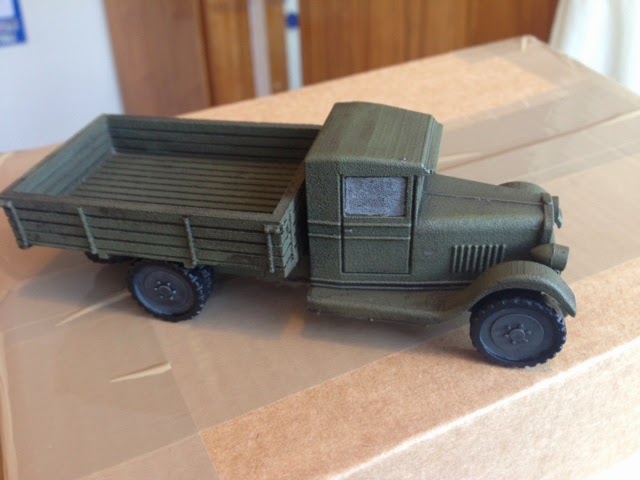 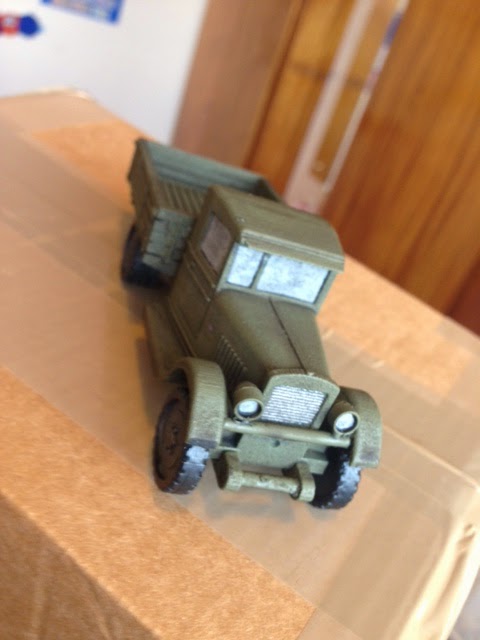 And so on to the final part of my post.

Here's what I aimed (rather ambitiously) to do over the last year:

1. Continue to build and paint Batman miniatures at a steady rate.
DONE. I can now put out a full table of scenery and can field 350 point crews for Batman, the Joker, the League of Shadows, Penguin, Two-Face, Poison Ivy and Bane (although the last three are a bit Free Agent heavy at the moment). Recent acquisitions mean that my Batman, Joker and League crews will all be official tournament viable too.

3. Begin a solo All Things Zombie campaign.
NOT DONE. Although this has come a step closer, as I now have the potential to leave games running. More on that soon.

4. Finish of my Bolt Action Russians and two VBCW units.
HALF DONE. The Russians all got done earlier in the year (although I've bought more since), but the VBCW units have been overlooked.

5. Paint my Sicillian Greeks for Impetus.
NOT DONE.

6. Play in a Blood Bowl League.
DONE. Sort of. I've played two games in a league that has struggled to get going.

7. Learn how to make the Dominion not suck in Attack Wing.
DONE. I've stopped using them and bought Borg ships instead!

8. Get games in with people from the old club.
NOT DONE. Although I've had games with a few people like Bill, Wayne and Trev, I really need to put more effort into this.

10. Keep the blog regular and become more active.
HALF DONE. The blog seems to be quite healthy right now, but it struggled in the summer. This has been my least active year so far. I need to reverse that trend. My Batman articles seem to be a good thing, as they don't rely on me painting.

I give myself an appalling score of 4 out of 10.

And now on to this year...welcome to my own Operation Unthinkable.

I am going to be LEAD PILE FREE by the end of the year. Yes. LEAD. PILE. FREE.

Each  month I'm going to identify one of the game systems or armies that I still have things to paint for, and I'm going to paint them. All. I'm clearing the decks, finishing off projects and emptying my bits boxes. Anything that isn't painted, is going to be got rid of. They can be sold, traded, given away, or incinerated, but by the end of each month, the project will be done.

To be honest, this isn't as drastic as it sounds. I've actually done a good job at keeping the lead pile under control over the last few years, and so for example for Bolt Action, I've just got a Mortar team, and MMG team, some Scouts and a Mine Dog team to do. This is much the same for most projects, and I'm going to be careful about what I choose to do, when.

So there you go. There's my stupidly unrealistic resolution. What's yours?