A New 'Face' In Gotham

Following a busy period at work, I'm back in a position to get the blog moving again, mainly becuase I've got the time and energy to paint again. Most of these models were pretty much finished a couple of weeks ago, but I dragged my feet on the last one, but here is a new crew featuring Black Mask, the main villain from possibly my favourite Batman story arc: War Games. 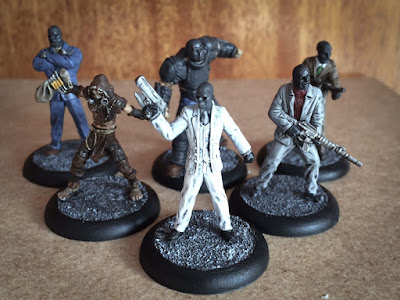 First up, the boss man himself, Roman Sionis, the Black Mask. Essentially he's really just a gang boss, however he either (depending on what continuity you follow) has a hideously disfigured face due to self-inflicted scarring during the events of No Man's Land, or he's wearing a mask. Either way, he has a penchant for torturing his enemies' faces. Nice.

I decided to risk the white suit, but kept painting him simple with some heavy dry-brushing, and it seems to have come out well. I'd like to be able to pick out more details on his skull, but I'm happy that he's come out looking okay. 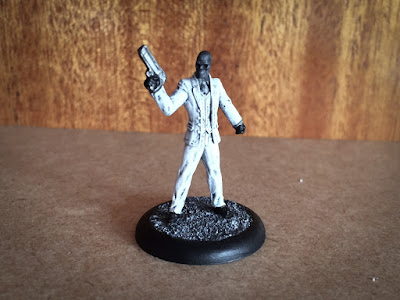 The henchmen (or 'False Facers'): Mesh, Dirty Tom and Goon, were also quick and simple to do, with single colour suits and and black masks. Dirty Tom (with the Tommy gun, geddit?) actually comes with a traditional gangster's fedora, but I did a quick headswap with a sculpting head I picked up from Hasslefree Miniatures at Salute, which helps him to fit in.

The big guy in the armour is Anatoly, and is the model who was holding up proceedings. Firstly I has to chop him off the huge expanse of tactical rock he was attached to. Then I had to work out how I was going to paint him. I again opted to keep things simple, with black armour and blue trousers. I've added a little lighter colour to him through painting his body as if he's shirtless. This serves to provide a contrast to the armour, and I think works well enough. I really didn't enjoy painting this miniature, and if he wasn't in the starter pack, I wouldn't have bothered with him. 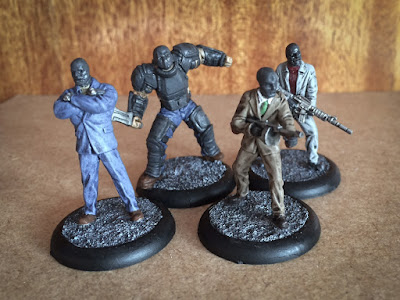 Finally, is the Arkham City version of Jonathan Crane, the Scarecrow. Thus guy works as a Free Agent for the bad guy crews and is a lower rep value than most, which makes him fairly versatile. This was another model that I was initially not keen on, but actually, up close, he's got a lot of useful detail which meant even I could make a good job of him. This has been perhaps my most surprising purchase, has he not been going second hand, I wouldn't have bothered, but I'm really glad I did as I really like him now.

Just for reference, in the War Games story arc, Scarecrow joins Black Mask's forces before being callously used by Sionis to set off the security features of Oracle's secret hideout at the Gotham clocktower. It seems appropriate to put him with Black Mask, as being a bit of a theme fan, this is the crew I'm most likely to use him in. 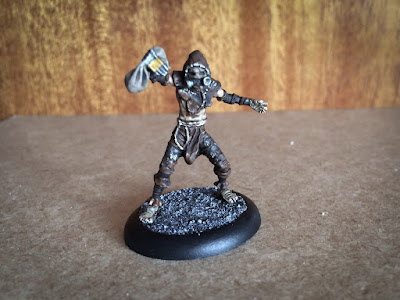 As a side note, I'm experimenting with new photo editing software on my phone. Do you think the images are better than usual?

My BMG paint queue has expanded in recent weeks, and with the arrival of my order including the new expansion book this week, it should only get bigger, so there's plenty to come.
Posted by Kieron at 10:20