The Battle of Four Armies

It's Christmas, and that means one thing in our little world of wargaming...Christmas Wargaming Fun Day! It's one of the few times in the year that we get to do big games, and this year was no exception.

Originally, we were going to use the day for learning about Dropfleet Commander, which we all backed as part of a Kickstarter campaign over a year ago. Wes received his PHR fleet back in October in the first wave of posting, however Matt finally got his Shaltari on Christmas Eve, and both Pete and I are still waiting.

Therefore, we needed something else, and into the breach stepped Kings of War. I broke out the Wood Elves I re-based earlier in the year, Pete supplied his Dwarfs, and Matt brought both Bretonnians and Empire, as Wes has never been a WFB player, and so doesn't have an army.

We arranged the game at 3000 points per side (we could/should have gone higher, but I underestimated how many points I could do with my Elves), with the Elves and Bretonnians fighting some kind of border skirmish with the Empire and Dwarfs somewhere at the foot of the Grey Mountains. (No, we haven't abandoned the WFB background - screw you GW!) 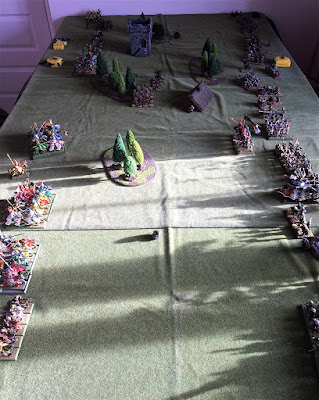 The initial deployment saw the Elves face off against the Dwarfs, and the Bretonnians line up against the Empire. One of the downsides of KoW, is that the allies rules really discourage intermingling armies, as you can only gain inspiring re-rolls from your own sides. However, Wes and I did concentrate our archers at the far end beyond the castle, because everything else in our armies was built to charge. 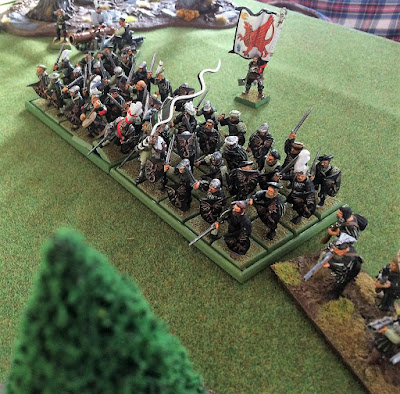 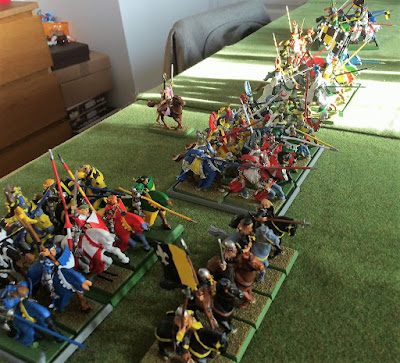 Matt had created both human lists before he flipped a coin to decide which side he'd be on, to keep things fair. He'd given Wes a very aggressive force, using the Brotherhood list in Uncharted Empires, featuring four blocks of knights, Pegasus knights and a few peasants. The tactical advice we gave Wes was, "get stuck in!" 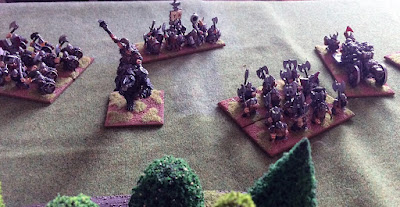 Pete's stalwart Dwarfs added a flame cannon, a cannon, an organ gun and a block of crossbows, backed up by several blocks (including one horde) of Dwarf warriors and a couple of berserker characters on giant badgers (he was suitably chided by Matt and I for including stuff that wasn't 'warhammery' enough for our tastes). 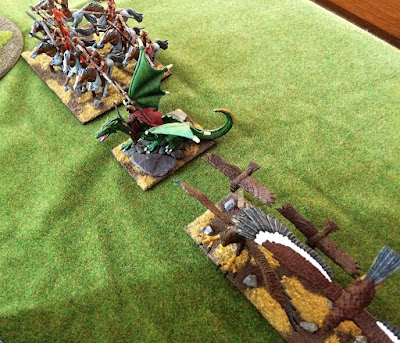 My friendly and fluffy Elf list had managed to squeeze in a Dragon, a Treeman, a unit of Eagles (Drakon Riders), a unit of cavalry and a couple of fast moving forest spirit units. It wasn't exactly subtle.

And so the stage was set for Wes and I to charge hell for leather across the board, hoping to weather the storm of lead enough to deliver a hammer blow. Techincally, the scenario was loot and kill (I think), but we all knew that this was going to be about who smashed whose face most effectively.

The first two turns went rather predictably, with Wes and I advancing, whilst Pete and Matt braced for impact. I managed to get both of my forest spirit units killed, one with a failed surge into the Dwarf general, and the other by standing in front of the massed firepower of a Flame Cannon, Cannon, and Organ Gun that had been combined in the centre of the enemy line.

In return, we managed to silence the Dwarf Cannon with arrow fire, and one of the Empire Cannons with peasant cavalry.

Turn three was when the inevitable impact came. My Elves smashed into the Dwarf line, with my cavalry ans Eagles breaking the Dwarf horde, but the Dragon and Treeman faltering on their respective targets. It looked like the Elves would get caught in an evelopment as the Dwarfs proved difficult to budge. 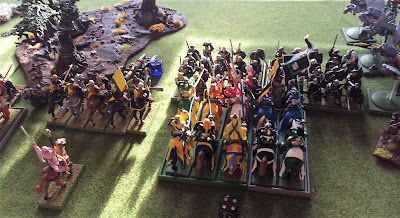 Matt did his best to disrupt Wes' charging knights, and the Bretonnians initially failed to shift the hordes of infanty, despite the support offered by flank charging knights. The Empire Handgunners were negated, but with their charge spent, the battery in the centre still dishing out horrendous damage and the Steam Tank and Griffon poised to charge, the Bretonnian position also looked precarious. 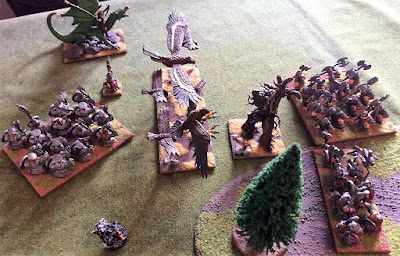 However, Pete also struggled with nerve rolls when he piled damage on my expensive units and although the cavalry were eventually broken, the Eagles, Dragon and Treeman held on against the odds, managing to take out the crossbows and Dwarf General, despite taking massive amounts of damage. 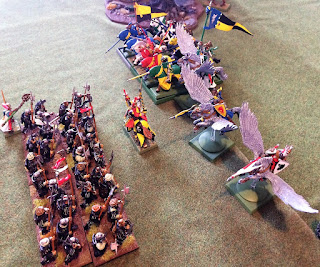 Meanwhile, Wes lost all but one of his Knight blocks to Matt's combined artillery, and fierce charging Griffon and Steam Tank. However, the Grail Knights held out long enough to delay the Empire forces, allowing his Knights Errant to win the shoving match with one of the infantry hordes, and turn the flank, eventually finishing by charging all but one of his remaining units into the Empire General.

At the end of the game, Wes and I were delighted that we didn't gain an additional turn, as even a single point of damage would likely have seen the Dragon, Treeman, Eagles, and Knights all run delivering defeat.

As it was, we managed to win by a fair margin due to the hordes and characters we'd killed being worth a significant amount of points, and gaining the additional bonus of securing a couple of objectives to add to our tally.

Pete and Matt pointed out that winning isn't everything and that these games are meant to be for fun anyway, however, we have decided that Pete shall hereafter be known as 'Snake Eyes' and Wes and I have bragging rights for the next twelve months, due to the fact that winning a game of toy soldiers confirms us as all round superior human beings...
Posted by Kieron at 05:14