A quick post with some eclectic pairings I've been working on recently. 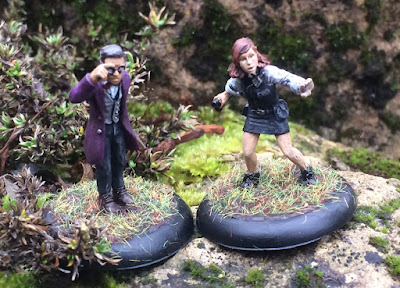 First up are the Doctor and Amy Pond from Crooked Dice. These models are sadly out of print now, along with pretty much all of Crooked Dice's not-Doctor Who models; clearly an unfortunate result of the imminent release of the official Doctor Who game from Warlord Games. However, I was fortunate to scoop these up from Grekwood Miniatures remaining stock and so can actually do some of the Doctor Who gaming I've been planning for so long.

As ever, Crooked Dice models are a pleasure to paint. Matt Smith is not my favourite Doctor, but these are lovely sculpts, and there are no decent David Tennant sculpts out there (Heresy probably did the best, but that's disappeared recently too) so there'll more than do the job for my gaming needs. 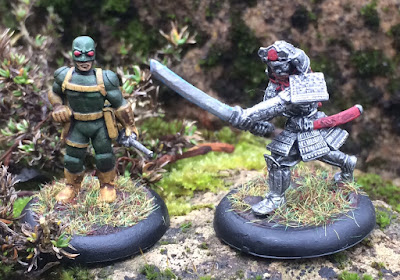 Next up, some reinforcement for my fledgling HYDRA forces. The guy on the right is the Silver Samurai; can you guess why he's called that? He's a Dixon miniature, I think, that I picked up from a show for this reason and was, as you can imagine, a doddle to paint.

The last time I used my HYDRA forces, the henchmen found themselves horrendously out manoeuvred by Daredevil and Black Widow, and one of the main reasons for this was that they struggled to generate enough plot points to activate. Therefore, I decided to add a Minion Commander to the team to enable me to use the Minion unit card and free up some plot points in game. I'd previously converted this model to turn into Baron Zemo, so I needed to replace his weapon hand, and a radio seemed appropriate for a commander. 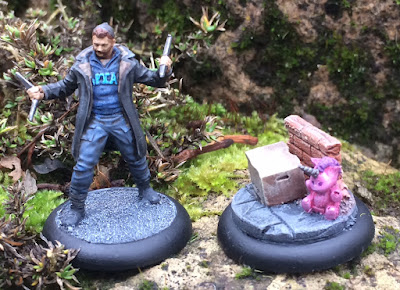 The final pairing includes Captain Boomerang from the BMG Suicide Squade boxed set. I'll admit to having felt a bit overwhelmed when 14 new miniatures suddenly needed painting, and have shied away from starting on them. However, I'm off to another event tomorrow, and wanted to include Captain Boomerang, so that seems to be motivation I was needing.

The model itself was surprisingly simple to do, something that I think is due to him wearing clothes rather than a costume. The unicorn was made from some bits I won at a previous tournament and is both a nod to the movie, and actually based on a game mechanic as Captain Boomerang has Primary Target: Loot (Unicorn), so I'll be using the unicorn as a loot counter in games.

I'm really enjoying my eclectic painting at the moment, so expect it to continue.