Scarper! It's the Rozzers!

The main part of the second of my 7TV starter sets. This time it's the Police. These five come with a Tough Detective, Investigative Academic and a Marksmen, however, at least for now, I'm not sure that those three models, lovely as they are, really fit the humdrum seventies feel of these five, and so I'm going to be backing them up with a couple of, in my opinion, more suitable models which you'll see over the next couple of days.

First up is the Sergeant. An imposing figure, with his sleeves rolled up and ready for action. He's probably my favourite of bunch. 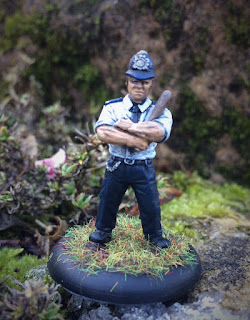 Next up is a short, rather rotund chap who almost certainly stood on his tiptoes to pass the height requirement. 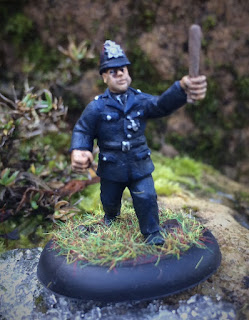 This is clearly a young officer, possibly played by Nick Berry, whose so action oriented that he's out of focus. 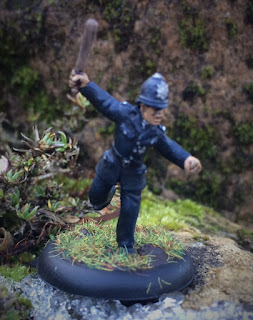 This hirsute chap makes me think that his name should be Baxter...you need to be of a certain age, and have watched BBC school based reference to know why. It annoys me that my own eyes did not pick up the flash on the hand, but the camera has. I might need to go back to that now. 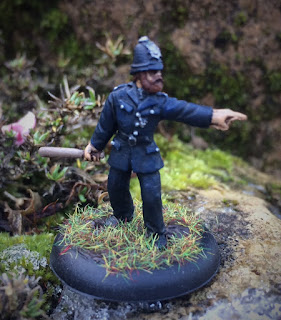 The WPC has destiny to actually be the station commander in some games as my wife has expressed an interest in playing some games based on Juliet Bravo. Am I the only one who was confused as a youngster that the title wasn't the main character's name? 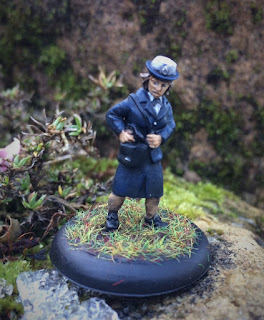 All in all, these have been quick and fun to paint. I really enjoy Crooked Dice miniatures, as there's a real charm to them. The lack the extraneous detail that clutters, and doesn't really add to, the modern CAD designed miniatures that seem to be all the rage. I often find that a lot of the details cause me a lot of hassle, for no real benefit, as nobody is ever going to notice that tiny buckle on the inside of the ankle.

Email ThisBlogThis!Share to TwitterShare to FacebookShare to Pinterest
Labels: 7TV