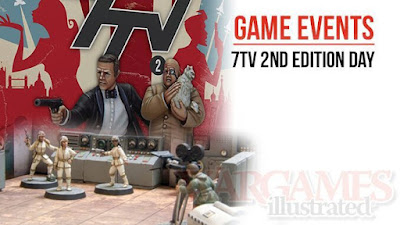 Yesterday saw me attending the Wargames Illustrated 7TV Day for a movie sequel entitled 'The Russian Job'. This was an extremely relaxed campaign day largely devoid of the usual focused tournament lists, and mainly concentrating on having a bit of a laugh.  The day was broken into three 'shooting blocks' putting together a larger narrative.

The initial brief saw my cast of Professor von Schteppbyonde and the staff of Project Meteor heading to Soviet Russia, along with several teams from a loose organisation called the 'Disruptors', to investigate something being referred to as the 'Mesti Incident', which potentially involved an extra-terrestrial item of great and terrible power...which was right up the Professor's street. Opposing were a network of notorious do-gooders referred to as the 'Valhalla Project'.

Keen to learn what he could, and then use it for his own nefarious ends, the staff of Project Meteor set out to locate Blankenhof, aid in his defection and learn what he knows. However, stood in their way were not only the KGB, but also non other than Hugo Solomon and a team from Department X. 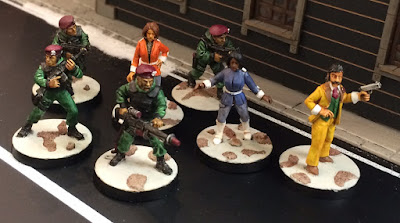 I was playing against Cameron using one of Crooked Dice's house casts, Department X:

This turned out to be the shortest game of 7TV I've ever played. The scenario required us to roll a d10 when we interrogated civillians; on a 10 it would turn out to be Blankenhof, on a 1 it would be a KGB agent. When 3 KGB agents had shown up (which happened by the end of my second turn), we had to skip straight to the Finale cards in the Countdown Deck. Cameron then proceeded to draw cards which required him to draw more cards, thus ending the game.

However, this didn't mean that it was a dull game. In those two turns, the Death Worm popped up in the middle of Department X and took down all of the X-Commandos. One of the Foxes defected to my side. Captain Franklin blasted everywhere with his plasma rifle. The Spawn repeatedly failed to form words and so were unable interrogate civilians. Hugo Solomon was able to use his Tibetan Aikido to take down Dr Kurtz, technically winning the game, although the agent also had to flee when the KGB arrived.

We worked out that Blankenhof was caught in an explosion which seemed to emanate from some of the Professor's equipment...oops! However, the Professor was able to gather some notes from his body, whilst Sylvia Smother and Bob the Janitor helped the stunned Herpetologist to escape the clutches of the KGB.

The death of Blankenhof was unfortunate, but at least the parts of the artefact involved in the 'Mesti Incident' were identified as being in packing cases located in several warehouses situated around the city of Rastava.

Project Meteor set of to one of these locations, with the aim of securing one of these crates and leaving the city before the Valhalla Project could get there. However, stood against the Professor this time was a mysterious individual known only as 'The Doctor' and his retinue of companions. 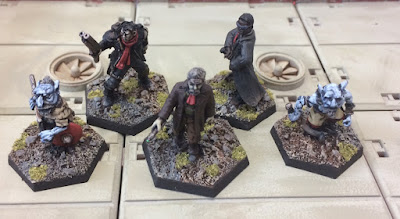 In this game I played against Mike's War Doctor and retinue (I don't know much about the War Doctor, so I'm working off the information I managed to glean from Mike in conversation):
Both sides were also given a mini (emblazoned with a Union Jack to help them blend in) to help move the artefact.

This game also looked set to be over quickly as Mike's cast got to the crate on the first turn, and looked set to drive it off the board on the second. However, driving too fast saw it fall from the roofrackless Mini, and then my scientific wonders were able to gang up on the dispersed time travellers.

The Worm and Dr Kurtz double teamed Squire, whilst the Sylvia led the Spawn into the Gribblies and the Professor lasered Luthor in the back. Bob took some shuriken to the face, but since his accident, these kinds of things have not kept him down for long. The Doctor was ultimately surrounded and overwhelmed, allowing Project Meteor to deliver the crate into the grasping arms of the Disruptors.

Several other agents of the Disruptors had also been successful and, when presented with an alien device of potential devastation, a gang of villainous masterminds were obviously going to put the thing together to see what it did...

The Mesti Device was activated and, seemingly searching for more energy, began to devour the city of Rastava. Although there was apparently a force field surrounding the city, there was a gap, a small gap, which might allow a single vehicle, or group, to leave.

Somehow cramming everybody into the Mini (it took some effort to get the Worm into the boot), Project Meteor set off at speed to get to the gap before the other agents (who'd had the same idea), all the time avoiding panicking civilians.


This game was bedlam. Cars were exploding all over the place, and grudges flew back and forth. Somehow, despite having starting the shooting match, mine was one of only a handful of vehicles to make it off the first board. Given the amount of obstacles and the fact that players were allowed to use the vehicles to crash into you, I realised that Dr Kurtz, as an Aqua-Maniac, had the ability to ove faster than the vehicles were allowed to in the scenario, and so I dropped him off and then set about trying to keep the rest of my cast alive long enough to allow him to get to the gate.

Unfortunately, my plan was rumbled with my scaly roadrunner clear of danger, and pretty much everybody set about taking out the rest of my cast. Sylvia and the Spawn were, I think, dispatched by a combination of East End Coppers and the Master. The Professor's mini was wrecked by a drive-by from an old lady in an Aston Martin, and the Worm was swallowed by the advancing  Mesti Wave.

Under threat of my cast being axed, Dr Kurtz passed two spirit tests to make it to within one turn of the end, and then, predictably, my luck failed...and there was much rejoicing!

The game was ultimately won by one of the the little old ladies companions, narrowly ahead of one of the murderous coppers, who both managed to escape the clutches of a couple of Predators. The other agents, aliens, Moon Nazis and monkeys were all swallowed by the Mesti Wave.

However, Dr Kurtz heroic run did not go unrewarded. Everybody who attended received a goodie bag/box containing 4 Plastons (which I will use as Autons from Dr Who), three 7TV dice and a discount voucher for Crooked Dice. In addition, thanks to my glorious failure, I also received a couple of Ainsty Casting vehicles, one of which, the hovercraft, has been on my 'I must get round to buying that' list for some time. 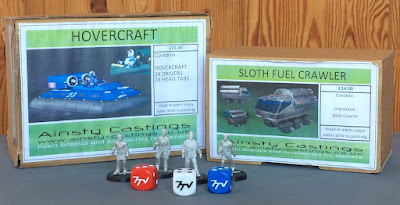 All in all, this was an excellent, if slightly bonkers, day. It was good to meet quite a few people who I know only through Facebook, and we also got quite a bit of insider knowledge about the future of 7TV from Karl from Crooked Dice. Personally, I'm more than a bit excited about the upcoming Time Lost Programme Guide which will be featuring dinosaurs and Doug McClure!