I've been struggling with a bit of a painting block recently, which is evidenced through the relative lack of painting posts in recent weeks. I'm not sure why, but it may just have been tiredness as the end of term approached. Anyway, the holidays are here, I've had a chance to rest for a bit and now I'm back with a vengeance. 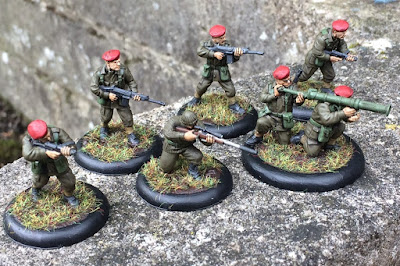 These are Crooked Dice miniatures, and as ever they are simple sculpts that are packed full of character. If I'm honest, Crooked Dice are probably my favourite manufacturer. This is not just because I got loads of free stuff at the recent 7TV day (although that helps), it's the combination of well sculpted, characterful miniatures which also lack all the superfluous extraneous details that seem to be the fashion with sculptors these days - you know, all the chains, ribbons, ammo packs, and random fiddly stitching that litter models and then require you to borrow the Hubble telescope to see properly whilst you paint them.

These guys are from one of four 7TV starter sets I purchased just before Christmas last year and I had a specific purpose in mind for each of them. The Mad Science cast were mainly to be used in games of Teenage Mutant Ninja Turtles as mutagen inspired monstrosities; the Police cast were destined to be used as the cast of Juliet Bravo in another vain attempt to get Mrs Cheaphammer playing wargames; the Occult cast were originally intended for use in pulp games but have ended up as villains in Ghostbusters, Juliet Bravo and, soon, Scooby Doo.

The Army cast had a clear goal. There were going to provide the firepower required to support the Doctor as he took on Daleks and...well...just Daleks really, as I don't have any other villains, although some Autons are now on the horizon, possibly led by the Master. 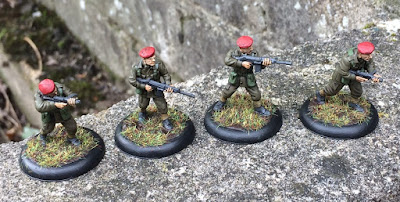 Doctor Who purists may realise that these uniforms aren't exactly correct for either the classic era (green uniforms, green berets), or the modern stuff (black uniforms, red berets), but are instead an amalgam of the two. There are two reasons for this, firstly I wanted something on the models to 'pop' and make them more visually interesting, and secondly Simon (Brummie) and Leon (Pulp Citizen) have been bending my ear about Action Force/G.I. Joe for a while now and I was reminded of one of the few Action Force (none of the American 'G.I. Joe' nonsense for me, thank you very much) action figures I owned (I was a Star Wars boy, with a healthy dollop of He-Man thrown in) was a Z-Force captain who wore green fatigues and a red beret (he ended up serving in the Endor Commando Team, if you want to know). 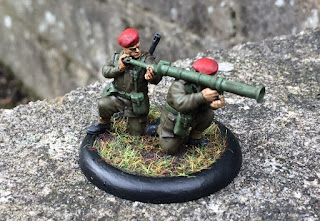 In terms of painting, they were done very simply with my usual, paint then wash and don't worry about highlighting 'technique', although I must admit to a little bit of highlighting of the faces and berets, and I'm really happy with how they've come out. Another of the reasons I really like Crooked Dice models is that the details are so well defined that washes pick them out well, which is great news for lazy painters like me. 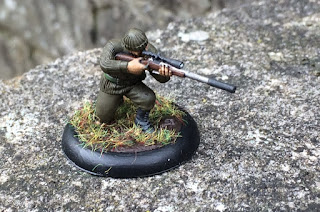 The Marksman is actually from the Police starter cast set, but I figured that given the rest of them were destined to be recreating Juliet Bravo, a sniper was more suited to a military force confronting alien invasions than taking out drunk farmers in Lancashire.

In terms of 7TV, these guys will work as a unit in game (although with the Bazooka team or the Marksman won't actually receive the benefit due to numbers), allowing them to activate for half the usual number of plot points. Technically, I don't actually have Corporal to lead them yet, although the private with the moustache (who was in danger of looking like Hitler at one point) will receive a field promotion until reinforcements arrive.

These aren't the only allies I have for the Doctor (and Amy Pond), and I have a couple more co-stars and a 'vehicle' to join him before I begin to work on the forces of extermination.
Posted by Kieron at 13:26