Rise of the Machines

When I was at Salute in April, Warlord Games decided to make the starter box for their Terminator: Genysis game available for the princely sum of £10. Given that this contained rules, dice, counters, mat, and no fewer than 31 miniatures, one look at the title of this blog will inform you as to how I reacted.

Seeing as I had some unexpected time on my hands on Tuesday, I broke out the spray paint to get me some Terminators painted.

The pictures are a little dark (it's too sunny), but I'm really quite pleased with how they've come out, especially given that these are officially the easiest models I've ever painted. Spray. Wash. Eyes. Base. Done.

They are even easier that other models that I've done a spray/wash on before, and they are made of silver plastic, and so it really didn't matter if I'd slightly missed a bit. If I have any sort of gripe, it's the fact that they are fairly small compared to many ranges, however, they do look like they might actually fit inside a body unlike many skeletal figures on the market (GW, I'm looking at you). They do scale well with the Wargames Factory plastic that I have, so there is potential there for expanding at least my Resistance models, or adding a T-1000 (I just wish I hadn't given away the Police torsos from the set. 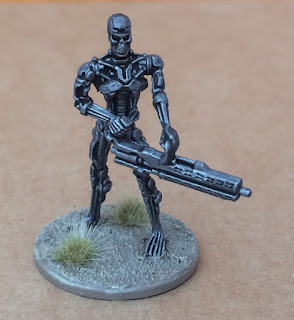 The Endoskeletons are nicely detailed models which have torsos that come separate from the legs and can be pivoted around the spine (a nice change from separate heads for a more robotic look), as well as separate arms which can be positioned at different heights to give a modicum of variety - certainly enough for mass-produced death machines. 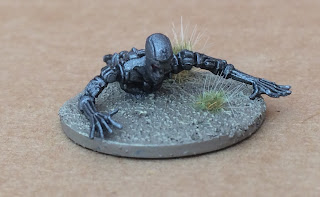 The Crawlers are single piece castings, but as they are only brought in when an Endoskeleton is destroyed, they'll never be fielded as units, so it's no worry.

The game itself is fun (I've only played two small scenarios so far) and Matt (and Mike, or is it Wes?) had already bought in so there are games to be had. I can also see them being recruited for games of 7TV, especially as Kraang Droids to fight the Turtles.

Not sure when I'll get round to the Resistance, as by default I can see them being more fiddly to do. I do have a few ideas to make them a bit more varied and interesting, so maybe I'll get to them soon.