I know during He-Month, I’m supposed to be posting something each weekend, but I was away until lunchtime yesterday, and despite finishing this week’s model yesterday, the light had gone and I wasn’t able to get a decent picture.

So, with excuses for being late out of the way, here’s the quintessential henchman, Beast Man! 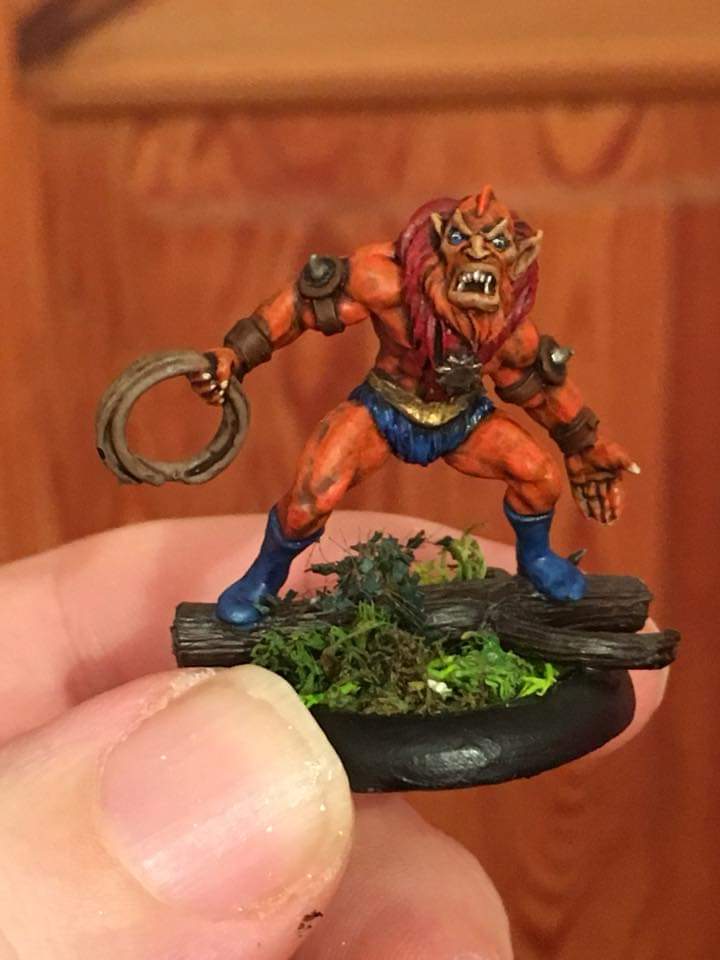 This is the last of the Quest Minis (for now) and it’s the only one to come as a single piece sculpt.

I was initially thinking of painting Beast Man in the more subdued colours of the 2002 cartoon version, but a flurry of activity on the MotU Gaming Facebook group gave me the confidence that I could make the hideous combination of bright orange, royal blue and scarlet work, and actually, I think I have.

The eyes were a bit fortunate as the character needs blue below the eyes, and I messed them up the first time round. I decided on the second go to not bother with pupils, as that’s the bits I messed up, however, by complet chance, the pupils I’d messed up, appear just below the whites I’d put in...essentially producing eyes better than I could have done on purpose.

For the base, I decided to do something a little different and place Beast Man in something akin to jungle terrain. A bit of twig (painted to look like...erm...wood), some GW ivy (which I only found again recently after buying it years ago) and a good amount of lichen jammed in, does the trick.

The only slight doubt is the new lichen I bought in York is a little bit vivid. It’s not a problem here mixed in with the remnants of my old stuff, but I might need to be careful when I return to doing jungle terrain, to try to keep things similar to what I’ve already done.
Posted by Kieron at 06:00