The last few days of snow have give me the time to paint up the beginnings of a little project I’m doing for my daughter: The War for the Magic Kingdom.

The idea for this is to paint some characters from a well known producer of animated films to use for games of 7TV in which the heroes battle the combined forces of evil. The idea for this came for the Descendants films (ask your kids) which are set after the good guys have won and the baddies have been banished to the ‘Isle of the Lost’.
Perhaps the trickiest part of this project is locating suitable miniatures as there aren’t as many ‘not’ sculpts of these sorts of characters as you’d think - possibly due to how trigger happy the lawyers representing the well known producer of animated films are.
In respect of this, you might notice that I’m being somewhat circumspect in my use of names. I don’t want to get anybody into trouble, after all. 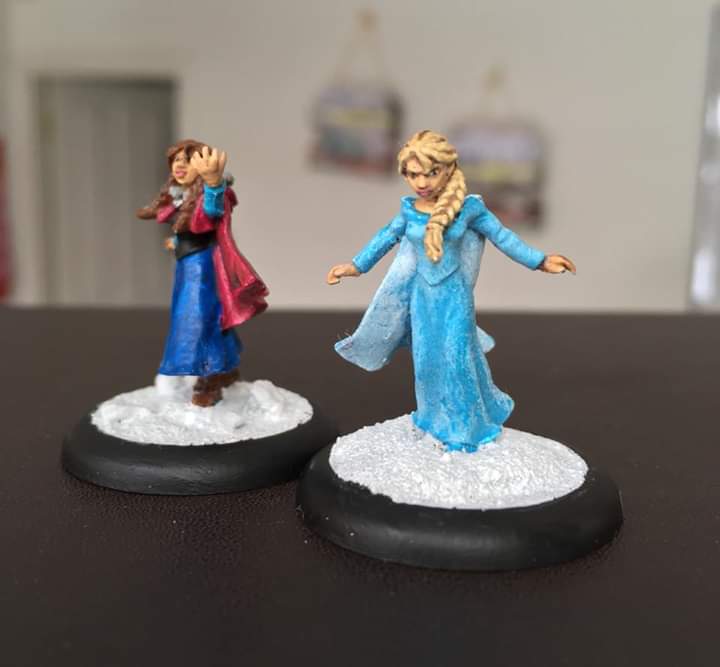 You might recognise these two, as I painted them a couple of years ago. However, time spent in the possession of a small child has meant that there were some chips to repaint, as well as a base for the Ice Queen and a new hand for Miss Feisty-Pants.
The miniatures are from North Star, as part of their Frostgrave range - labelled as a Fire Elementalist and her Apprentice. For reference, similar characters are available from Hasslefree. 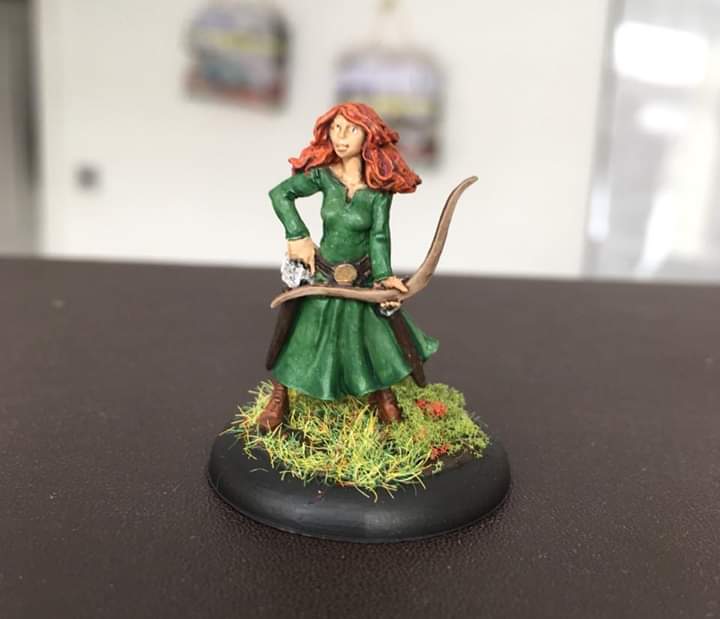 Speaking of Hasslefree, this brave lass is from them, and was a really straightforward paint job. I’m a bit disappointed with her eyes, which look fine in real life, but the photo reveals to be a bit boss-eyed. 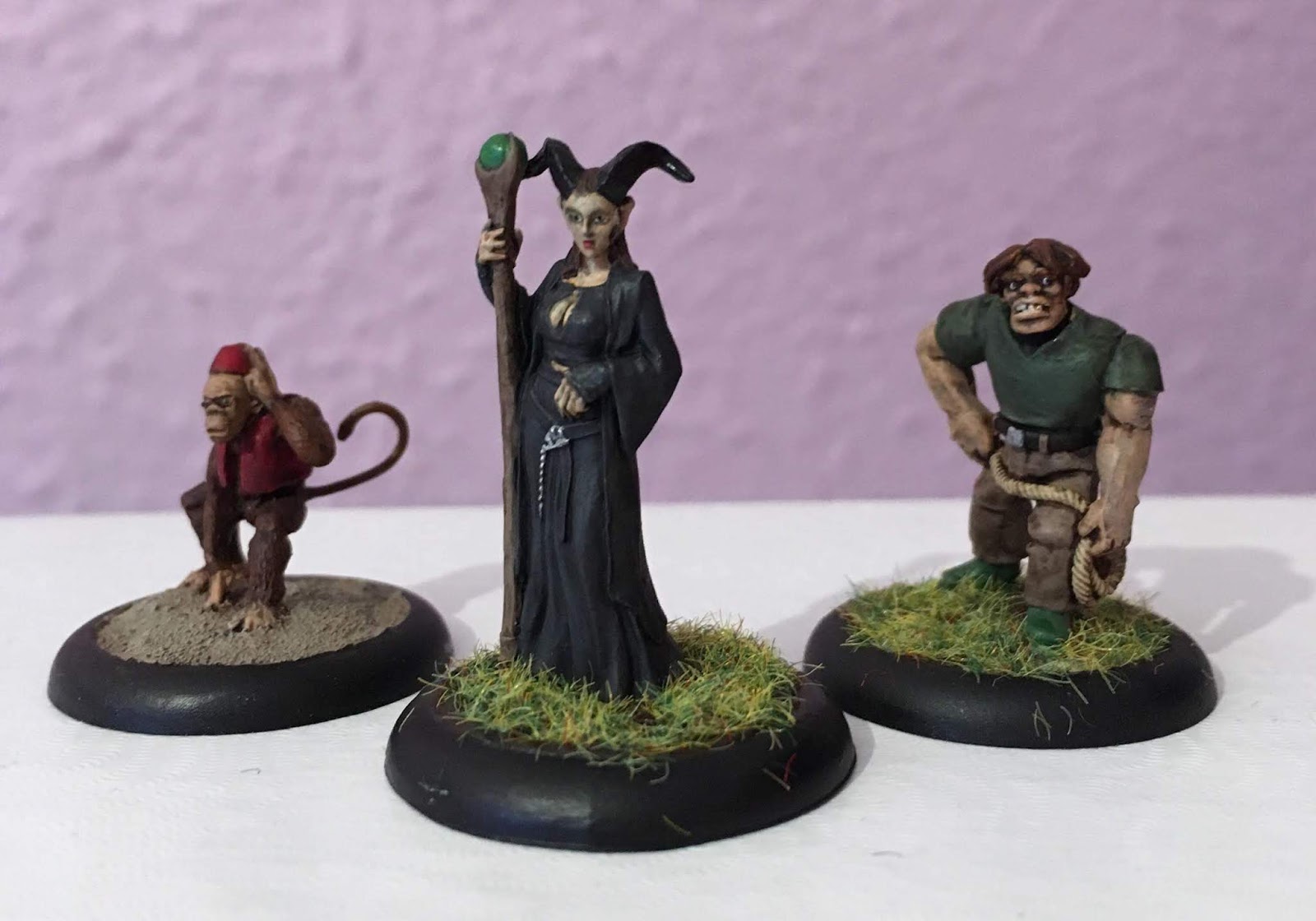 Also from Hasslefree is the evil fairy, currently the sole representative from the forces of wickedness. The sculpt is clearly based on the live-action iteration of the character, but I’ve tried to do a more traditional outfit.
Amusingly, I think the face makes it look like she’s being played by Maisie Williams from Game of Thrones.
The humpbacked bell-ringer is from Pulp Miniatures, and despite being dressed a bit too modern for the medieval setting of the subject character, the overall resemblance was too good to pass up (also, I already had the model).
I built up the hump with greenstuff to make the resemblance more obvious.
The cheeky monkey comes in the same pack as the previous miniature, but needed a tail adding to make him suitable to represent a flying carpet co-pilot from the Middle East.
I’m genuinely not happy with the final look of the face of this chap, and so I might need to go back to it. I think the problem is that he’s designed as a villainous henchman, and so there’s a sly look to the face that’s difficult to make look friendly. 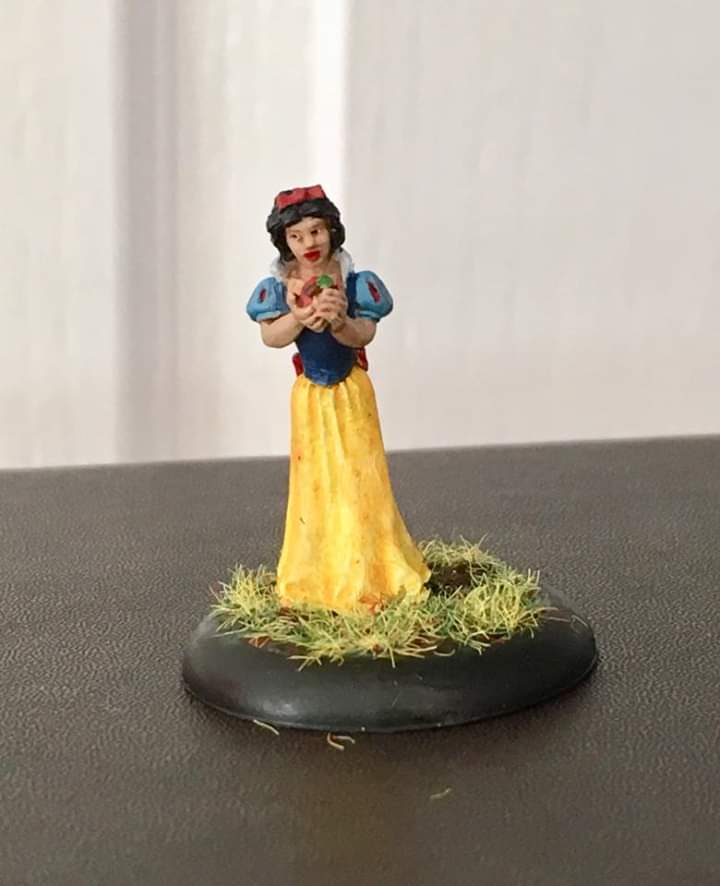 This character, photographed amongst the white snow, is the Baron’s Daughter from White Knight Miniatures. I’m a little bit disappointed with the tidiness of my painting but the bright colours make it quite hard to cover up by throwing a wash over the model...as I usually do.
I may revisit this one.
I’m now on the lookout for some more appropriate miniatures, particularly to represent some villains. I have already been ‘hooked’  by some pirates from North Star, which include a fellow who might make a suitable Captain.
Cards will follow when I’ve evened out the bad guys’ numbers.
Posted by Kieron at 06:54