“What, do you guys come off an assembly line or something?”

Another batch of Resistance soldiers for Terminator; Genysis, and this time, in the full spirit of Cheaphammering, they’ve been co-opted from Mars Attacks by Mantic Games. 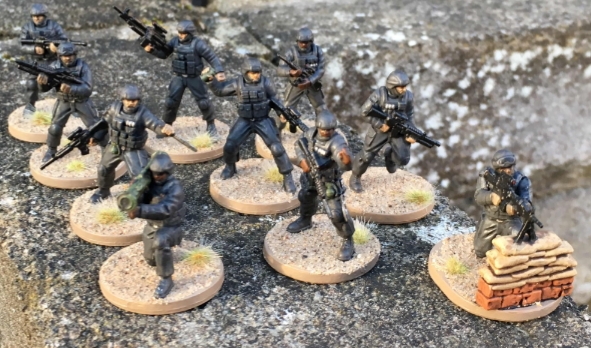 I picked up Mars Attacks cheaply a couple of years ago, with the intention of using the scenery and miniatures for zombie games and 7TV. Unfortunately, the single piece miniatures are a bit slender and small to fit in with most 28mm ranges. Fortunately, so are the Terminator; Genysis miniatures.

The miniatures are more individual than the Terminator Resistance models and so add some much needed variety to the force. The bases and uniforms are slightly different but not worryingly so. In fact, the only major downside is that most of them are armed with assault rifles, which are largely useless against Endoskeletons. Weight of fire is their only hope of slowing the machines down.

Fortunately, these troops also give me access to light machine guns, something that I’ve not had access to previously, partly due to the fact they’re not in the main rulebook. However, and errata has fixed that and so I’ll be able to add massed firepower at range to hold the terminators at bay.

The set also includes a missile launcher. Unfortunately, I can’t technically add a third until I bring my force up to 750 points.

At the moment, I’m currently only at 500 points, however events have taken place that mean that reaching that next benchmark might be easier than I first thought.

This also means that I get to start adding fun stuff to the machines, and I have plans for that too.