So, it’s time for the gang to leave Atlanta, but there’s a herd of Walkers determined to stop them. This was (or so I thought) going to be a big game featuring 13 characters, but would also involve both risks and rewards for the future of the campaign.

In the comics (spoiler alert) this encounter sees the death of Amy and the infection (and ultimately death) of Jim. Therefore, there was the chance that both of these characters could survive and be available later in the campaign. As ever, characters who died would be gone for good, and infected characters that survived to the end of the game would turn out not to have actually been bitten.

However, it is possible to not win the scenario due to not gaining enough victory points, and in this circumstance I would face the following penalties:
So let’s see how I got on...

Despite Shane’s opposition, Rick persuades the others that they have to keep moving to stay alive. Unfortunately, the RV needs major repairs before they can pack up camp. While they’re working on repairing the transport, a herd of roamers emerges from the woods... 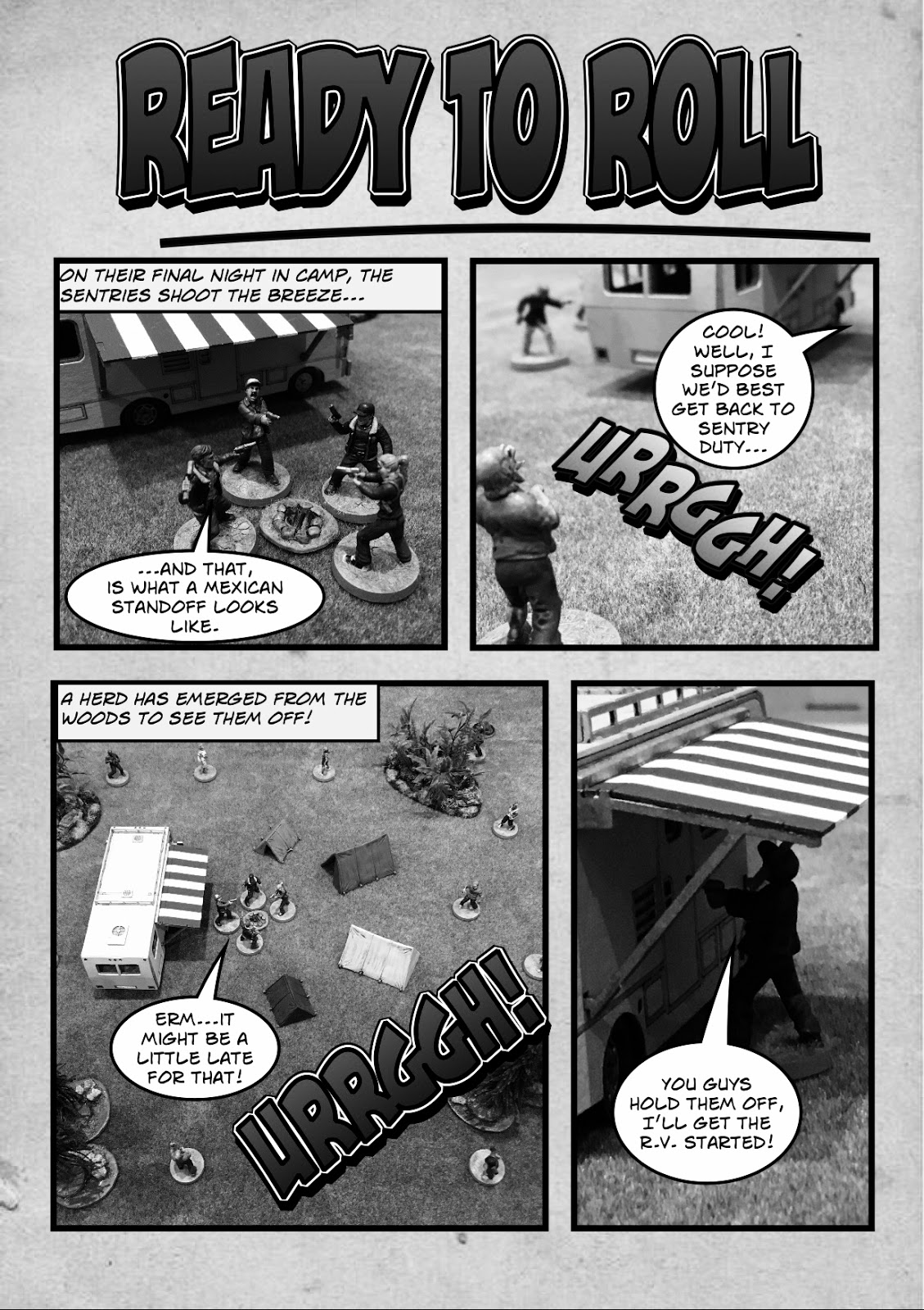 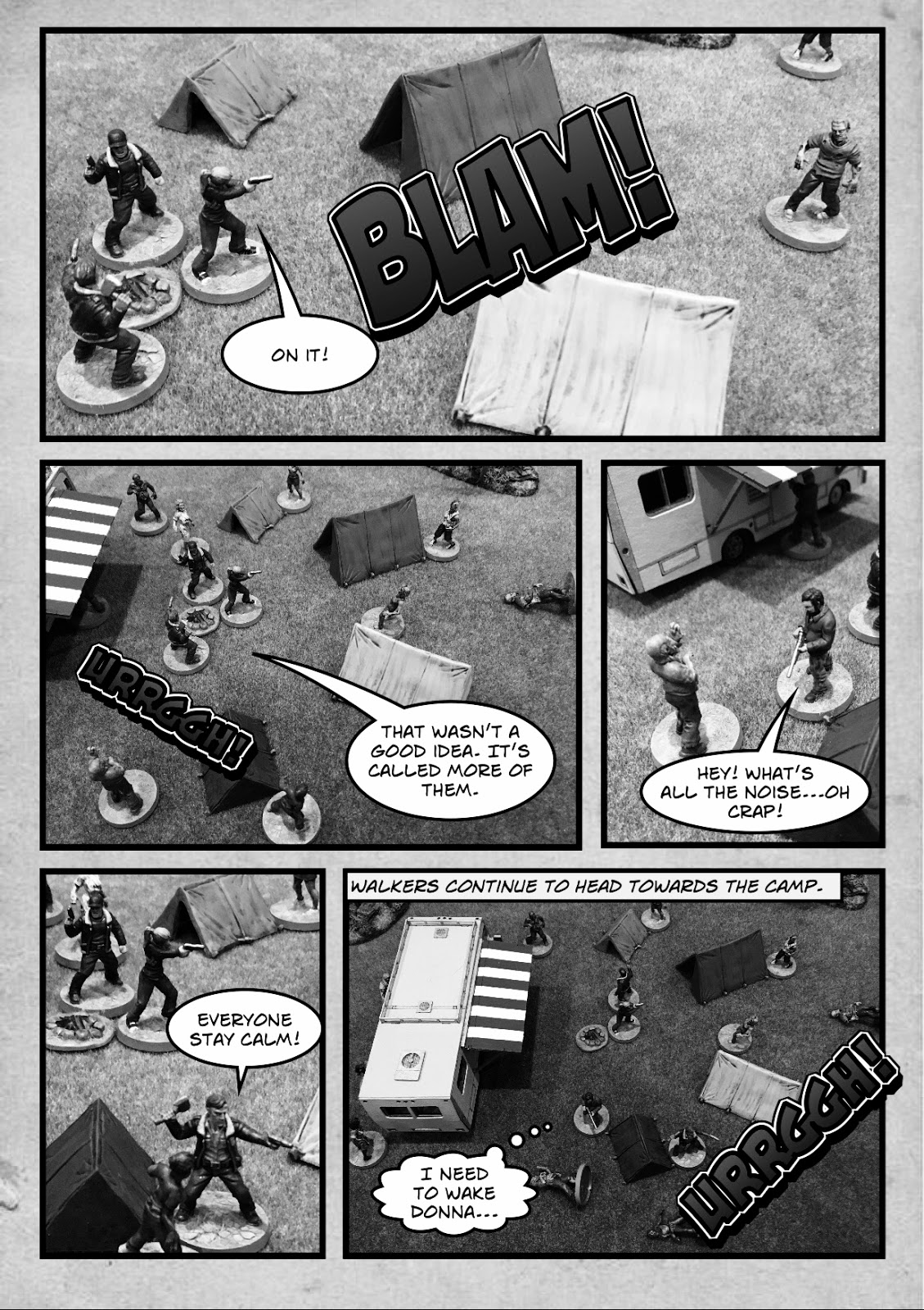 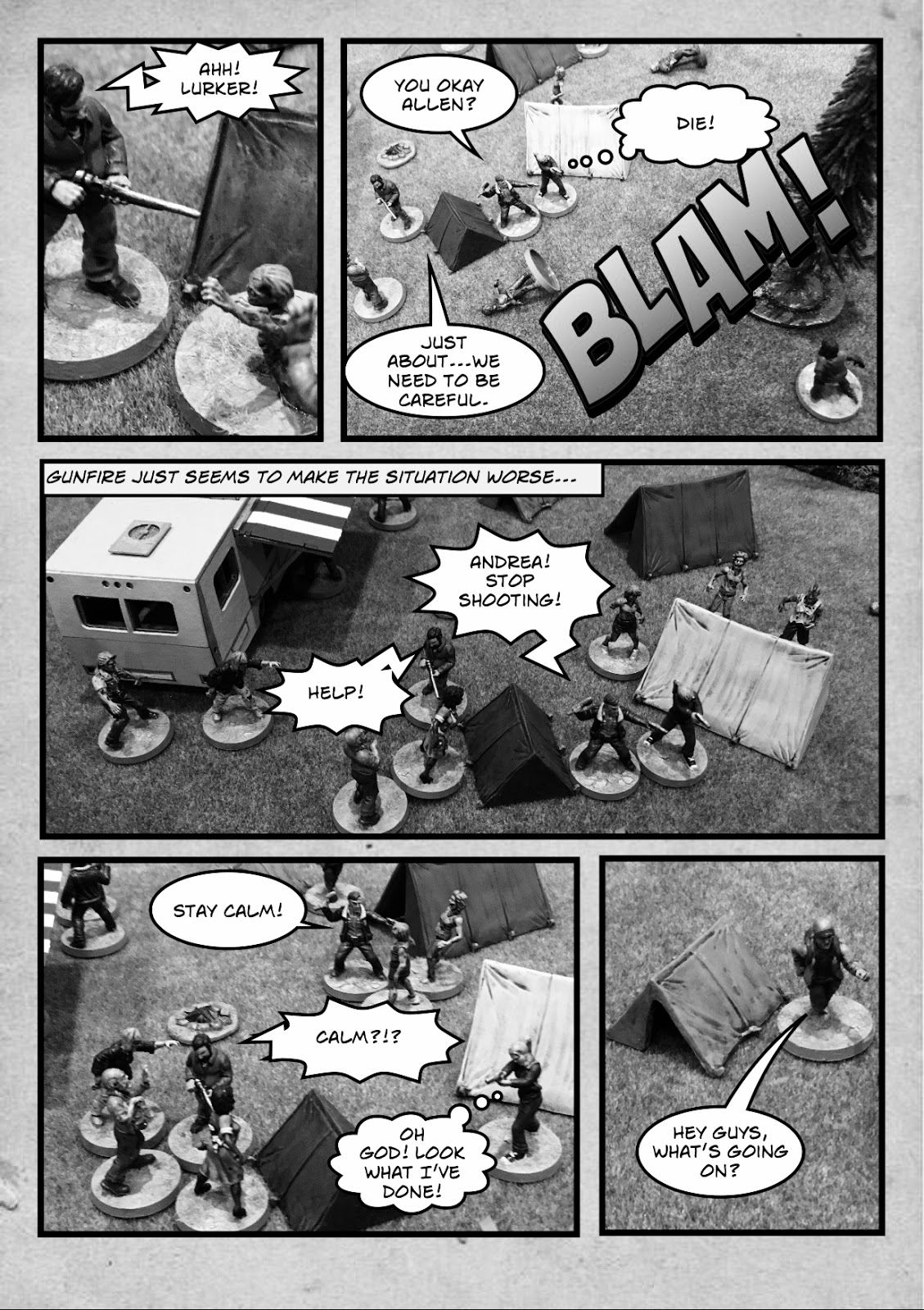 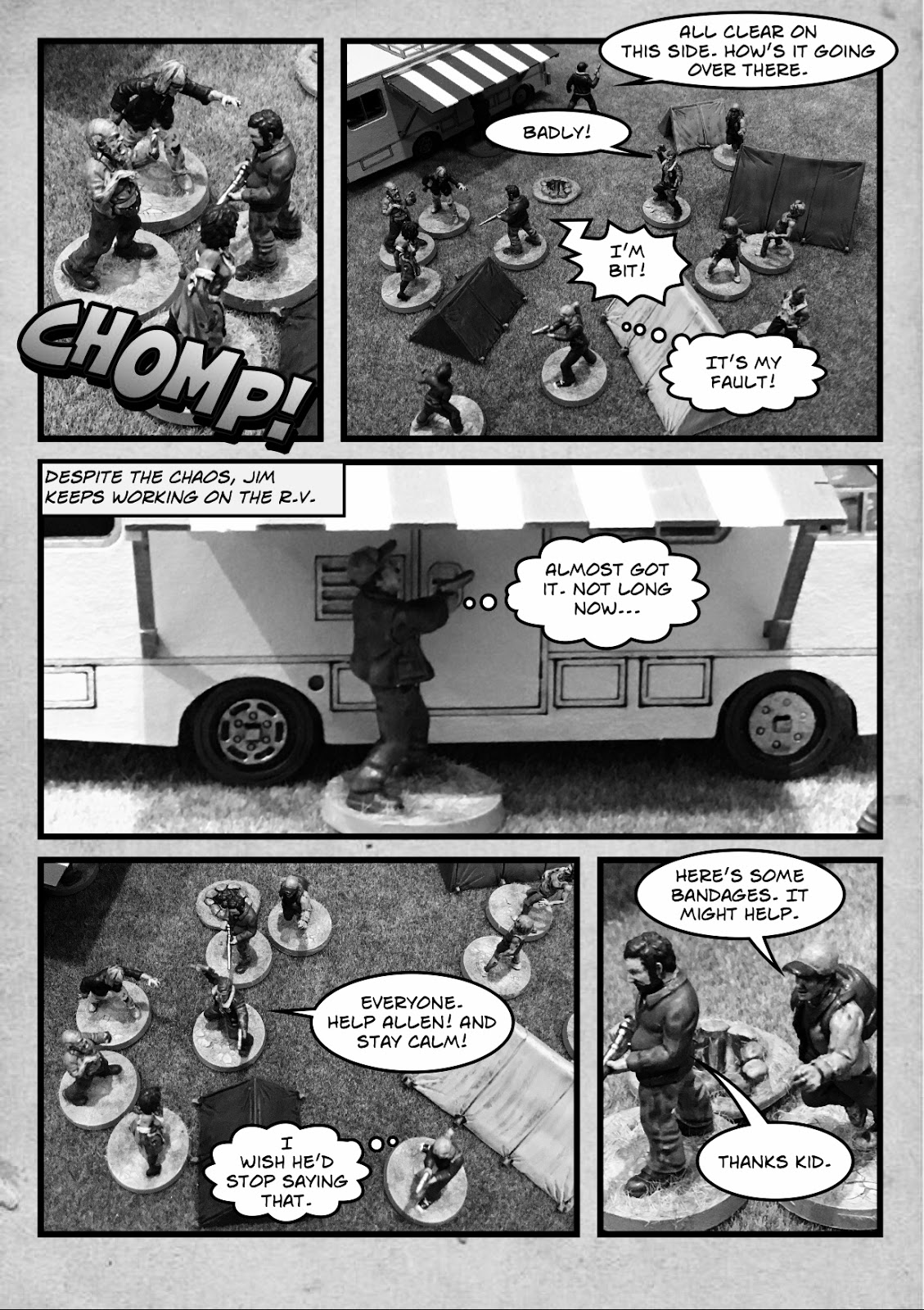 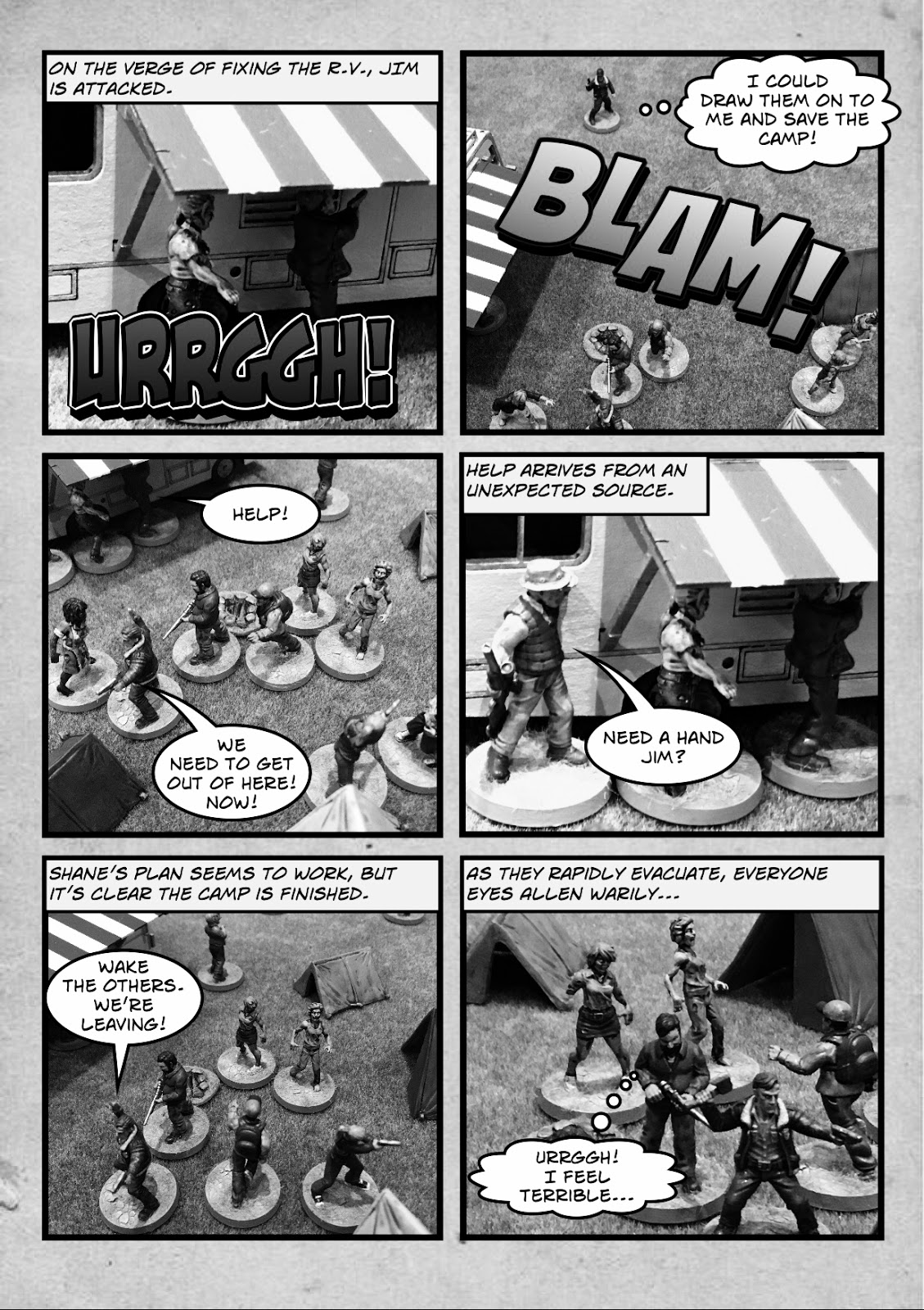 The game only actually only lasted three turns due to me not remembering that a Walker getting within 3” of the campfire in the End Phase would end the game and being somewhat trigger happy with Andrea in the opening turns, thus overrunning myself.

I probably should have focused on melee weapons and cleared out the Walkers who got close whilst Jim fixed the RV. This is especially annoying because Jim, armed with the wrench is pretty much a dead cert to fix the RV in four rounds.

To add insult to injury, Allen, who had already survived a lurker, was bitten when overwhelmed by the Walkers drawn to Andrea’s gunfire. According to my own rules, I failed to get the 5 VPs required for victory, and that means that both Allen and Jim end up succumbing to their woulds and joining the Walkers.

On the up side, Amy survived. However, she’s not as good as Allen, and given that Allen makes it all the way to the prison, there are a number of scenarios where I’m going to have to put Amy, or one of the other weaker characters in harm’s way in his place.

In terms of narrative, it works out. Andrea is consumed by guilt for Allen’s death (instead of Amy’s), both Allen and Jim will be left on the outskirts of Atlanta, with a tearful farewell between Allen and his wife Donna, and there has been a serious consequence to Shane’s insistence of staying near Atlanta, further driving a wedge between him and Rick.

And on that subject, the next scenario actually requires an opponent. Shane and Rick will go head to head, and one of them isn’t walking away...well, not until after they’re dead.
Posted by Kieron at 07:58