After my initial, and enjoyable, foray into Super Mission Force, I’ve suddenly got all enthused about Supers gaming again, and that enthusiasm has brought with it  a flurry of activity.
Firstly, I have created character cards for my entire collection of Marvel characters (barring the KM models as they’re a different scale), which turned out to be both faster (character creation in SMF is a doddle) and slower (I’m indecisive) that I expected.
Secondly, I’ve decided to run a solo campaign and so I’ve been doing so research. Inspiration has come from The Angry Piper’s blog, Dead Dick’s Tavern (see the Blogs I Follow sidebar), where he has based miniatures campaigns on RPG modules. This is something I intend to do...more on that in future posts.
Thirdly, to facilitate this campaign, I’ve set about painting up a few characters needed for the scenarios. Count Nefaria, Mentallo and your freindly neighbourhood web-slinging amazing Spider-Man.

All three are Heroclix Miniatures that I’ve had for some time and needed rebasing and their sweatshop paint jobs tidying up.

Actually, for Mentallo, I needed to do nothing else. He’s actually been stood on my painting desk for over a year...awaiting static grass. No, I don’t know why it took so long.
Mentallo is a mentallist (you’d never guess, would you?) who has worked with numerous organisations in the Marvel universe, including A.I.M., S.H.I.E.L.D. and notably HYDRA, and so he will join Red Skull, Silver Samurai and the goons in their nefarious schemes.
Count Nefaria is a character I’d never come across prior to reading the RPG scenario, and so he’s not really a character I was that fussed about spending money on. Therefore I’ve converted him from a Clayface (yes, the Batman villain...there’s a version with a cape) Clix. A head swap and a repaint have delivered something close enough to Count Nefaria for my purposes, despite not having the big collar. 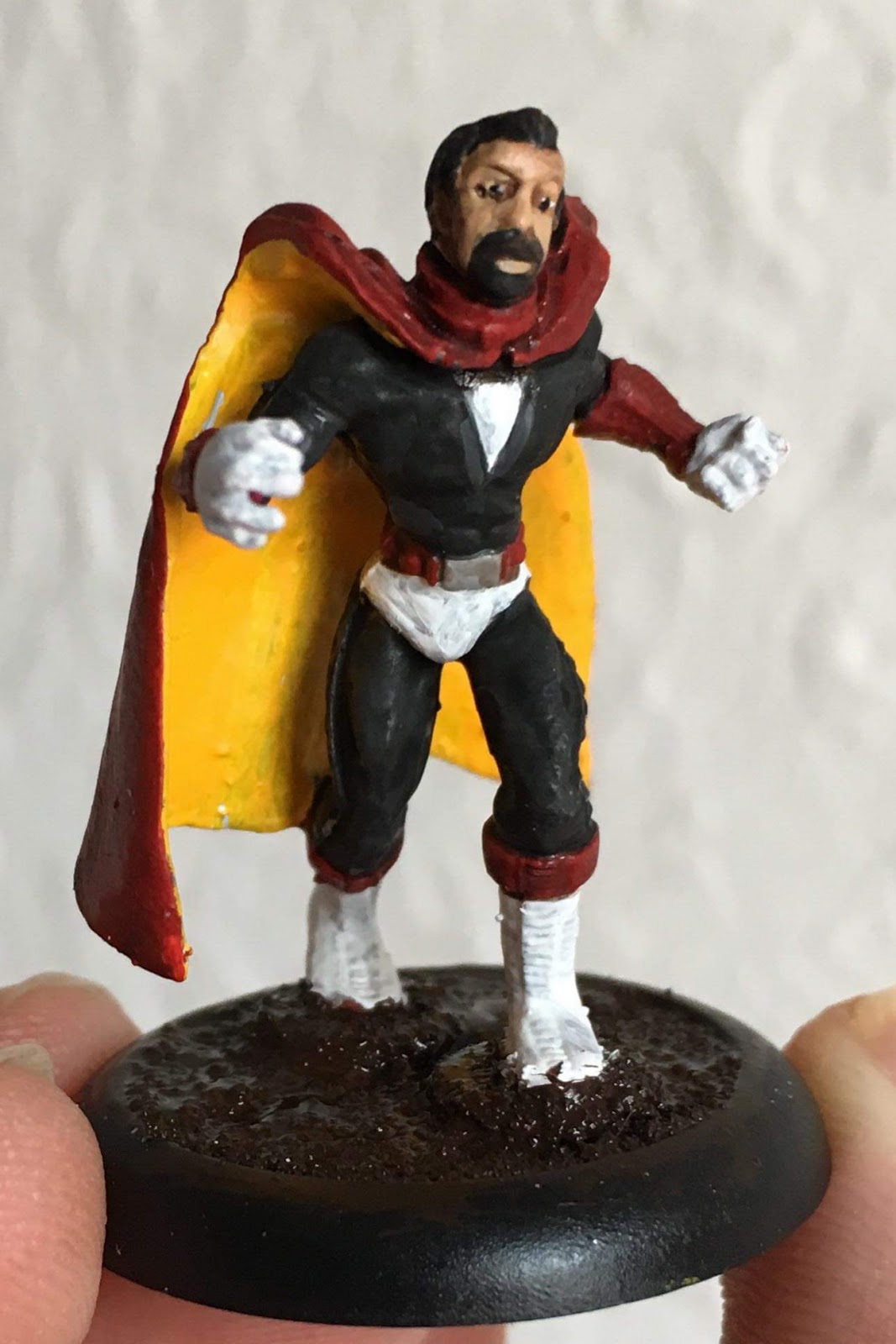 In terms of SMF, Count Nefaria will be a Powerhouse, merging the abilities of the Brick (super strong and tough) and probably the Wildcard (a mix of abilities) as he’s somewhat of an evil Superman analogue. He will present a significant threat to the heroes.

Spider-Man is the last of the heroes I need for the first stage of my campaign (the others being Captain America, Iron Man, Luke Cage, Spider-Woman and Daredevil), and he will probably be a Super Wildcard with his eclectic mix of abilities. 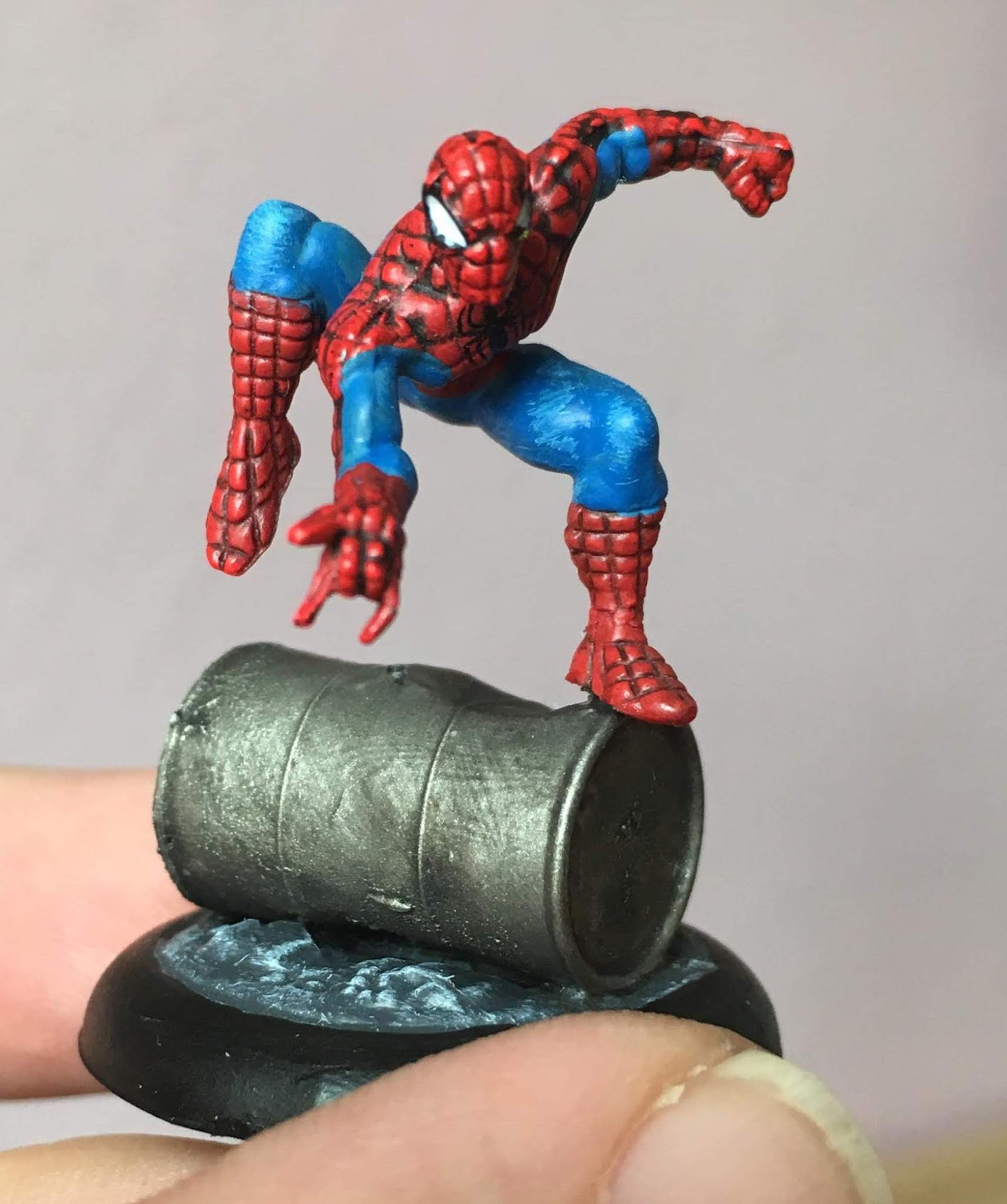 I was fortunate with this miniature, as it’s not only an interesting and dynamic pose, but also was sporting a pretty decent paint job, which was fortunate, as the idea of painting that webbing terrified me. All I needed to do was tidy up the edges of the red bits, and re-do the blue, including some highlighting.
The basing was required as the original model was posed on a translucent pole. Thankfully, due to their weight, Heroclix are really easy to pin in place and I have resin oils drums lying around...as you do.
With the lack of real work this required, I’m really pleased with how he turned out, as Spider-Man is one of those characters I can see myself using a lot.
Although I now have almost all of the essential features of the initial stages of the campaign, are still are a few more villains I’d like to convert, however, the campaign might kick off fairly soon.
Posted by Kieron at 02:59