At last we come to the final post of 2018, and it’s a big one. Later on I’ll take a look back on how I did with my targets for the year and I’ll be setting new gaming resolutions.
But first it’s time for our Christmas big game...and this year we went BIG!

We decided to make full use of Pete’s 8’x4’ table and fill it with a massive game of Bolt Action. To add to the size we broke out our underused 15mm Flames of War armies and play the Tank War variation of Bolt Action in a scenario very loosely based on the Battle of Berlin.
If you are a historian or know a little about tank warfare, please look away now.

Even with mainly tanks, when armies reach almost 10000 points, there ends up it being much space to deploy in. Pete and Wes were the Russians and fielded an army of around 50 armoured vehicles including 20 T-34s. Matt and I met them in battle with a mixed array of units (we had to stretch to meet the points value) but it was centred around 2 Tigers and 11 Panthers, although these were affected by low fuel.
The aim of the game was simply to wipe each other out.

The early parts of each turn were dominated by the rockets of the Katyusha and Stuka Zu Fuss laying own massive barrages that tried to pin and destroy as much as they could. In fact to combination of rocket fire and just sheer volume saw the German lines prevented from firing for some of the early turns of the game.

However, the size of the German guns did cause significant damage when they were able to put a salvo together as we had something in the region of 25 heavy or super-heavy AT guns pointed at a force mainly made up of medium tanks.

The sheer volume of Russian tanks was daunting though, and although they often struggled to penetrate the heavy German armour that the Tiger Fear rule forced them to target, there were several Panthers that were pinned out of the game by weight of fire.
Quantity does indeed have a quality of its own. 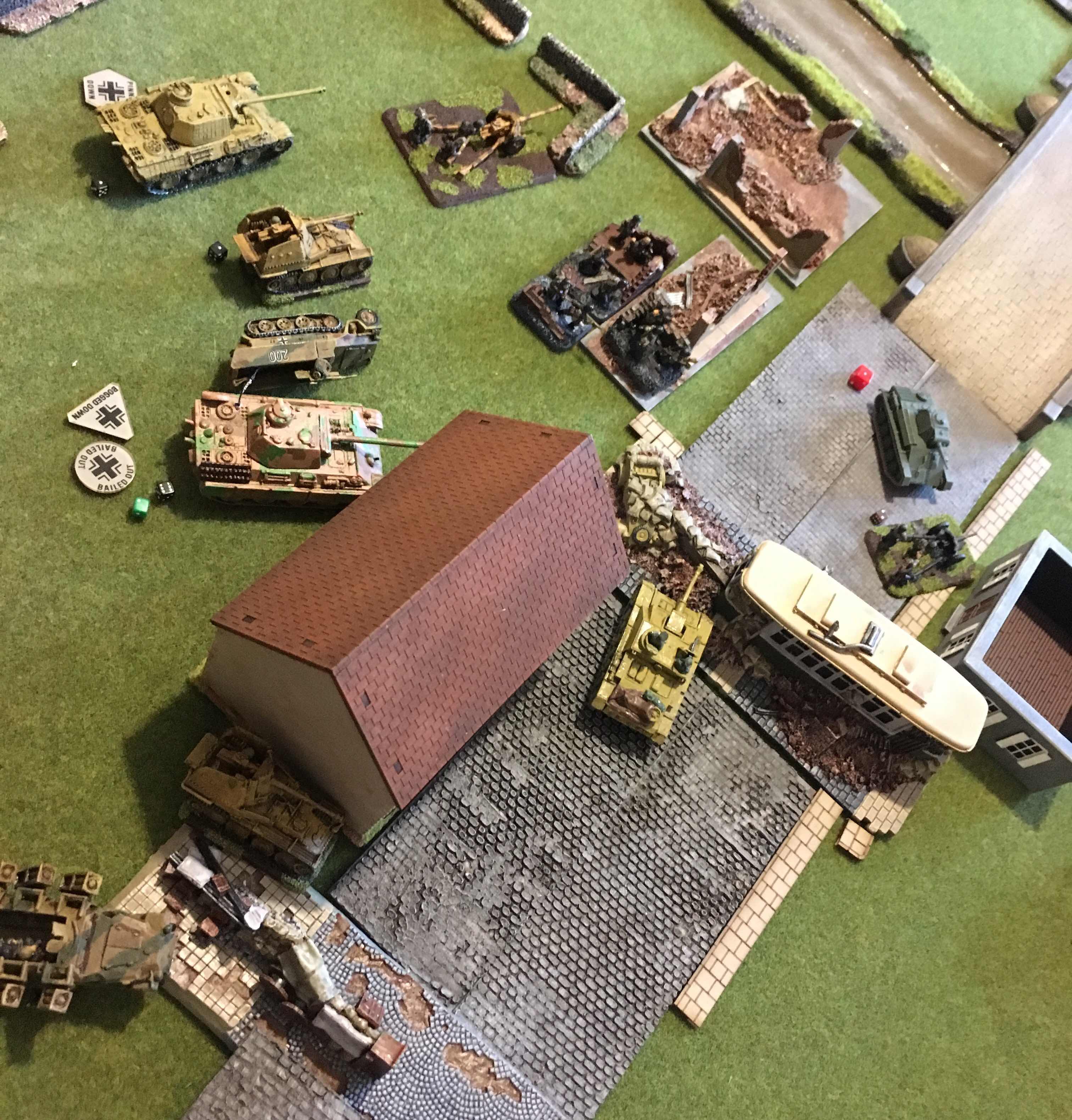 Actually, the combined effects of low fuel, Tiger Fear and lots of pins led to a fairly static game, as to a large extent to lines of tanks pounded each other into dust.

The second turn saw Matt and I bickering over who would get to inform the Fuhrer of our defeat, as pins and a series of glancing hits caused many of our tanks to be unable to fire and it looked like were were about to get swamped.
However, a very effective barrage from a Stuka Zu Fuss at the start of Turn 3 almost single-handedly stemmed the Soviet advance on our right flank and bought us some breathing space. 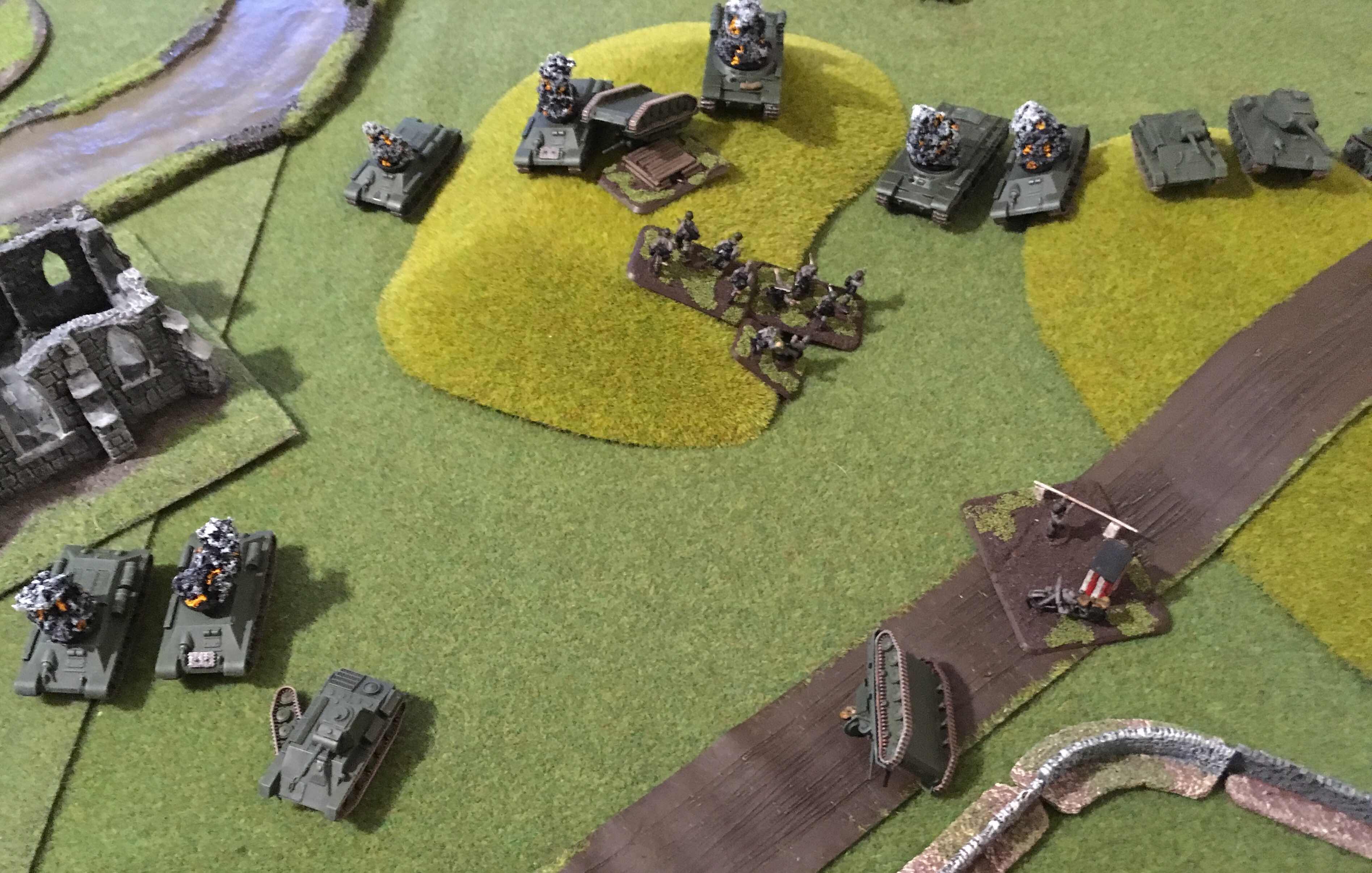 And that’s when our big guns went to work, creating a tank graveyard in the grounds of the ruined church. They were aided and abetted by my favourite unit of the game, an infantry unit that in desperation had fired three of its Panzerfaust to knock out a T-34 on turn two, used its final one to finish off a T-70 on turn 3, and by the end of the game on turn five was advancing through the burning hulks to pepper a Katyusha with rifle fire. 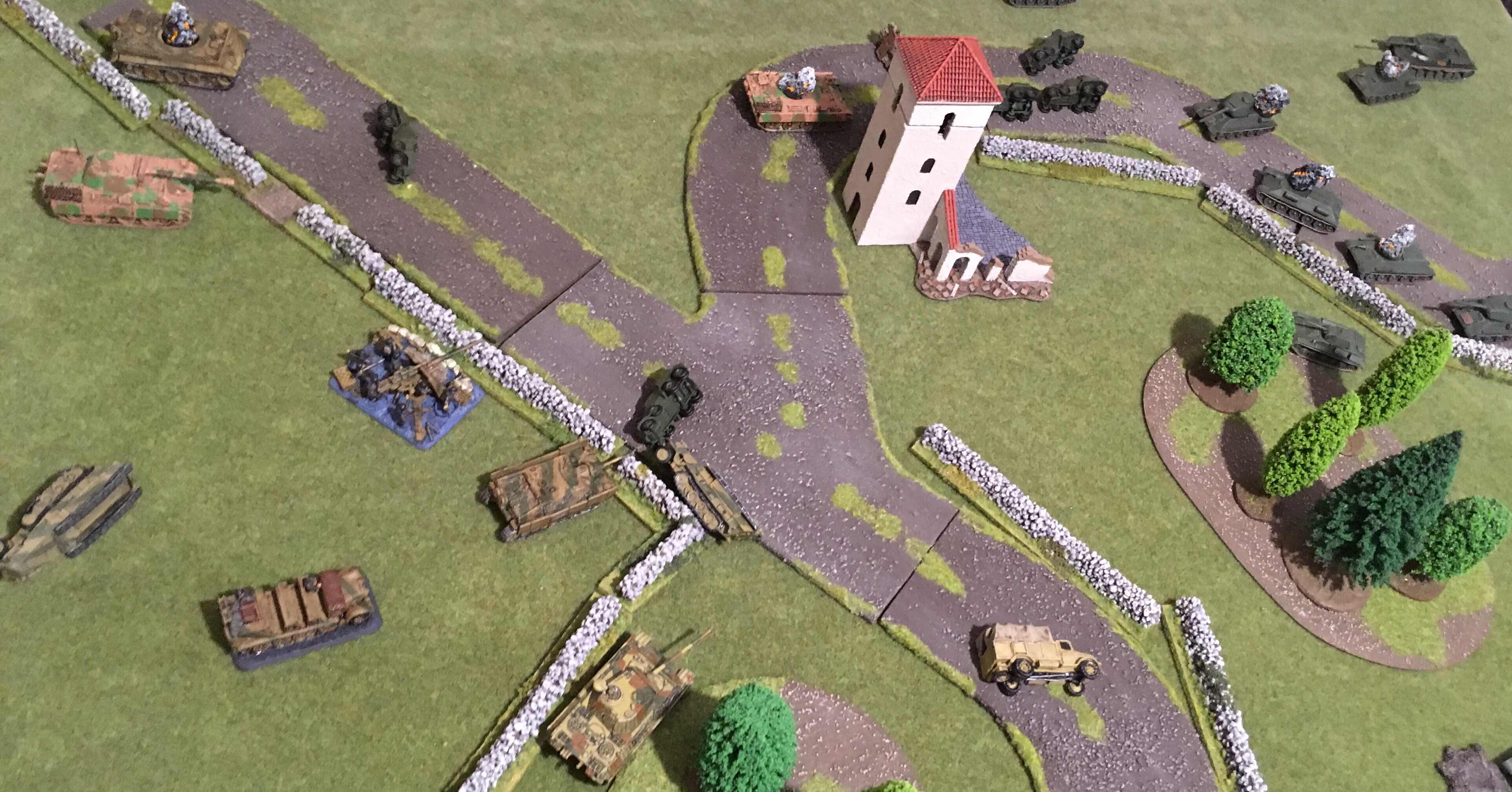 Over on the other flank the Russian tide had been turned back, although we had needed to divert some resources from the centre due to some heavy losses early on, including a Tiger on turn one.
This flank had seen some audacious attacks by Soviet armoured cars trying to get their light AT guns into our weaker side armour. However, this wasn’t enough and the Panther took their toll.

In the centre, there was very little left by the end of the game, however the towed AT guns Matt and I had needed to use to build our points had held the line, including a tiny PaK 36 (by the bridge) which had manfully withstood several T-70s.
By the end of the day it was clear that neither side was going to destroy each other, and so we determined victory with destroyed units. The final tally was 24-18 to the Germans, although we were significantly helped by the same advantage Germans always experience on the Wargames table...no shortage of heavy armour. Our heavy tanks were able to withstand the storm of fire and draw fire away from the lighter, more vulnerable units, and we also had more heavy guns which, when accurate, ripped the lighter Soviet tanks apart.
We were also helped by Pete’s amazing ability to roll a disproportionate amount of ones.
The game was a reminder that, although somewhat overkill, the Tank War variation of Bolt Action works much better in 15mm.
And now it’s time to move on to my review of my wargaming target for the year...

Fail. The only old project I’ve finished off has been the Necromunda Orlocks, which involved about four models. Projects like Dropfleet/Dropzone Commander, War of 1812 and Flames of War Americans remain conspicuously unfinished. Partly this is because we don’t play these games often, but mainly it’s due to my propensity to start new projects.

I‘m calling this one a win.

I’ve made a little bit of terrain and painted a handful of models for pulp gaming, but I’m still some way off a game. The announcement of 7TV Pulp and a Pulp themed event in the summer may significantly help with my productivity in this regard.

The closest I’ve come to this has been starting a Descent campaign which tapered out. Pete and I have begun a series of themed games on the Eastern Front and are prepping for the Invasion of Crete, but this is not what I meant. The problem is that everyone need to be in the same gaming mode at the same time for a period of time, and in reality, this is hard to achieve.

This is a big fat YES! I’ve not only increased in last year (almost doubled it in fact), but I’ve smashed my previous best by over 20 posts. I’ve learned a few tricks to up the post count over the past year, and so although I can’t promise to keep this rate up, I won’t be slipping back to the woeful performance of last year.

Okay, so this one is big. I’ve learned from the Star Wars: Legion debacle that I just don’t have the energy to paint whole armies from scratch any more without a source of external motivation. Combine with that the fact that I’m increasingly getting the rules for all the different games I play confused, and really it just seems wiser to develop what I have.

Yep, that old chestnut. I want to get the projects mentioned above (DFC, DZC, FoW, 1812) to a point where I can leave them be, and maybe add to them in time. Added to those projects are Terminator: Genysis (although there have been recent strides here), The Walking Dead and Batman, all of which have unpainted models clogging up my to do pile. I won’t get all of these done, but I’d like to get two or three cleared.

Given the difficulty of corralling others, it seems better to focus on my solo games for The Walking Dead and Super Mission Force and make time for them. I enjoy playing them and making the comic book reports, so I’d like to do more of it.

4. Paint More Than I Acquire

I’m stealing this target from Matt as I think it really helps with balancing spending. Last year I got a bit profligate with new (miniature heavy) games, Lord of the Rings miniatures and custom made pieces for He-Man. I need more motivation to get things painted, and this should help.

Really, it’s a great game and I should play it more. This year I’ve backed two Kickstarter campaigns, been a playtester, been to one event and developed custom rules for He-Man. With unpainted miniatures for a whole bunch of nostalgic projects sitting in my paint queue, two events pencilled in, and 7TV Apocalypse due in March, there is plenty of opportunity for more games.

So, with resolutions all set, all that remains is to wish you all a happy new year, thanks for following and supporting my endeavours and I’ll see you in 2019.