Having generated and painted everything I needed to play my first game of Five Parsecs From Home, it was time for Dash Halcyon and the crew of The Fortune's Fool to take their first job. 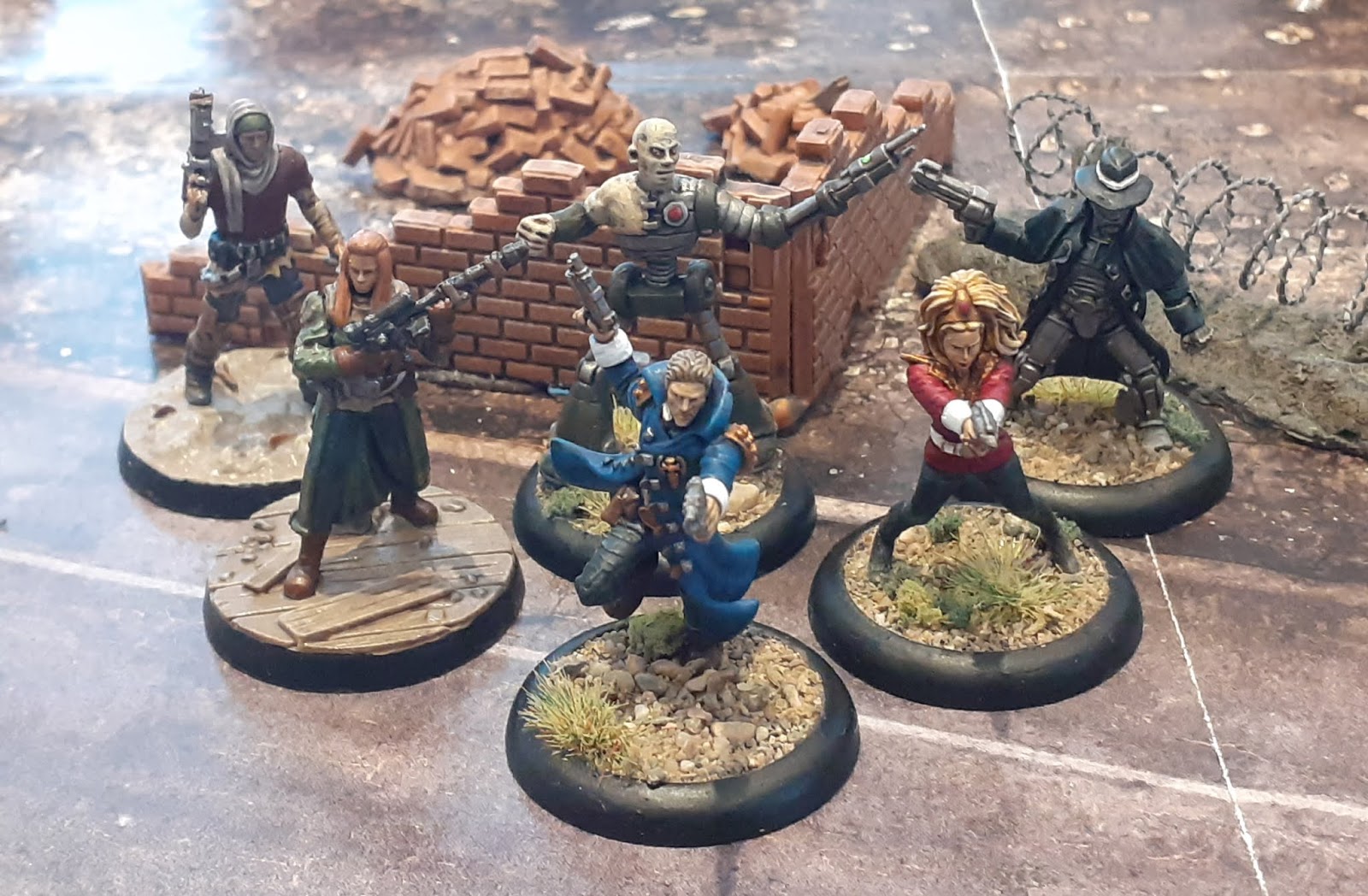 With the ship safely docked in the Axxon Orbital Yards, but his credit line running thin, Dash despatched Clanker and I2 to the markets to see if they could secure anything useful in trade for some spare parts. Noria and Kyla, both enjoying their first taste of freedom, decided to explore, whilst Vidar offered to speak to a Sector Government contact he had called Cran Trillian, to see if there was work available. Dash himself spent time checking over the ship (+1xp).
The Bots returned with a surprisingly good haul: 3 Dazzle Grenades and a ipod, which Fash immediately rigged up to fit Clankers infantry laser.
Noria had here eyes opened, seeing sights she'd only imagined (+2xp), whilst Kyla used her initiative and secured an Auto Rifle from a black market arms dealer. Dash was pleased at the acquisition, but the cost left the crew dangerously short on credits.
Vidar returned with two potential leads. Cran Trillian needed a rowdy group of veteran troopers dealing with, which sounded like a tough job. However, Vidar has also discovered that some of the issues being faced by his mining community might be caused by pirate raids. He'd picked up a lead on a corrupt corporate employee who was passing shipping schedules to the pirates, and he knew where the meeting would take place.
Considering that this was a new crew, Dash made the decision to follow the Vidar's lead on the pirates rather than take on veterans. It would be a bitter struggle, but he knew that bringing in pirates could gain him a good reputation with the corporations of Sera.
Firing up the engines, The Fortune's Fool glided through the atmosphere of the planet to where Vidar said the rendezvous was taking place. Dash landed several miles away and decided to approach on foot, as he didn't want to spook the man they were after.
Turn 1 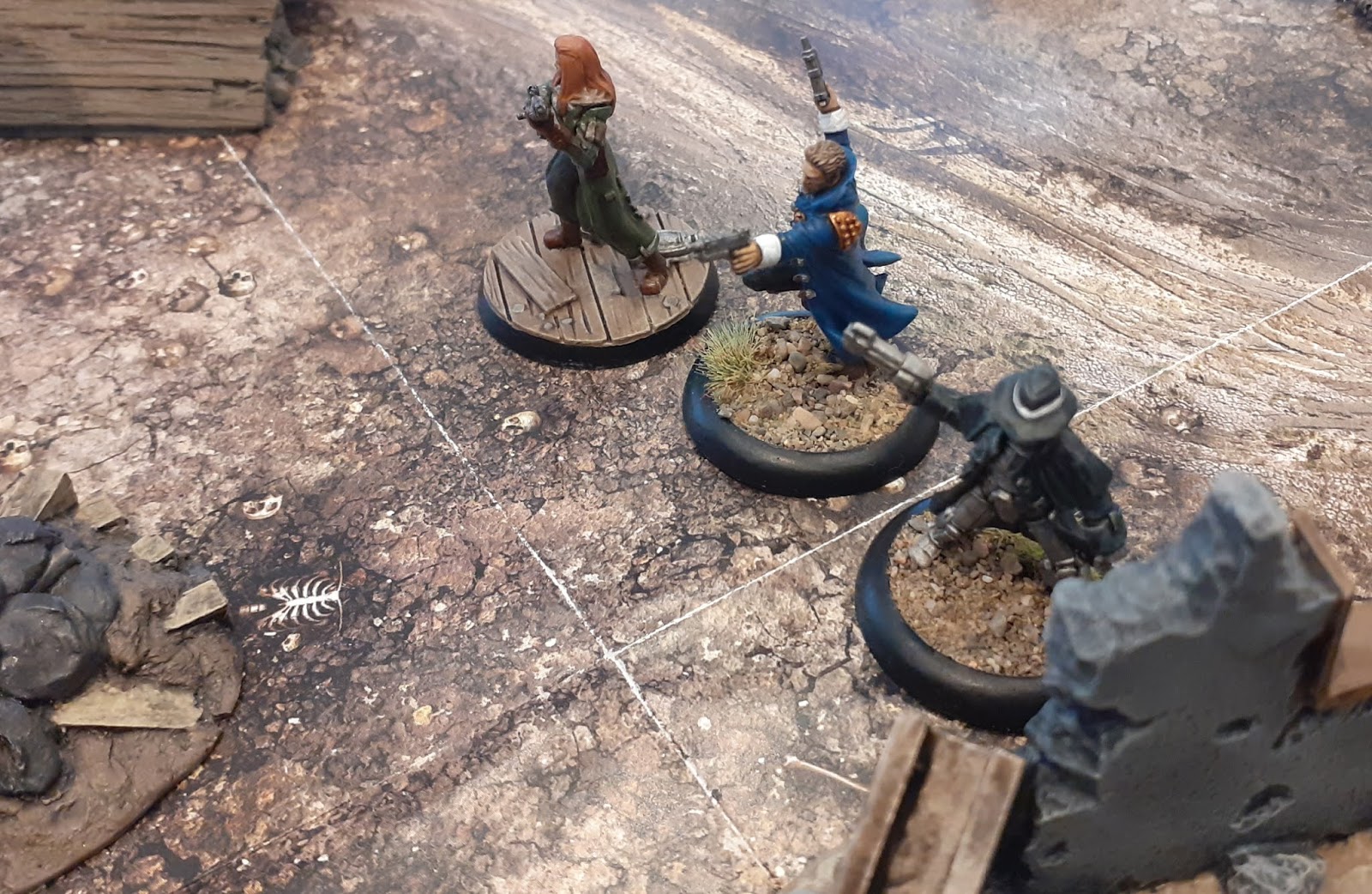 As they approached the rendezvous point, Dash Halcyon ordered his crew to split up and search the abandoned settlement for their target. 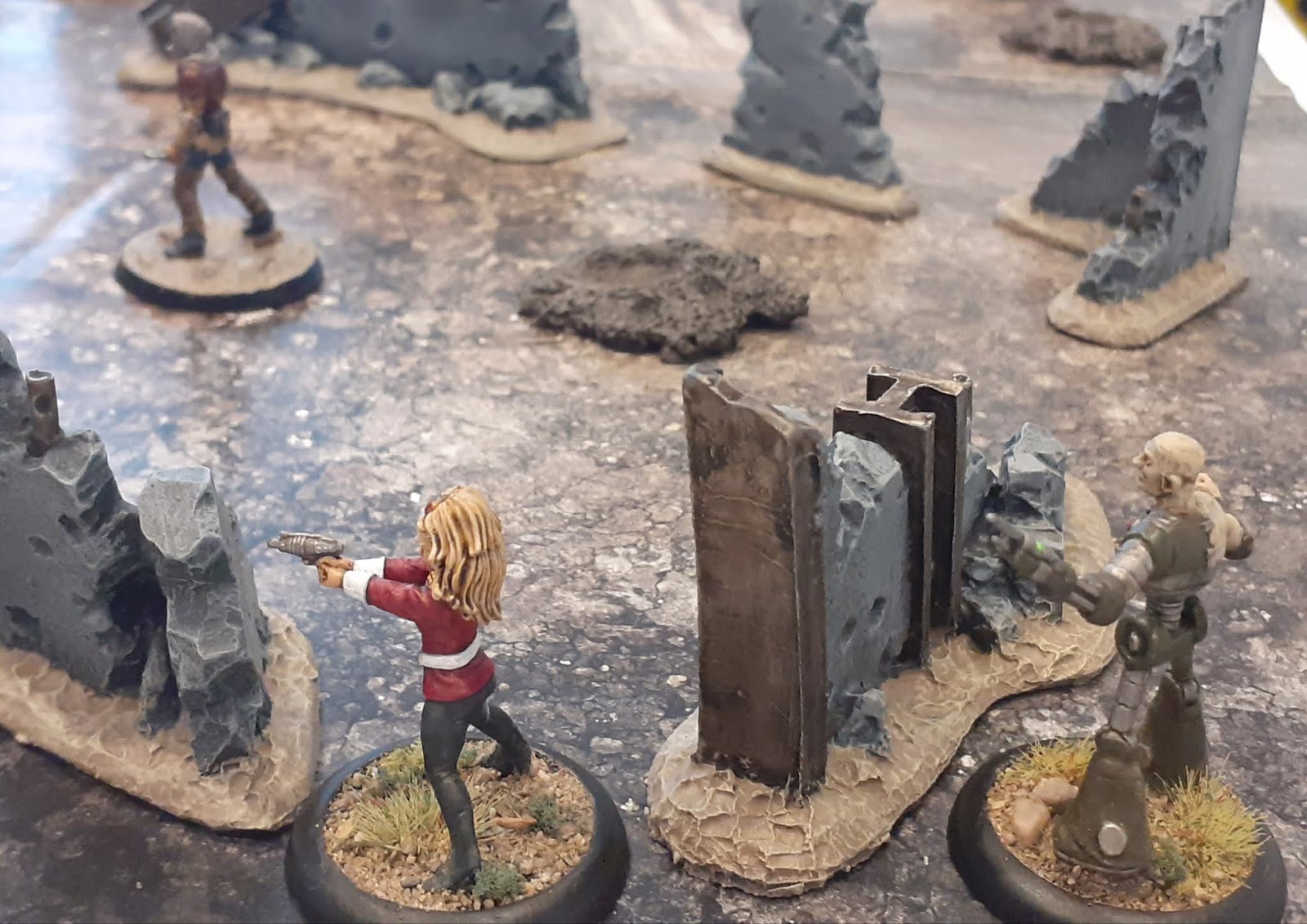 The crew advanced carefully through the wrecked buildings, wondering what had happened to this community. As ever, Clanker took up a covering position with his long range laser. 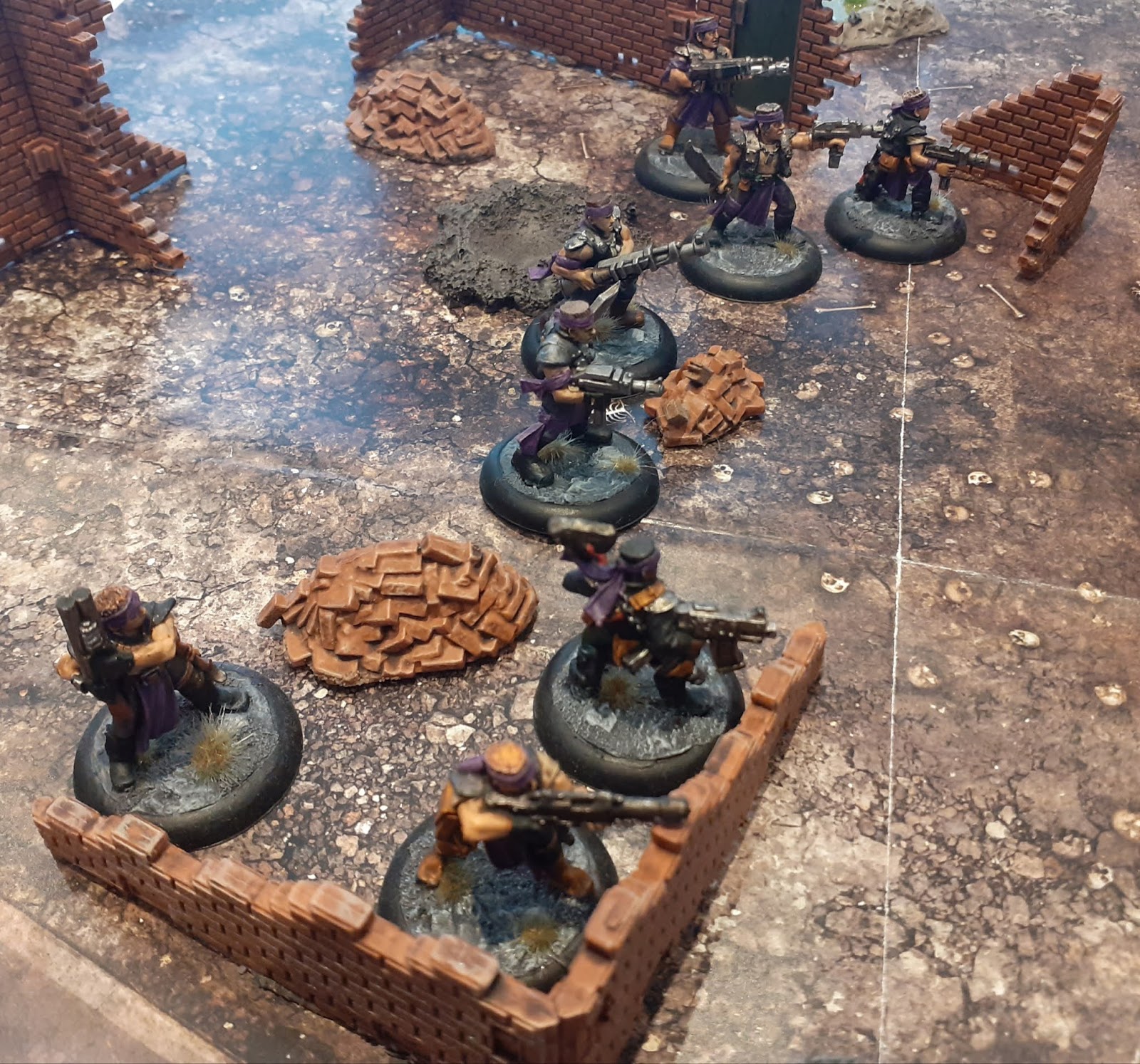 Rowdy noises in the distance indicated that the crew were probably going to have to fight off the pirates if they were to secure their man.

Suddenly Kyla's voice came across the comm, "I have eyes on the target, Captain. Moving in." Dash was pleased with the eagerness of his new recruit. 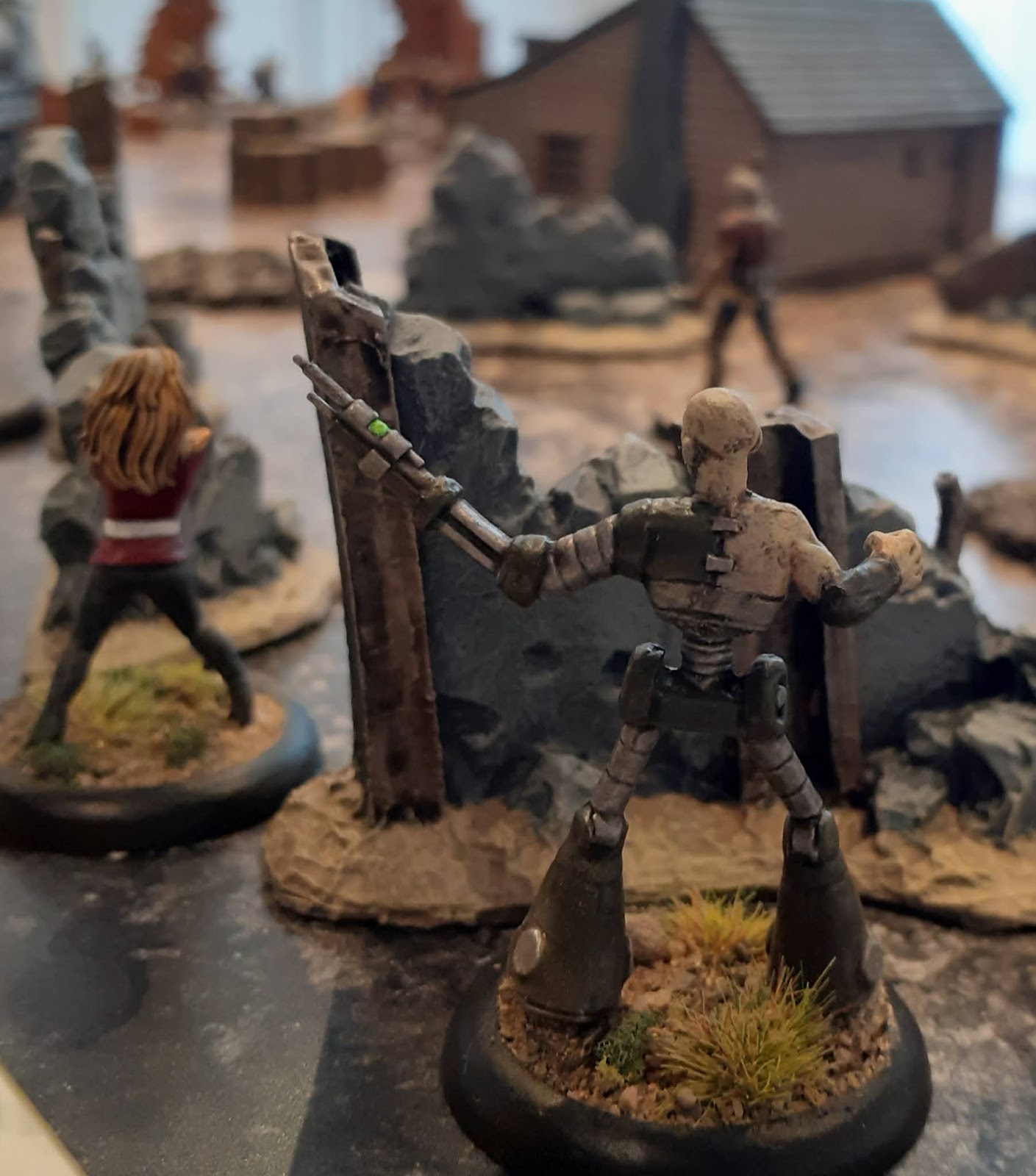 Clanker's aging optics picked out movement in the rubble ahead and he wasted no time in unleashing a well-aimed laser blast, causing one of the figure to drop to the ground in fear. 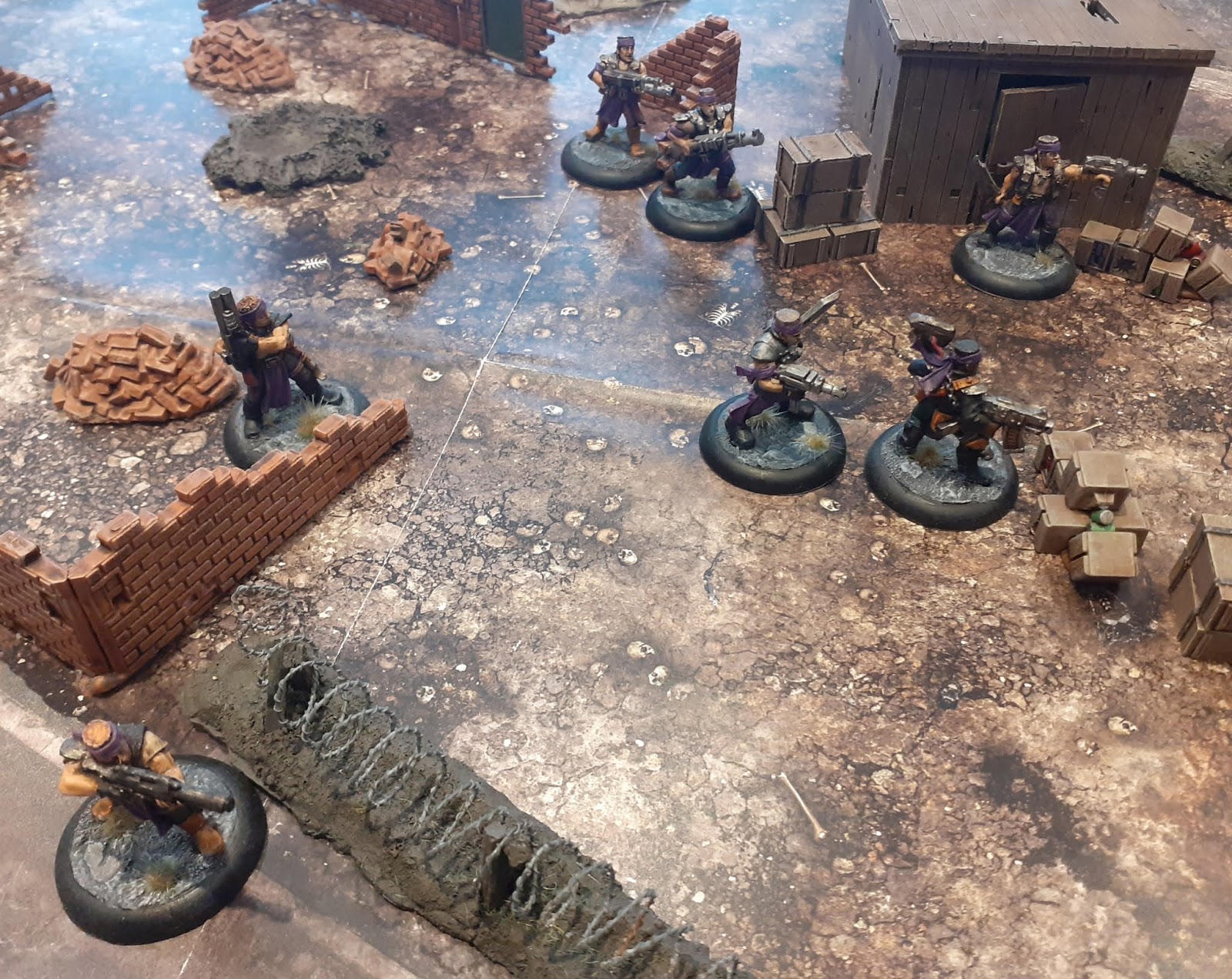 However, the rest of the figures now advanced at pace, spreading out to take advantage of the available cover. 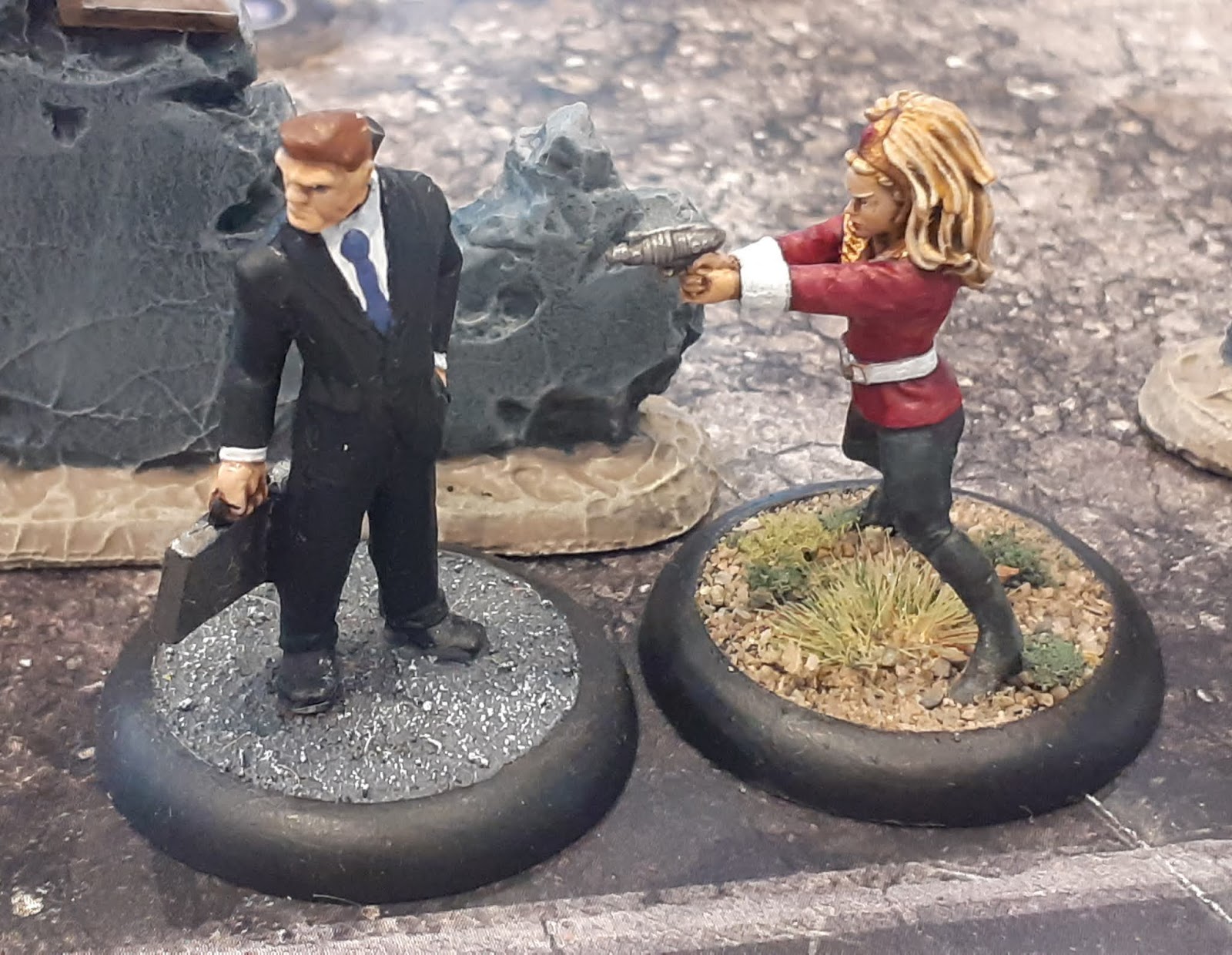 "Don't move, or I'll blow your head off." Kyla quickly secured the prisoner and then checked in over the comm, "Captain, I have him. Can we get out of here?" 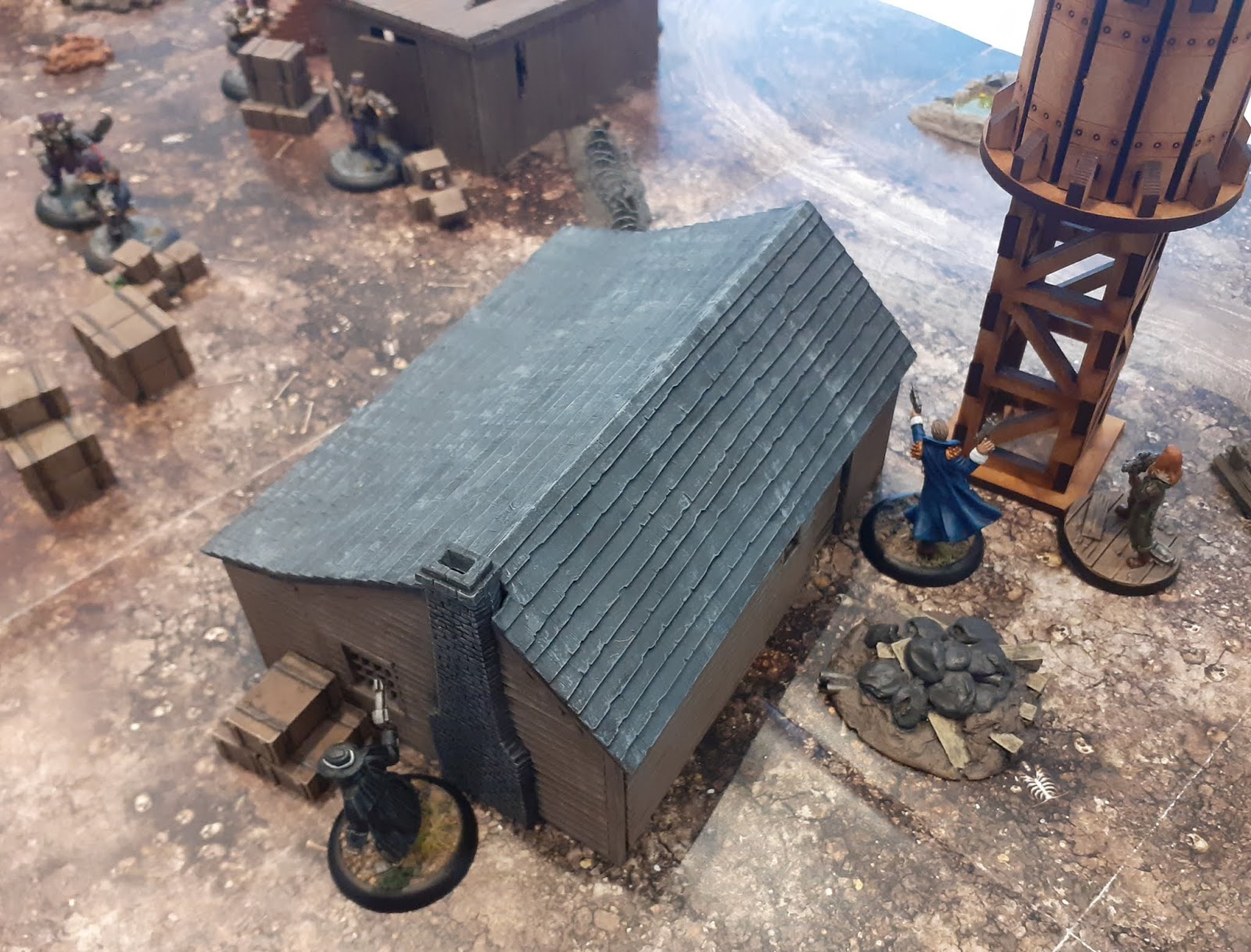 "Not yet Cadet," responded Dash, "we'll need to bloody their noses a bit to put off any pursuit."

Noria opened fire with the new auto-rifle Kyla had bought, causing one of the pirates to shrink back behind some boxes, wary of having his head blasted off.
Turn 2 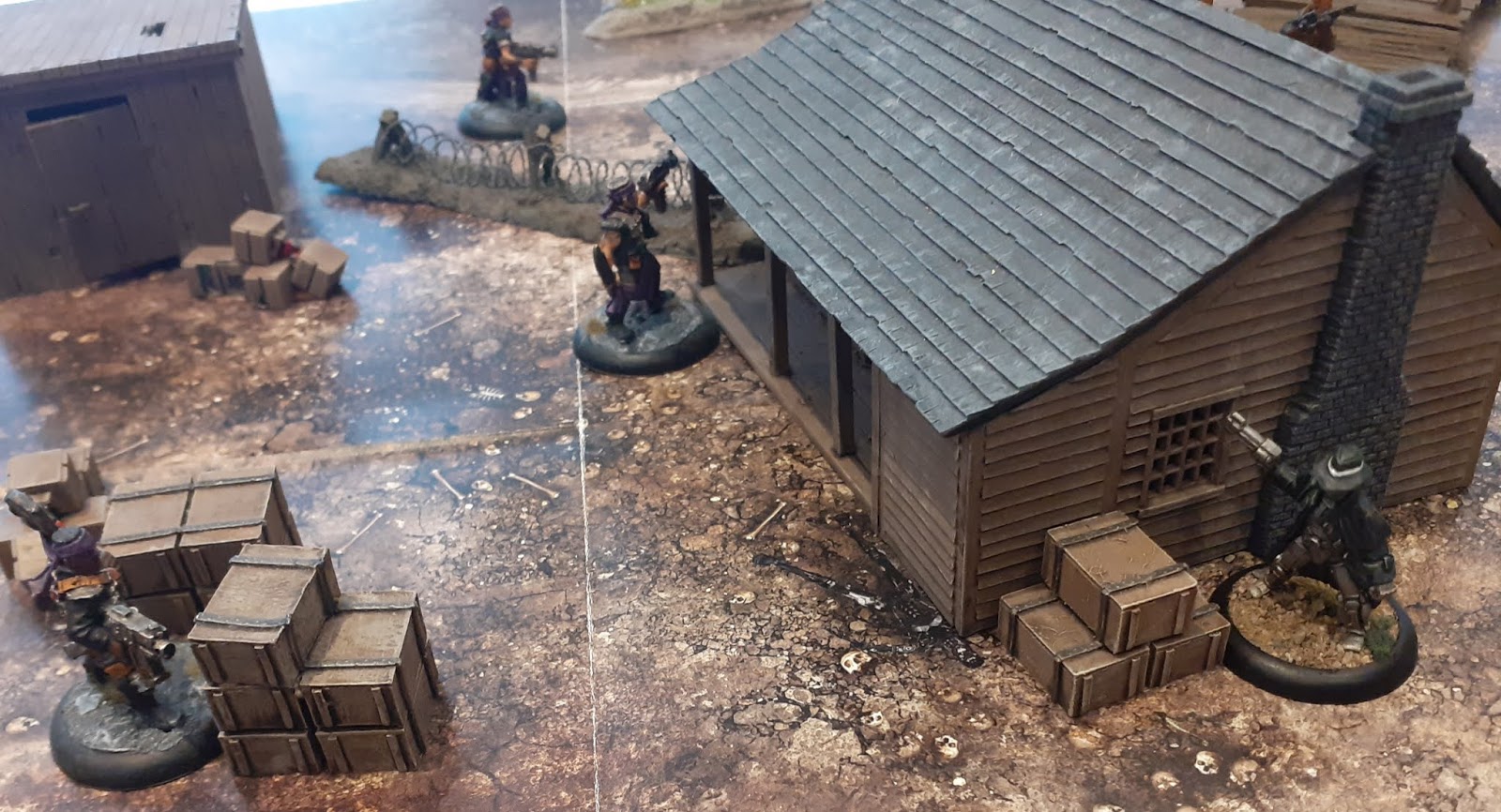 The pirates surged forwards at the sound of gunfire, urged on by a big man carrying a heavy bladed weapon. He opened fire at I2 and sent the bot sprawling backwards, failing to compute why his 'stealth mode' hadn't worked. 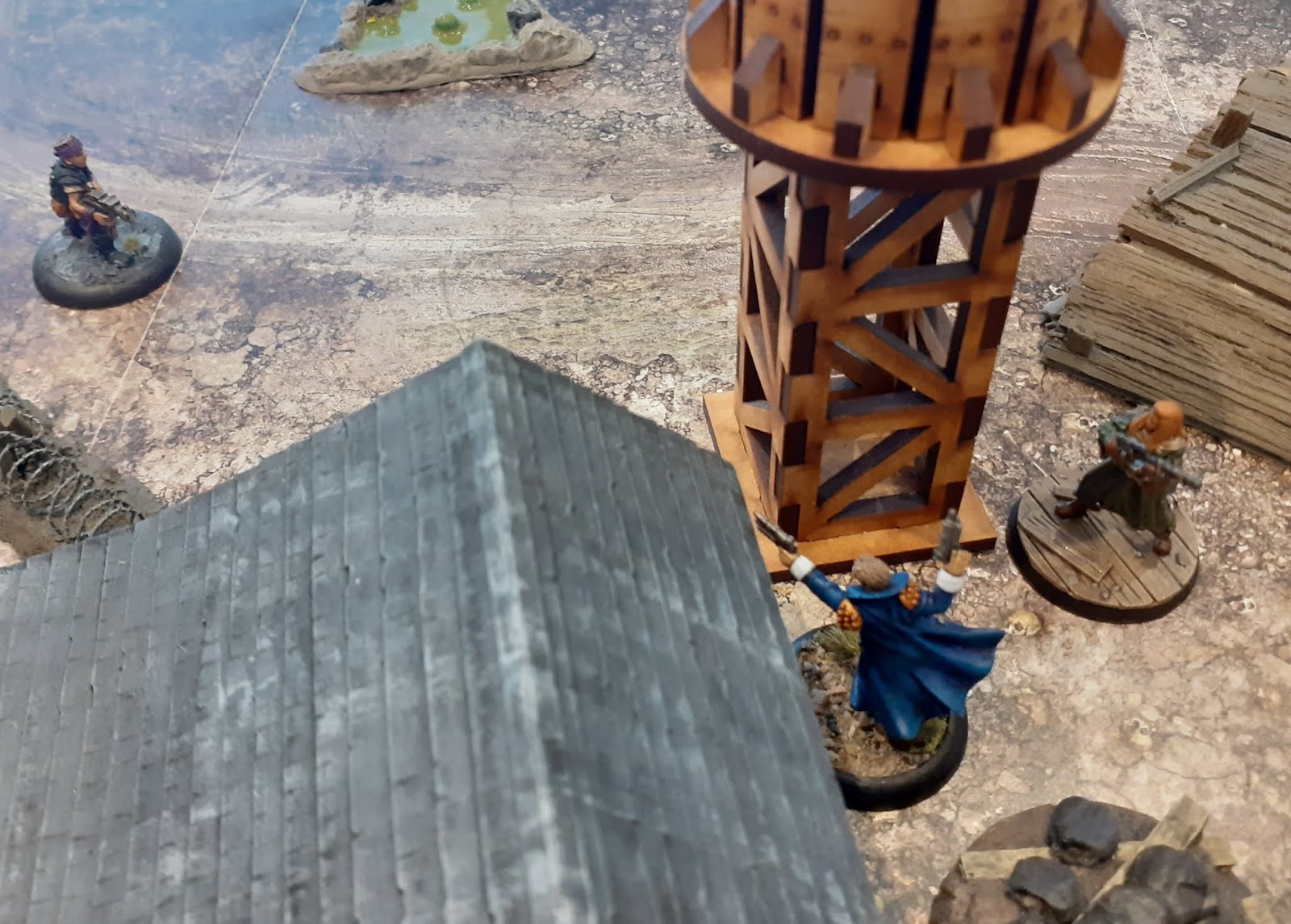 Dash unloaded his customised machine pistols at an advancing pirate, little more than a boy; bullets ripping open his chest. One of the young pirate's companions broke and ran, appalled at this gruesome sight. 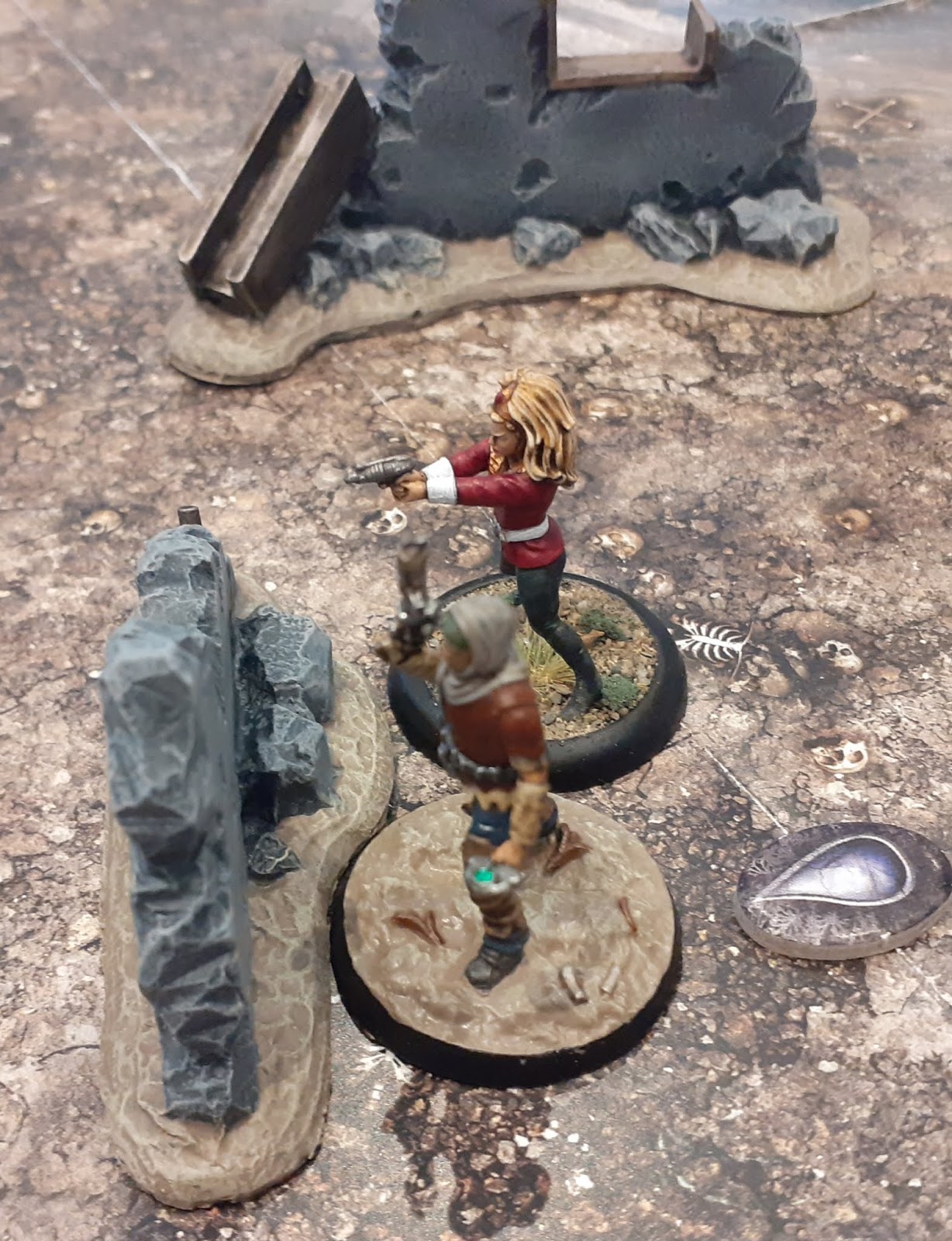 Having secured the prisoner, Kyla ran to support Vidar, who was taking heavy fire.
Turn 3 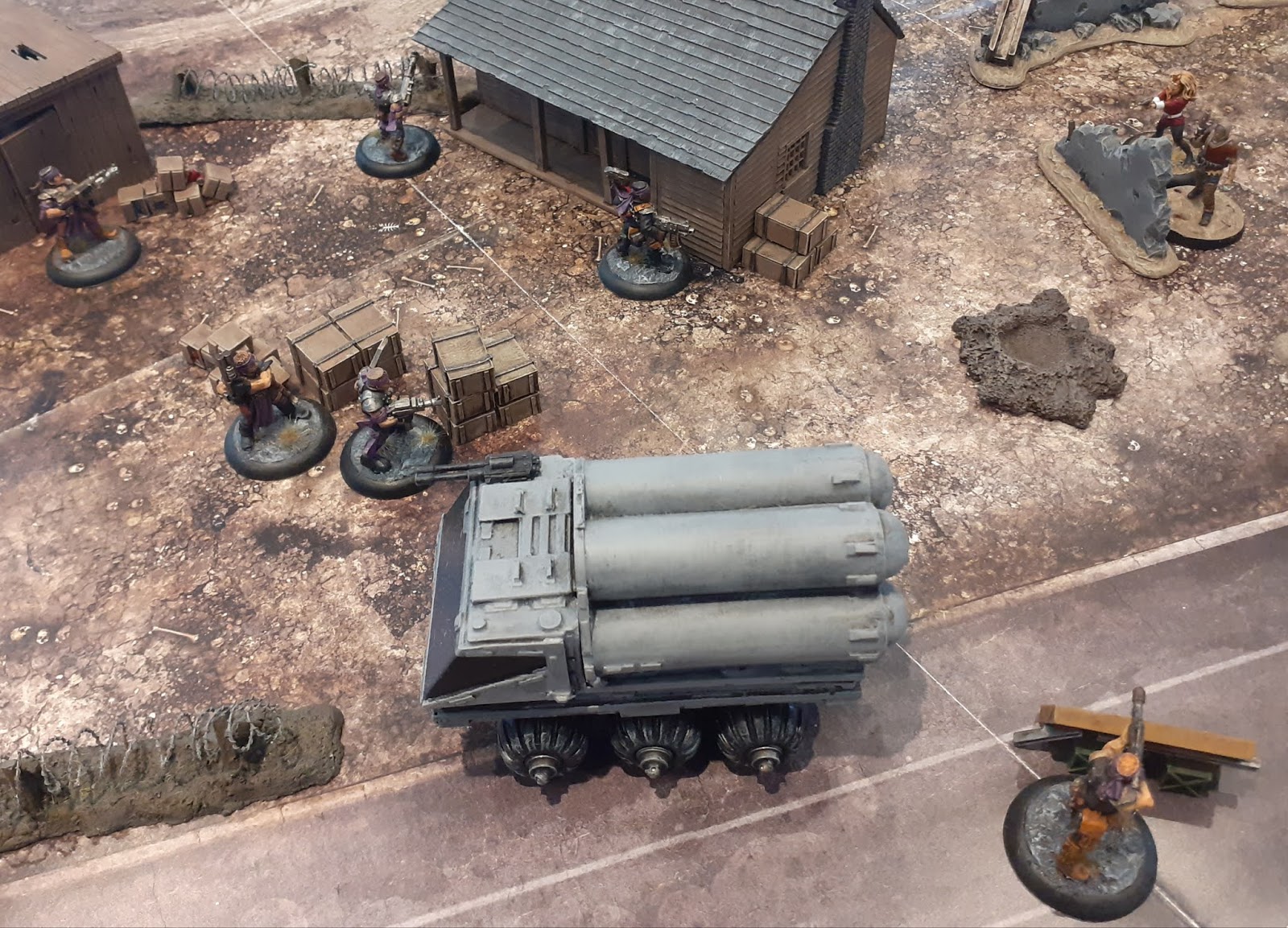 The pirates pushed forwards again, and blasts impacted all around Kyla and Vidar, as they realised that they were in the process of being out flanked. 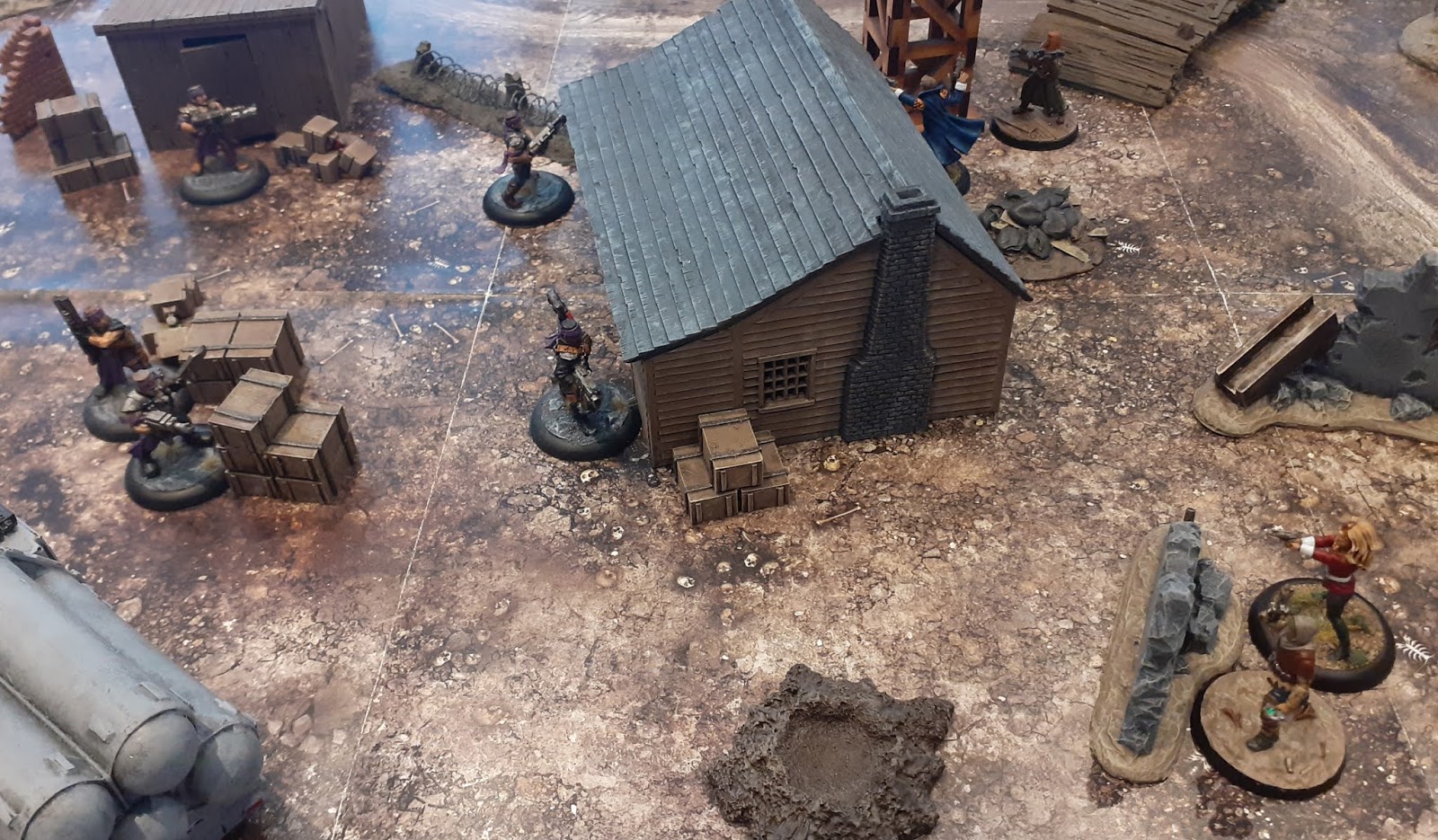 Realising that they were trapped and couldn't move without exposing themselves, Kyla and Vidar dug in. The cadet somehow managing to squeeze off a shot which hit one pirate in the throat.
Turn 4 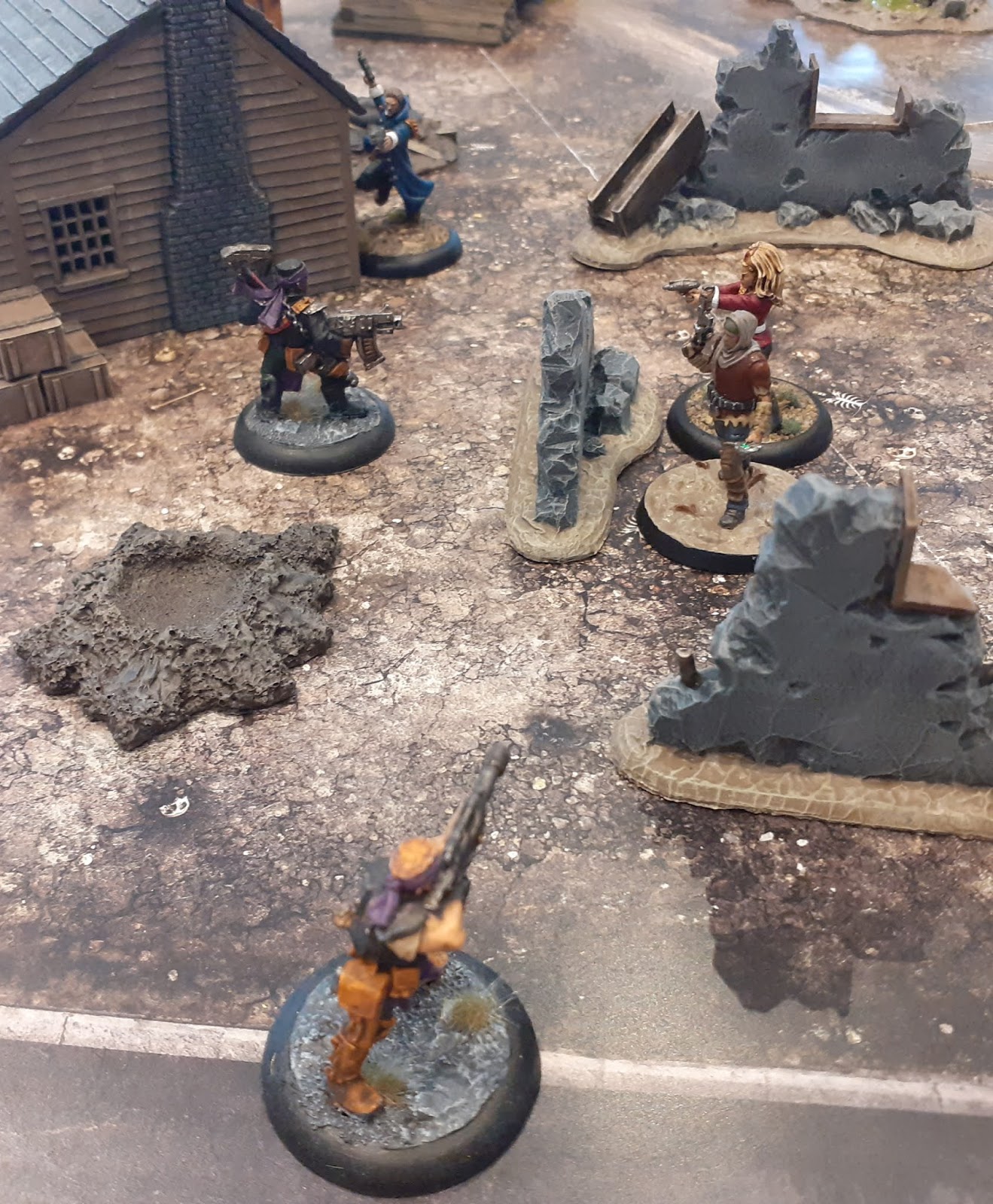 The trap closed as first the pirate leader put a shot into Vidar's chest, spinning him backwards, and then another pirate shot at Kyla from the left. She dodged just in time, but slipped, banging her head harshly on the rocks and losing consciousness. 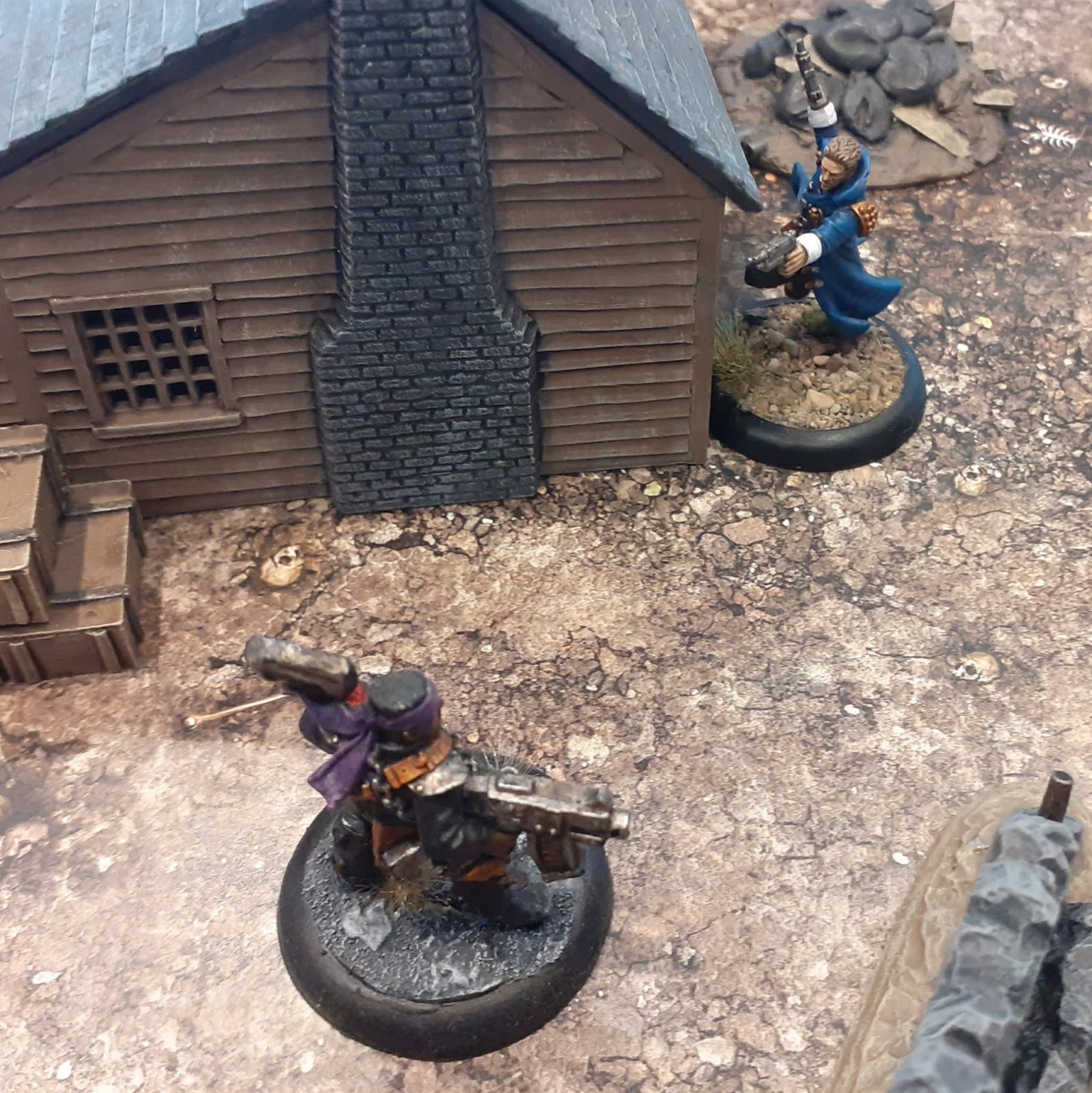 Seeing his new crew fall, and not knowing if they were still alive, Dash Halcyon came bursting out of cover, spraying the pirate chief with fire, killing him where he stood. Seeing his leader fall, another of the pirates fled.
Turn 5 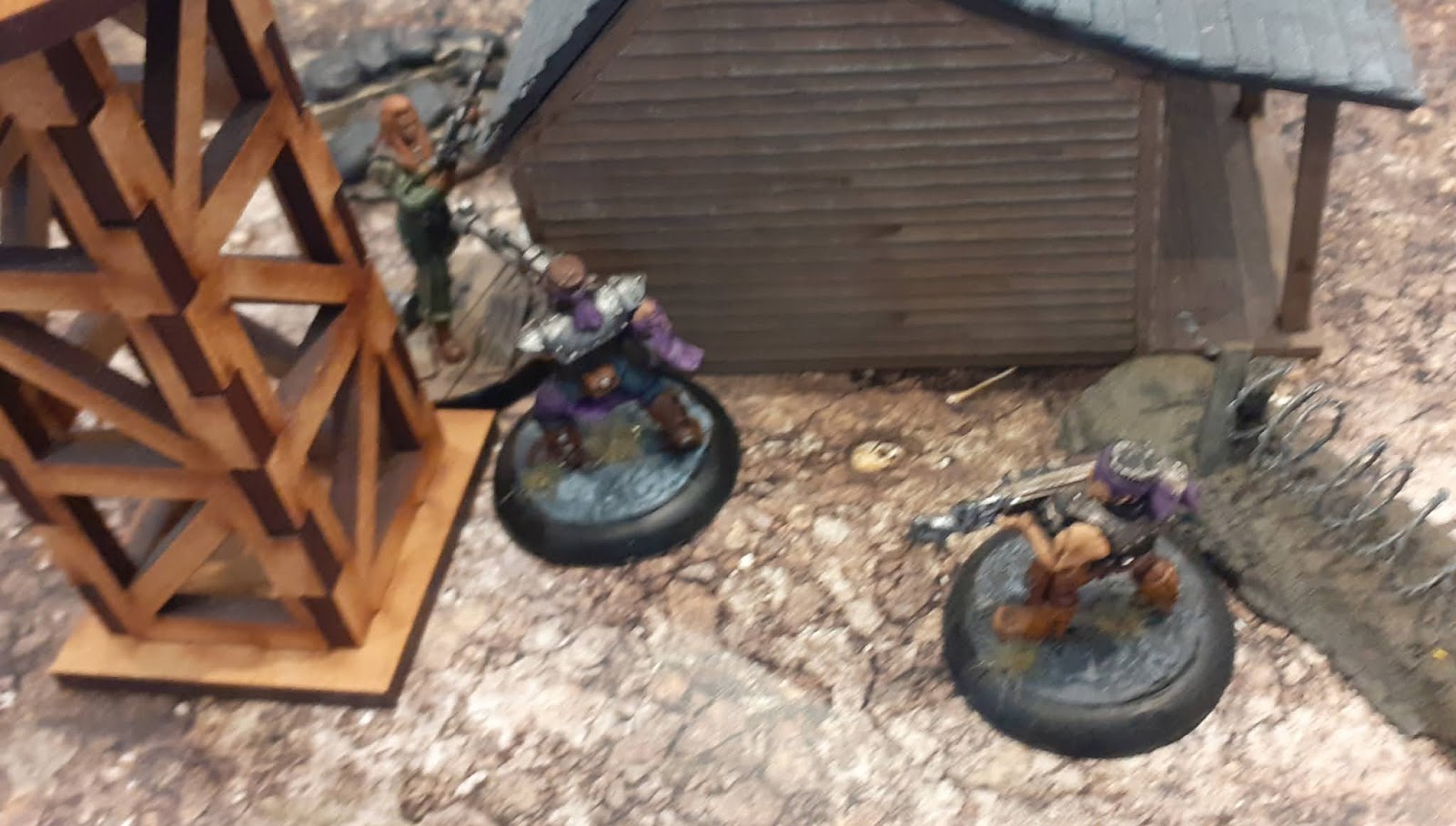 Unaware of what was happening elsewhere, Noria found herself assaulted by two of the pirates.
However, if they expected the woman to be an easy target, they were mistaken. Noria was from mining stock and knew how to handle herself. First one and then the other were swiftly despatched with the scrap pistol Vidar always insisted she carry. 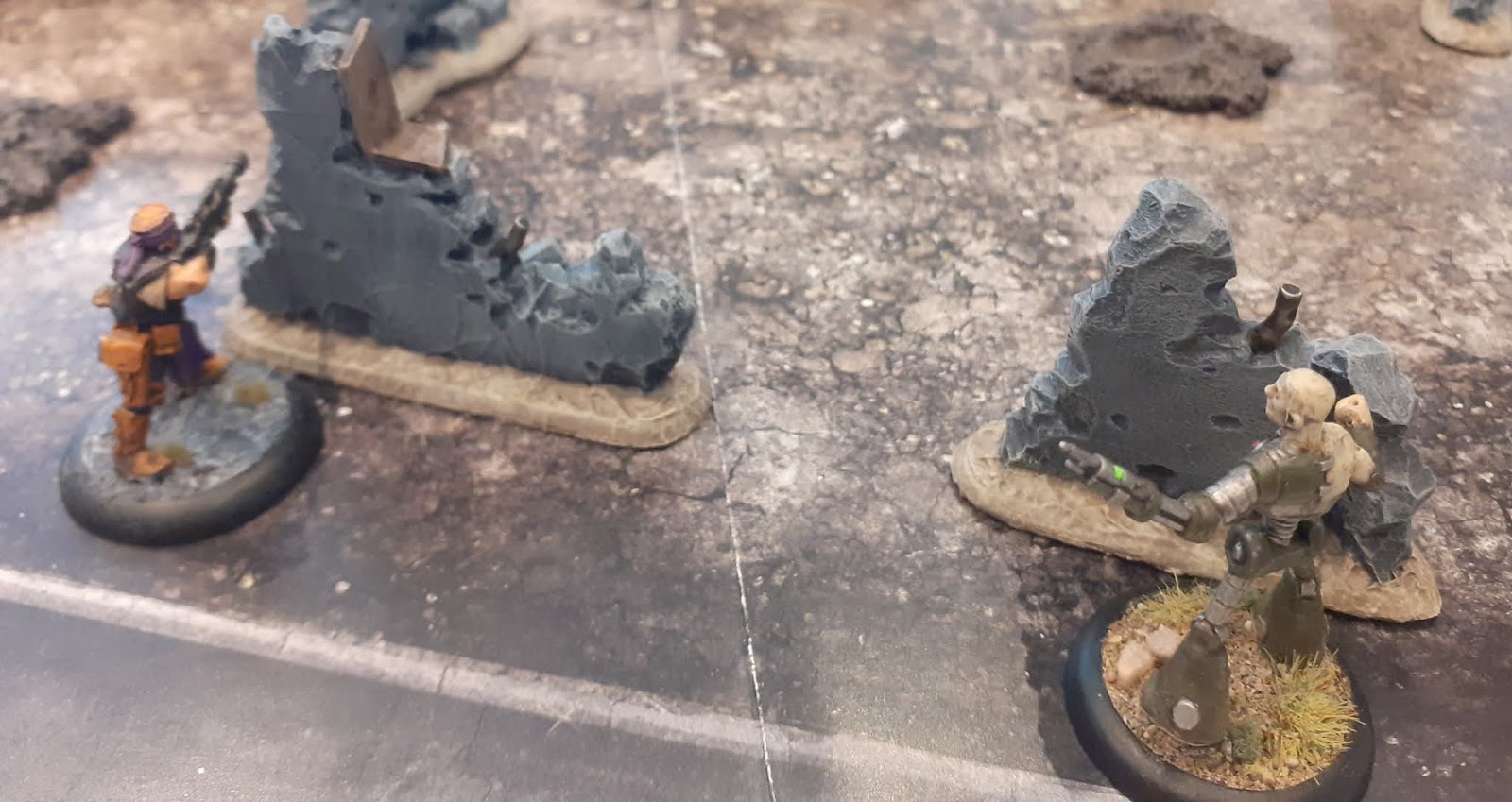 Realising that he was now alone, the last pirate took cover, somehow not noticing the loud clanking noise approaching behind him, until it was too late.
Aftermath
With the corporate traitor secured and the pirates dead or driven off, the crew looked to their casualties.
Kyla was only concussed, but Vidar was hurt badly and needed help back to the ship. I2 had been knocked offline, Dash would have to examine the damaged
Fortunately, the corporation man had arrived in a crawler which made the journey back to the ship easier. Dash also took the opportunity to clear him out a crate of goods he was clearly delivering to the pirates, along with the shipping manifests and inexplicably (but fortuitously) an upgrade kit, but no weapon.
Back on Axxon, the Sera Mining Corporation were delighted that the mole had been found and the pirates driven off and paid the crew well (combined earnings of 12 credits from different rolls). What was more, not only was Halcyon on the SMC's books, but a transmission from the haulage corporation which had been troubled by the pirates suggested they might have more work for the crew.
Dash bought the drinks that night. Despite Vidar's injury leaving him noticeably more fragile (Toughness-1), it had been a good day. They'd worked well together, been paid well and made some good contacts. They'd also ingratiate themselves with the very corporations that Vidar was looking for dirt on.
Maybe he'd get the ship paid off sooner that he thought...
***
Well, that was fun. It really does work as a fully solo game. The generation of the scenario and aftermath rolls give you more than enough to build an interesting story, without relying on somebody else's script.
The game rules simple enough that you aren't struggling to remember everything  (although I think I did forget to add weapon damage to rolls quite often), whilst the combination of the initiative rules and AI system give you an opponent that is a genuine challenge. It was touch and go at points.
I liked this, so you can expect to hear more of The Fortune's Fool.
Posted by Kieron at 03:33