Defence of the Tractor Factory

24th August 1942. The 16th Panzer Division has burst through Soviet lines into the northern suburbs of Stalingrad, Rynok and Spartanovka. 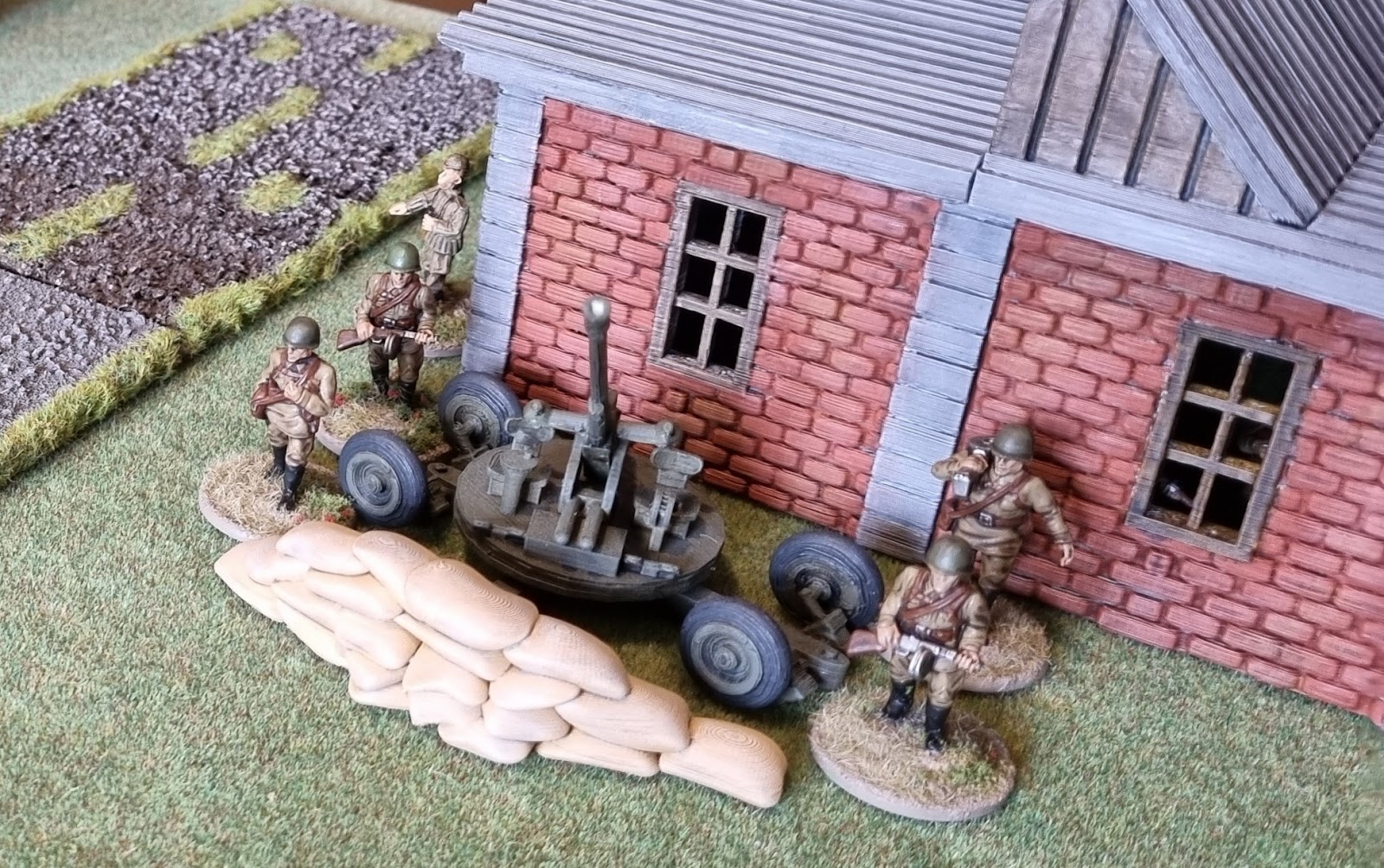 However, waiting for them at the Tractor Factory is a cobbled together force of NKVD, People's Militia and hastily built T-34s from the factory itself. 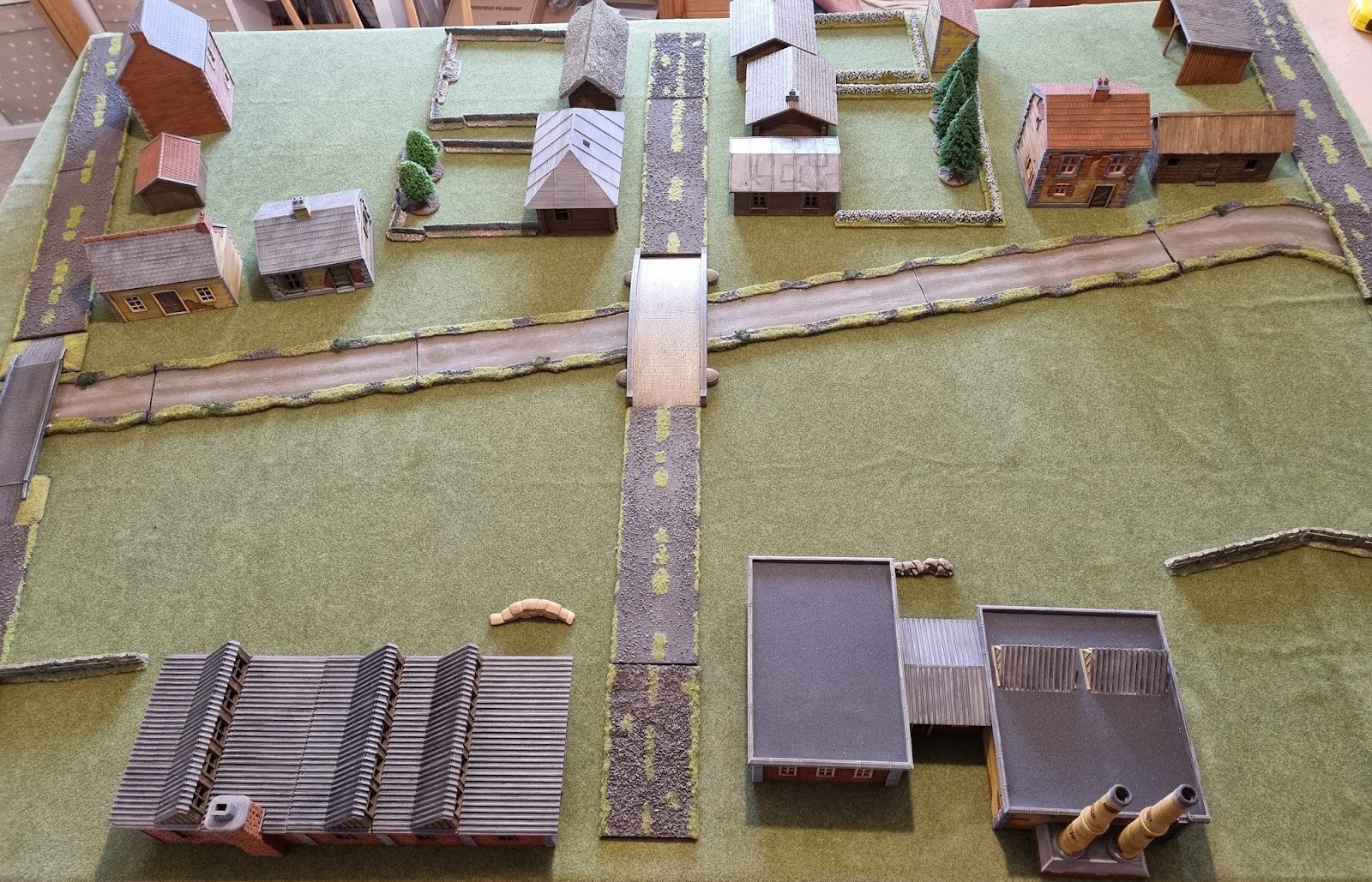 This scenario from the Stalingrad campaign book features two 1500 point armies trying to cross a river with three bridges. Ostensibly, the Germans were attacking, giving them a preparatory bombardment, whilst the Soviets had trench lines and sandbags, but the victory points were the same for both sides. 1 VP for each enemy unit destroyed, and 1 VP for each unit on the other side of the river by the end of the game. 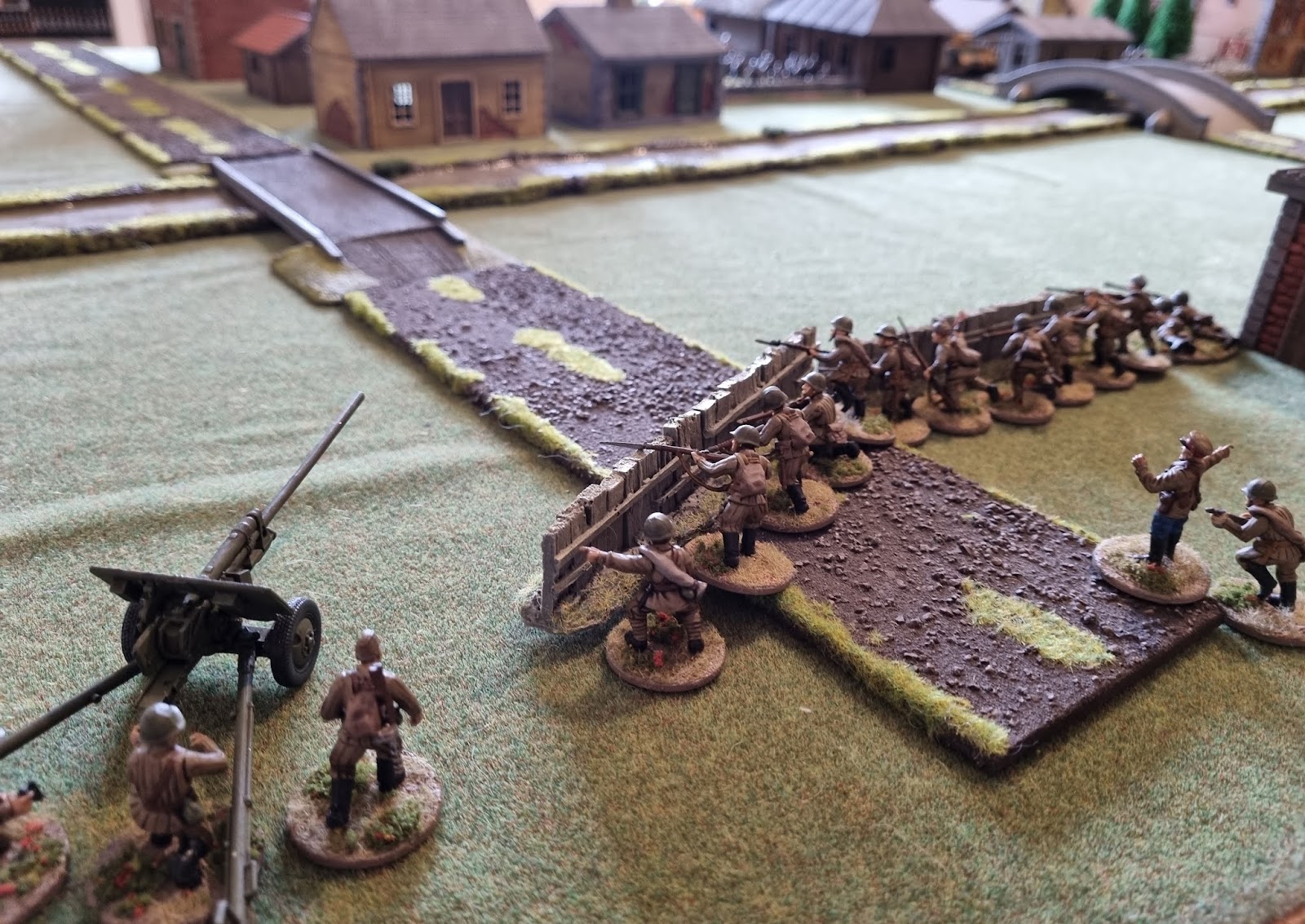 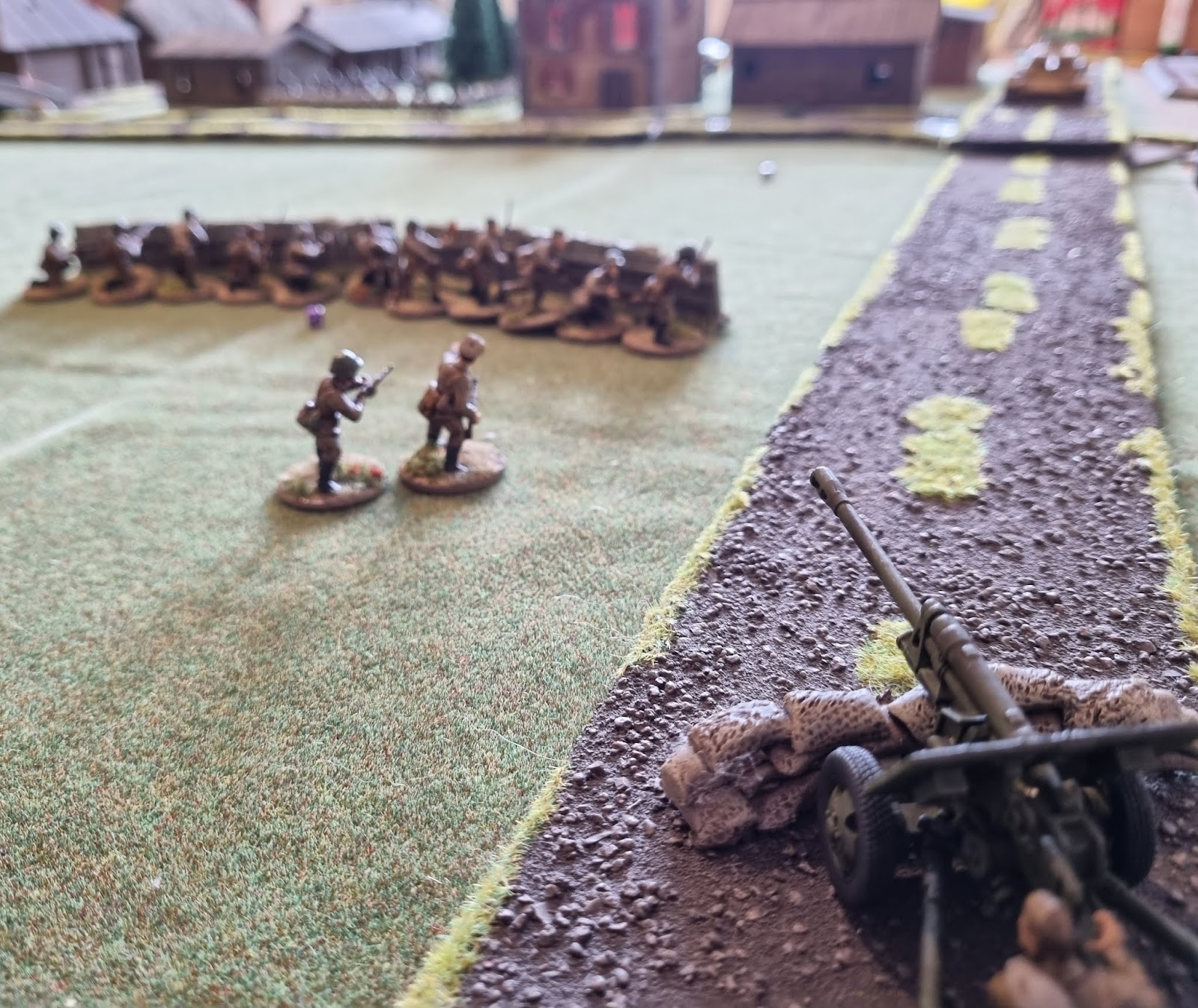 The game opened with a preparatory bombardment which dropped pins all along the Soviet lines and managed to kill both the sniper and the medic. Largely ineffective fire flew back and forth across the river. 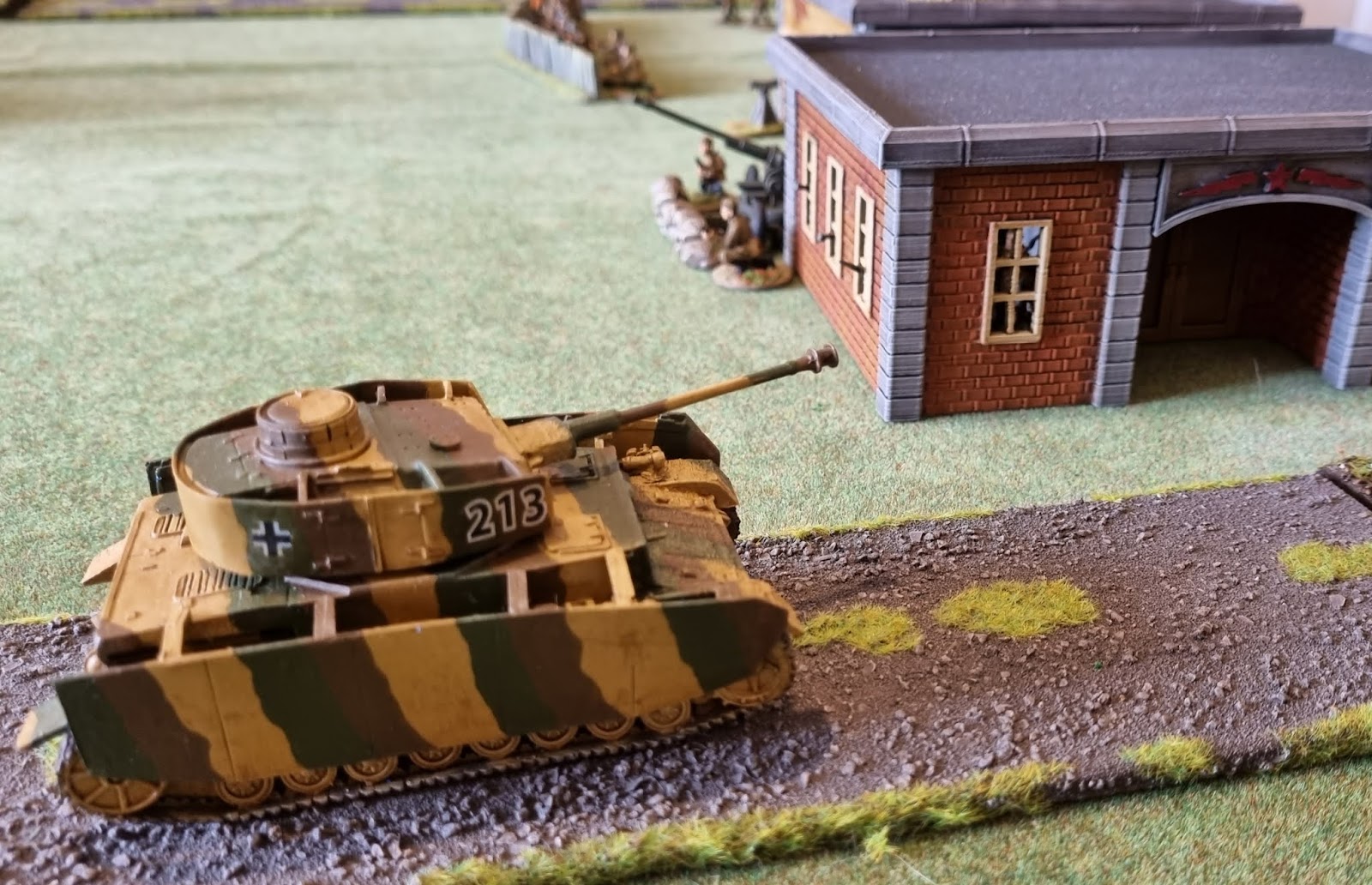 The most significant move of the turn saw a blitzkrieg attack from a Panzer IV straight towards the factory, gunning down the crew of factory workers manning one of the AA guns.
Turn 2 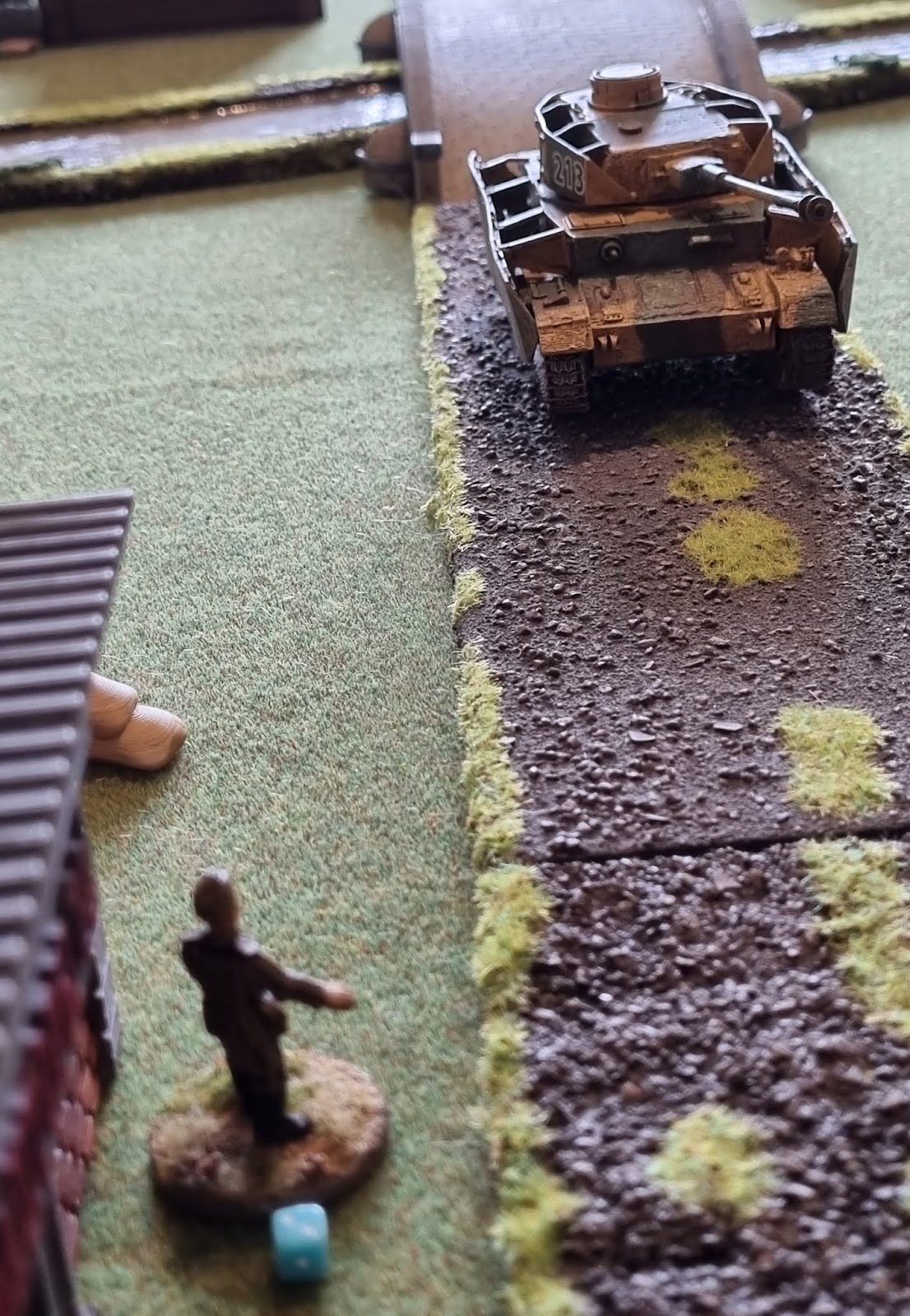 With a Panzer IV heading directly for them, the Soviets desperately tried to find something that could at least slow it down, including an artillery strike, and give time for the T-34s to roll out of the factory to the rescue. 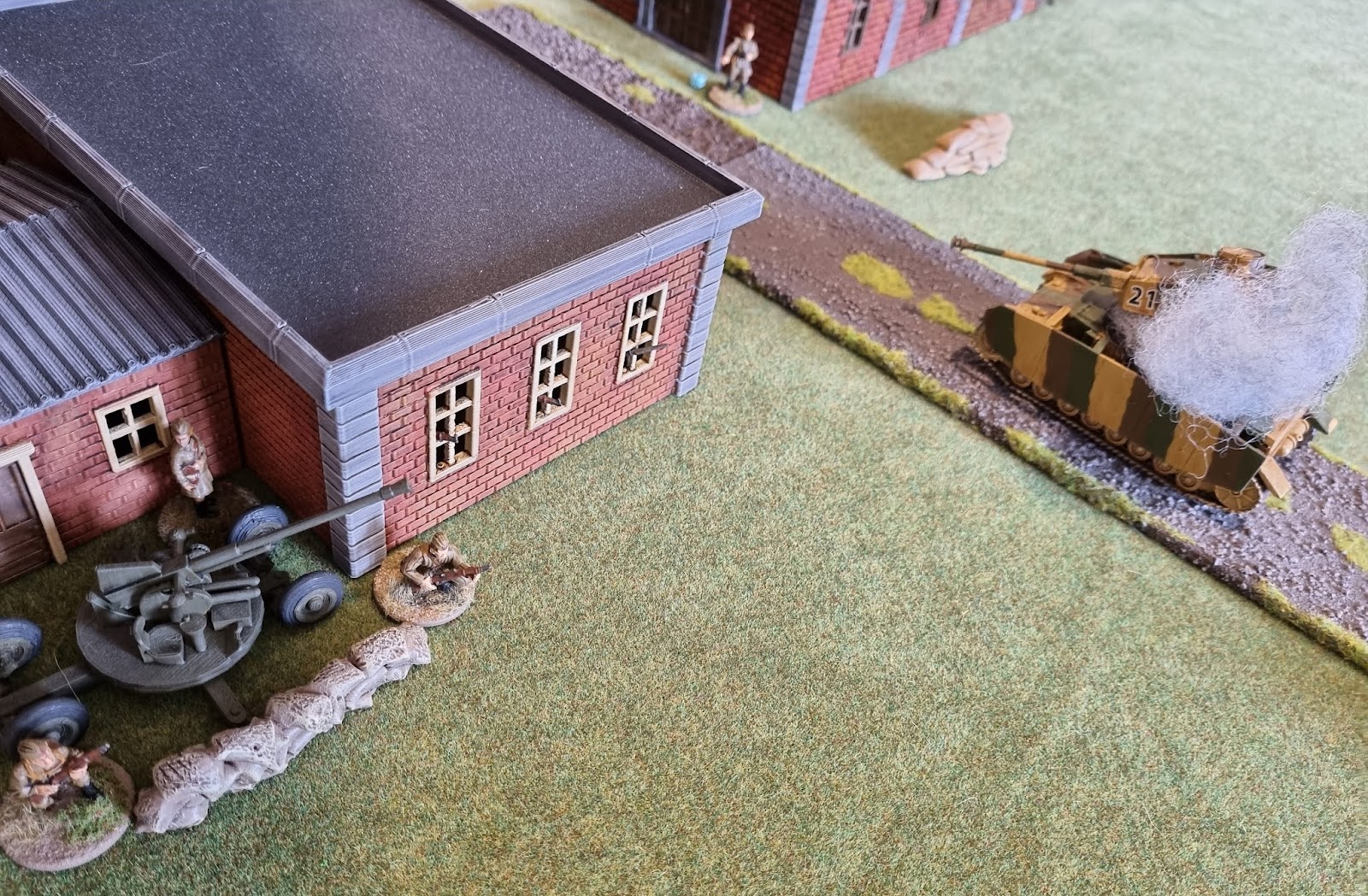 The remaining AA Gun traversed on its turntable, took aim at the exposed flank of the enemy tank, fired and blew it up at the first time of asking. One German thrust had been halted. 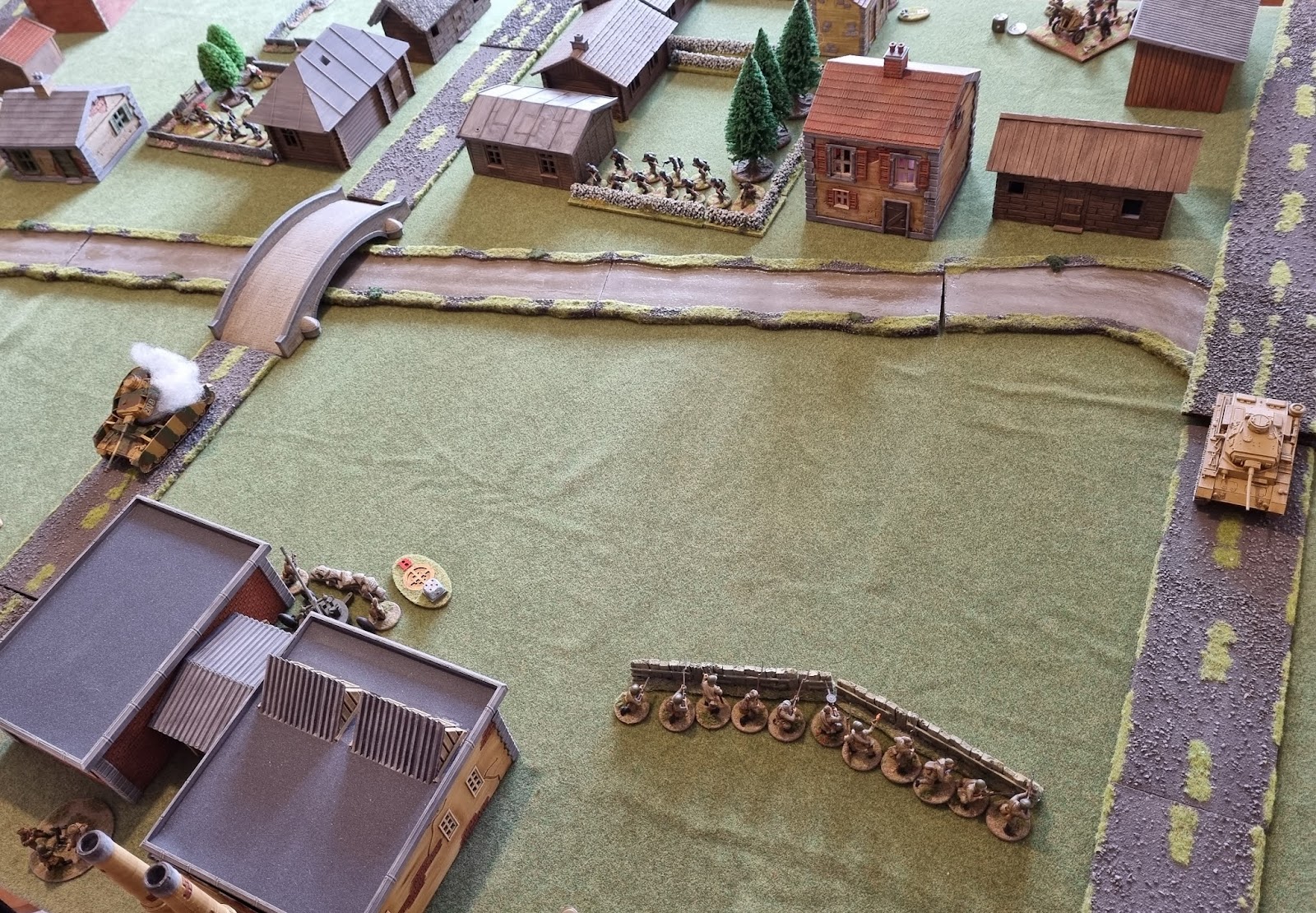 However, now a Panzer III rumbled across another bridge. To add injury to insult, the German Howitzer found its mark on the ZiS-3 covering that bridge and despite the crew hitting the dirt, only one of them survived.
Turn 3 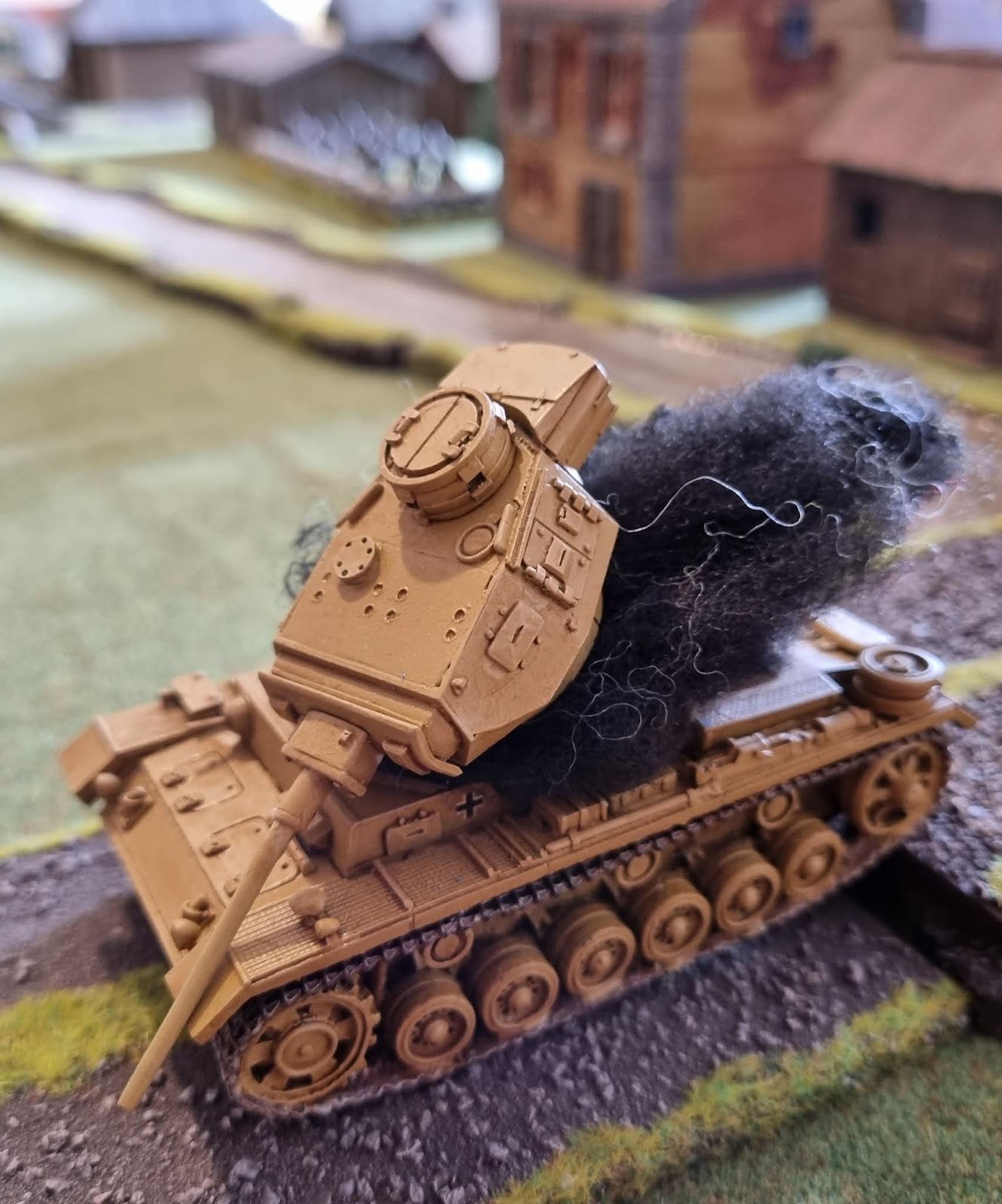 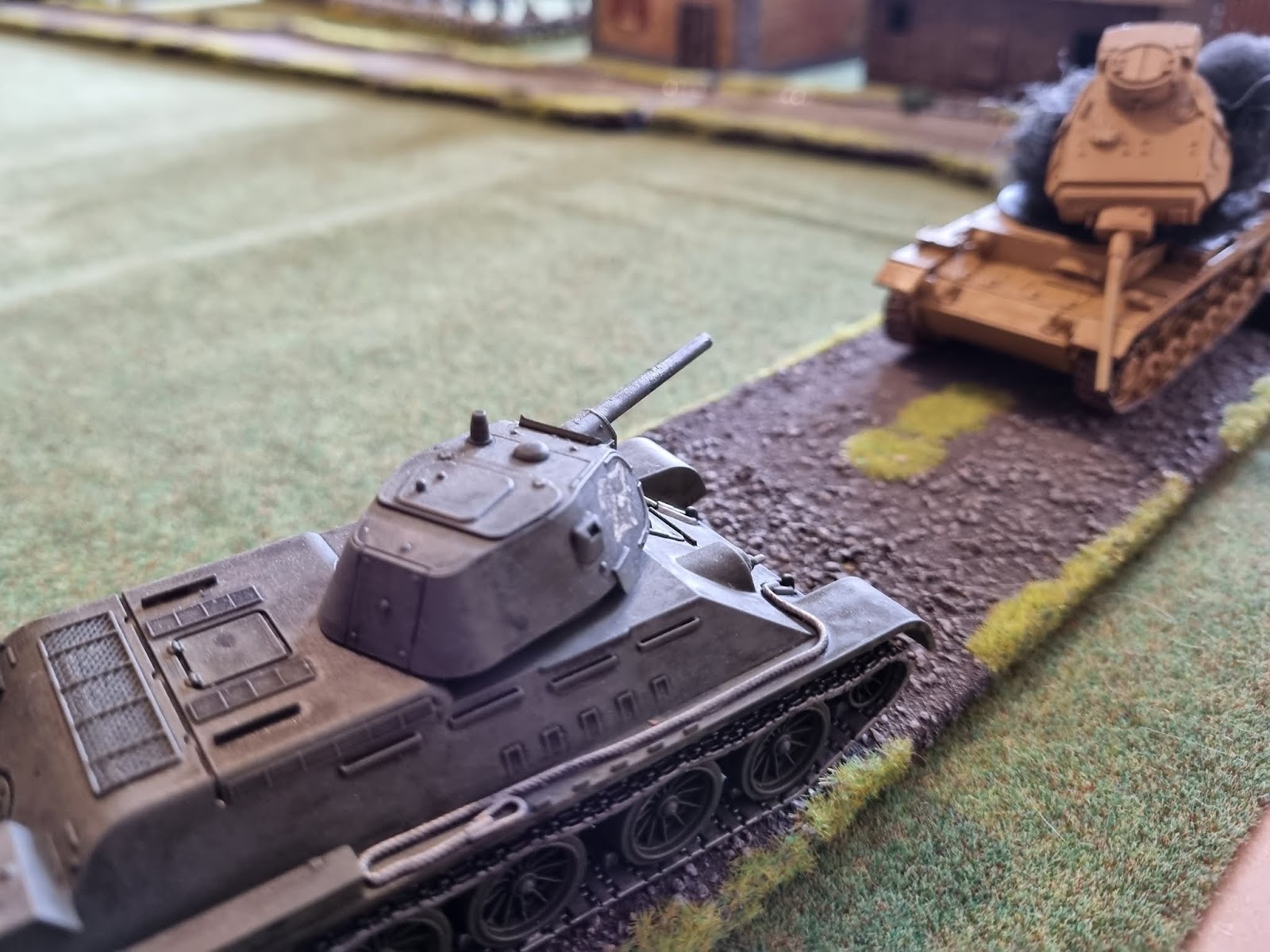 With the enemy armour neutralised, the arrival of an incomplete T-34 suggested a shift in fortunes. Possibly allowing the Russians to go on the offensive.
Turn 4 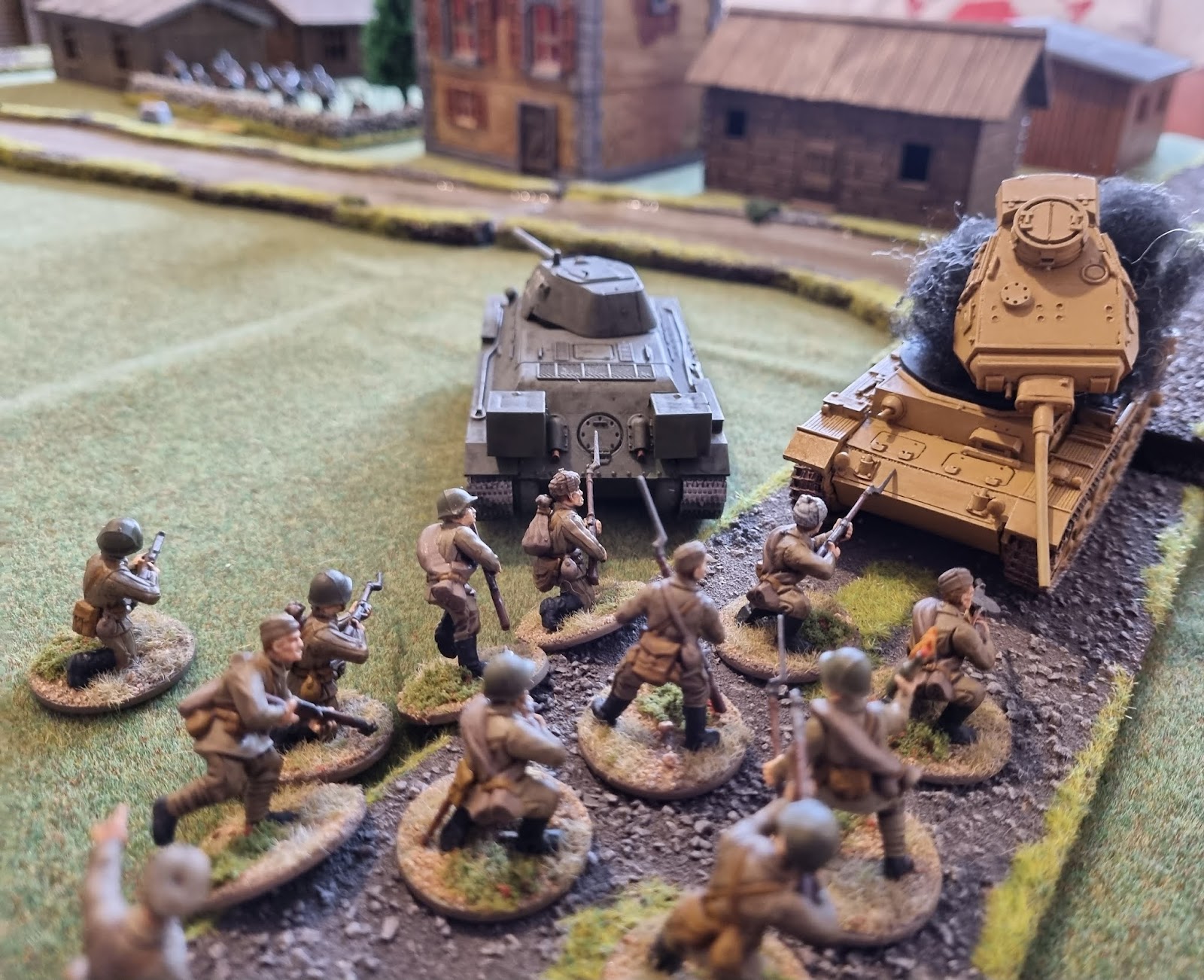 Sensing a weakness on the German flank, Soviet armour and infantry pushed towards the railway bridge past the burning hulk of a Panzer. However, the T-34 was hit by a lucky mortar round, halting it in its tracks. 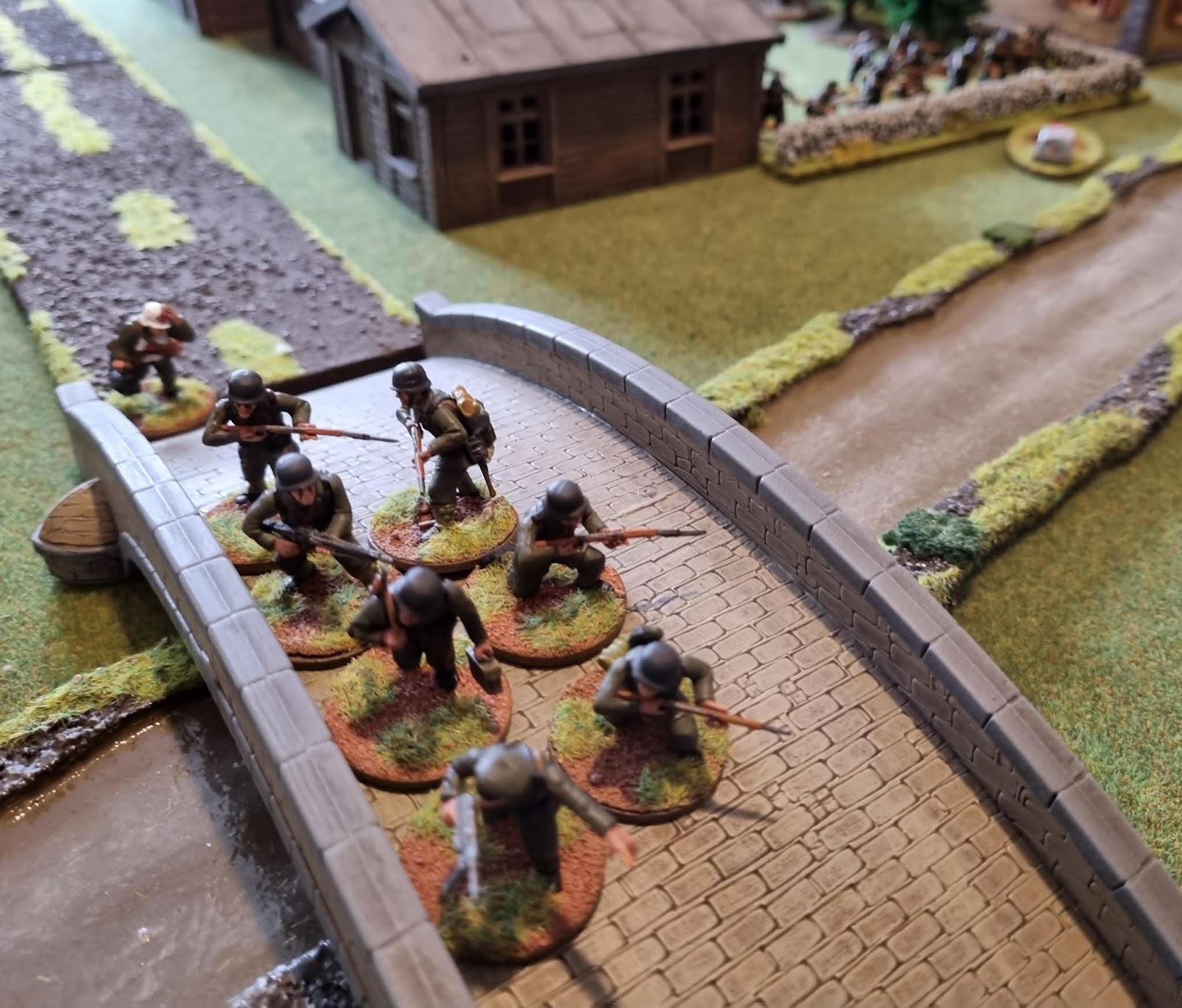 German infantry saw an opportunity to push across the central bridge behind the destroyed Panzer IV, using the wreck as cover. 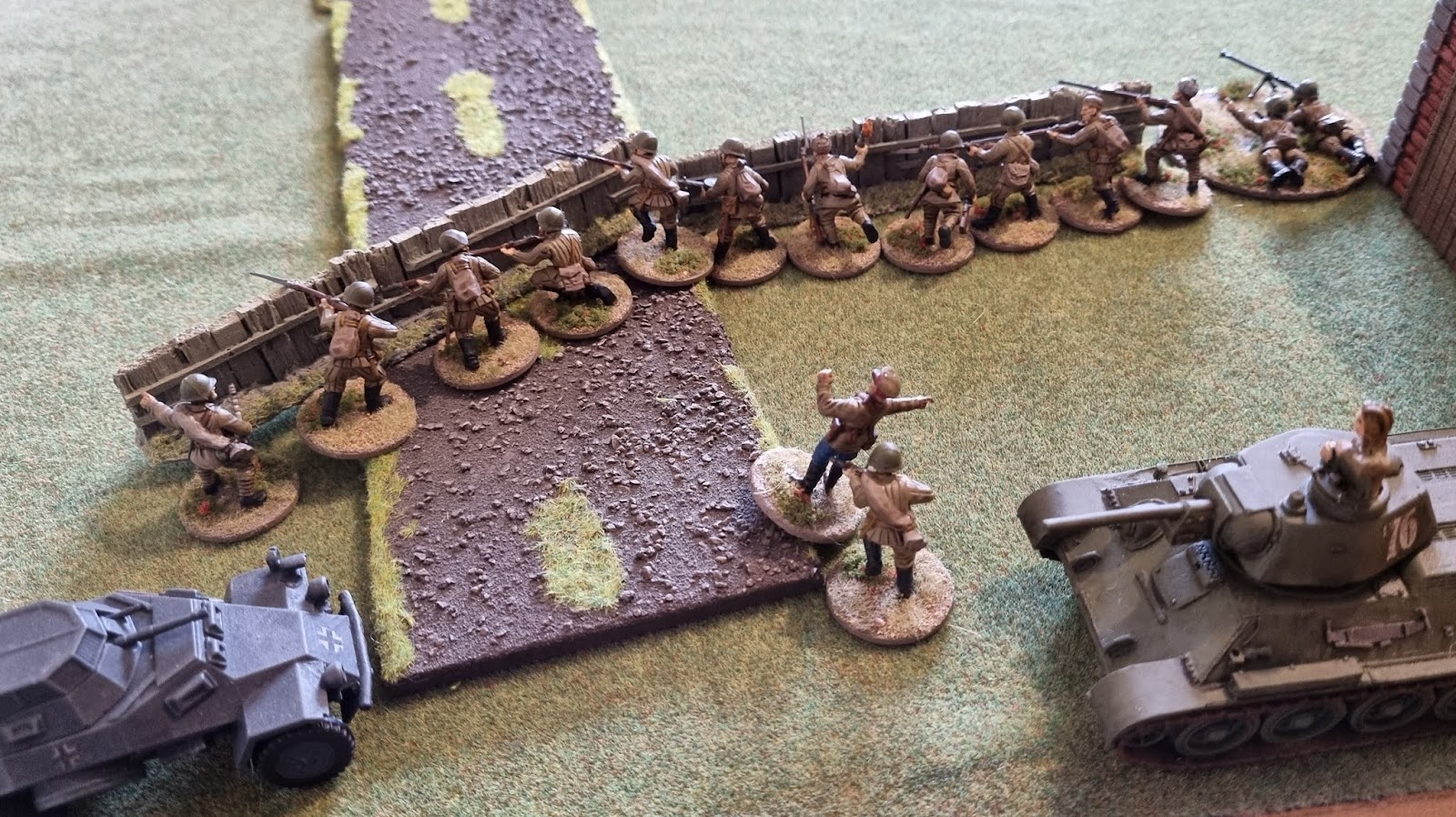 Simultaneously, the SdKfz 222 arrived on an outflanking manoeuvre, getting behind the Soviet lines, but failing to make an impact against the dug in infantry.
It was met by an equally, if not even more, ineffective T-34 which managed to miss its target from point blank range.
Turn 5 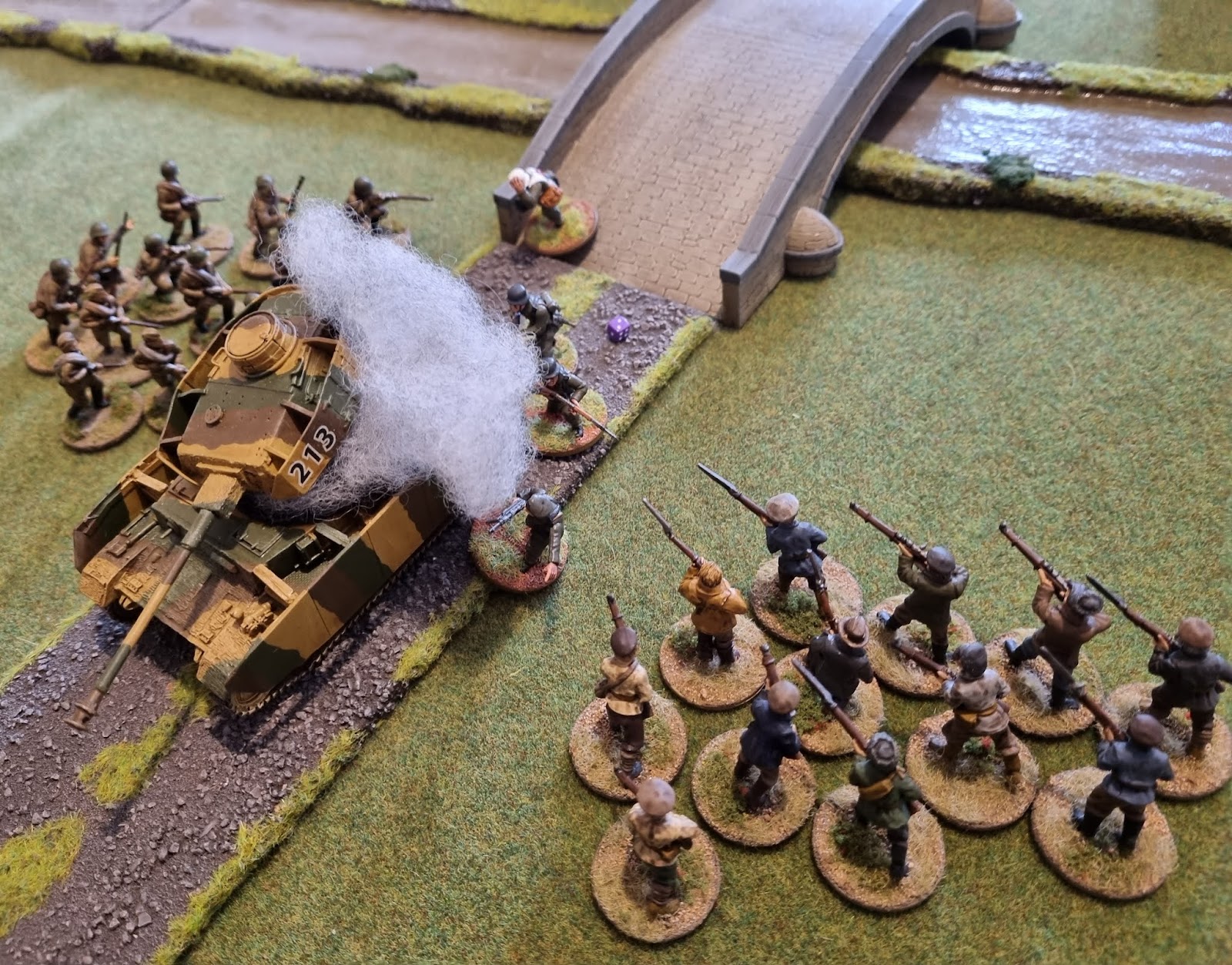 With time beginning to run out, the People's Militia left the protection of the factory and advanced towards the central bridge. Pouring fire into the isolated German infantry as they went. 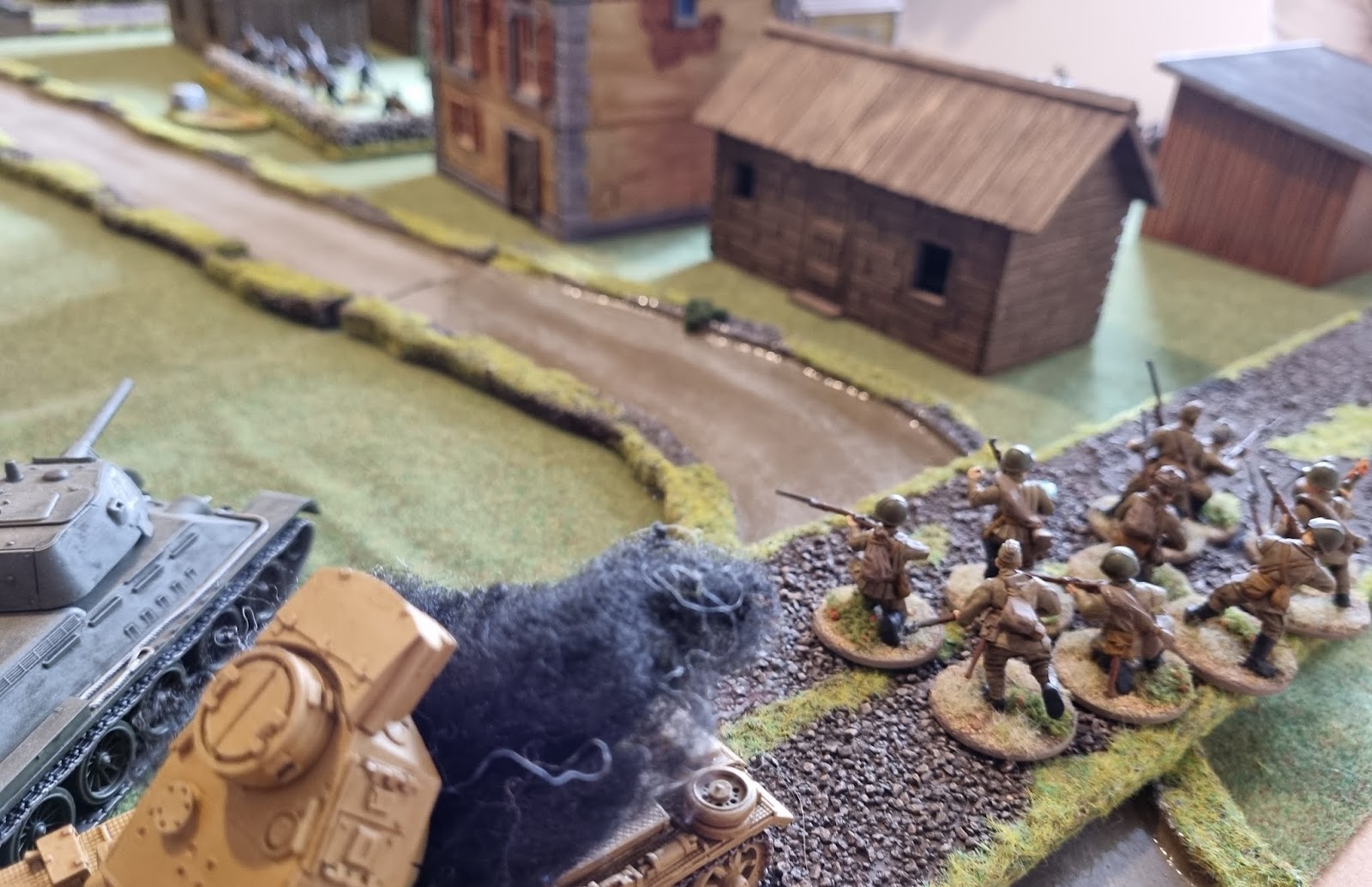 The inexperienced T-34 crew were either unwilling or unable to get their vehicle moving under heavy mortar fire and so the infantry pushed on across the river without armoured support. 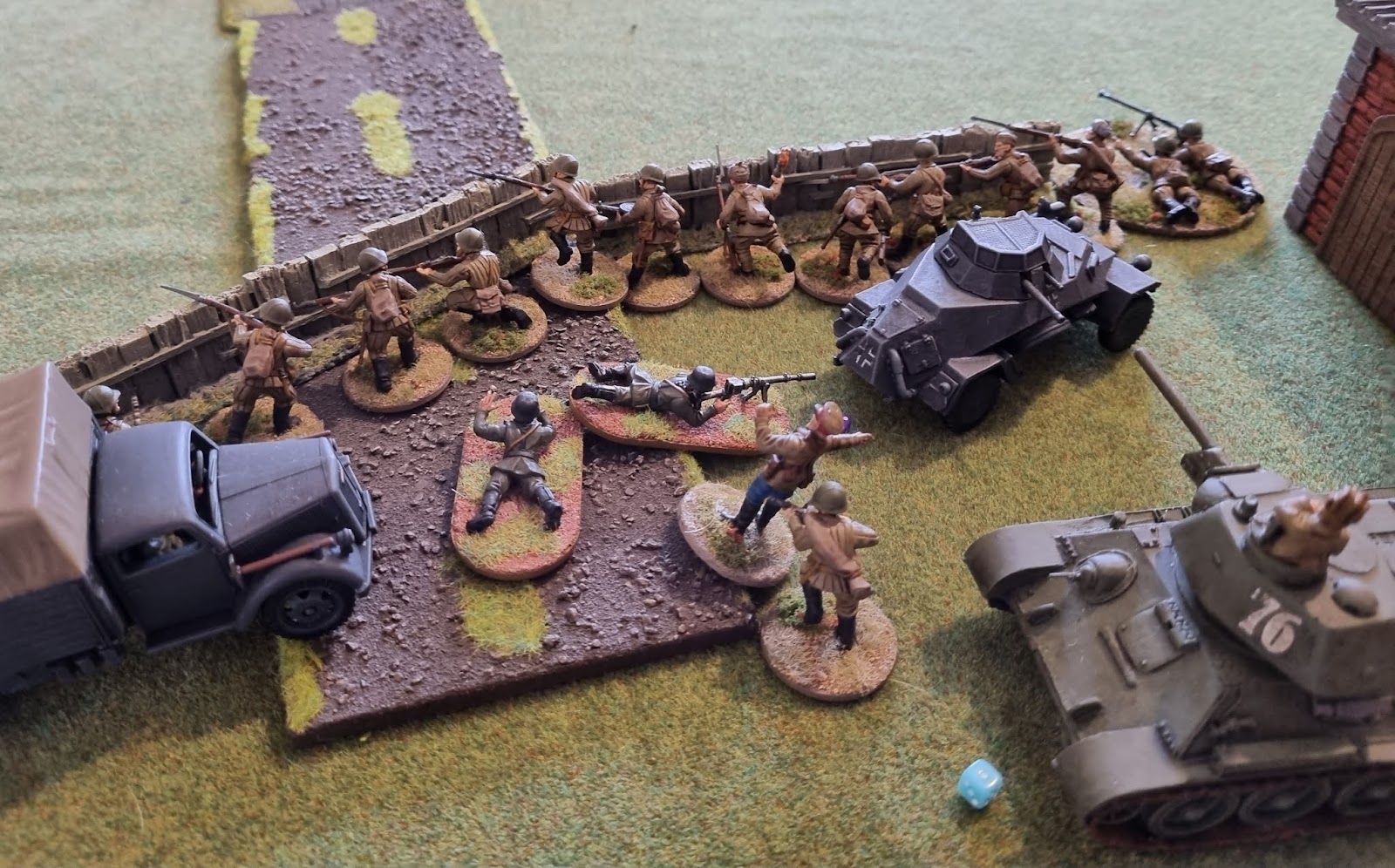 However, further outflanking forces arrived behind the Soviet lines but were prevented from disembarking from their transport by massed rifle fire, not by the T-34 that managed to miss the anti-tank rifle team with both its MMGs.
Turn 6

Pioneers clambered out of the truck and the flamethrower used up all of its fuel incinerating much of the infantry packed into the trench. Even with 'encouragement' from the Commissar taking another life, the rest lost their nerve and fled the charnel pit. 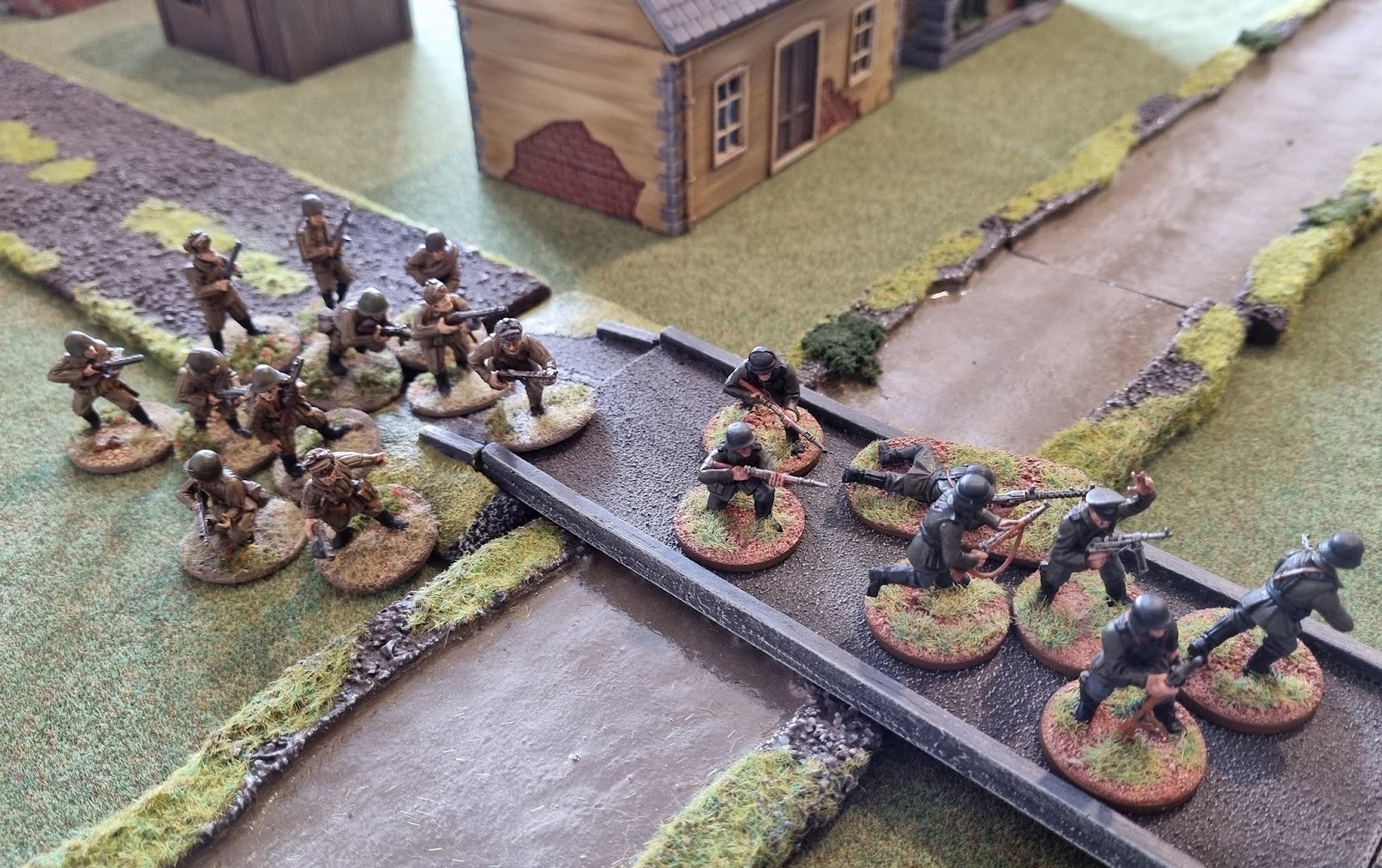 More pioneers rushed across the bridge but were caught in the open by an outflanking NKVD assault squads. Eleven SMGs opened fire at point blank range and gunned the Pioneers down to a man. 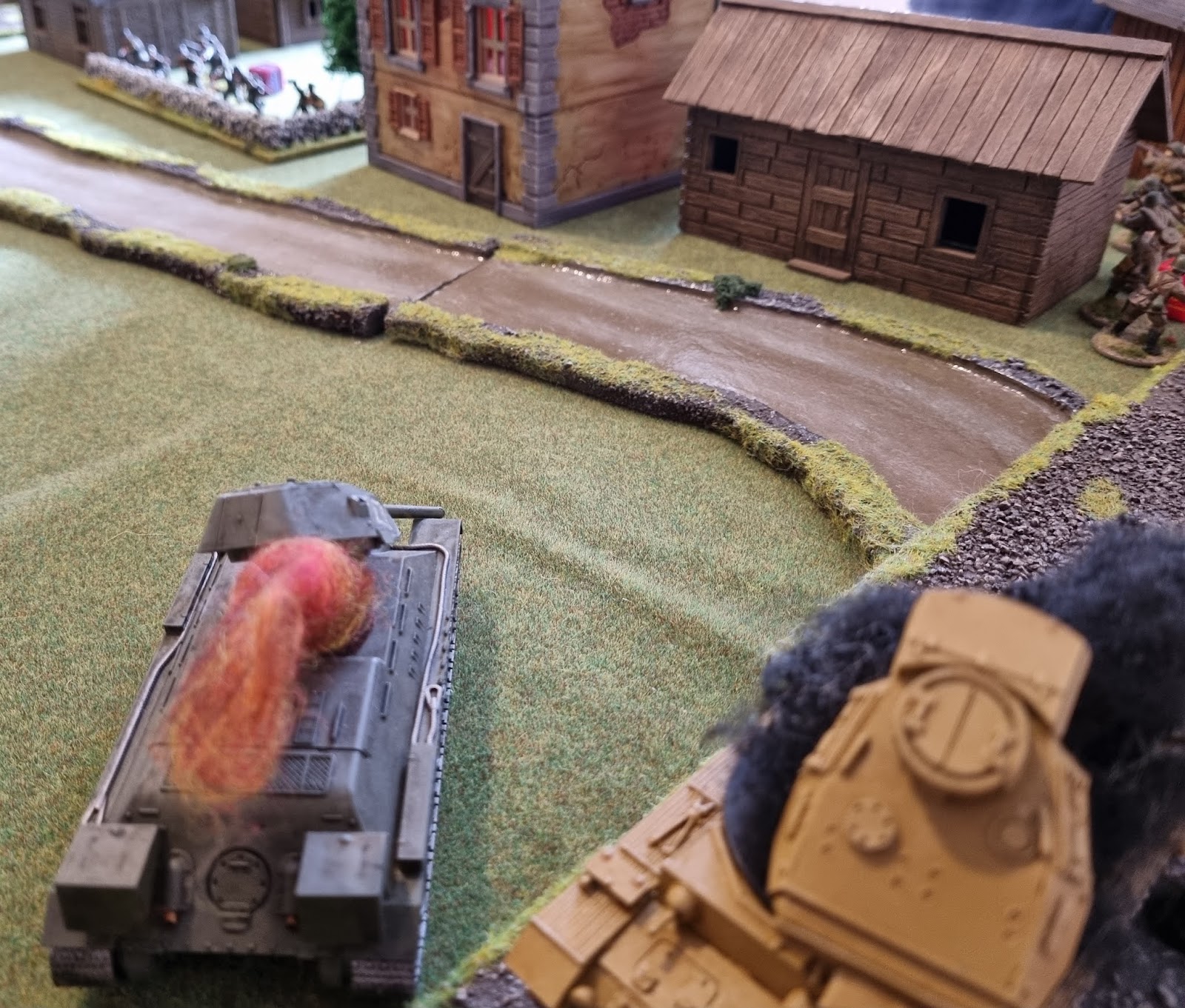 Repeated shelling from a heavy mortar finally took its toll on the stalled T-34, but in return AA Gun fire into a building destroyed the German sniper team. 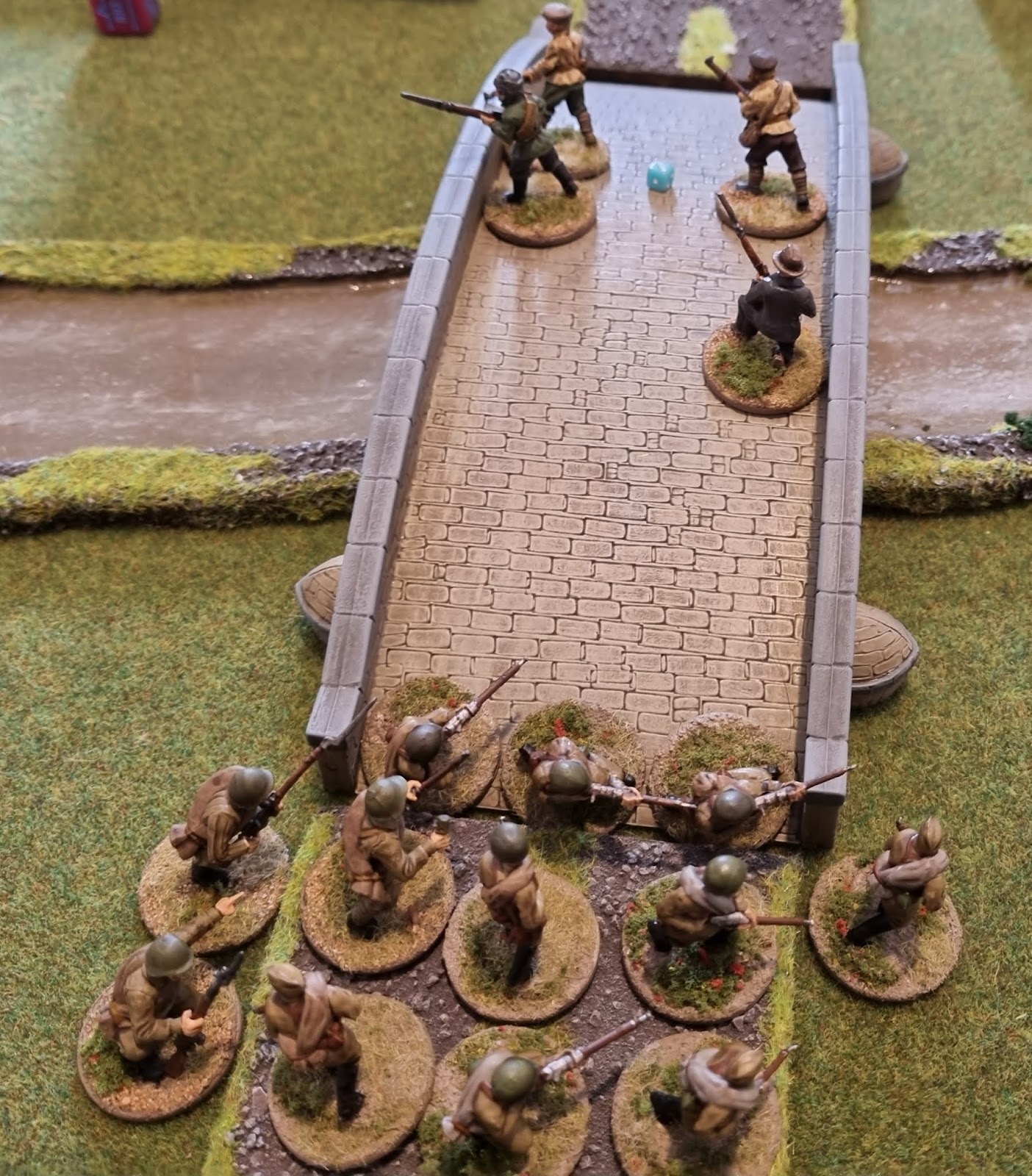 In a shocking breach of the Geneva convention, the People's Militia assaulted the German medic and the the remains of the squad hiding behind the tank, before pushing on over the bridge, where they took heavy fire. 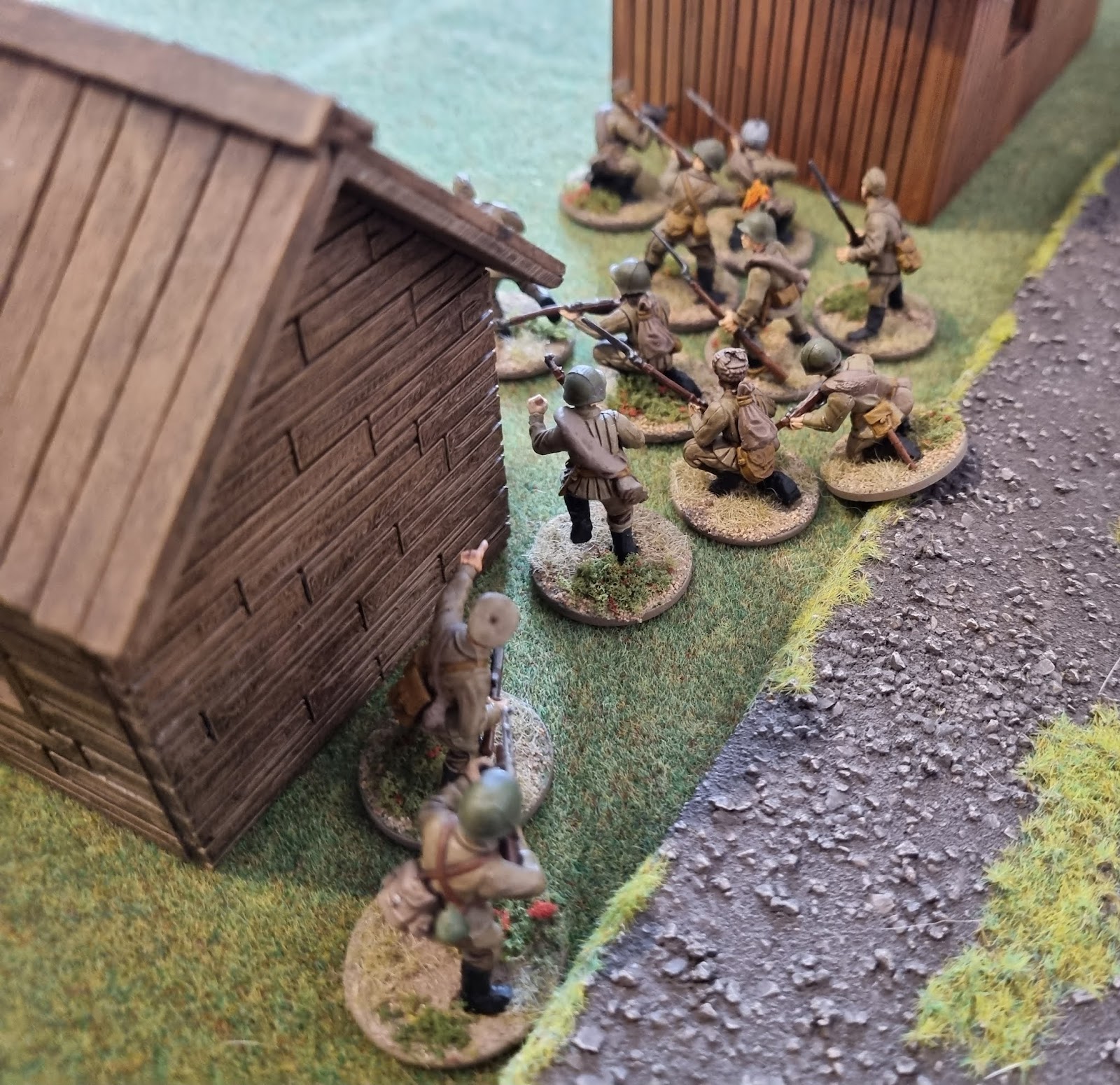 Meanwhile, the Soviet assault across the bridge ran amongst the buildings of Spartanovka looking for Germans to kill, but a mortar strike took out the enemy howitzer before they could get there.
Turn 7 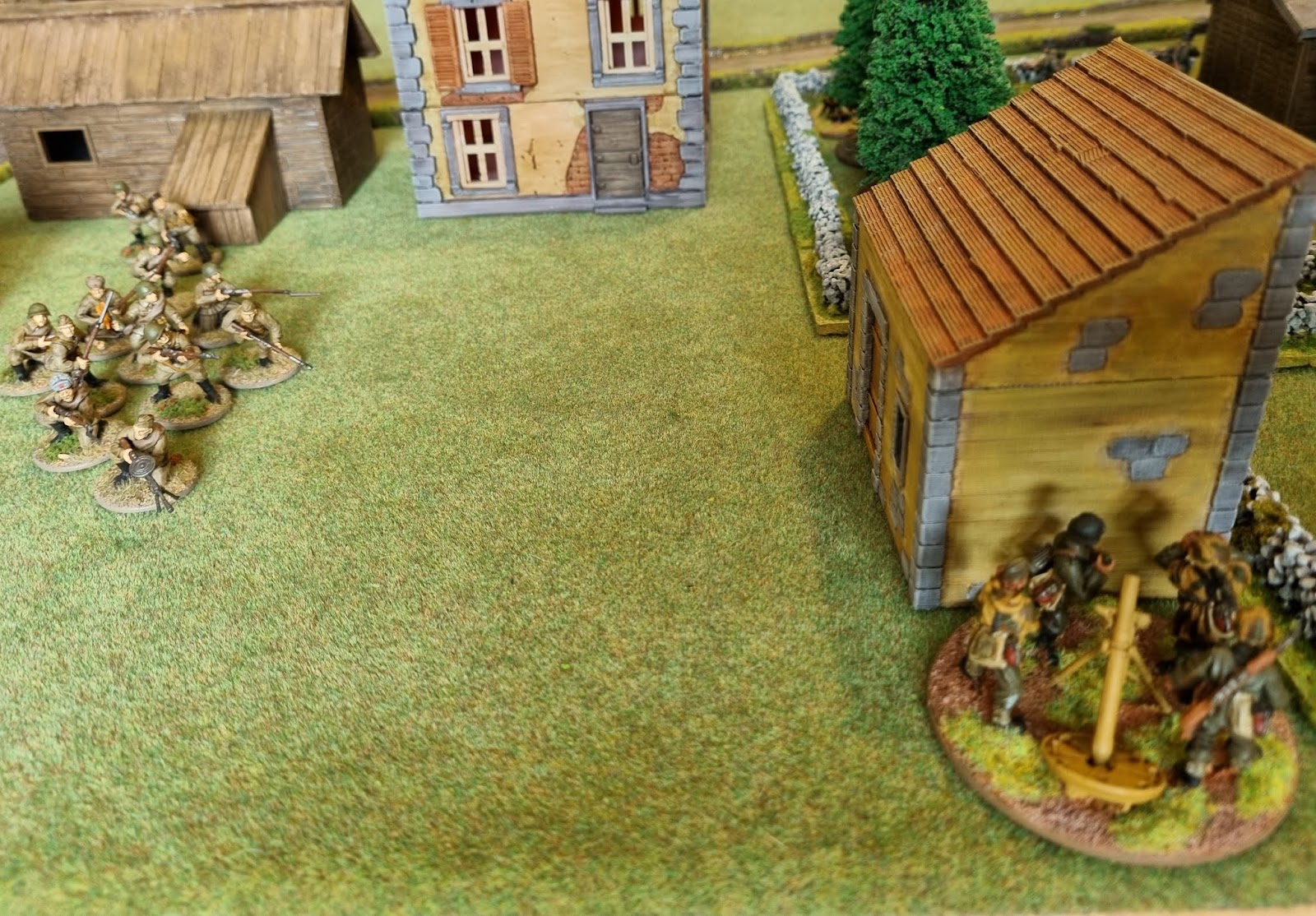 Four Soviet squads had made it across the river into Spartanovka and eight German units had been destroyed.

However, the German flank attack had got three units across the river, despite losing the truck to a tank shell at the last minute. Added to the 10 Soviet units destroyed the final score stood at 13-12.
The narrowest of German victories.
This has to be one of the closest games of Bolt Action I've ever played, and it was also one of the most enjoyable. We could point to at least a dozen moments which would have tipped the balance one way or another.
My MVP has to be the free inexperienced 37mm AA gun which took out two tanks and a sniper (made even better by the fact that Pete 3d printed it for me). The star of the German show was probably the heavy mortar which prevented a T-34 wreaking havoc in their lines.
The next scenario sees my Soviets on the attack against surrounded and outnumbered Germans, low on fuel and low on ammunition.
Seems fair.
Posted by Kieron at 11:08