One of my slowest growing and most niche projects is Freedom Force. The 2002 point-and-click superhero game remains one of the best and most engaging games I've ever played and brilliantly captured the feel of classic comic book adventure.
Having put together a small selection of the heroes and a smattering of villains, I was in a superhero mood and so decided to get them out of the table for a solo game based on one of the original scenarios: Prehistoric Panic. 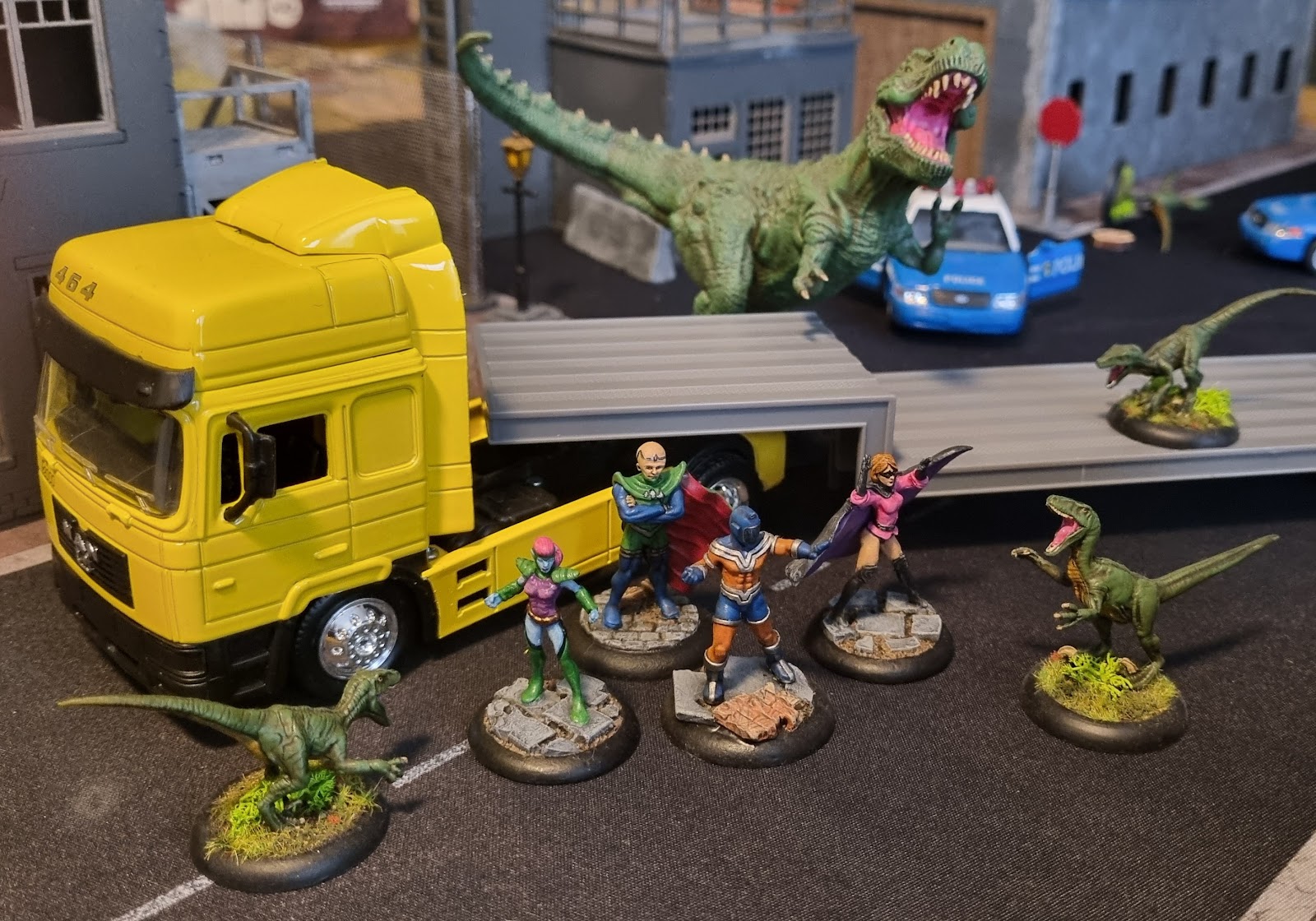 I opted to use 7TV for the game for a few reasons. Firstly, I'd already spent some time a while back making profile cards for my Freedom Force models using the 7TV Casting Agency. Secondly, I would be able to use the free 7TV solo rules, written by yours truly, for the scenario and simply replace the zombies for dinosaurs. 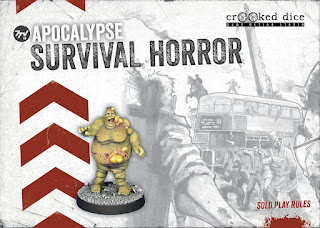 Finally, I have a bee in my bonnet about the idea that 7TV can't be used for superhero gaming. My argument is that it's all about the setting. If your superheroes demonstrate the sort powers that could be shown on 70's and early 80's TV (think The Incredible Hulk or Linda Carter's Wonder Woman) then you're good to go. Hell, you can easily stretch to any fairly low budget effort from later than that (e.g. 2001's Mutant X), just doesn't expect to throw Doomsday against Thanos.
Freedom Force is right in this old school/low level/low budget ball park. 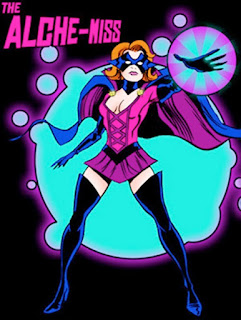 Prehistoric Panic sees the introduction of the mystical character Alche-Miss as she and her new allies , the Freedom Force, try to close a time-portal opened up by a mysterious villain. They team I sent out included Alche-Miss, Sea Urchin and Mentor (who are all available for this scenario in the game) and Microwave (who isn't), standing in for El Diablo, who I haven't managed to find a miniature for yet.
Below you can also see my card for Eve, who's not appearing in this episode. 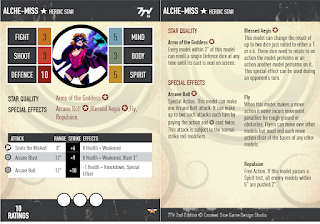 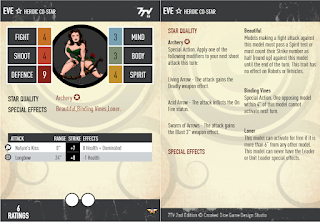 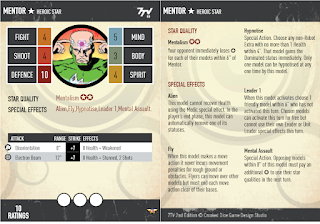 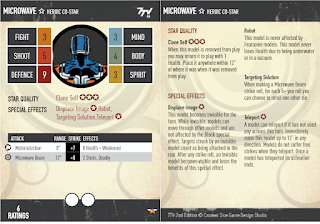 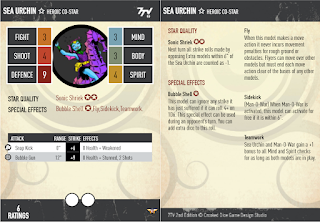 I've pitched the Freedom Force (all custom profiles), alongside 6 Scared Bystanders from the free Scooby Doo programme guide against 6 Velociraptor and a T-Rex from 7TV Pulp. I'm using Pulp as the base set for the game as it totally suits the setting of Patriot City.
Finally, in a slight change to the scenario, I only have 3 spawn points for the dinosaurs, representing the portals, but to balance this, only Alche-Miss is able to close them by taking an action to perform a spirit test. The team deploy on one edge, the portals are in the centre of the other three edges, and the bystanders had to begin within 6" of one of the portals. The dinosaurs were randomly scattered about the board.
And now, time for action... 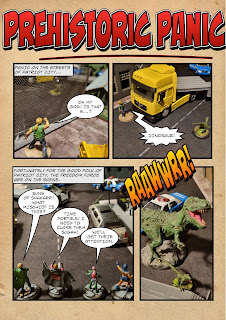 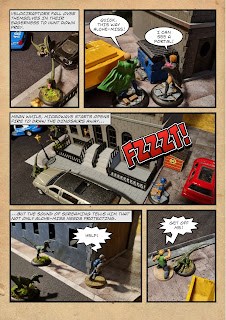 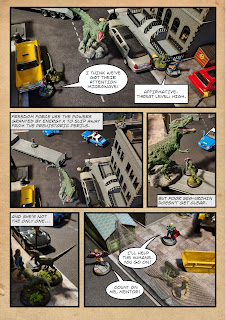 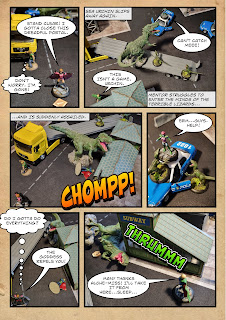 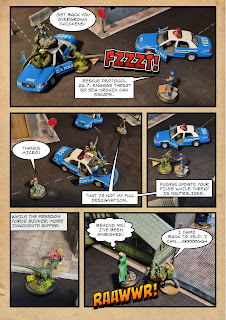 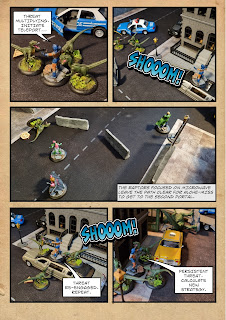 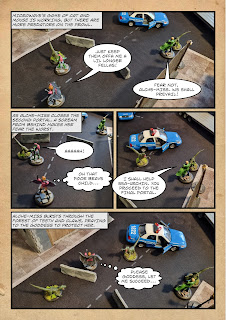 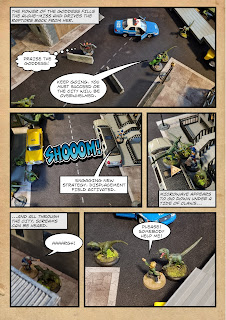 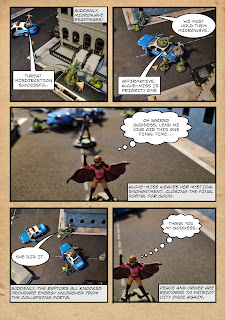 The scenario worked really well as it was touch and go whether the team were going to succeed. I was working on a 3x3 board and Alche-Miss had to really get moving to even stand a chance of getting there in the nine turns the solo rules give her. If I was to do this again, I might start the heroes further on the board, or bring the portals in from the edge, or just make them bigger.
In terms of the profiles, I think I've got them about right. Mentor and Sea Urchin sucked and Microwave nearly broke the game (his teleport and cloning abilities meant he could lead a bunch of the AI raptors away from the action with ease). To be fair to Mentor, his powers weren't really suited to these enemies (raptors have two health points and so are immune to his mind control), and Sea Urchin really needs Man-O-War to be worth taking (as in the game). The bystanders died horribly, but did prove useful as human shields...which is really heroic.
I'm going to have a look at my collection and see what appropriate opponents I can throw at them. I do have Pinstripe's gang, but I'm not sure the solo rules work that well with stars and units. I'm also looking at building up some henchmen to join with Nuclear Winter.
Posted by Kieron at 03:04